Novelist Paul Vidich reflects on the life and legacy of a literary giant.

I never had the privilege of meeting John Le Carré, but I’ve come to know him through his novels, interviews, and now the many moving obituaries. No other writer has had as great an influence on my own work—the plots I design, the sentences I shape, and the characters I breathe life into.

The Spy Who Came in from the Cold had a hypnotic effect on me when I read it in my twenties. Published in 1963, it captured the dark Cold War zeitgeist that followed the erection of the Berlin Wall in 1961. It was a world so real, so true, so compelling that it stayed with me long after I closed the book’s covers. The grim story, its empathetic characters, the clever plot, and the masterful writing changed my way of looking at spy novels. I have read and reread the book to figure out how he pulled it off.

Graham Greene famously called it “the best spy novel I have ever read.” Since then, Le Carré’s stature has only grown. Ian McEwan has said “when the history of the British or English novel is written in the second half of the 20th century, Le Carré’s going to loom really, really large. I don’t think of him any longer as a genre writer, I think he’s a literary writer.”

I got the news of John Le Carré’s death as a late-night, two-line news alert on my iPhone, and I stared, startled, and a hollow opened in my chest. In a season of great pain and anguish, his death was quite personal. Le Carré was gone and he carried his untold stories with him, like grave goods placed in a dead pharaoh’s crypt.  I have read many of his twenty-five novels, but not all of them, so I still can have the fresh pleasure of a first encounter. But his voice is stilled.

In the days that followed the news, I recalled many details about his work that caught my attention and stayed with me. After reading The Spy Who Came in from the Cold, I went right to his next, The Looking Glass War (1965). I found it pallid. Which surprised me and disappointed me. Several years later, I read his first two books, written while Le Carré worked for MI6, the British foreign intelligence service, in Bonn. Le Carré’s birth name, David Cornwell, was denied him by his employer for security reasons so he took up the pen name, Le Carré. Call for the Dead (1961) and A Murder of Quality (1962) are slender books that have none of the urgency, vividness, or Dickensian sweep that appeared in The Spy Who Came in from the Cold and that would find full expression in his later work.

The Spy Who Came in from the Cold was an international bestseller and the first book to remain on the New York Times bestseller list for a year. It marked a boundary for English spy novels by authors like Ian Fleming, Eric Ambler, and Somerset Maugham, whose popular entertainments were characterized by patriotism worn proudly, trust in government, and flirty romances with pretty girls. Le Carré broke the pattern. His novel perfectly matched the moral drift and somber reality of the Cold War. Alec Leamas, the novel’s protagonist, was an anti-James Bond—an unromantic British agent sent to East Germany as a faux defector. A loner, an outsider, and not quite a gentleman. The public was fascinated by this new world and by this new kind of spy who operated on the fringe of civilized behavior, suborning friends, lying for advantage, and nourished by a healthy distrust of institutions.

Years later, I learned how Le Carré came to write the novel. He was stationed in Bonn and witnessed the Berlin Wall’s tragic consequences—border guard shootings, separated families, men and women leaping from apartment windows hoping for freedom. He slept little, worried about nuclear war, and at the time he found himself in a job he didn’t like and living in a fraying marriage. In that political and personal vortex, he said that he had “this notion of a story about this beat-up agent runner trying to get his agents out of the East. I wrote it over five weeks—I used to write on the ferry to Bonn—and then is was done.”

When I read this comment in his 1989 Vanity Fair interview with Stephen Schiff, I knew the novel’s urgency came from a vein he had opened in his wrist that bled onto the page. At the age of thirty-one, he had found a story worth telling.

Celebrity and huge sums of money followed the novel’s success, but so did exhausting publicity appearances, divorce, and the self-doubt that accompanies instant success. Three more novels followed in the next eight years, but none sold as well or was as kindly reviewed. A reader who stopped with Le Carré’s eighth book, The Naïve and Sentimental Lover (1971), a pretentious romantic story about a ménage à trois, and his biggest flop, might have thought he was a one-hit wonder. But then in 1974 he returned to the spy genre with Tinker Tailor Soldier Spy.

George Smiley, a minor character in his first three novels, became a central figure in a manifestly bigger novel with diverting complexity that depicted the modern game of espionage. George Smiley is a pudgy, frequently cuckolded anti-hero who looks like a shy and miserable clerk in a Fleet Street bank. In fact, he is one of the MI6’s best intelligence officers whose pathetic demeanor conceals a brilliant mind and stout heart. A man who goes unnoticed in a restaurant because he is amenably ordinary.

The novel became a bestseller. Le Carré stayed with the spy genre for the rest of his career. He discovered in the spy novel a laboratory in which he could lay bare the intricacies of human nature. In his 1989 Vanity Fair interview, he was candid, saying: “A spy story is not just a spy story. It can be a love story, a story about engagement and escape, about the search for institutional integrity. And because it is also a spy story, I have culled a much bigger readership than if I had taken those themes and written about a suburban English housewife.”

Schiff commented: “Reading him, we discover that we are all, like his secret agents, dissemblers selling our ‘covers’ to the world. We all have something to hide,” and we all want to align ourselves with a cause or a passion.

Le Carré’s distinction and originality is that he used the conventions of the spy novel for the purposes of social criticism. The British intelligence bureaucracy and the men (and they are largely men) represent the social attitudes and vanities of a certain class of Englishmen. They marry, cheat, divorce, spy and play their games of political and sexual betrayal. Le Carré used espionage as Conrad used the sea and Kipling India, as an exotic world in which to explore the inconvenient truths that exist in a democracy that finds it hard to balance openness with the need to keep secrets.

Intelligence agents in this world often act as legally sanctioned criminals. Lies are told in the service of truth, friends suborned in the name of national security, and extrajudicial murder qualifies as justice.  We are fascinated by these contradictions and are entertained by the inherent hypocrisy.

When I was writing my first novel, An Honorable Man, I struggled to find a voice for my main character, George Mueller. The book, inspired by the case of my uncle, Frank Olson, who was murdered in 1953 while working for the CIA, explores the dark side of Cold War spying. I found the right voice by listening to the voices in Le Carré’s work. I am indebted to him for that. I recently looked at my next novel, due out next month, which is set in Moscow in 1985 at the end of the Cold War, and I realized that it is, quite unconsciously, a homage to the Alec Leamas character.

Le Carré died at age 89, after writing 25 novels over six decades, but eight of those novels were written after the age of 70 and the last one, Agent Running in Place, when he was 88. As inspiring as his brilliant writing is that he remained a prolific author and powerful voice when many of his contemporaries put down their pens. 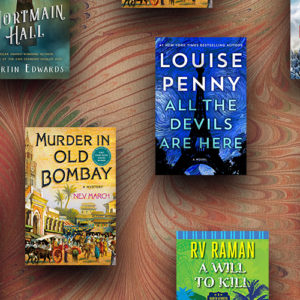 In a year where pretty much everything's gone topsy-turvy, it can be a revolutionary act to simply follow the rules. Traditional...
© LitHub
Back to top