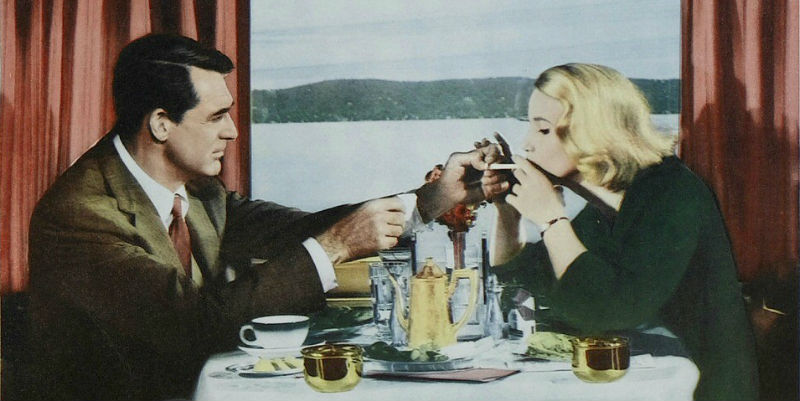 There’s a fascinating moment towards the beginning of Alfred Hitchcock’s adventure-thriller classic, North by Northwest. Ad exec Roger Thornhill, played by Cary Grant, is running late for an appointment at the Plaza Hotel. Hitting the city streets, flustered secretary in tow, he shoves her into a cab, telling the dark-suited businessman who was about to get in, as he’s pushing his way past, “I beg your pardon, I have a very sick woman here, you don’t mind do you?” The businessman looks horrified he even deigned to exist at that moment. “Well no, I mean…perfectly alright,” he sputters, immediately ready to hail the next cab. His secretary scolds him for the lie. “…I made him feel like a Good Samaritan,” Thornhill argues. “…In the world of advertising there’s no such thing as a lie. There’s only expedient exaggeration…”

It’s a fabulous, subtly comic moment of deception, which immediately speaks to our hero’s minor selfishness (and slight, slanted sense of morals, perhaps). Had that moment happened today, there would have been a heated exchange, insults, possibly punches thrown, it would have been caught on iPhone cameras, posted on YouTube, there would be have been arguments about who really had the right to the cab on Twitter, with trolls and Russian bots weighing in, and everyone would have received death threats.

But wait a minute, what am I even saying? People don’t even get into cabs in New York City anymore! Today, Thornhill would have most likely called an Uber, and sped off with no extraneous conversations or human interactions required. Once Thornhill arrives at the Oak Room to meet his friends, he calls the page over at just the wrong time to get a message over to his secretary, and the two goons standing off in the corners think he’s someone named George Kaplan. The epic case of mistaken identity gets triggered by the tiniest twinge of wrong timing, a cruel twist of fate. It wouldn’t have even happened if texting had existed yet. And Thornhill’s life as he knows it…is pretty much over.

North by Northwest exists in and out of time. There is an effervescent dreaminess to the movie, despite the high stakes involved; it’s Mad Men but with more swirling dust and desperate running; a twitchy caper glossed by swanky hotels, suburban mansions, romantic, high-tension train rides, and a much-abused gray suit that changed the course of men’s fashion. The title itself is a fluffy piece of nonsense, vaguely alluding to the direction Thornhill travels. Kidnapped by the homicidal goons and taken to the stately home of Lester Townsend, Thornhill comes face-to-face for the first time with Russian spy Phillip Vandamm (a smarmy and menacing James Mason), who believes Thornhill is an American agent on his tail. Nothing Thornhill says can convince him otherwise.

Time and place bends around the action. Thornhill was in midtown Manhattan with car horns and rush-hour pedestrians seemingly minutes ago, and now he’s in a quiet cavernous home surrounded by trees and empty fields with bad guys who are wrapped up in a sinister parlor game of pretend—inhabiting a house they do not own, and people they are not (Vandamm is indeed not Townsend, the United Nations diplomat he claims to be). Vandamm’s goons force a bottle of bourbon down his throat, stuff him in a car, and Thornhills’ evening ends in a literal drunken cliffhanger, as the car he desperately tries to maintain control of teeters over steep bluffs with waves crashing below (on Long Island!)

Hitchcock loved his cinematic set pieces. Not much later, in the legendary “crop-duster” scene, Thornhill is standing on a John Steinbeck-ian Indiana side road ducking from attack planes, and the film’s climax has him climbing up the face of Mount Rushmore. Does Thornhill ever wind up somewhere that isn’t large, busy, and monumental? Grand Central Station, The United Nations, Chicago Midway Airport, a stuffy art auction, and a packed tourist cafeteria figure in to the plot as well. Vandamm’s swank, evil-looking “lair” that Thornhill infiltrates is directly over Mount Rushmore. Vandamm probably smiled through his teeth when he heard about the listing, and purchased it sight unseen.

Along the way, escaping by train to Chicago while being chased by both the authorities and the bad guys, Thornhill meets (and falls hard for) the beautiful Eve Kendall (Eva Marie Saint), and the two develop serious chemistry very quickly, which marks a clever contrast to the unhinged cat-and-mouse game developing between Thornhill and Vandamm. But Eve is not who she says she is. Indeed, the entire movie seems to question the very nature of identity—and the idea of morality. Who is Eve Kendall? Whose side is she on? Why was Vandamm pretending to be Townsend? Why does everyone think Roger Thornhill is someone named George Kaplan?

Thornhill’s identity (and arguably his reality, as well) gets shredded because he stumbled into a government plot to entrap Townsend. The idea was to create a fake identity—George Kaplan—to throw off the Russian spies (who are smuggling microfilm into art objects). We never find out what’s on the microfilm, but that’s a trademark Hitchcock MacGuffin: a plot device that’s never explained. Why were Nazis stuffing wine bottles with uranium two years after the end of World War II in Notorious? It doesn’t matter, we can’t overthink it. There’s obviously never anything good on microfilm. It’s the midst of the Cold War after all.

Article continues after advertisement
The charismatic Roger Thornhill, as well as the costuming, fast-paced action, romanticism, and general cinematic flair would become a template for all the James Bond films to come throughout the following decades.

The American government agents involved in the scheme, led by someone we only know as The Professor (and he sure looks like one, too) are comically indifferent to Thornhill’s fate, callous as can be, and remarkably defeatist. Thornhill helps their mission by continuing to thwart the villains, and they only come to his aid once he endangers their work. Here we have the moral question posed by Hitchcock: is one man’s life worth saving over so many more if a nefarious plot against the country can be stopped?

Despite all this, the movie has a pulsing strain of dark humor throughout. Thornhill’s own mother has a hard time vouching for his good character, sniffing and rolling her eyes, at the Glencoe Police Station following his drunk driving arrest, and she pointedly asks Vandamm’s goons, while trapped in an elevator with them back at the Plaza Hotel: “are you really trying to kill my son?” Thornhill has a wry sense of humor, continuously wise-cracking to the wrong people at the wrong time in the face of possible imminent murdering. And he stages an uproarious escape during that Chicago art auction. But he remains a cipher throughout. His only real backstory is that he’s been divorced twice, admitting to Eve Kendall that his wives found him dull.

The charismatic (although slightly blank) Roger Thornhill, as well as the costuming, fast-paced action, romanticism, and general cinematic flair would become a template for all the James Bond films to come throughout the following decades. The story (the original screenplay, chock full of zingers, is by Ernest Lehman) was supposedly inspired by Operation Mincemeat, the World War II deception mission. British Intelligence successfully distracted the Axis from their planned invasion of Sicily by transforming a corpse into a dead Royal Marines officer, complete with fake documents. Ian Fleming himself, naturally, was involved.

There’s another notable element to North by Northwest. There were Hollywood production codes back then, and homosexuality could not be openly depicted onscreen. Martin Landau, playing Leonard, Vandamm’s primary henchman, is one of the first (if not the first) true gay characters depicted in a major motion picture, and naturally, it’s as someone psychopathic. It’s subtle; his “jealousy” in regard to Vandamm’s wavering affections (Vandamm is also romantically involved with Eve in a deliciously nasty triangle) could easily be mistaken for a deep-seated loyalty to his boss, or hardcore commitment to their cause, whatever that is. But it’s a fascinating quirk to the movie. Landau, an Actors Studio alum, claimed he had a subversive ball playing with this idea for his character.

That one small aspect of the film was the first seed in which North by Northwest, and Hitchcock in general, became an inspiration for my second Young Adult novel, Swipe Right for Murder. I wondered how the events of this film, or a film in the vein, would unfold (or not unfold) in the modern era, and how I could upend all the classic cinematic tropes. Instead of having homosexuality be a whisper on the wind, the novel instead is unabashedly queer, as is its funny, sharp, and sensitive main character (who is anything but a blank). Seventeen-year-old Aidan Jamison is as out as they come, sexually active, a little self-destructive, with a troubled past, revealed layer by layer, throughout the course of the story.

Fate plays its hand here, too. One wrong swipe on a hook-up app and Aidan wakes up next to a dead guy in a 5-star Manhattan hotel and suddenly everyone thinks he’s someone named Mr. Preston. Before he knows it, he’s on the run from the Feds, cold-blooded killers, his high-strung family, and in a way, himself. Entangled with a cyber terror group called the Swans whose pro-LGBTQ agenda Aidan can’t help but sympathize with, he has some serious moral choices to make. The concept of identity is central to any teenager, since we’re all trying to figure out who we are, and who we’re going to be, at that age. And while North by Northwest is innocently analog (pads, pens, phone booths, telegrams, cabs) the world of Swipe Right for Murder is ferociously digital. North by Northwest could not have taken place in the digital age, and Swipe Right for Murder could only have taken place in the digital age. At every stage of his waking, neon-lit nightmare of a spring break, Aidan is either helped or hindered by technology.

Ironically, we may still be losing The Cold War. While the Russians may still be up to their dark mischief 60 years later, in the world of Swipe Right for Murder, when your iPhone battery slides into the red, that could mean the very difference between life and death. 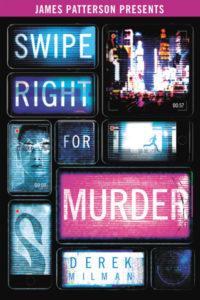 Derek Milman has worked as a playwright, screenwriter, film school teacher, DJ, and underground humor magazine publisher. A classically trained actor, he has performed on stages across the country and appeared in numerous TV shows, commercials, and films. Derek currently resides in Brooklyn, New York, where he writes full time. Swipe Right for Murder is his second novel for young adults. 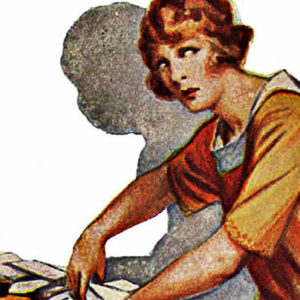 When I was working on my first suspense standalone and writing an “On Crime” book review column for the Boston Globe,...
© LitHub
Back to top