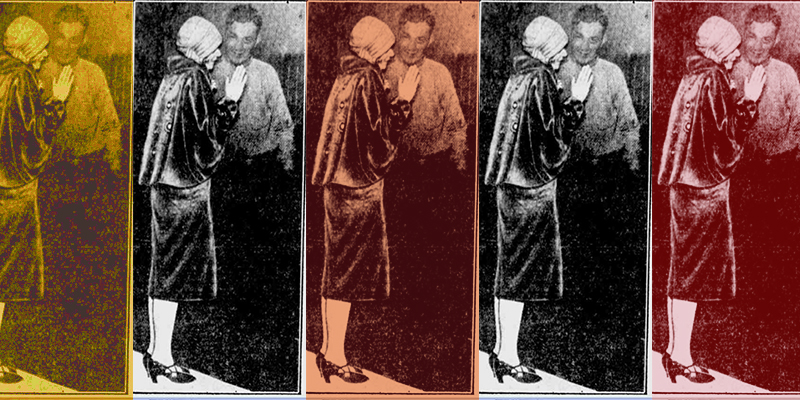 Meet Tiger Girl and Kid Candy, in the days before a heist.

Each member of the gang had a job. Margaret Whittemore, soon to be known all over America as “Tiger Girl,” knew exactly what to do. And she played her role to the hilt.

Early on the morning of January 11, 1926, Margaret Whittemore, not quite twenty-two years old, rose just before dawn. Daylight would reveal a sky as dull as a mollusk and gray as concrete on this early winter day, but at this hour, as the sky slowly brightened, the lights of the streets of Manhattan still twinkled outside the window. Most days Margaret and her husband, Richard Whittemore, rarely opened the curtains before noon, if at all. They stayed out late and awoke even later, often stumbling home at four or five or six in the morning, after spending the early morning hours at the Club Chantee, where over the sound of a jazz band Richard laughed and held court long into the night.

But this day was different. In fact, for the last several days they had stayed at home and turned in early to make sure that on this day they would awake clearheaded and alert.

It was a big apartment—two bedrooms, two baths, with a nine-foot beamed ceiling, formal dining room, eat-in kitchen, and large entry foyer, one of half a dozen or so apartments on the twelfth floor of Chester Court, a fancy, brand-new fourteen-story building at 201 West Eighty-Ninth Street on Manhattan’s Upper West Side.

Margaret liked nice places, and so did Richard. They’d never had much growing up in Baltimore and were making up for it now. There had been nothing wrong with their previous place, a fine town house on West Eightieth Street, but this place was nicer, newer, bigger, and had more room, more class, more everything. Advertised as “High Class Apartments for Particular People,” Chester Court was a full-service building, with staff available to fulfill every whim. It was almost like a hotel, the housekeeping apartments already partially furnished, with electric refrigerators, stoves, and ranges. Even the closets had their own electric lights. The lobby was appointed in gleaming pink marble trimmed in gold gilt, and a doorman out front held the door for Margaret every time she entered and exited the building. Whenever she needed a taxi, he would stand on the curb, blow a whistle, and wave, then open the door and help her in.

He treated her with respect, and the way the building’s staff spoke to her, saying things like, “Yes, Mrs. Vaughn. Of course, Mrs. Vaughn. Right away, Mrs. Vaughn,” must have made her feel good—classy. She was younger than most of the other women in the building, who were wives of serious people, attorneys and architects and stockbrokers, and they jealously might have wondered how someone so young seemed to have so much.

Chances are the apartment was cluttered after a rare stretch of nights in, stacks of magazines spilling over the side tables. Richard favored adventure stories in pulps like Argosy and Dime Detective. Margaret liked the movies and, like other young women at the time, probably favored popular magazines that catered to her generation, glossy titles like Photoplay, Motion Picture Classic, and Vogue and pulps such as Dream World, True Confessions, and Flapper Experiences, all of which presented fantasies now close enough to touch. The ashtrays were full of cigarette butts—Richard was a chain-smoker—and a radio sat on the table. Their little dog, a brown and white spitz mix named Bades, a gift from Richard to Margaret, bounced back and forth. The dog was important to her. She’d had one before, a poodle, but after the couple were arrested in Philadelphia, police had taken the dog away. Margaret’s clothes were still packed and hanging in oversized trunks, as if the Whittemores had either just arrived or were preparing to leave. In fact, their life at Chester Court was the first time, really, the pair had stayed in a place of their own, by themselves, for long enough to live together like a regular couple.

That was what made their little dog so important. When Richard had bought it for her shortly after they moved in, it was a sign that maybe their life on the run was coming to an end, that they could in some way settle down.

Margaret and her husband still kept nearly all their belongings in several wardrobe trunks, clothes as well as jewelry, some cash, and a gun, just in case. Even that was a risk, but it was easier to dump one gun in a hurry than a whole stash. At any moment, the whole gang might have to bolt.

Margaret was a flapper, a modern young woman. Her short blond hair was cut in a smart and daring version of the “Eton Crop,” a hairstyle enhanced by a finger wave that curled just over the ears, like the models in the magazines, exposing the porcelain skin of her bare neck and leading the eye to the perfect boyish silhouette created by her nearly flat chest and slender figure.

Because it was a cold winter day and she had a job to do, she would have passed over the smart and sexier outfits that she wore at night, dresses made of crepe de Chine or taffeta and trimmed in silk or satin. For daywear, she usually selected something more conservative, like a ready-to-wear ensemble suit, sophisticated but sharp, and a pair of stockings. She didn’t wear the cheap rayons that were often so shiny that they had to be dulled with skin powder. She could afford real silk now. Her dress lingered just below the knee.

She applied her makeup carefully, her nails perfectly manicured.

Her jewelry box, now sitting open, was like a small treasure chest from a children’s book, all gold and diamonds and platinum and pearls. And there would soon be more, she knew. In the past few months, Richard had given her almost everything she wanted, and if everything went well, there would be even more coming. This was nothing like the way she had lived before, when he was in prison and she worked for the phone company or as an artist’s model and had to wear the same outfit nearly every day, or when they were on the run and Richard had to dye his hair to avoid being identified.

While she dressed, Richard also prepared for the day. He splashed his face with water and then drew a straight razor over his neck and cheeks, where a handful of scars hid beneath the stubble of a face both hard and soft. He had a job too, and it was important to look the part, to blend in among the people on the street in New York’s Diamond District.

You couldn’t be too careful.

Women were marching on Washington, DC, demanding equal rights, and Fall River High School in Massachusetts had just outlawed jazz, calling it a “travesty of music.” Richard mostly read the papers for the baseball and boxing news. But he also paid attention to the automobile advertisements in particular one for the car he would soon buy, the 1926 Cadillac Imperial Suburban Sedan, series 314, with a list price of $3,435, capable of seating seven, and with a ninety-degree V-8, one of the most powerful engines available. It was a fast car, much faster than the four-cylinder Fords and Chevys used by the police and even faster than the car he already owned, a pricey Locomobile that now sat in a nearby garage. Truth be told, given his line of work, in some ways the armored edition of the Cadillac made more sense. It was the perfect car for “commercial” purposes like bank transfers, but everybody also knew it was bought only by top-of-the-line rumrunners. For a guy on the lam, the Suburban model attracted less unwanted attention.

In a few days he would have one, after paying for it with cash.

Richard Whittemore—Margaret usually either called him Dick or referred to him by his middle name, Reese, or sometimes, when they were out, by John or whatever other alias he was using at the time—was of average height, five-foot-seven, but “strongly built.” His face was wide, with sleepy gray eyes, heavy lips, and a slightly flattened nose that said he could take a punch and hinted at a life that might have had a rough beginning. But dressed in his tailored and sharply creased pinstriped pants, with a crisp silk shirt over his T-shirt, suspenders, a tie and matching jacket, topped off by a “smartly cut” overcoat, he did not look like someone who had already killed at least three men and maybe four or five more. Or like someone who in another day would spend hours in an opium den on Mott Street, or who later that morning would smash a gun against the skull of a man and then rob him of hundreds of thousands of dollars’ worth of uncut diamonds in the middle of the street in broad daylight. That crime would make the front pages and eventually put both his picture and Margaret’s in newspapers from Long Island to Los Angeles.

The tabloids would call Margaret “Tiger Girl,” and Richard “the Candy Kid.” Together they would become real-life celebrities, almost movie stars, as familiar to readers as the smart young couple Boots and Rod Ruggles in the popular comic strip Boots and Her Buddies.

GLENN STOUT is a freelance writer, author, and editorial consultant and has served as series editor of The Best American Sports Writing since its inception. He is the author of Young Woman and the Sea and Fenway 1912, and has collaborated with Richard Johnson on Red Sox Century, Yankees Century, The Cubs, and The Dodgers. Stout has lived in and around Boston for 20 years, and currently lives in Vermont.

What Happened to the Actors Who Were Performing the Night Lincoln Was Shot? 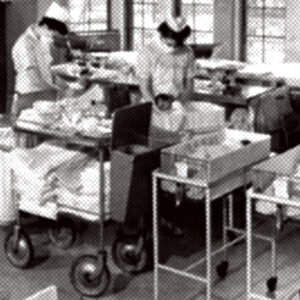 My wife and I completed our family through adoption, so perhaps it was inevitable that my debut novel, Other People’s Children,...
© LitHub
Back to top