Let me be up-front about this: I am a story nerd.

I love words and books and storytelling, and I gush about them with the energy level of an excitable first grader who just saw the Best. Movie. Ever.

So when CrimeReads asked me to talk about balancing worldbuilding and action, I jumped at the chance to revisit a subject that’s near and dear to my heart. After all, I write noir with a twist of magic and a disco chaser, and I know firsthand how important it is to find that precarious balance. Because worldbuilding without action is boring, and action without worldbuilding is confusing.

I don’t know if I always get that balance right. But I do know that I spend an almost embarrassing amount of time thinking about how I can do it better.

The term “worldbuilding” conjures images of authors spending countless hours working out the intricacies of alien anatomy and constructing their own fantasy languages. And that stuff is totally cool (he said with the flapping arms of an excitable first grader). But the truth is, every story needs some amount of worldbuilding.

No matter where or when a story is set, the vast majority of people won’t have direct experience with it. An American high school may seem mundane, but consider the radically divergent worlds Starr Carter is forced to navigate in The Hate U Give. The same is true of the super elite in Crazy Rich Asians or the poverty-stricken Ozarks in Winter’s Bone. Each novel must establish the physical, temporal, geographical, and societal setting of its story, because for many readers it’s an unknown.

Luckily for writers, readers want to hear about the unknown. They want to feel what it’s like to fight monsters, solve murders, stand up to bullies, or marry a secret billionaire. Solid worldbuilding makes characters feel more real and gives readers a glimpse into an unexpected and unknown experience.

But it’s not easy to do this, especially for stories with worlds complicated by supernatural forces or extremely unusual settings. How can we possibly convey everything that defines a world or era without dumping an encyclopedia’s worth of information on the reader?

We set a trap.

The first step is to streamline the delivery of worldbuilding info.

Stopping a story in mid-stream to elaborate on a bit of worldbuilding risks losing the reader’s attention. It can be done – Umberto Ecco’s Island of the Day Before is one example. But an easier path is to blend worldbuilding into the characters’ interactions with the people and world around them.

The fancy-pants name for this is diegetic action. (Diegesis is a whole rabbit hole of its own, but for the sake of this conversation, it’s simply the world of the story; in film, diegetic sound is when the soundtrack emanates from in-world, such as a song on a car radio.)

A great example of this type of worldbuilding are the Jim Henson films Labyrinth and The Dark Crystal, where entire ecosystems are implied through brief glimpses of various creatures chasing and devouring each other in the background.

Diegetic action is powerful because the focus on the action, and the worldbuilding is absorbed almost unconsciously. Plus, with every action we’re seeing the characters’ reactions. And that tells the reader what is or isn’t normal for this world.

Sometimes, something shocking to the reader is commonplace to the characters of a novel. This could be a social inequity, or a bit of magic. In my Carter Archives series, I plunge readers into a fantasy world loaded with alien creatures and 1970s technology. (As an aside, I’ve never felt so old as when I realized that to some readers rotary phones were more of a novelty than monsters.)

The series protagonist, Detective Carter, works alongside plate-headed creatures with two mouths and a set of mandibles. When Carter interacts with them like any other co-worker, it shows the reader that it’s normal for this world. But when Carter walks onto a gruesome murder scene and encounters an overwhelming scent of cinnamon that leaves him ravenous, it’s shown as anything but normal. The reader knows what to see as mysterious, and begins to pick up on the worldbuilding yet to come.

Of course, characters interact with the world around them constantly, and each author needs to find the level of worldbuilding that they’re comfortable with. Here again, I’m driven by my inner first grader.

There’s a popular metaphor that worldbuilding should be like an iceberg: a small section on top of the water that the reader encounters, backed up by a massive amount of thought and research below it. For some writers that’s fantastic. But for writers like myself, it’s easy to feel more like the Titanic when we look at all that work.

Remember, I’m an excitable first grader! I can talk for hours about the sewer system in my fantasy city. I love doing deep dives into a specific element because it’s the coolest thing EVER. But ask me to pull back and create the full worldbuilding tapestry, and it starts feeling like homework. Next thing you know, I’m sneaking out to the playground to play dodgeball.

Instead, let me introduce you to something I call the Inverted Bucket.

Imagine taking a plastic bucket and plopping it upside down into a body of water. Trapped air will cause the closed bottom of the bucket to bob above the waterline, while the sides extend below. To a casual observer, that looks an awful lot like an iceberg. They’ll see the top, and they’ll sense that shadowy bulk beneath the surface.

But you know what? That sucker’s hollow.

Readers are smart, and as long as they trust the author to deliver in the end, they’ll fill in the gaps on their own. At this point, imagine eight-year-old me excitedly waving my arms and devouring cotton candy, because now the reader is actively participating in the storytelling. Once the reader is this engaged, we’re ready to prove to them that we can deliver.

As readers learn about the world, authors can deliver on our promises by showing the logical results of the worldbuilding. If your book stipulates that teleportation exists, the reader will think, Okay, no more airlines or hotels. Confirm that thought, but go one step further by pointing out that luxury hotels and resorts would be thriving, because they’re a destination, not a stop on the way. Better yet, show what teleportation would mean for flash mobs, or how New Orleans reacts to tens of millions flooding in from all over the world for Mardi Gras? Show that a world with teleportation needs a massive clean-up industry, and you’ll send the reader a signal that this world is viable and thought-out.

Once you’ve set up your inverted bucket (or iceberg), established the normal, and proven that you understand the world you’ve created by delivering logical solutions, you’ll establish a level of trust with the reader.

And then you do that most writerly of things: walk them into a bear trap.

Humans are fantastic at finding patterns! By giving your readers hints and clues and letting them see the overall shape of the world you’ll have them beginning to make connections and engage mentally with the world and the actions of your characters. With every connection the reader makes, they’ll increasingly want to know if they’re right. And that’s your worldbuilding trap.

Because once the reader desperately wants confirmation that they’ve figured out how this world works, you can drop in all the worldbuilding you like, and the reader will love it! At this point you’re not asking them to wade through backstory, you’re delivering the answers that they’re dying to know.

Now, there are a ton of qualifications and exceptions to these broad strokes. But overall, that’s this excitable first grader’s solution to balancing worldbuilding and action. Create only as much of the world as you need, imply the wider world through diegetic actions, build up your reader’s trust, and then make them beg to know more about the world.

Now if you’ll excuse me, I have to run around in circles and burn off the giddy sugar rush of talking about storytelling. 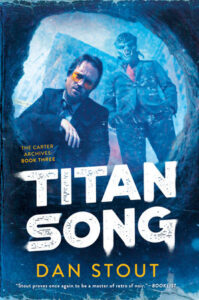 Dan Stout writes about fever dreams and half-glimpsed shapes in the shadows. His fiction draws on travels throughout Europe, Asia, and the Pacific Rim as well as an employment history spanning everything from subpoena server to assistant well driller. Dan's stories have appeared in publications such as The Saturday Evening Post, Nature, and Intergalactic Medicine Show. His latest novel is Titan Song.

The Hidden History of Women and the IRA 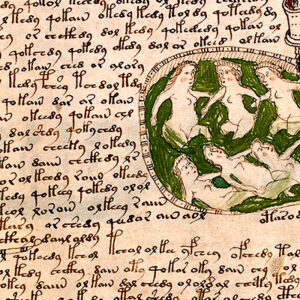 The most famous cryptic manuscript of the medieval period is—as far as we know—written in a unique language that to this...
© LitHub
Back to top