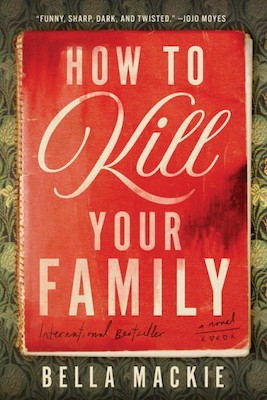 The following is an exclusive excerpt from How To Kill Your Family, by Bella Mackie. In the following passage, we encounter a woman who has killed many, but is now in prison for a notorious set of crimes she swears she did not commit. Bella Mackie is a freelance journalist and columnist at Vogue UK. Previously, she was a commissioning editor at the Guardian and deputy editor at Vice News. She has also written for Vogue, the Daily Mail, Vice, the Guardian, Stylist, and GQ. She lives in London.

Limehouse prison is, as you might imagine, horrible. Except maybe you can’t imagine it, not really. There are no games consoles and flat-screen TVs, as you have surely read about in the newspapers. There’s no friendly communal vibe, no sisterly trib—the atmosphere is usually frantic, hideously loud, and it often feels as though a fight will break out at any moment. From the beginning, I’ve tried to keep my head down. I stay in my cell as much as possible, in between meals that could optimistically be described as occasionally digestible, and attempt to avoid my roommate, as she tiresomely likes to be called.

Kelly is a woman who likes to ‘chat’. On my first day here fourteen long months ago, she sat on my bunk, squeezed my knee with her horribly long fingernails and told me that she knew what I’d done, and thought it was fantastic. Such praise was a pleasant surprise, given that I expected an onslaught of violence as I approached the looming gates of this shabby place. Ah, the innocence of someone who only knows about prison from watching one fairly low-budget TV drama. From this initial introduction, Kelly decided that I was her new best friend, and worse, a trophy cellmate. At breakfast, she will bustle up to me, linking arms and whispering to me as if we are in the middle of a confidential discussion. I’ve heard her talking to other prisoners, her voice dropping to a stage whisper, as she intimates that I’ve confessed all the details of my crime to her. She wants leverage and respect from the other girls, and if anyone can provide her with it, the Morton murderer can. It is immensely tiresome.

I know I say that Kelly professes to know all about my crime, but perhaps that diminishes my deeds somewhat. To me, the word crime sounds shabby, inelegant and commonplace. Shoplifters commit crimes. When you go at 35 mph in a 20-mph zone in order to get a tepid latte before you start another dull day at the office, you’re committing a crime. I did something much more ambitious. I conceived and carried out a complex and careful plan, the origins of which were set in motion long before the unpleasant circumstances surrounding my birth. And given that I have so little to do in this ugly and uninspiring cage (one misguided therapist suggested I attend a spoken word class, and I was gratified when my mere expression ensured that she never made such an offer again), I have decided to tell my story. This is no easy task, given that I have no state-of-the-art laptop such as I am used to. When my lawyer recently presented me with some tentative light at the end of this tunnel, I felt like I should mark the time I’ve spent here and write down some of what I’ve done. A trip to the canteen provided me with a thin notepad and a tired pen – taking £5 off my weekly spend of £15.50. Forget magazine articles breezily suggesting you save money by scrimping on takeout coffee, if you really want to learn to budget properly, spend some time at Limehouse. The writing might be pointless, but I must do something to ease the stultifying boredom of this place, and I’m hopeful that Kelly and her interminable group of ‘ladies’, as she insists on calling them, will stop asking if I want to watch reality TV in the rec room with them if I seem intent on a task. ‘Sorry, Kelly,’ I will say, ‘I’m writing important case notes up for my appeal, let’s talk later.’ I am confident that the merest hint that I might tell her some juicy nugget about my story will have her tapping her nose like a ludicrous character in a Dick Francis novel and leave me to it.

Of course, my story is not for Kelly. I doubt she’d have the capacity to understand what motivated me to do as I did. My story is just that—mine—though I know readers would lap it up if I ever published it—not that I ever could. But it’s nice to know that people would pore over it nonetheless. It would be a bestseller, and the masses would rush to the shops, hoping to know more about the attractive and tragic young woman who could commit such a terrible act. The tabloids have been running pieces on me for months now, the public doesn’t seem to tire of the two-bit psychologists willing to diagnose me from a distance, or the occasional contrarian who will defend my actions to outrage on Twitter. The general public are so enthralled by my actions that they are even willing to watch a hastily cobbled together Channel 5 documentary about me, which included a fat astronomer explaining that my star sign predicted my case. He got my star sign wrong.

So I know that people would fall on my words. Without any attempt on my part at an accurate explanation, my case has already become a notorious one. And ironically, that is without anyone knowing about my real crimes. The justice system in this country is a joke, and there is nothing which illustrates that more than this one sentence: I have killed several people (some brutally, others calmly) and yet I currently languish in jail for a murder I did not commit.

I have killed several people (some brutally, others calmly) and yet I currently languish in jail for a murder I did not commit.[/

The crimes I did orchestrate, if known about, would ensure that I was remembered for decades, perhaps even centuries —if the human race manages to hold on for that long. Dr Crippen, Fred West, Ted Bundy, Lizzie Borden and me, Grace Bernard. Actually that displeases me somewhat. I’m not an amateur or an imbecile. I’m someone who, if you saw me in the street, you’d gaze at admiringly. Perhaps that’s why Kelly clings to me instead of punching the living daylights out of me as I expected. Even in here, I retain a certain elegance, and a froideur that those weaker than I desperately wish to break through. Despite my crimes, I’m told I’ve received letters by the sackful, professing love, admiration, asking me where I bought the dress I wore on the first day of my trial (Roksanda, if you’re interested. That terrible Prime Minister’s wife wore something very similar just a month later, unfortunately). Often hate mail. Sometimes mad shit, where the writer thinks I’ve been sending them messages through the air. People seem to really wish to know me, to impress me, to emulate me, if not in my actions then at least in my sartorial choices. It matters not, since I don’t ever read any of it. My lawyer scoops it all up and takes it away. I’ve no interest really in what I represent to strangers sad enough to put pen to paper and write to me.

Perhaps I’m being too kind to the general public, ascribing to them a more complex set of emotions than they deserve. Maybe the reason for such sustained and frenzied interest in my case is best ascribed to Occam’s Razor—the theory that the simplest answer is usually the correct one. In which case, my name will live on long after I am dead for the most prosaic reason of all—merely because the idea of a love triangle seems so dramatic and grubby. But when I think about what I actually did, I feel somewhat sad that nobody will ever know about the complex operation that I undertook. Getting away with it is highly preferable, of course, but perhaps when I’m long gone, someone will open an old safe and find this confession. The public would reel. After all, almost nobody else in the world can possibly understand how someone, by the tender age of 28, can have calmly killed six members of her family. And then happily carried on with the rest of her life, never to regret a thing. 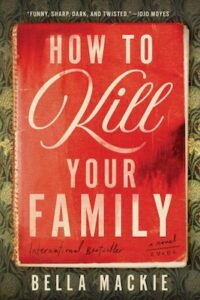 
Bella MackieHow To Kill Your Family 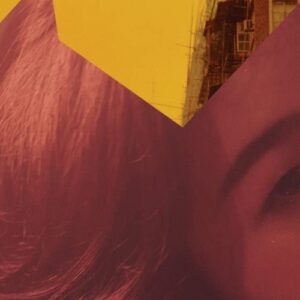 10 New Books Coming Out This Week Another week, another batch of books for your TBR pile. Happy reading, folks. * Amina Akhtar, Kismet (Thomas and Mercer) “Akhtar...
© LitHub
Back to top