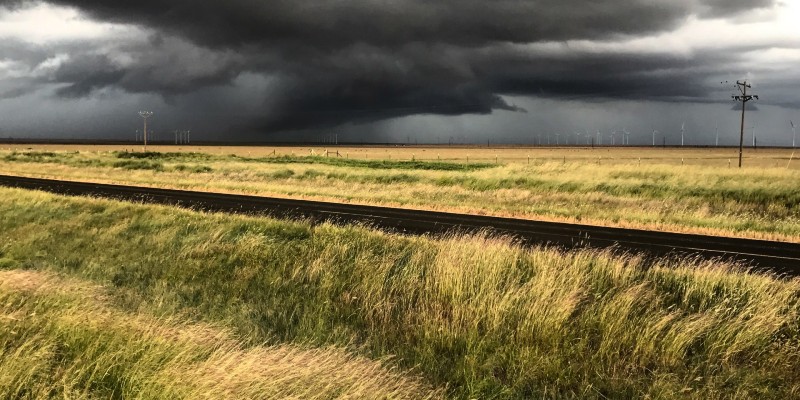 Matthew Cappucci on the anatomy of supercells and the mindset of the people driving America's highways looking for them.

Anatomy of a Supercell

Supercells are the king of thunderstorms. They can tower ten or more miles high, spin like a top, and produce some of the fiercest weather on Earth. They are elegant and destructive, and beautifully terrifying. And they are a force to be reckoned with.

Supercells aren’t like ordinary thunderstorms, which clump together into clusters or gusty squall lines. Supercells are small and potent. A single storm may only be five or ten miles wide, but in that tiny space could be packed destructive straight-line winds, softball-sized hail, flooding rains, and tornadoes. 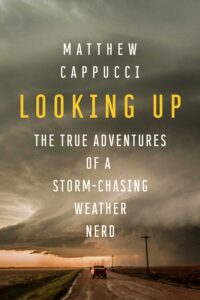 What makes a supercell special is its isolation. While other thunderstorms may compete with neighboring storm cells for resources, supercells exist on their own. That gives them full reign of the surrounding environment—an untapped stockpile of fuel.

All thunderstorms have two main regions: the updraft, where warm, moist air rushes inward and upward, and the downdraft, within which rain (and sometimes hail) crash to the surface and drag down cool air from aloft. Ordinary thunderstorms develop vertically, meaning the downdraft eventually chokes off the updraft, spelling an end to the storm. So-called pulse thundershowers are common in the summertime, and may only last an hour or two.

Supercells are different. That’s because they are sheared, or subjected to a change in wind speed and/or direction with height. That causes them to spin and lean, separating the updraft from the downdraft, a segregation that fosters longevity. Supercells can travel hundreds of miles, hopping state borders and spinning along for hours. During the infamous April 27, 2011, tornado outbreak in the southeastern United States, one supercell spun for seven hours, traveling 350 miles from eastern Mississippi to western North Carolina.

The supercell’s rotating updraft is known as a mesocyclone, an area of spin a few miles across. It can resemble a barber pole, tilted southwest to northeast. Warm, moist air from the south spirals inward, tracing a helix as it climbs high into the sky. Air can race upward at speeds topping 100 mph, suspending hailstones as they grow to mammoth sizes. The strongest supercells can produce hail up to six inches across.

There are three species of supercell thunderstorms, and each offers different delights and hurdles for storm chasers. Classic supercells are the easiest to chase, since they frequently breed tornadoes and adhere to a textbook separation of their updraft and downdrafts. That makes it possible to more quickly locate where a tornado would form.

High precipitation (HP) supercells are enshrouded in rain. That’s because the moisture-loaded storms feature curtains of precipitation that cloak the updraft. Chasing tornadoes in HP environments can be a dangerous game, since they’re often not visible until the last minute.

Low precipitation (LP) supercells are arguably the most photogenic. They exist in drier environments with nothing to obscure the cylindrical structure of the updraft. LPs are sometimes tough to spot on radar and resultantly can be easily underestimated, but can drop baseball-sized hail without yielding more than a drop or two of rain. LP supercells, while visually stunning, rarely produce tornadoes.

At the base of a supercell’s corkscrew updraft lurks the most ominous part of the storm. That’s where a rotating wall cloud, or an eerie low-hanging, rugged cloud appears and sucks air into the storm. It’s from that slowly orbiting mass of smoke-like clouds that tendrils of more concentrated rotation reach to the ground: funnel clouds. Once a funnel snakes to the surface, it’s a tornado.

Some tornadoes are slender, photogenic ropes that dance playfully over open fields. Others are encased in rain, spanning two and a half miles wide and swallowing entire towns. As the rotating updraft churns round and round, it entrains a strip of rain, hail and chilly air and tugs it around to the backside of the storm. This is the rear flank downdraft. That surge of cold, dense air in the storm’s wake can tighten the updraft’s rotation, squeezing and stretching it into a tornado. Sometimes the rear flank downdraft wraps all the way around a tornado, dragging curtains of precipitation around it. These hidden tornadoes are the most dangerous.

If a supercell is bearing down on you, conditions will change on a dime. You may first notice a distant, puffy white cloud roiling with plume-like updrafts, gradually appearing darker as it approaches. Its overhead anvil will extinguish the sun as the winds go still, faint grumblings of thunder interrupted by periodic chirps of anxious birds.

Eventually, the storm draws near, a light pitter-patter of rain quickly becoming a torrential downpour. The rain becomes colder, with fewer but larger rain drops splattering against the pavement. You might notice a raindrop bounce. Bounce? You ask yourself. Seconds later, the rain is replaced by a shower of pea-sized hail, with larger stones becoming mixed in. The sky takes on a phosphorescent green color. We’re still not entirely sure what makes the sky turn green, but it’s probably a product of evening orange light skewed blue through thick columns of precipitation in the tallest clouds. The different colors of light average to green.

The hailstones grow larger, bouncing higher and bombarding the landscape. Marbles become golf balls and tennis balls, hitting the ground and shattering in an explosion of icy shards. Eventually, the darkened skies lift, but meteors of ice still hurtle toward the ground. Some leave craters. They’re now the size of softballs. Only a few are falling, but they’re enormous.

Suddenly, you catch sight of a scuddy cloud about a mile away from you. It seems too low. Something’s not right. All the other clouds seem to be rushing toward it.

Moments later, a pointed cone emerges from the smoky whirl of clouds, aiming at the ground. Below it, a tuft of dust is kicked up. After a few seconds, a full funnel has formed. It’s a tornado—and it’s growing.

If you’re a storm chaser, odds are you’re accustomed to putting some serious mileage on your car. I quickly learned that a single week in May might feature visits to Nebraska, Kansas, Oklahoma, and Texas.

Storm systems move, and that means I do, too. Most days feature three hundred miles or more of driving.

I’ve crisscrossed just about every paved highway in the Great Plains. I know where every speed trap is (well, almost every speed trap), where to find the most scenic picnic spots, and which gas stations have microwave ovens. I always know how many miles it is to the next town with a Chili’s, and I’m never more than an hour away from one of my dozen or so secret stargazing spots.

By day, eight-hour drives can become long and monotonous, especially when I’m alone. If “America the Beautiful” was written proportionally, the amber waves of grain would take up three verses. They’re endless. Playing a one-man game of “I Spy” isn’t overly entertaining when all there is to see is crops and silos, and the forty-six-song playlist on my green iPod shuffle loops every three hours; streaming signals don’t work very well out on the prairie.

will you burn!? read one I passed in 2018, fiery-red text superimposed atop sinister crimson flames. hell is forever screamed another. Others are even more ominous: god is watching. is he pleased? The Bible Belt is full of scary warnings along the side of the highway.

Some are bluntly specific, listing all the things they caution will get you a free pass to hell. Drinking in excess? Yep. Gluttony? Mmm hmm. I always roll my eyes when I see that one, as I’m usually busy plotting my next meal. Sexual immorality? The billboards warn against that, too. Frankly, hell doesn’t sound like that bad of a time. Besides, you have to climb stairs to get to heaven, but there’s a highway to hell. I wonder if that highway has billboards, too.

Once in a while, I pass a special billboard. searching for god? call now! it reads, the silhouette of a 1-800 number emblazoned against a blue sky stock photo. Those are my favorite. I always call in the off chance that God picks up that day. I’m sorry to say, He hasn’t yet.

There are some places too remote even for billboards, however. Those are my favorite. With nothing in sight save for distant rock formations or the blades of a far-off wind turbine, there’s little standing in the way of a sunset as vibrant as it is pure.

The landscape of the Great Plains, while at first glance mundane, teems with beauty. Every rolling crest and dip of the prairie is part of a soothing rhythm, the drive akin to the gentle swaying of a ship at sea. The only difference? I’m not steering my ship into safe harbor like most captains. I’m out in pursuit of the storm.

Excerpted from Looking Up: The True Adventures of a Storm-Chasing Weather Nerd, by Matthew Cappucci. Published by Pegasus Books. Copyright 2022. Reprinted with permission. All rights reserved.

A self-proclaimed natural disaster, Matthew Capucci has lived a tempestuous life beyond chasing storms. He began presenting at conferences and writing for local newspapers at age fourteen, and attended Harvard University, where he created his own special concentration in atmospheric sciences‚ the first-ever in the institution’s 400-year history. A meteorologist for The Washington Post, Matthew does routine forecasts on NPR, Canada's CTV News Network (during hurricane season), makes international television appearances during tornado and wildfire episodes, and serves as a frequent U.S. tropical weather expert for BBC News. He also is an on-air meteorologist at FOX5 in Washington D.C. A passionate advocate for introducing children and young people to the joy of science, he works part-time as an educational and college admissions consultant, has delivered motivational speeches around the world, and is a regular on SiriusXM’s “Children’s Palace.” 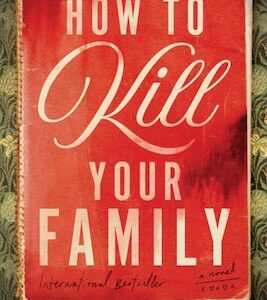 Limehouse prison is, as you might imagine, horrible. Except maybe you can’t imagine it, not really. There are no games...
© LitHub
Back to top