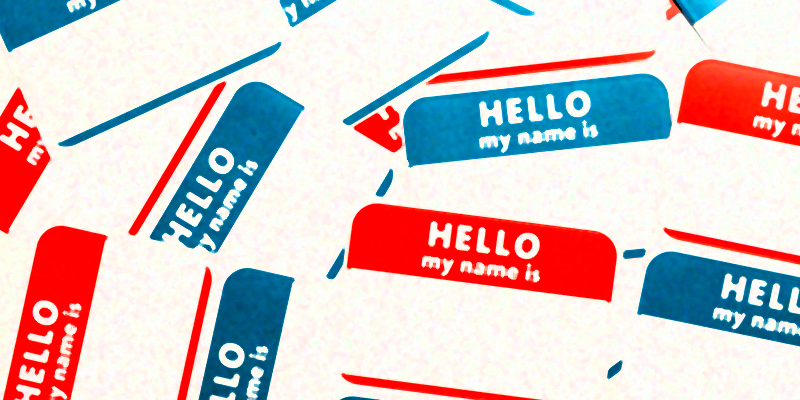 In Dan Chaon’s new dystopian thriller, Sleepwalk, his narrator/protagonist draws on a roster of similar but different names, reacting to the shifting existential requirements of his ever-precarious situation. There’s Will Bear, Billy Bayer, Barry Billingsly, and Liam Bahr among his dozen-odd aliases, and each serves a (usually devious) purpose. As Chaon’s spooky tale unfurls, we learn that many in his supporting cast have aliases, too. Their own survival would seem to depend on their ability to “be” someone else when necessary.

Chaon is an ingenious writer, and his latest novel reminds me of the essential properties of a name––of our own names (sometimes a pseudonym itself) and the names we give our fictional creations. But as Chaon’s people rely on a name or names to mislead and protect, all of us, as fiction writers, more commonly use names to designate, characterize, enlighten, arouse, frighten, or amuse.

In fact, few authorial choices are more important to the tone and verisimilitude of our stories, not to say more fun for the author to conjure, consider, and re-consider. Some authors, myself included, find it difficult if not impossible to develop our nascent stories without first settling on the names of at least the major characters. That’s because their names often do as much to define and animate them as their behavior, language, and physical description.

One of my earliest influences (long before I knew they were influences) was the criminal cast of Chester Gould’s immortal comic strip, Dick Tracy. The names of Gould’s assorted thugs and lowlifes often painted indelible pictures: B.B. Eyes, Flat Top, Breathless Mahoney, and the Brow, to name a few. Then there were Gould’s friendlies, whose names both described and tickled, e.g. Detective Sam Catchem, farmer B.O. Plenty, and his wife Gravel Gertie. The name Dick Tracy itself was an inspired choice for the resolute, razor-faced detective––yes, per noir jargon, a “dick”.

Friends of mine insist that no suspense author gave his characters more evocative or memorable handles than Arthur Conan Doyle, beginning, of course, with Sherlock Holmes. Like Sherlock himself, his brother Mycroft, Dr. Watson, Inspector Lestrade, and Professor Moriarty have become archetypes of the culture, but more because of their crucial roles in ACD’s famous tales than the qualities of their names.

A few of my contemporary favorites enrich and enliven the work of the late, great Elmore Leonard––Chili Palmer and Ray Bones in Get Shorty, for instance; the Blackbird and Richie Nix in Killshot; Raylan Givens in Riding the Rap (and, later, the TV series Justified, which was based on Leonard’s stories).

In Killshot, Armand Degas is a mixed-blood Ojibway from Montreal who performs the occasional hit for the Detroit-based mob. When his Italian employers aren’t calling him Chief, he’s The Blackbird, presumably on account of his sleek black hair and dark line of work. When Degas hooks up with a smalltime crook named Richie Nix, however, the nomenclature changes, reflecting a shift in Armand’s self-perception, our understanding of Armand, and Leonard’s storytelling prowess.

“Richie started calling him the Bird,” Leonard writes. “First, introducing him [to his girlfriend] as Mr. Blackbird, then right away saying, ‘Yeah, I ran into the Bird at Henry’s.’ And a couple of minutes later, ‘Get me and the Bird a drink, will you?’ Making it sound like they were old buddies and he’d always called him by that name. The funny thing was, Armand didn’t mind it.

“The Bird. New name for the beginning of a new time in his life. Different, not so Indian-sounding as he played with it in his mind. Who are you? I’m the Bird. Not a blackbird or a seagull, but his own special kind. He liked the way Richie Nix said it, the guy sounding proud to know him, wanting to show him off.”

Another personal favorite, George V. Higgins, populated his gritty and dangerous 1970s Boston with a gaggle of corrupt cops and murderous hoods––it’s often difficult to distinguish one group from the other. Higgins uses the occasional fanciful nickname (e.g., Digger Doherty in The Digger’s Game), but more often creates memorable personae with the repetition of an ethnic name, notably Eddie Coyle in The Friends of Eddie Coyle (the best crime novel I’ve ever read) and Jackie Cogan of Cogan’s Trade (maybe the second-best). Some of Higgins’ characters are referred to only by their last names, and those ordinary Irish and Italian surnames––Dillon, Foley, and Scalisi in Eddie Coyle––become extraordinarily ominous as the story lurches toward its nasty end.

For me, the naming process can range from the literary equivalent of a root canal to unexpected gifts from God. My previous novel, The Secret Lives of Dentists, is set in Minneapolis, my home town, in the middle 1950s. There are several dozen characters, and most of them bear Scandinavian, German, or Scotch-Irish surnames, reflecting the city’s makeup at the time. There is a murder that sets the story in motion; the victim is an attractive young wife and mother from a small town in North Dakota whose married name is Teresa Hickman, so-called because when I was young I knew an attractive small-town woman named Hickman.

Terry Hickman’s murder is investigated by a homicide detective named Arne Anderson, because the name Anderson is ubiquitous in these parts and because, in my mind, Arne is what a big, tough, middle-aged Swede would likely be named in those days. The primary suspect is a Jewish dentist whom I named Herschel David Rose, which just seemed to fit. His Jewishness is an important part of the story, but I didn’t want his name to be stereotypical.

I named a cocky young detective, Sid Hessburg, after a cocky young know-it-all I grew up with. I even gave Sid the real guy’s glossy pompadour, which gleams under the courtroom lights during his testimony at Dr. Rose’s trial. I dubbed a city patrolman Dewey Ostlund, another good Scandinavian surname, after a long-ago Roosevelt High teammate. I named the United Press bureau chief Miles Mckenzie because in Secret Lives he dresses and speaks very much like my actual wire-service boss fifty years ago. All these names helped me visualize and activate my characters.

Many of the names required both thought and a little research. A few were happy accidents that seemingly sprang unbidden from the ether as I was compiling my notes.

One such name in that novel belongs to a Canadian tent preacher whose only mention was necessary because he had an adulterous relationship with Terry Hickman’s mother. I call the guy Inman Akers––a name I’d never heard of until I invented it, but, in my mind, one that fit my slick itinerant Bible-thumper to a T.

Another name popped up without forethought as I was writing its owner into my story. He’s Fred MacMurray, the Hiawatha County coroner, “a loose-limbed, good-looking, middle-aged man who, like the popular actor, seems almost preternaturally fit and happy, often humming a show tune as he supervises the plumbing of a decedent’s stomach or sawing off the top of his skull.” Anyone who went to the movies during the 1950s will recognize the man I’m talking about.

One of my most important characters has no name at all until nearly the end of the novel. For most of the book he is simply “the driver.” His willful anonymity is both sinister and self-protective––until, well, it isn’t.

I read the obituary pages in my daily paper, because I’m old enough to know many of the deceased and because the obits are a rich source of local names, both common and exotic. So are old high school yearbooks and city directories. I keep my ears open for the odd and/or evocative names that people drop in conversation. Found objects can be the writer’s best friends.

My new suspense novel, entitled My Name Is Joe LaVoie, is a family saga, so the main characters carry the eponymous family name, which originated in French Canada. Most of the book’s other names are the familiar Anglo-Saxon handles I was familiar with growing up in a white, middle-class south Minneapolis neighborhood. The surnames of several men that Joe LaVoie’s promiscuous older sister, Ronnie, marries over the course of her life are typical of the names you heard everyday in mid-century America, among them Adams, Harrison, and Grant. But it’s Ronnie’s bibulous father who points out an interesting connection, which I swear to God I hadn’t thought of until I typed it on my page:

Ticking Ronnie’s husbands off on his fingers one day, John LaVoie hollers, “Jesus Christ, she’s marrying the goddamn Presidents, one after the other!”

So names take on unexpected meanings.

Toward the end of Sleepwalk, Dan Chaon’s narrator, when asked, says, “I’m Billy!”

“Billy!” his interlocutor replies, looking at a list he’s pulled out of his pocket. “Says here your name is Barry. Barry Billingsly, fifty-year-old white male.”

The internet has plenty of advice for choosing our fictitious names. Select names appropriate to the characters’ ages, origins, occupations, and social status. Avoid names that readers will have trouble pronouncing and remembering. Go easy on the alliteration. Some due diligence may help avoid a libel suit. All sound advice.

I would add choose a name that resonates, that makes you laugh or wonder. You’ll know when a name’s going to work. 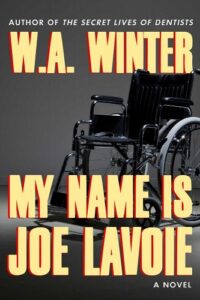 W.A. Winter is the pen name of William Swanson, a Minneapolis journalist. Swanson is the author of three true-crime books--Dial M: The Murder of Carol Thompson, Black White Blue: The Assassination of Patrolman Sackett, and Stolen from the Garden: The Kidnapping of Virginia Piper--published by Borealis Books, an imprint of the Minnesota Historical Society Press. Writing as W.A. Winter, he has published, besides The Secret Lives of Dentists, three suspense novels available online from Kindle Books and Smashwords.com: Handyman, See You / See Me, and Wolfie's Game. 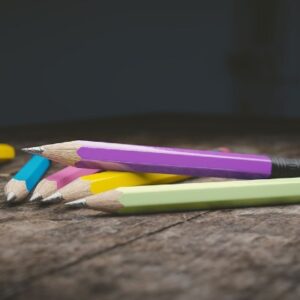 Is there that big a difference between falling in love and solving a murder?  Um, yes, there is, especially when writing...
© LitHub
Back to top