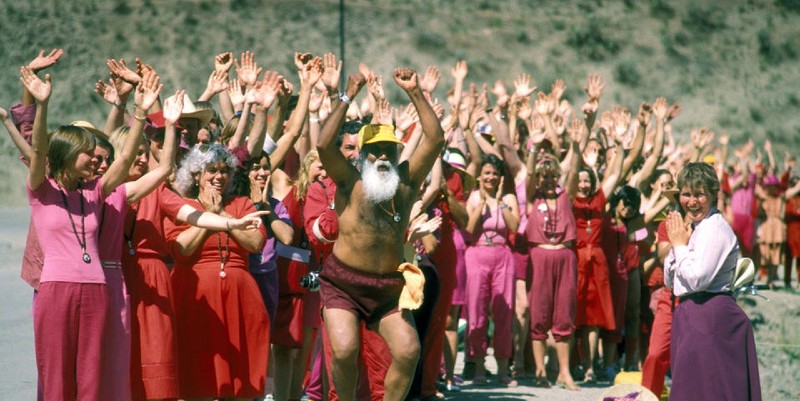 The world is in shambles these days, which has got author August Norman thinking about starting a cult of his own.

As the American democracy fails the test of a global pandemic, the economy crawls under a rock to die, and the clear facts of scientific reasoning are disputed by entitled, slack-jawed nuh-uh-derthals, my wife and I have brought a child into the world with the usual optimistic, open-mouthed drool of a new generation’s hope (my drool, not hers or the child’s).

Our concerted efforts combined the latest of apps with the oldest, and arguably most enjoyable, of biological functions, achieving success with a sophisticated dance of chemistry, technology, timing, and faith. Either that process, or an evening of sitcoms, a bottle of wine from Solvang, and a whole bunch of luck, changed me from crime fiction author, August Norman, into bedraggled, searching-for-long-term-life-insurance, father-figure, August Norman. Since the nine-month waiting period coincided with the writing of my second Caitlin Bergman thriller (Sins of the Mother, Crooked Lane Books – sorry about the plug, but I’ve got a baby to feed!), I spent a lot of time thinking about the definition of family. When I added in the modern world’s tribal politics that group people together via shared beliefs rather than quantitative evidence, I knew it was time to start my own cult.

Like a hand held over a candle’s flame just until the point of pain, my fascination with people who blindly follow the dogma of self-professed prophets—often giving up friends, families, sexual boundaries, economic treasures, and original perceptions of reality—is thinly protected with a sense of ‘There, but for the grace of God, go I.’ Like many other creative hopefuls, I moved to Hollywood in my early 20s only to be lost in a metropolitan area of more than ten million people from every country on the planet amidst an extreme range of wealth and poverty. Like anyone, I wanted to feel unique and be recognized. Had I not found friends and a second home in a comedy theater, (insert argument about how comedy communities have their own levels of idol worship tied to monetary expense and unrealistic expectations of success here), I might easily have found my way to a party in the hills where far-too attractive women could have appeared interested in my “unique personality” or “special vibe” or “ability-to-pay-for-a-car.”

Would I have joined them for a yoga retreat, spiritual weekend in the woods, or charity-based bikini carwash, maybe thrown in a little cash for the time? Probably. Would I have been just as interested in a reputable playhouse that had weekly auditions for what appeared to be legitimate theater but turned out to funnel creative souls directly into a well-known and highly litigious empowerment society? Smarter people than I have done so, and I’ve used the words litigious, bedraggled, and quantitative somewhat correctly so far. Armed with this knowledge of myself, it’s easy to see how perfectly normal, well-balanced, educated people, hoping for self-fulfillment and the promise of a better tomorrow, can place themselves directly in the path of a cult leader. While that makes for regrettable, and often dangerous life decisions, it lends itself perfectly to crime fiction, especially given the current climate of rampant cognitive dissonance.

Naturally, I took my frustration over the widespread denial of climate change, the ridiculousness of our current political system, and the ever-present stupidity of racism, and funneled them all into my work, rather than my newborn son. This process led to both a novel I’m excited to share and a bullet-pointed, how-to list that you can follow to start your own cash-cow, I mean religion.

MY FIVE-STEP GUIDE TO CRAFTING A CULT

Picture the coolest kid in your high school. Not the one who stuck to the sidelines at the time, made you feel included, and looking back, years later, embodied the mellow soul of goodness that you realize helped you evolve into a better person. I’m talking about the absurdly good-looking mean girl who made you say bad things about your best friend while they were listening in on a phone call, or the guy that simultaneously dated three girls without a single shred of shame. Were they also the local coke dealer or guy who could get acid? Probably.

Now picture them 15 years later—except the justice of the world hasn’t humbled them one bit. They still are far too attractive. They still wield the skills of a street pimp to compromise good souls who search for affection. They still seem to have the trappings of wealth, yet never seem to work for it. Plus, they’re in even better shape now than ever. Have your guy, girl, or non-definable manipulator in mind? My cult leader, Desmond Pratten, starts his life as a West Hollywood yogi who welcomes all, heals the inflicted with his touch, and somehow knows what you’re thinking without hearing you speak. Despite offering his overly full classes for pay-what-you-can rates, he lives in a mansion in the hills as a sort-of personal guide for a guilt-ridden defense contractor’s widow.

Could your cult members whip themselves until they bleed, cut their own skin, and then eat those same pieces of skin? Sure. But how many people will come back for seconds, let alone reach for the tab? Your cult leader will catch more flies with honey. See a wallflower who barely speaks? Give them a surprise party where every guest claims they’ve heard this wallflower speak in their dreams. Have an IT guy who can create an entire online world but can’t spend the night with a woman? Send in the threesome team every night for a week. Get indoor people outdoors and outdoor people in, give the woman with the unfortunate overbite those clear braces, help the homeless teen get his little brother off the street. Teach them to play guitar, start a drum circle. . .Plus the bikini carwash thing. Word of mouth will spread like herpes. Also, herpes will spread like herpes—so hand out Valtrex like it’s candy.

3.  GIVE THEM AN ENFORCER

Yes, your leader will shine the light of their love on their devotees from time to time, and yes, that ray of sunshine will keep them glowing for weeks (basic economic scarcity), but they’re going to need someone to keep others in line on the day to day, someone who has no problem breaking society’s rules or the other members’ spirits. Give them a disgraced ex-cop looking to make up for past sins, a lover who doesn’t mind sharing but always wants to be his number one girl, a doctor who no longer has a license due to patients lost during their substance abuse phase. Your leader will turn guilty secrets into virtues. These shameful flaws become gifts granted from above, gifts that should be embraced. Your enforcer will be proud to guard your leader, cherishing the role of gatekeeper, even to the point of signing legal documents that might shift the blame. After a while, they’ll act on their own initiative, especially when your leader would otherwise compromise themselves. My enforcer is a lawyer named Gwendolyn Sunshine who knows where the bodies are buried, literally.

4.  LET THEM IN ON A SECRET THAT THEY’LL FIGHT FOR

The health benefits of a hormone-free diet, constant exercise, and living life without regret through daily self-examination are worthy of self-sacrifice, but anyone with an annual gym membership knows that even the most disciplined of us eventually gives in to birthday cake. That’s why your leader has to entrust their members with a secret mission, and the execution of this task must enable the follower to abandon friends, family, and finances. If the government is run by lizard people who hurt children and the only way to save your country is to destroy a pizza place, you have no problem storming the place with an assault rifle. (Sure, that reference has more to do with a current conspiracy theory than a religion, but the line can and should be vague—unlike the edge of the flat earth, which very clearly happens just west of. . .wait, where do those people claim the world ends?) My group, the Daughters of God, know that their hard work and devotion to their deity, through Desmond his conduit, naturally, are preventing a nuclear cataclysm. That makes the hard choice of leaving a family behind to live in a mountain compound that much easier. Also, every penny they can spare counts, even if they have to lie, cheat, and steal to fund their cause.

Though group mind, or mob mentality for those not indoctrinated by a comedy theater, is a powerful force, the individual conscience works its way back to the rational when left alone, time after time. Therefore, a secret might not be powerful enough to keep followers inside the compound walls. That’s when your leader really needs to shine. A miracle is their ace in the hole. Traditional religions have to compete with technology in today’s world, hence the relative dearth of twentieth century saints, so your leader will have to be a bit of a showman in order to keep the kids in line. Luckily, seated at their right hand is an enforcer who wants nothing more than to stay at the top of the love pile. Would a devoted servant help fake a faith healing, burning bush, or even a resurrection? Let’s just say when my group’s wealthy defense contractor’s widow finally succumbs to old age, my leader takes an unexpected corpse and makes liturgical lemonade that his sleep-deprived followers can’t help but pass around. (Spoiler alert: They don’t actually drink lemonade made from her body. That’s my attempt at a humorous mixed metaphor. There is poison, though.)

With these five steps, a little start-up money, and a location that funnels soul-searchers your literary direction, you can easily create a believable cult in today’s society that your leader can ride to financial security until the seemingly impossible death of their physical body. For more information, or just to contribute to my own personal cult (cough, cough, don’t forget they let me have a child now), check out the rise and fall of Desmond Pratten’s Daughters of God in Sins of the Mother. If you’re starting up your own group, good luck. Just avoid telling your followers something that’s easy to disprove, like the exact date the world will end, or where the edge of the flat earth is. Eventually, they’ll wait out the clock or stock up a catamaran with Vitamin C and make the trip to just west of. . .Hawaii, maybe? No wait, there’s Japan, and China, India, Africa and Europe, then we’re back to Florida. . .or is that just what they want us to believe? 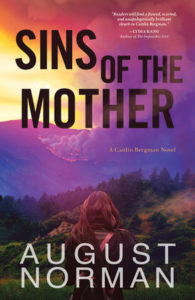 Originally from central Indiana, thriller and mystery author August Norman has called Los Angeles home for two decades, writing for and/or appearing in movies, television, stage productions, web series, and even, commercial advertising. A lover and champion of crime fiction, Norman is an active member of the Mystery Writers of America, the International Thriller Writers, the Sisters in Crime (National and LA), and regularly attends the Santa Barbara Writer's Conference. In addition, August is a founding member and regular performer with LA's longest running improv comedy show, “Opening Night: The Improvised Musical!” For more information, visit augustnorman.com.
http://augustnorman.com 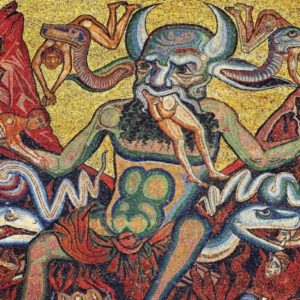 The word “exorcism” is derived from the Greek word exorkizein, meaning “to bind by oath.” But in practice, exorcism...
© LitHub
Back to top