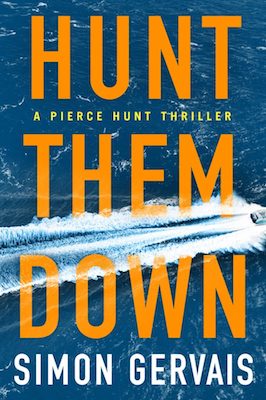 The following is an exclusive excerpt from Hunt Them Down, by Simon Gervais. In the following passage, a policeman fired after a suspected shooting of an unarmed man goes after the journalist who broke the story that led to his dismissal.

Moore couldn’t believe his luck. He checked his live viewers. Ten thou­sand and climbing. Amazing. The likes were coming in faster than ever before. And so were the comments.

He had filmed everything, including when the lead special agent—what was his name again? Oh yeah, Hunt—had shot the man who had just surrendered. Moore’s whole body was shaking—not from fear but from excitement. He quietly climbed out of the Durango and contin­ued to film. The scene was surreal. The panel van had so many bul­let holes that it looked like an infantry platoon had used it for target practice. Part of him wished innocent people had been inside the van when the DEA agents fired at it. That would’ve been the biggest law enforcement blunder in the history of Chicago. Worth a Pulitzer, maybe?

Moore aimed his phone at the lead agent, who was kneeling next to what appeared to be a dead DEA agent. Oh my God. I can’t believe this. The viewers will go crazy. This will be international news within the hour.

He jogged toward them. “What’s the name of the dead agent?” he asked.

Hunt turned his head and saw that damn reporter aiming his phone at his fallen comrade. Moore was grinning as if he had just won the lottery. The man is a plague, Hunt thought with revulsion. His pomp­ous, entitled attitude exemplified everything that was wrong in today’s society. At that moment in time, there was nothing Hunt wanted more than to punch the reporter in the face, to inflict physical pain on that poor excuse of a man as payback for his lack of respect. The desire to wipe the smirk off the reporter’s face was almost overwhelming, but something deep inside Hunt held him back. The promise.

A promise he had made to himself years ago while he was still an Army Ranger. A promise on which the seals were still unbroken. A promise entailing that he would never, ever, come what may, use gratu­itous violence again. Pea-brained Luke Moore, as ignorant and idiotic as he was, wasn’t worth breaking the promise over.

“Pierce, you better make your way in here. There’s something you need to see.”

But Moore wasn’t done with him yet. The reporter’s phone now pointed at Hunt.

He had filmed everything, including when the lead special agent—what was his name again? Oh yeah, Hunt—had shot the man who had just surrendered.

Hunt ignored him and started walking in the direction of the ware­house. Moore grabbed his elbow.

Hunt spun around and placed the palm of his left hand on Moore’s chest.

“Get out of my face,” Hunt warned. The ice in his voice was enough to make Moore step away, but neither man intended what happened next.

Moore tripped over his own feet and fell backward, managing to hit his head on the pavement in the process. After a stunned moment, he grimaced in pain and raised his hand to the back of his head. It came back bloody. To Hunt’s surprise, he smiled.

“Are you for real? I barely touched you, dickhead,” Hunt said, regretting the words the moment they came out.

“You shoved me to the ground! That’s assault, and I’m pressing charges.”

Hunt was still steaming over that idiot reporter, but he didn’t have time to waste. He left Moore sitting on the pavement, still filming with his cell phone, and entered the warehouse. He might have been better off if he’d stayed outside.

Hunt wished anyone who said drug use was a victimless crime could see what was in front of him. The twelve young girls who had been slaughtered were all the proof the skeptics needed to see. The girls had never stood a chance.

Why had the cartel killed them? What had prompted them to depart the warehouse? Had they known the DEA was about to raid them? It certainly looked like it. But how?

“Pierce, this is Tom Hauer.”

Hauer was the acting administrator of the DEA. He was a political appointee but a good guy nonetheless.

“Can I call you back, sir? We’re still in the middle of the operation.”

“No, you’re not, I’m afraid. You’re relieved of your command, and you’re about to be placed under arrest by the Chicago Police Department.”

“Say that again?” Hunt replied, his temper rising. This wasn’t a good time to mess with him.

“You’re relieved. I’m sorry, Pierce. It’s all over the news. My hands are tied.”

“What the hell are you talking about?”

“That reporter you pushed to the ground was filming. Live.”

“For Christ’s sake. I didn’t push him to the ground. He tripped over his own feet.”

“Doesn’t matter.” Hauer sighed. “He was tweeting during the whole goddamn operation, and when the shooting started, he switched to a live video feed. He’s saying you shot an unarmed man. Tell me it isn’t true.”

“Moore’s full of shit, sir. The man was armed,” Hunt replied, his mind racing. Something Hauer had said had caught his attention. “Did you say Moore was tweeting? About the raid?”

“I’m on his Twitter feed now, and yes, he started tweeting the moment you left the office. How the hell did this happen?”

Shit! They knew we were coming because of Moore.

Hunt hung up on his boss.

“Follow me,” he said to three of his team members. “I’m gonna strangle that journalist shitbag.”

“Might not be a good idea, Pierce,” Simon Carter told him. Carter was his second-in-command and a close friend.

Hunt stopped and looked Carter square in the eyes. “He screwed us. He publicly tweeted our location, Simon. Scott’s death, and all of this, is on him.”

Hunt saw his own fury reflected in Carter’s eyes. Losing a team­mate was bad enough, but they all knew the risks associated with the job. Being betrayed was a different story. Someone was about to pay dearly for his sins.

The moment Hunt stepped out of the warehouse, he was inter­cepted by a Chicago police lieutenant flanked by three other officers. They had their hands on the butts of their pistols. Hunt was glad the guns were still holstered.

“Not now, Lieutenant,” Hunt said. “There’s something we need to do. Give me five minutes.”

For a moment, the officer looked confused. Then his eyes moved to the three DEA special agents in full combat gear standing behind the man he was supposed to take into custody. It didn’t look as if they were going to allow their leader to be taken. At least not yet.

“All right,” the lieutenant finally said, stepping aside.

Hunt nodded his thanks.

Outside, the sun was shining. Police vehicles and ambulances were everywhere. Someone had had the decency to cover Scott Miller’s body with a sheet. There would be a time to mourn him, but now wasn’t that time. Now was the time for revenge.

Someone had had the decency to cover Scott Miller’s body with a sheet. There would be a time to mourn him, but now wasn’t that time. Now was the time for revenge.

Hunt’s gaze was fixed on Luke Moore, who was being treated by a paramedic in the back of an ambulance. A DEA special agent was stand­ing next to him. The paramedic saw Hunt and took two steps back.

“Come with me,” Hunt said, yanking Moore to his feet.

“I’m not going anywhere with you,” Moore said and then started screaming. “Help me! This is police brutality!”

Hunt effortlessly lifted the reporter and slung him over his left shoulder.

“There’s something I want to show you,” Hunt said. “Your handiwork.”

Moore didn’t care that people were staring at him. It actually fit per­fectly with his plan. In his mind, they were witnesses he would call upon to testify how unfairly the police had treated him. He was already counting the millions he’d get from a civil law­suit when his head bumped hard against a doorframe. Moore let out a whooshing sound and blinked back tears of pain.

He twisted his head to the other side and saw a bunch of Chicago police officers chatting together. “Hey, you saw that?” Moore screamed at them. “This guy is out of control. Do something!”

One of the officers pointed a finger toward him. “That’s Luke Moore,” he said.

“He’s the cop hater I talked to you about.”

One by one, the officers turned their backs.

Hunt lifted Moore off his shoulder and placed him on his feet, handling the journalist as though he was a wooden toy soldier. Moore had the good sense to remain quiet. Carter was standing guard next to the door leading into the laboratory.

“He needs to see what he’s done,” Hunt hissed.

Carter handed a gas mask to Hunt but didn’t offer one to Moore.

“Him too,” Hunt said reluctantly, and they waited for Moore to put a mask on.

Carter opened the door, and Hunt pushed Moore inside. The reporter stopped and tried to walk back out, but Hunt shoved him forward.

“What is this? Why are you bringing me here?” Moore demanded.

Hunt gripped Moore’s neck and showed him the twelve naked bod­ies resting on the floor. “You did this,” Hunt said.

Moore twisted, trying to turn his head away. “I had nothing to do with this. Who are they?”

“They were human slaves.” “Get me out of here! I had nothing to do with this!” Moore repeated, trying to get away. Hunt tightened his grip around the reporter’s neck and kicked him behind the legs, forcing him onto his knees. In one swift motion, Hunt drew his firearm and placed the muzzle against the back of Moore’s head.

Moore felt the pressure of the gun to his head. Oh my God. I’m gonna die. He had seen Hunt kill an unarmed man minutes ago. Hunt wouldn’t hesitate to kill him here surrounded by his brutal and heartless peers. Moore wanted to cry for help, but he was too terrified. Beads of sweat had formed on his forehead, which made wearing the mask even less comfortable.

“Why are you doing this?” he asked.

Had he caused these deaths? Was he somehow responsible for this mayhem? Without warning, a terrible odor made its way to his olfactory sensory neurons. The stench was such that he gagged on it.

“What the hell?” he heard Hunt say.

It was then that Moore, on his knees and with a gun to his head, understood. The hot, wet weight that filled his underpants didn’t lie. He had shit himself. Never in his life had he felt so humiliated and degraded. And for that, he’d make the DEA pay dearly.

From HUNT THEM DOWN. Used with the permission of the publisher, Thomas and Mercer. Copyright © 2019 by Simon Gervais.

Our Favorite Excerpts of 2018 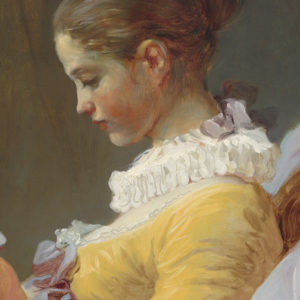 Our Favorite Excerpts of 2018 CrimeReads, as you may or may not have noticed (it's just nice to know that you're reading the site!), runs a whole lot of excerpts....
© LitHub
Back to top