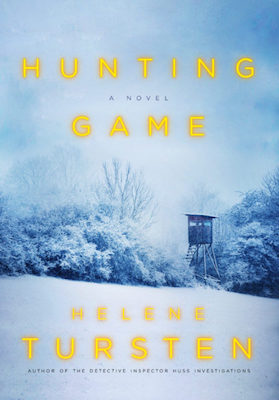 The following is an exclusive excerpt from Hunting Game, the first installment in Helene Tursten’s new series featuring Embla Nyström, the anxious and athletic 28-year-old Detective Inspector. Here, she visits her uncle’s cabin in rural Sweden for the annual moose hunt, only to be introduced to an unwelcome outsider.

Peter asked a few more questions about Embla and became noticeably interested when she told him about her work in the mobile unit.

“Västra Götaland County Bureau of Investigation’s mobile unit is a bit unwieldy. Usually we’re just called the Unit. Among ourselves we say VGM,” she explained.

“So you and two old guys drive around the countryside all over the region and provide support when the local police don’t have sufficient resources. Like super cops.”

When he put it like that it sounded pretty corny, but that was basically the way it was. She simply nodded and took a sip from her wine glass. Normally she was very careful with alcohol, but at the annual hunting dinner she usually had both an aquavit and a few glasses of wine.

“What made you decide to start hunting?” she asked to change the subject.

“Now I have land with hunting rights, so why not?”

“Have you ever shot any game?”

“Sure. Deer and hares. But not all that many. I’ve mostly just practiced at the shooting range.”

“Absolutely. There’s an excitement in the hunt that I like. One moment you’re enjoying the calm and the next second it’s a full adrenaline rush!”

They raised their glasses and toasted to the hunt. Then Sixten Svensson turned his head and fixed his bloodshot eyes on Peter’s.

“Fun! Excitement . . . excitement! Hunting is not fun and exciting. It puts food on the table and, damn it, it’s been that way since the Stone Age. Now all of a sudden city people come out and want to shoot because it’s fun! They’re dangerous! Can’t shoot. Wound the animals and . . . cause trouble,” he hissed.

Sixten narrowed his eyes and leered at Peter as he drew his thin lips into a mean smile. “Speaking of hunting. I don’t give a damn that you’re just as lousy a hunter as your father. Stick to hunting ladies!”

The others around the table started squirming. It was obvious that Sixten was picking a quarrel.

Without looking at Sixten, Peter got up from the table and thanked everyone for a pleasant evening. With an extra thanks to the hosts he disappeared through the door.

“You are a fucking idiot, Sixten! Can’t you handle a few drinks without getting unpleasant? And you were actually friends with Peter’s dad,” Nisse said angrily.

Once Peter had left the others also started to get up. The party atmosphere was ruined. Tobias’s wife hadn’t had anything to drink during the evening and drove her husband, her father-in-law, and the tipsy Sixten home.

Embla told Nisse that he should bike home ahead of her. She intended to stay awhile to help Karin.

The two cousins drank a little more wine and talked while they cleared away the dirty dishes.

“Peter’s sister, what do you know about her?” Embla asked after a while.

“Well, not much. Peter is a few years older than me, and a boy besides, so we never really played together. And then he moved with his mother to Gothenburg. But I remember his sister. Very pretty. Oooooh, how I admired her hair! Super long and blonde. She was going to high school in Åmål when she disappeared.”

“Well, not much. Peter is a few years older than me, and a boy besides, so we never really played together. And then he moved with his mother to Gothenburg. But I remember his sister. Very pretty. Oooooh, how I admired her hair! Super long and blonde. She was going to high school in Åmål when she disappeared.”

There was that familiar stab in the gut. “When she disappeared . . .”

“How old was Peter when he and his mother moved?” Embla asked, pushing the unpleasant thoughts aside.

Karin frowned and tried to think. “He was in elementary school . . . but what class . . . I don’t really remember.”

“And his sister had already taken off by then?”

“Yes. She ran away the year before. In the fall or winter. Evidently she had talked about going to Gothenburg and getting a job.”

“Nisse mentioned that the dad was an alcoholic and abused the others in the family.”

“Yes, I’ve heard that, too. I think that’s why the sister left and then Peter and his mother. They moved in with her parents in Gothenburg. I guess his sister was already there. Although I recall that they looked for her in the forest because she disappeared without a trace after a party.”

They rinsed off the dirty dishes, set them in the dish-washer, and started hand washing the big serving plates and casseroles.

“What is his sister’s name?”

Karin stood with her hands in the sink. The detergent bubbles made their way up toward her elbows, and she managed to smear a few onto her bangs as she brushed her hair off her forehead.

“Why haven’t I heard about this family before? I’ve been coming here since I was little and . . .”

“You hadn’t even been born yet when the sister disappeared. You and your brothers came here a few years later. By then all that had already been forgotten and replaced with more recent scandals and gossip. It happened at least thirty years ago!”

Embla was the last guest to leave Karin and Björn’s farm. It was almost one o’clock, but the night was clear with a radiant full moon and an amazing starry sky. It was cold, just below freezing. Fortunately she had remembered to bring both a stocking cap and mittens with her. She started pedaling slowly toward Nisse’s farm. Nature was bathing in the magical light from the moon and stars and she enjoyed the silence. A faint breeze blew through the few remaining leaves on the trees, making them rustle. The night air was full of saturated odors of earth, mushrooms, and rotting plants. Autumn smells. The hoo, hoo, hoo-hoo-hoo-hoo of a tawny owl cut through the silence. It was an eerie cry. Nisse had taught her to imitate the call by cupping her hands and blowing through slightly separated thumbs.

Out on the fields big bales of silage wrapped in white plastic shimmered. She could see black shadows in the field by the side of the road. Some of them were lying down on the ground and looked like big stones. Nisse’s Highland cattle. They looked sweet with their long, golden-brown coats, but their horns invited caution and respect.

On the opposite side of the road the birch forest had not thinned out and the brush was dense. The glow of the bike lamp was faint, and Embla biked out into the moonlight to better see potholes and bumps in the road.

Suddenly a flash of light danced in the corner of her eye, and some movement caught her attention. Some-thing white was fluttering among the tree trunks. She braked hard and turned her head but only managed to catch a glimpse of a white garment and long, light hair. The moonlight made the hair and dress glisten. It looked as if the apparition was hovering slightly above the ground before it disappeared in the trees.

When the initial surprise passed, Embla set the bicycle down by the side of the road and quickly jumped across the ditch. She started working her way through the brush toward the place where the white figure had disappeared. Even though she was used to moving in rough terrain, it was difficult. Dense thickets let her through only reluctantly, and slippery stones and roots tried to make her fall. With the trees blocking the moonlight, it was almost impossible to see anything ahead of her. She cursed herself for having left her flashlight in the car, instead of keeping it in her jacket pocket as usual.

When she came up to the spot where she had last seen the mysterious apparition, she found herself on a low knoll. It was the slight elevation that had given her the sense that the figure was hovering. The figure had disappeared into a cluster of straight birch trees on top of the hill.

She held her breath and listened. It was quiet, apart from the dry rustling of the leaves. The tawny owl let out another screech in the distance.

It was pointless to try to look for tracks; it would be better to return in daylight.

When she walked back toward the road she perceived faint sounds behind her. Someone was moving carefully between the birches on the hillock. She felt like she was being watched. She jumped on the bicycle and quickly pedaled away.

From HUNTING GAME. Used with the permission of the publisher, Soho. Copyright © 2019 by Helene Tursten. 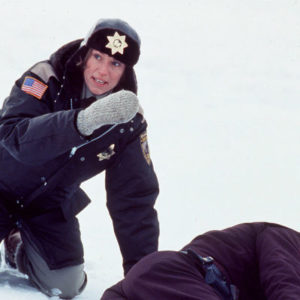