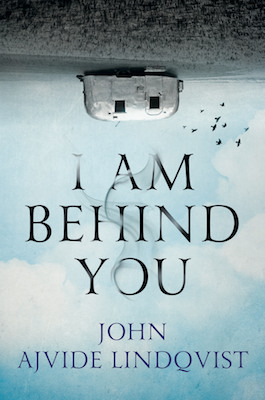 The following is an exclusive excerpt from I Am Behind You, by John Ajvide Lindqvist, internationally bestselling author of Let The Right One In. In the following passage, residents of a trailer park wake up to find that either their caravans have been moved, or the park has vanished around them, for one of the eeriest opening passages we’ve read this year.

‘Well, go to the toilet then.’

‘Of course it is. It’s where you went yesterday. The service block.’

‘For goodness sake, can’t you let me sleep just for once?’

‘So go to the service block. It’s only fifty metres away. Surely you can manage that?’

‘It is. Go outside, turn left and go around this revolting caravan, then carry straight on. That’s where it is.’

‘Oh, pee on the grass for heaven’s sake, and let me sleep. Wake your dad if you insist on playing up.’

‘Nearly everything has gone.’

‘What are you talking about?’

‘Out of the window. Nearly everything has gone.’

Isabelle Sundberg props herself up on her elbow. Her six-year-old daughter Molly is kneeling by the window. Isabelle pushes her out of the way and pulls back the curtain. She is just about to point in the direction of the service block, but her hand drops.

Her first thought is: scenery. Like the backdrop behind Mickey Mouse’s caravan on TV on Christmas Eve. Something artificial, unreal. But the details are too sharp, the three dimensions clearly distinguishable. This is no backdrop.

Isabelle rubs her eyes. Tries to erase the incomprehensible sight. But it is still there, just like her daughter’s monotonous whine.

Her daughter’s voice grates on her eardrums. Isabelle rubs her eyes. Tries to erase the incomprehensible sight. But it is still there, just like her daughter’s monotonous whine. She turns over and drives her knee into her husband’s back. Pulls back the other curtain.

She blinks, shakes her head. It makes no difference. She clenches her jaw, slaps her own face. Her daughter falls silent. Isabelle’s cheek is burning, and nothing has changed. Everything has changed. She grabs hold of her husband’s shoulder and shakes it hard.

Thirty seconds later, Stefan Larsson is woken by a door slamming somewhere. His pyjamas are sticking to his body; it is hot in the caravan, very hot. He has had enough. Everybody else has air con. Later on today, when they go shopping, he is going to buy a couple of decent electric fans to sit on the table, at the very least.

Stefan’s son Emil is humming quietly up in the alcove, caught up in some fantasy as usual. Stefan frowns. Something is wrong. He reaches for his glasses with their thick black frames, puts them on and looks around.

The faithful old caravan looks the same. When he and Carina bought it fifteen years ago, it had been around for at least that long already, but after countless holidays and birdwatching expeditions, it feels like a friend, and you don’t sell a friend online for a few thousand kronor. The worn surfaces have a dull sheen in the light penetrating the thin curtains. Nothing unusual about that.

Carina is asleep, facing away from him. She has kicked off the sheet and the generous curve of her hip is like something from an old painting. Stefan leans over her and picks up the salty aroma of her body; he can see tiny beads of sweat at her hairline. Decent fans, that’s what they need. His gaze fastens on the tattoo on her shoulder. Two eternity symbols. The yearning for a lasting love. She had them done when they were both young. He worships her. It is a strange word to use, but it is the only one that fits.

His eyes widen. Now he knows what it is. The silence. Apart from Carina’s breathing and Emil’s humming, there is total silence. He glances at the clock: quarter to seven. A campsite is never silent. There is always the hum of machinery on stand-by, air conditioning units. But not now. The site has stopped breathing.

Stefan gets out of bed and glances up at the alcove. ‘Morning, kiddo.’

Emil is totally focused on his soft toys, moving them around as he whispers: ‘But what about me? Can’t I…? No, Bengtson, you’re in charge of the guns.’

Stefan goes over to the sink and is filling the coffeepot with water when movements and voices on the grass outside catch his attention. The footballer and his wife are also up and about. So is their daughter. The child is pressed against her mother’s bare legs as the woman gestures angrily at her husband.

Stefan tilts his head on one side. In a parallel universe he would be obliged to lust after that woman. She is in nothing more than her bra and panties, and she looks as if she has stepped straight out of an ad campaign. She is the woman men are supposed to desire. But Stefan has chosen something different, and he is not to be moved. It is a question of dignity, among other things.

Stefan gasps and clutches the edge of the sink as he leans closer to the window. He doesn’t understand what he is seeing.

The coffeepot is full. Stefan turns off the tap, pours the water into the machine, spoons coffee into the filter, then switches it on. Nothing happens. He flicks the switch up and down a couple of times, checks that it is plugged in properly, then thinks:

Which also explains the absence of an electrical hum. He tips the water into a pan and places it on the hotplate. Hello? He scratches his head. If there’s a power cut, the electric stove won’t work either, obviously.

As he leans across to switch on the gas instead, he glances out of the window, past the quarreling couple, to see what the weather is like. The sky is clear and blue, so it should be a lovely…

Stefan gasps and clutches the edge of the sink as he leans closer to the window. He doesn’t understand what he is seeing. The stainless steel is warm to the touch; he feels dizzy and his stomach is churning. If he lets go of the sink he will plummet into emptiness.

Peter has found a sweet wrapper in the right-hand pocket of his shorts. There is a faint rustling noise as he scrunches the wrapper inside his clenched fist. Isabelle is yelling at him, and he stares at the exact spot on her cheek where the palm of his hand might land if it were not fully occupied with the sweet wrapper.

‘How could you be so fucking stupid? Leaving the keys in the car when you were so fucking drunk that some idiot was able to drive off and dump us in this…this…’

He mustn’t hit her. If he does, the balance of power will shift, temporary peace agreements will be torn up and everything will be sucked down into chaos. He did hit her once. The satisfaction was enormous, the aftermath unbearable. Both aspects scared him: the pleasure he took from inflicting physical damage on her, and her ability to inflict mental damage on him.

You think someone’s come along and taken away the other caravans, the kiosk, the service block, the whole fucking lot? Does that sound reasonable? We’ve been moved, you idiot.’

He thinks: Ten thousand. No. Twenty thousand. That’s what he would be willing to pay for five minutes’ silence. The chance to think, to come up with an explanation. But Isabelle’s words hammer down on him and the taut strings of his self-control vibrate. He is capable of only one thing: smoothing out and screwing up the sweet wrapper. Molly is clutching her mother’s legs, playing the role of the frightened child. She does it well, exaggerating only slightly, but Peter sees through her. She is not afraid at all. In some way that Peter cannot understand, she is enjoying this.

He hears a discreet cough. The man with the thick glasses from the caravan next door, tedium personified, is coming towards them. Right now he is a welcome sight. Isabelle’s torrent of words dries up, and Molly stares at the new arrival.

‘Excuse me,’ the man says. ‘Do you have any idea what’s happened?’

‘I don’t know any more than you. Everything has disappeared.’

Isabelle jerks her head and snaps: ‘You as well? You think someone’s come along and taken away the other caravans, the kiosk, the service block, the whole fucking lot? Does that sound reasonable? We’ve been moved, you idiot.’

The man with the glasses looks at the caravans, all that remains of Saludden campsite, and says: ‘In that case it looks as if they’ve moved several of us.’

Molly tugs at Isabelle’s panties. ‘Who are they, Mummy? Who did this?’

The caravans are different ages, different sizes, different models, but they are all white. The cars have less in common, but two of them are Volvos. They all have a tow bar, of course. Two have roof racks.

Besides that: nothing apart from people. Three adults and a child, wandering among the caravans and the cars, the other occupants still sleeping, perhaps dreaming, unaware.

Beyond the little circle lies only grass. A vast expanse of grass, each blade just over three centimetres long, stretching as far as the eye can see in all directions.

It is an empty space.

It is impossible to know what lies beyond the horizon, under the ground, above the sky, but at the moment it is an empty space.

Nothing. Apart from the people. And each person is a world within himself.

From I AM BEHIND YOU. Used with the permission of the publisher, ST. MARTIN’S PRESS. Copyright © 2017 by John Ajvide Lindqvist, translation copyright © 2018 by Marlaine Delargy. 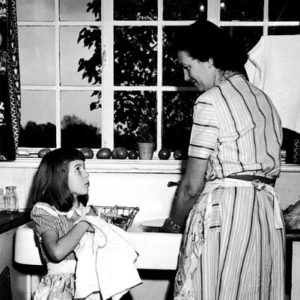 True Crime Advice: Is It Morally Defensible to Own a Charles Manson Dishtowel? Now that true crime obsession has gone mainstream, a whole host of dilemmas and debates have wormed their way into everyday...
© LitHub
Back to top