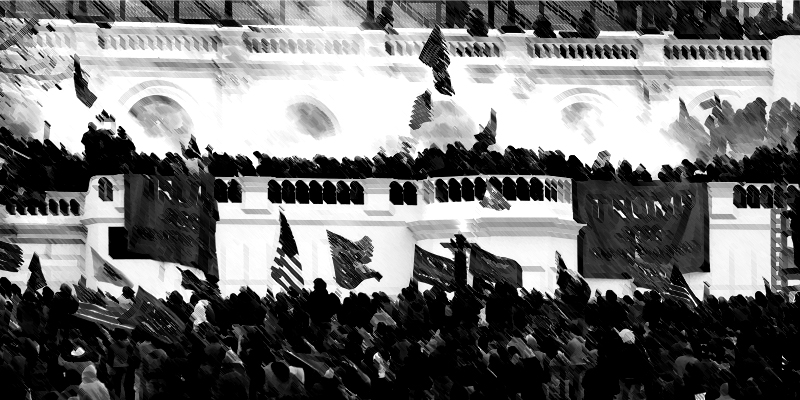 A South African crime writer on the resurgence of authoritarianism, fanaticism, and hate in the US and South Africa.

These days the world is seen increasingly—by white right-wingers—as split between ‘those who belong’ and ‘those who don’t belong’. This viewpoint is tacitly and openly encouraged by authoritarian, fanatical leaders whose ‘War Cry’ is to protect what is ‘Ours’.

Even as I write this, Trump entrenches himself in the White House for his last shameful days in the presidency, any chance of salvaging a modicum of grace quashed by his incitement of the storming of the Capitol by his supporters clad in bear skin and draped with the Confederate flag. On the cusp of leaving office, he’ll forever be branded as a wannabe-dictator common to all the ‘shithole’ African countries he dismissed and ridiculed because of the style of leadership he’s ironically adopted as his own. Apart from the myriad controversy that engulfs him, he has, up to this day, not condemned white supremacy.

It was interesting to me to see the ‘Proud Boys’, dressed in military gear and toting guns, roll up to cast their ballots in various conservative states, on 03 November, and to remind myself of the parallels between racist US and South Africa.

Going back a few decades in my own history, I lived in New Orleans (and later Houston) for a number of years as an adolescent and I loved it there. I loved the French Quarter, seeing shows and sipping mint Juleps, getting home by tram to the Garden District. But I also remember I had nightmares of a still active Klu Klux Klan; I saw horrific postcards of lynchings, those tragic pictures of innocent men caught and strung up in trees or from scaffolding simply because they were black; I had learned of the cruelty and destruction of the Civil War and the indignity of slavery and the devastating consequences.

When I returned to South Africa with my parents, heinous apartheid was in full swing; people of color had long since been removed from their rightful homes to so-called black and colored areas; had been tortured, detained and denigrated as second-class citizens, had been denied basic human rights. The parallels between segregationist Jim Crow-era America and South African apartheid were all too clear. The legalized discrimination in both countries left me feeling dirty—a party to crimes against humanity simply by my whiteness.

The parallels between segregationist Jim Crow-era America and South African apartheid were all too clear. The legalized discrimination in both countries left me feeling dirty—a party to crimes against humanity simply by my whiteness.

At last South Africa abolished apartheid, and the country breathed a collective sigh of relief. A feared and expected race war was avoided. Nelson Mandela was our new and honored president! We could hold our heads up as we were now ‘The Rainbow Nation,’ leading the world in human rights. Indeed, in the run up to the constitutional negotiation agreement in 1994, and the free and fair democratic elections, global interest rocketed at how Mandela and FW de Klerk had managed to steer South Africa towards a measure of race harmony.

In this almost euphoric time, after 1994, South African writers also enjoyed—without the constraints of writing to the struggle—the freedom of penning whatever stories took their fancy, and a slew of crime writers took the scene by storm, many of them exploring the transfer of political and economic power in a New South Africa, from white to black hands. Margie Orford, Richard Kunzman, Andrew Brown, Karin Brynard and Deon Meyer, amongst others, tackled the dynamics of a new racial order through police detective pairings of mixed race, and creating precincts where officers of all races and of equal rank, worked together to combat crime. South African Crime fiction was diverse and intriguing in content and style.

Margie Orford’s Clare Hart novels tackled gender issues through writing about sex crimes. Peter Church’s rollicking techno-thrillers took us to the dark side of the digital world. Deon Meyer, our most commercially successful thriller writer, best known for his detective, Bennie Griessel written in the mold of Michael Connolly’s Bosch, easily sells tens of thousands of copies of any one title in the South African market. Michael Stanley’s Botswanan Detective Kubu is celebrated worldwide, as is Tannie Maria, the small-Karoo-town sleuth created by Sally Andrew.

Getting back to the South African political front, a mere 25 years into democracy, various fissures have not only disrupted stability, but have broadened to dangerous proportions. State Capture—government-complicit corruption – has cracked the very democratic foundation so many fought for. Gender-based violence is considered an epidemic and Margie Orford has spoken, with reference to her novels, of men turning ‘unspent violence into a war against women.’ Xenophobia is common as demands are made by citizens of all race groups to secure borders and expel migrants and refugees.

And it is unsurprising, given South Africa’s long and deep history of racist segregation and white supremacist ideology, that conservative whites stake their claim to a country in which they feel ever more marginalized by the majority Black population. In general, world-wide, a sense of perceived ‘victimhood’ is more and more common as so-called ‘rightful’ citizens use globalization to underscore their own sense of disenfranchisement.

These issues of race, hate, but particularly the ideology of neo-fascism and white supremacy, became the driving force behind my novel, Divine Justice. I wanted to explore the age-old, yet sadly reemerging, issues around race and nationalism. I was interested in the re-emerging ‘hate’, and the re-emerging focus on the ‘threat of the other.’

This is where ignorant, unscrupulous leaders come more fully into the picture. Unlike leaders who promote a message of unity such as Nelson Mandela did, and Barack Obama and now Joe Biden, those who choose to divide rather than unify misunderstand the delicate balance between individual rights and responsibility to others. They manipulate the rifts between cultures, religions, and races, exploiting men and women vulnerable to suggestion. With Twitter and Facebook at anyone’s fingertips, hate speech proliferates without pause or intervention. Violence, motivated by self-righteousness, by moral or religious superiority—by racism—is pushed and proliferated.

Looking at South African white supremacist history, a number of white supremacist groups have operated, from the Ossewabrandwag (Ox Wagon Sentinel) in the 1930s to the Boeremag (Farmer’s Army) in the 2000s.The 1980s in particular saw armed groups emerge as the apartheid regime struggled to maintain its authority and legitimacy in the face of widespread internal resistance and international diplomatic and investment opposition.

One group, the AWB, Die Afrikaner Weerstandsbeweging (The Afrikaner Resistance Movement), built considerable conservative white Afrikaner support, attracted international attention, and committed acts of violence that threatened to start the race war so many feared. They believed fanatically, in their duty as God’s Chosen, to protect what they considered their birthright and their culture. The AWB paraded in khaki uniforms, on horseback, their rifles and neo-Nazi flags strung over their shoulders. They threatened to fight for their own Volkstaad, to provide whites with a homogenous ‘homeland’.

Indeed, such an ‘all whites’ town exists in South Africa, known as ‘Orania.’ Established in 1991, a year after Nelson Mandela’s release from Robben Island prison where he was incarcerated for twenty-seven years, Orania is devoted to protecting Afrikaner culture. Writer Tembeka Ngcukaitobi, however, points out that ‘Orania represents downright hostility to the idea of a single, united, non-racial country.’

Another contemporary group of South African right-wingers is ‘The Suidlanders’ (South Landers), survivalists who believe a purge of the white population—essentially a white genocide—is inevitable in South Africa. Fearing the worst for their white selves, this group prepares for a race war by storing food in bunkers, training recruits, and seeking allies in Europe and in the US. In fact, they successfully internationalized a narrative of white genocide through the horrific nature of farm murders, the allegedly purposeful killing of white farmers by a ‘third force.’ As land ownership is one of the central contentions in South African politics, race issues are amplified when heinous violence is perpetrated on farmland, by both sides of the color divide. In a strong tradition of True Crime, South African journalist Jonny Steinberg wrote about the murder of a white farmer in KwaZulu Natal in his book Midlands. In contrast, BBC journalist Andrew Harding’s recent book, These are not Gentle People, deals with a murder of two black men by a mob of white farmers in the Free State. Crime writer Karin Brynard’s Weeping Waters explores farm murder, and the age-old hostilities between cultures.

Trump himself is infamous for having picked up the narrative of alleged ‘white genocide’ in South Africa. After tweeting about the farm murders, South African white supremacy became an international focus.

In Divine Justice, my fictional white supremacist group, ‘The Core’, is loosely based on these groups, warped by their own particular brands of racism, as well as neo-Nazism. Not only is ‘The Core’ a threat to private investigator Rae Valentine, who is drawn into their malicious intent, but the group is seen as a threat to national prosperity as they carry out their hateful deeds—ATM bombings, and drive-by shootings of immigrants on the streets of Cape Town at the foot of the iconic natural landmark, Table Mountain. ‘The Core’ see themselves as redundant, and of course, their resentment and anger, fueled by a measure of idiocy, devolves to criminality.

Writers have always responded to their times. In over a hundred years of crime writing we’ve moved from cosy dens to the mean streets, to exposing fanatics and their hostile and poisonous crimes. Divine Justice focuses on the criminal mind, and on how people become racist; they are fed lies, often enough and long enough, that fuel intolerance and division, resulting ultimately in a loss of faith in the truth so obscured by false news and delusion.

As the ideologies of right-wing conservatism and liberal tolerance intersect, and clash, we’re sure to see more fanatics of all kinds wreaking havoc on the pages of our crime novels. The world over, tyrannical authoritarian leaders—whether president or prophet, empowered and emboldened as they gain followers—spew ugliness, misinformation, disinformation, mistrust of science, sexism and racism.

And of course, here’s hoping these groups, these miscreants, these racists, will, as the pages turn, be meted out the measure of justice they deserve. I’ve certainly done that in Divine Justice. 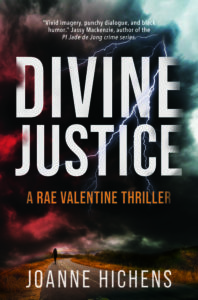 oanne Hichens is an author and editor living in Cape Town. She has published several crime novels, including Out To Score (co-authored), Divine Justice, Sweet Paradise, and for young adults, Stained and Riding the Wave. She has compiled and edited numerous short story collections, including Bad Company an anthology of South African crime fiction endorsed by Lee Child. Her memoir, Death and the After Parties, a memoir of loss, was published by Karavan Press in 2020.

There’s something deliciously intimate about a dinner party, don’t you think? The thrill of being included in a carefully...
© LitHub
Back to top