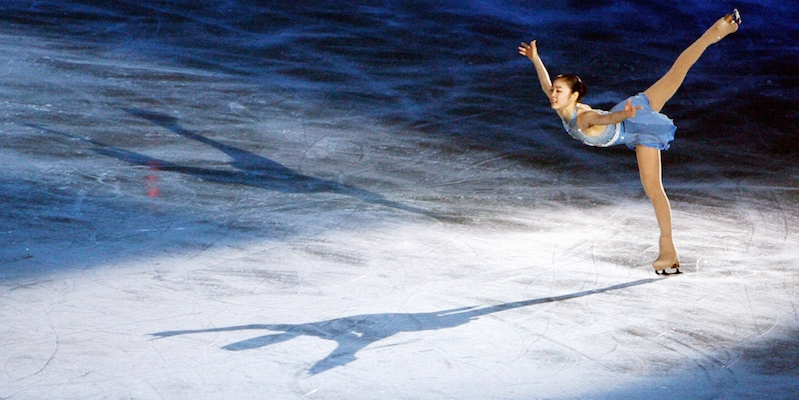 It looks blithe and glamorous, but it's one of the most dangerous and cutthroat activities imaginable

I have a deep, dark secret that I am now forced to share: I am obsessed with figure skating. As in OBSESSED in ALL CAPS.

I know that the Biellmann Spin, which is when a lady spins and with one hand grabs her skate blade to extend her leg high over her head, is named after Swiss Miss Denise Biellmann. I know that the Salchow jump—one of the six jumps in every figure skater’s repertoire—is named after Ulrich Salchow, Swedish skating superhuman and 10-time World Figure Skating Champion. And I know who Laëtitia Hubert is. French ice skater, one-time World Junior Champion, but notorious for falling four times in her long program at the 1992 Albertville Olympics. An unfortunate record she still holds. But she’s got an umlaut in her name, which is pretty cool.

Another thing I know is that figure skating is dangerous. To paraphrase the robot from Lost in Space, “Danger Michelle Kwan! Danger!”  It might look glitzy ‘n glamorous, but there’s danger in them there ice rinks.

Do not be fooled by the glittery costumes that look like they were designed by someone who has a Bedazzler gun as an artificial limb.  Or by the pretty girls with their painted faces and their hair pulled back in a ballerina bun and held in place by rhinestone barrettes.  Or by the sweeping classical music that accompanies so many of the routines. Figure skating is one of the most dangerous sports on the planet. If you don’t believe me just ask Nancy Kerrigan. She will forever be connected to the woman whose name still causes panic attacks among the figure skating elite—Tonya Harding.

The most notorious skater of all—long retired and banned from the sport—continues to cast a dark cloud over the skating community.  But as wicked as her legacy may be, there are more constant and pervasive dangers lurking just a few feet from the kiss ‘n cry.

Remember, this is a sport that has elements with names like Death Spiral, Death Drop, and Head Banger.

Remember, this is a sport that has elements with names like Death Spiral, Death Drop, and Head Banger. During practice warm-ups when up to eight skaters are on the ice at the same time, human collisions are commonplace. At last year’s World Championships there was an international uproar after American Mariah Bell’s blade sliced into South Korea’s Lim Eunsoo’s leg when Bell skated a spiral a little too close to Eunsoo. Japan’s ice god, Yuzuru Hanyu, was so bloodied after a collision with China’s Han Yan several years ago during the Cup of China that he actually skated with his head wrapped in bandages. And came in second.

But female pair skaters are probably the most affected by on-the-ice disasters. Jessica Dube’s cheek and nose were slashed so severely with the knife-sharp blade of her partner, Bryce Davison, that she had to have surgery to repair the lacerations. The scariest incident in recent years was when Ashley Cain-Gribble awkwardly fell out of a lift with such speed that her partner, Timothy LeDuc, couldn’t prevent her from landing headfirst onto the ice. She suffered a major concussion and had to undergo months of rehabilitation, but at the time of the horrific fall the referee didn’t stop their program by calling a medical emergency, which forced Ashley and Timothy to finish their program or risk being disqualified. That’s not only dangerous, it’s harsh.

It makes perfect sense that I would call upon my obsession to spread a little literary bloodshed.

In case you don’t know, I’m the author of The Ferrara Family Mystery series. Think The Golden Girls meets Nancy Drew with an Italian twist. Three old ladies—Alberta, Helen, and Joyce—team up with Alberta’s granddaughter—Jinx—to solve murders in their picturesque, lakeside community of Tranquility, New Jersey. But be warned, the name of the town is ironic and while Tranquility may look peaceful, it’s really a hotbed of homicide. That makes the hamlet a dangerous place to reside, but a perfect setting for a cozy mystery series.

In the first two books—Murder on Memory Lake and Murder in Tranquility Park—the ladies band together to form the unofficial Ferrara Family Detective Agency and bring the scoundrels responsible for contaminating their quiet enclave with murder and mayhem to justice.  However, in the third installment of the series—Murder at Icicle Lodge—I give Tranquility a respite from the manslaughter and take the Ferrara ladies and their closest friends on a road trip to another bucolic setting—Lake Ariel, Pennsylvania.  What is supposed to be a weeklong getaway to a Winter Wonderland quickly turns out to be a deadly excursion all thanks to, you guessed it, a figure skater.

She’s not only a classic cozy mystery villainous victim, but a classic ladies figure skater from a bygone era. If you don’t remember Pamela, don’t berate yourself, as she only exists in the pages of my book. And she doesn’t exist for very long. It is a cozy mystery, after all, and murder may not be gruesome, but it is de rigueur.

In the book, Pamela is a former Olympic gold medalist, who like Peggy and Dorothy, went on to international fame.  However, unlike those two all-American sweethearts, Pamela is not beloved by her inner circle.  She has enemies, she’s caused heartache, and at Icicle Lodge she pays for her crimes. The sheer glee I found in offing a celebrated ice skating icon was a bit unsettling I have to say.  For the first time as a cozy mystery writer I felt guilty for killing off a character.

Don’t get me wrong, I never hesitated or doubted how Pamela would meet her frosty maker. She is the centerpiece of the book and without her entrance and deadly exit there would be no story to tell. But I still felt bad for bashing a member of a community I adore.  What’s a writer obsessed with figure skating supposed to do?  Take figure skating lessons himself, that’s what!

Yup, shortly after I decided to end Ms. Gregory’s personal and professional careers, I embarked on a new hobby and started taking adult figure skating lessons at the Ice House in Hackensack, New Jersey. Now this is no run of the mill ice rink, this is an elite skating facility and former training ground of Johnny Weir, three-time U.S. men’s champion and part of the ubiquitous team of Tara & Johnny, and Sarah Hughes, who is the most unexpected ladies Olympic Champion ever in the history of figure skating.  Here’s a little cozy clue: The eagle eye reader will notice that Sarah’s glorious long program at the 2002 Olympics in Salt Lake City, Utah is the inspiration for Pamela Gregory’s own unprecedented Olympic triumph.

Now back to me. Perhaps it was a way to assuage my guilt for killing off Pamela or maybe it was the resurgence of a life-long dream to know what it’s like to glide across a frozen sheet of ice, but whatever the reason I enrolled in a Saturday morning skating class in the dead of winter. I was and still am—the oldest person in my class and I’m proud to announce that I am a level six adult figure skater.  And there are only six levels, thank you very much! If all goes well, by the time the fourth book in the Ferrara Family Mystery Series is published next year I will have passed my level six test and moved on to freestyle training with my own personal coach. After that, who knows?  Adult Figure Skating Competitions? Beijing 2022? I don’t know where I’ll wind up, but I do know that wherever my passion for figure skating takes me, it’s going to hurt.

Not only is ice skating dangerous, it’s painful. Because ice isn’t just slippery, it’s hard. The first time I fell—and I’m talking about a spectacular fall while practicing a new move and not just a slip onto the ice when you’re learning how to skate—I had the wind knocked out of me. I was trying to perfect a T-stop, which is a maneuver wherein you glide on one skate while the other is behind and perpendicular to the gliding skate. The heels touch to create a T shape and the back blade is dragged on the ice to bring you to a stop.  It’s not a difficult skill unless your blades lock, which mine did. When that happens your legs fly up into the air and you fall flat on your back, possibly banging your skull into the ice. Sounds like fun, right? Thankfully, I reacted quickly and tucked my body like I was going to do a forward roll so I landed on my butt. I was sore for a few days, but there was no permanent damage.

Besides honing my cat-like landing skills, figure skating has taught me how to be a better writer.  Even though the two professions are exact opposites of each other—one being cerebral and the other insanely physical—they share common traits that need to be adhered in order to achieve success. I call them the 3-D’s. Desire, dedication, and discipline.

Whether you’re a writer or a figure skater you need to want to tell a story or don a pair of skates and I’m talking about want with a capital W. Then you need to commit to practicing and honing your skills so you can write a compelling novel or land a perfect triple axel. And, finally, without the self-control to continue your practice and your individual journey to be the best writer and/or figure skater you can be, none of the other stuff matters. Just ask Janet Lynn or Janet Evanovich. Stephen Cousins or Stephen King. Scott Hamilton or Scott Turow. And so many others both on and off the ice.

Writing a cozy mystery series is a delightful endeavor because it’s amazingly rewarding, but also wildly challenging. There’s the rush that always comes after a novel is completed. But then the sobering realization that a cozy series never ends. One book is finished, one murder is solved, and another killer is lurking around a dark corner begging to be caught by the Ferrara’s. There’s simply no rest for Alberta, Jinx, Helen, and Joyce. Same goes for me! In order to keep my creative juices flowing with streams and streams of blood-red imagination, I need to write about things I love, things that inspire me, and things that make for good storytelling. Italians, family, and yes, figure skating.

I know it isn’t an accomplishment on the same level as winning an Olympic gold medal, but I am so proud to have given the world a story that combines three of my favorite things. Murder at Icicle Lodge isn’t just another entry in a cozy mystery series, it’s a novel that celebrates and honors a sport that I adore.

The fact that some blood is spilled is quite appropriate. Because ask any skater and they’ll tell you the same thing—figure skating can be murder. 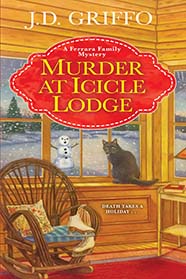 J.D. Griffo is an award-winning writer and a graduate of New York University. He has studied at Playwrights Horizons and Gotham Writers Workshop, and has written several screenplays. He is the author of the Ferarra Family Mystery series. His latest in the series, Murder in Tranquility Park, is now out from Kensington Books. Follow him on Facebook or on Twitter @Michael2264.
http://michaelgriffo.com/ 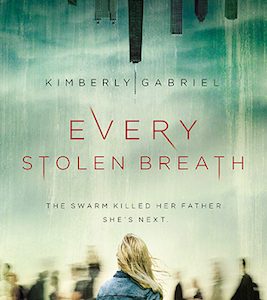 During advisory at the end of the day, while Mr. Mater drones on about a student council food drive and tryouts for the upcoming...
© LitHub
Back to top