Gaito Gazdanov’s The Spectre of Alexander Wolf, first published in 1947, has an opening line that signals the novel will concern itself with criminal psychology:

Of all my memories, of all my life’s innumerable sensations, the most onerous was that of the single murder I had committed.

The narrator, we learn, was 16 years old and fighting in the Russian Civil War. Separated from his unit, riding on flat land, he had just followed a turn in the road when his horse fell down dead from a single gunshot. He rose to his feet unharmed and saw a rider coming toward him on a huge white horse. Before the figure could get off another shot, he fired his revolver, killing the man. Looking down at his victim, he saw that he was about 22 or 23, and handsome. Fearful that the man’s unit would arrive soon, he took off, using the white horse. It was an intense experience, but as he puts it, “…this murder marked the beginning of my independence.”

Years later, the narrator is in Paris, working as a journalist. He has lived since the described incident with the certainty he killed a man. Granted, there was an element of self-defense to his act, and yes, it happened during wartime, but neither of these points diminish what he did in his mind. He took a life and considers it murder. Imagine his shock, then, when he falls into possession of a short story collection by an English author he has never heard of, Alexander Wolf, and reads a story within called “The Adventure in the Steppe” that exactly describes the shooting incident that stamped his life. More remarkably, the incident is described from the point of view of the man he’s sure he killed. He can only conclude “that the author of the story really was that same pale stranger whom I’d shot. To explain the complete convergence of facts with all their inherent peculiarities—right down to the color and description of the horses—by pure coincidence was, to my mind, impossible.” He becomes determined to find this author who must be using a pseudonym and cannot possibly be English. His search for the mysterious Alexander Wolf is what kicks Gazdanov’s novel into motion. As he states to someone about his quest, “This is beginning to resemble a detective story.”

A most peculiar detective story it is. Or should I say, it’s a detective story that falls within a particular Russian literary lineage. Alexander Wolf has an obsession with doubles and duality that dates back to Nikolai Gogol’s tales and Dostoyevsky’s story “The Double.” The way Vladimir Nabokov described his 1930 book about a Russian émigré in Berlin—The Eye—as “the pursuit of an investigation which leads the protagonist through a hell of mirrors and ends in the merging of twin images” could also apply to Gazdanov’s book. Nabokov’s narrator also inhabits a twilit émigré world where appearances are deceptive, and it’s hard to distinguish fate from coincidence, but in the end there’s a sudden violent act that creates a moment of absolute clarity.

The narrator of Alexander Wolf occupies an odd position. In crime fiction terms, he is both the criminal (for his presumed murder) and the detective. He is trying to clear up the mystery behind an act he committed. But his victim has dual identities, too. Poking around, the narrator learns that Alexander Wolf was named Sasha Wolf when he shot him, and that Sasha was an “adventurer, drunkard, philanderer.” So how did this man turn into the Alexander Wolf who wrote a book that’s qualities resemble Gazdanov’s writing, with “taut rhythm… precision of detail… unfaltering and seemingly everlasting unison of plot with very short, expressive authorial commentaries”?  The narrator becomes preoccupied with retracing “the history of this life in its double aspect.” Alexander Wolf’s fate interests him because, as he has the self-awareness to declare, “I, too, had suffered my whole life from an extraordinarily persistent and indomitable case of split personality, one that I had tried to fight and that had poisoned my happiest hours.”

But what about Alexander Wolf’s author? Who was this man talking about the Russian Civil War, exile, guilt, and philosophically nuanced murder? Gaito Gazdanov had fought in that war as a teenager, against the Bolsheviks, and then he went on to have what you might call a very 20th-century life. He left Russia in 1920, stayed in Turkey for a while, and then journeyed to France. Like Vladimir Nabokov, his senior by four years, Gazdanov became part of the Russian émigré community. He tried various jobs before settling into a routine as a nocturnal taxi driver in Paris. From his first novel and earliest stories, he received critical praise within the Russian expat world, but he would never come to the United States or go on to reach the international audiences that Nabokov did. For one thing, Gazdanov wrote in Russian throughout his entire career. He saw his work published only in Russian émigré journals. During World War II, he joined the French Resistance, and later in life he resided in Munich, where, during the peak years of the Cold War, under an assumed name, he hosted a radio program on Russian literature for Radio Liberty, an operation funded by the CIA. He died in 1971, and his works were not printed in Russia until the 1990s.

Gazdanov’s early work drew comparisons to Marcel Proust. These novels showed his versatility. He wrote about memory (An Evening with Claire), amorous relationships (The Flight), and the Parisian underworld he witnessed as a cabbie (Night Roads). But it was after World War II when, looking to increase the tension and urgency in his narratives, he decided to try a new direction, the crime story or thriller, and produced The Spectre of Alexander Wolf. He followed it up with another novel centered around a killing, The Buddha’s Return (1949).

This second experiment in genre-inflected storytelling is closer in spirit to noir fiction than his first. While the narrator of Alexander Wolf works, has a love affair, and delves into the mystery of a man he presumed to be dead, the narrator of The Buddha’s Return is somewhat aimless. Again, there is a Russian exile living in Paris and moving in émigré circles, but this time he’s a university student, without money or a job. To a degree that’s suggestive of later psycho noir fiction, he is an unreliable narrator, admitting to us that he has trouble distinguishing between reality and what goes on inside his head. He exists “as if surrounded by a thin veil of fog, one that deprived objects and people of their sharply defined contours.” He describes how he kills a man and then goes through a long trial, but the trial takes on such absurd aspects that the reader can’t help but wonder whether the whole episode is a vision. At a murder trial, would a man be accused of contradicting the Great Theory of the Central State which the foremost geniuses of mankind derived? A Kafkaesque humor pervades the narrator’s tone, but there is also the darkness of the most existential noir:

I had long grown used to these attacks of mental illness. Within what remained of my consciousness, in this small, troubled space that at times almost ceased to exist, but which nevertheless constituted my last hope of returning to the real world and not one darkened by chronic madness, I tried stoically to endure these departures and excursions. Yet every time I returned I found myself in the grip of despair.

As so much classic noir does, Gazdanov’s two crime novels muse on the twists and turns of fate. But with him it’s not that people can’t avoid their fate or that character is destiny; he stresses that fate works in odd ways. With his personal history, Gazdanov understood life’s disruption and flux, and what’s striking is how he embeds a tight investigation-driven plot within an overall structure that emphasizes life’s unpredictability. He does this in both Alexander Wolf and The Buddha’s Return. In Alexander Wolf, the relationships among all the characters prove complicated, and Gazdanov reveals their connections gradually, heightening suspense, leading to the perfectly set-up ending. In true mystery fiction fashion, the denouement comes as a surprise that anyone paying attention could have foreseen. The Buddha’s Return is looser in its plotting, saving its murder for about halfway through the book, but it too lays out a view of life that embraces wonderment as well as bleakness. When the narrator is accused of killing a man (this time the narrator is arrested for real, by flesh and blood police), he insists that he did not do it and had no motive. But unbeknownst to him, the victim has left a will bequeathing him his entire fortune. It seems as if fate has shaped itself to condemn him to death, but as things turn out, the true culprit is caught, a man who has a tangled history of his own that intersects with the victim’s. Freed from prison and now himself the inheritor of riches, the narrator mulls over the association he had with the deceased and “the fact that I knew practically nothing about the man to whom fate had bound me in such a strange and unexpected manner.”

Gaito Gazdanov died barely known in the West, but how lucky for us that he never faded into total obscurity. With these two books alone, he produced work that is by turns philosophical, romantic, tense. He can be funny, too, whether describing the hectic life of a freelance journalist in Alexander Wolf or the eccentricities of the characters in The Return of the Buddha (The police inspector interrogating the narrator during the murder investigation tells him that they found the narrator’s notes on the Thirty Years War in his room and that “I completely disagree with your conclusions, and in particular your appraisal of Richelieu.”). Gazdanov’s prose is both crisp and elegant, the pace of these novels fast. They are genuine page turners, gripping reads; it’s a little bit as if Vladimir Nabokov had merged cells with the Georges Simenon of the romans durs. His use of the crime and thriller forms is inventive. If you like the conundrums of Jorge Borges or Paul Auster’s New York Trilogy, my guess is that you’ll love Gazdanov. He’s meaty and fun.

Scott Adlerberg lives in Brooklyn. His first book was the Martinique-set crime novel Spiders and Flies (2012). Next came the noir/fantasy novella Jungle Horses (2014). His short fiction has appeared in various places including Thuglit, All Due Respect, and Spinetingler Magazine. Each summer, he hosts the Word for Word Reel Talks film commentary series in Manhattan. His new novel, Graveyard Love, a psychological thriller, is out now from Broken River Books. 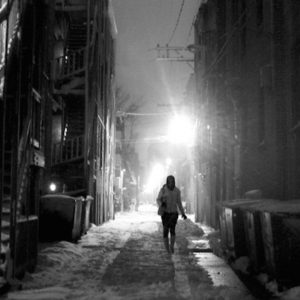 Writing a book about a murder meant steeping myself in fear. I had nightmares and bought extra locks for my house. For research,...
© LitHub
Back to top