Flynn Berry on the Perils of Writing About Murder

Writing a book about a murder meant steeping myself in fear. I had nightmares and bought extra locks for my house. For research, I took criminology classes and studied the Murder Investigation Manual for police officers in Britain. My research made me furious, and I still am.

There were times when I wondered why I hadn’t decided to write a book about, for example, Positano. Possibly a chef in Positano. Then my research would involve cooking risotto and drinking bellinis.

Instead I spent hours and hours hunched over the Murder Map. The site is a map of London. On the map are pins; each pin is a murder. The site records every known homicide in London. So you can go to a certain part of the city—Finsbury, for example—and read about the people who have been killed there.

I did this for so long. The problem is that it’s never finished; every week the map changes.

In a way, the site is admirable: it’s democratic, whereas newspapers only report certain crimes, favoring a certain type of victim.

Yet. It’s hard not to feel like a voyeur. Some cases have so much detail, like the one in which a stalker broke into a woman’s home, and her three daughters tried to defend her. But they couldn’t, and he killed her in front of them. The site says the eldest daughter was overhead that night saying, “Did I do enough? … Do you think mummy will be mad?”

I can’t imagine how the girl—a young woman now—must feel about having that information about her available online, under her name.

For less lurid research, I took criminology classes. The other students in my seminar were Ph.D. candidates, all of them accomplished and familiar with criminal justice. One of them is an assistant district attorney now. I introduced myself as a writer, and then spent the rest of the course pretending to also be a doctoral student.

We did a unit on the fear of crime. To measure it, a study asked, “Is there anywhere near where you live—that is, within a mile—where you would be afraid to walk alone at night?”

I found this question absurd. Of course you could find a place a mile from your house where you wouldn’t want to be alone late at night. A mile-wide circle from my home included an isolated creek trail and an underground parking garage.

No one else in the seminar seemed to feel this way. They found it sad that so many people said yes. I nodded, with my legs crossed, my hands folded in my lap. I decided not to mention the creek trail or the parking garage.

But the research—the case studies and news articles—was working its way into my bones. Sometimes while writing I would leave my desk and stand at the top of the stairs, listening, since I thought I’d heard someone at the door trying to come inside.

I started to feel hunted. About six months into the book, I went to a hardware store. I picked up a box cutter, put it down. From my class, I knew that it’s best not to elevate the level of violence during an attack. Instead I bought extra locks for my house. Bike locks for the windows, and a swing lock, like you find in a hotel, which I drilled into the front door.

For my final paper, I wrote about the fear of crime in early modern Europe. I’d thought that fear of crime was a modern invention, possibly to do with mass media. But in England, between 1500 and 1700, the murder rate was about five to ten times higher than it is today, and a lot of people wrote about being terrified at night.

This was strangely comforting.

Cities like Copenhagen, Parma, and Nuremberg closed off roads at night by hanging iron chains across them. The chains were set at waist height, and used to enforce curfews. Chains were also strung underwater across the Seine and canals in Amsterdam to prevent boats from gliding through a city at night.

And householders in early modern Europe used ropes and bells, locks, window bars, iron spikes, and traps to protect their homes from intruders.

So setting an alarm system isn’t a new habit, and neither is keeping a guard dog. In the port town of Saint-Malo in northern France, giant mastiffs patrolled at night. While reading about the guard dogs in Saint-Malo, I looked at my foster pit bull, curled on the floor with her head resting on her paws. I liked having her in the house, even though she was completely gentle.

The research felt like a free-fall. All of those stories I’d tried to ignore, or read with one eye closed, I was studying now. They didn’t become any easier to read. My tongue still turned heavy in my mouth; my stomach twisted.

During one bad night, I pushed my dresser in front of my bedroom door. It was heavy—not heavy enough to keep the door from opening, but I figured the sound of it scraping on the floor would wake me up. Then I pushed a bookshelf against the dresser. I remember thinking that this was starting to be a problem.

Our class learned that women report being far more scared of crime than do men. I worried that by writing about a female victim, I was only adding to this fear. I hate that when a tv camera follows a woman down a street at night, it’s generally because she’s about to be attacked. I hate how certain victims are fetishized and others are blamed. And these stories aren’t accurate. Men are far more likely to be murdered than women.

The difference, though, is that women are far less likely to be the perpetrators. Globally, men were responsible for 95 percent of murders, in a 2013 study by the UNODC. And, statistically, women don’t kill other women—it’s the least common form of homicide.

When I was very young, I read a mystery in which a woman is walking alone at night. She’s frightened; there have been crimes in the area. She sees a woman coming toward her, in low heels and a dress, and rushes to her. And the moment when she realizes it’s actually a man, the killer, disguised as a woman, is sickening. All my life I’ve looked for other women to know I’m safe.

And that’s why I wanted to write about a female avenger. This character, of course, has a long and storied past—because I don’t think it’s possible for women to have this much fear without fury. One of the Furies herself, Tisiphone, is the avenger of murders. In the Aeneid, she’s wearing a blood-soaked dress, and she’s ready.

Flynn Berry is a graduate of the Michener Center for Writers and has been awarded a Yaddo residency. Under the Harrow is her first novel. 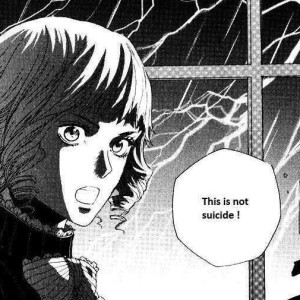 On August 22, 1856, private detective Allan Pinkerton looked up to see a woman standing at the door of his Chicago office....
© LitHub
Back to top