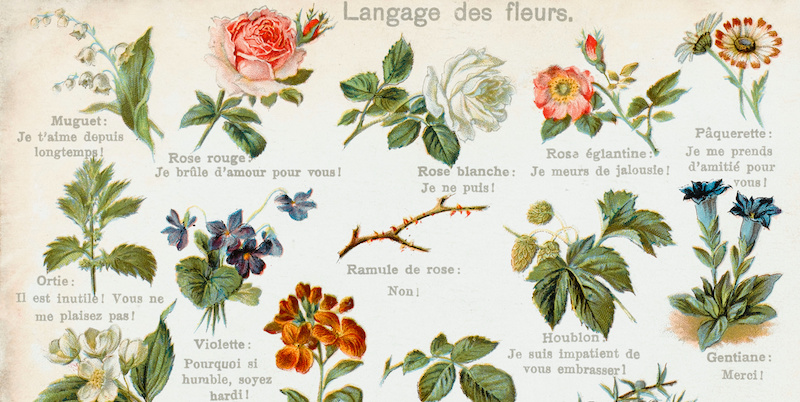 "Almost any plant—and many I’d never heard of—can be used to send a message..."

Imagine a walled garden buried deep in the English countryside where every flower or plant has been chosen to send you a message. Now imagine that the person who sent you the message is dead and that the key to deciphering the message has been lost.

Loosely speaking, that’s the idea behind my debut novel, The Walled Garden.

Halfway into my novel, I realized I needed a code that two gardeners writing to one another in the 1950s might use. Elizabeth Blackspear, a deeply reserved English poet who’s dealing with a potentially scandalous personal crisis, needs a way to express her feelings to her friend and only confidant, Amanda Silver, in California. I’ve always been fascinated by the idea of one person giving another flowers that might appear to onlookers to be just a casual bouquet, but with the power to communicate secrets only the recipient would be able to understand.

That started me off on a deep dive into the intriguing Language of Flowers. Almost any plant—and many I’d never heard of—can be used to send a message, even fruits like apples and peaches. As a gardener myself, I’ve been given copies of The Language of Flowers, including one of the most common, Routledge’s 1884 edition illustrated by Kate Greenaway. Based on Greenaway’s charming drawings of women and children dressed in nineteenth-century finery, I could just imagine some poor frustrated Victorian soul inventing this whole elaborate deal just so he could tell his beloved, “I love you” or “Meet me in the garden at midnight” without sparking scandalous gossip or irreparably compromising his beloved’s reputation, Bridgerton-style.

Plants and flowers have been used as symbols as far back as the Bible, and authors as varied as Shakespeare, Jane Austen, Charlotte and Emily Brontë, Frances Hodgson Burnett, John Steinbeck, Agatha Christie, and J.K. Rowling have all used the language of flowers in their writings. But I found out that floriography (aka the language of flowers) actually has its roots in 17th century Ottoman Turkey and its passionate obsession with tulips. Mary Wortley-Montagu is credited with introducing the floriography craze to England in 1717, and the Dictionaire du language des fleurs, which came out in France in 1809, is believed to be the first published list associating flowers with symbolic definitions.

But floriography didn’t truly become popular in the West until the Victorian era, so they didn’t actually invent the Language of Flowers as I’d originally thought; in a famously repressive age, they simply re-discovered it and used it.

The language of flowers seemed like the perfect code to give my characters, Elizabeth and Amanda. But I quickly ran into problems. For one thing, there aren’t flowers to say some of the things I needed them to communicate—for instance, I looked for plants to convey emotions like forgiveness, regret, and I’m sorry over and over again, and was surprised every time not to find them there.

The next problem was that some of the plants listed aren’t common now, or were called by names that have fallen out of use and are almost impossible to trace. Some of the flowers I wanted to use weren’t listed at all. And some of the meanings are so impossibly Victorian, it’s hard to imagine a twenty-first century context for them, like Thy frown will kill me (black currant), or Beauty is your only attraction (Japan rose).

There’s also that morbidly dramatic Victorian preoccupation with death: I die if neglected (Laurestina), or I shall not survive you (black mulberry). Really, if you were dying, you would find and give someone Laurestina (I had to look it up: it’s a kind of Viburnum) or black mulberry? What if they weren’t in season?

Then there’s the simply incomprehensible—at least to the modern mind—like Worth sustained by judicious and tender affection (pink convolvulus) or Your qualities, like your charms, are unequalled (peach), or even Your qualities surpass your charms (mignonette).

All this was fun to think about, but it led me quickly to another realization: for Elizabeth and Amanda to be able to communicate using the language of flowers, they would have to be going off the same source. Over time, certain flowers have become intimately associated with certain emotions, like red roses for love, olive branches for peace, and cypress for death or grief. But many flowers have varying meanings depending on which source you’re consulting: for example, in some versions, daisies mean innocence, but in others, attachment.

And then, when you come to roses, it gets even more confusing. Red roses are the flower most often associated with love, but in Routledge’s version of The Language of Flowers, a deep red rose means Bashful shame. A single rose (color unspecified) means Simplicity. And a rose, “Full-blown, placed over two Buds,” means Secrecy. A white rose says I am worthy of you. But if it’s a withered white rose, then it says Transient impressions.

Clearly, you had to know your roses!

Since there weren’t flowers to express all the things she wanted to say, Elizabeth concludes that she will have to create her own version. As she writes to Amanda, “I must find a way to write the truth in my own Language of Flowers.”

And then, for there to be a mystery, it had to be lost.

But as I was writing, something unexpected started to happen. Like a wily vine, the language of flowers began to twine itself into the novel in other ways. I discovered that there’s a rose called Maiden’s Blush, with a meaning that haunted me: If you love me, you will find it out—and I knew I had to find a way to use it in the book.

Here’s the description I wrote of it for The Walled Garden: “Maiden’s Blush. Flesh pink, loosely double, rosette-shaped flowers. A classic introduced in Britain between 500-1499 AD. Once you have smelled this rose, you will never forget it.”

But it’s one thing to give someone a bouquet or write a letter using flower references with meanings based on the language of flowers, and a much trickier proposition to create a whole garden based on those meanings, especially given how much gardens change over time. Still, when my protagonist, Lucy Silver, Amanda’s granddaughter, pushes open the ancient wooden door into this neglected walled garden in 2009, long after Elizabeth and Amanda have passed on, the first plant she sees is an iris.

Though she doesn’t know it then, in the language of flowers, iris means Message.

And against the far wall, a rambling pale pink rose has all but smothered a statue of Flora, the goddess of flowers.

Yes, you guessed it—Maiden’s Blush. If you love me, you will find it out. 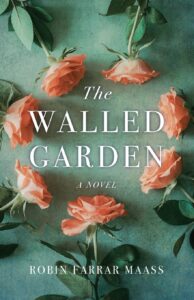 Robin Farrar Maass is a lifelong reader and writer who fell in love with England when she was twenty-two. She enjoys tending her messy wants-to-be-English garden, painting watercolors, and traveling. She lives in Redmond, Washington, with her husband and two highly opinionated Siamese cats. The Walled Garden is her first novel, and she's already at work on her next novel set in England. 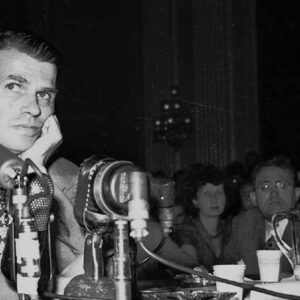 How difficult it seems, gazing back just seventy years to the late 1940s and 50s, to truly appreciate what a confusing and fraught...
© LitHub
Back to top