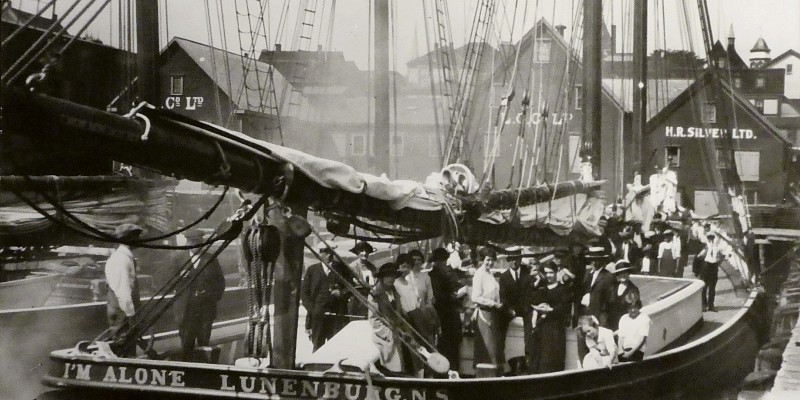 The Sinking of the I'm Alone

When U.S. Coast Guard cutters shelled and sank the Canadian rumrunner I’m Alone in the Gulf of Mexico in March 1929, one of its crewmen perished. Meet Captain Jack Randell, the scrappy smuggler whose daring exploits turned deadly—and sparked an international incident.

Rifle and machine-gun bullets ripped through the sails and rigging of the booze-laden Canadian schooner I’m Alone on a March morning in 1929. Shells from the deck gun of a U.S. Coast Guard cutter blasted holes in the rumrunner’s hull and it began to sink, bow-first. Skipper Jack Randell, struggling to stand on the sloping deck, remained defiant. “No, damn you!” he shouted as he jumped into the sea. “You may sink me if you like, but I will not surrender!”

One of I’m Alone’s eight crewmen drowned before he could be fished from the Gulf of Mexico. Randell and the survivors were taken ashore and locked up in New Orleans. By his own admission, he had been trying to smuggle liquor into the U.S., still bone-dry after a decade of Prohibition.

But I’m Alone was well outside American waters—and possibly beyond the reach of U.S. law—when it was sent to the bottom. Washington insisted the notorious rumrunner had been within U.S. jurisdiction when the pursuit began, justifying the attack and capture.

While the schooner flew the British flag, it had been registered in the port of Lunenburg, Nova Scotia. In Canada, Randell was hailed in the press as a hero for defending his country’s honor and defying his attackers. A Canadian member of Parliament condemned the sinking as “an act of deliberate piracy” at best, “an act of war” at worst.

Randell’s dash for freedom and the Coast Guard’s dogged pursuit escalated into an international incident.

There was nothing strange about finding one of the Lunenburg fishing fleet’s sleek schooners engaged in the shady business of rumrunning. Once Prohibition became law in the U.S. in 1920, there was no shortage of seasoned Canadian sailors and fishermen willing to supply illegal booze to America’s speakeasies and blind pigs. A cartoon published in the Literary Digest soon after the Eighteenth Amendment made it illegal to manufacture, transport or sell “any intoxicating liquor” depicted alcohol leaking into the parched U.S. from a stockpile of bottles and barrels in Canada. 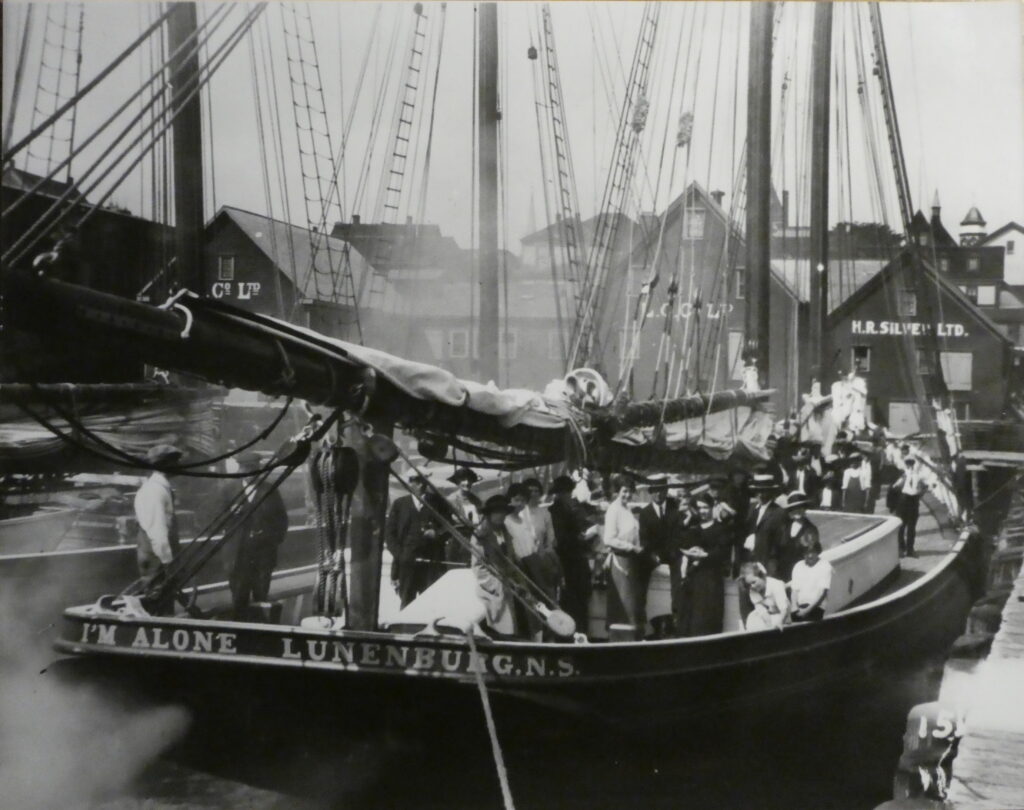 All a Canadian captain had to do was drop anchor just outside American waters at a prearranged spot and wait; speedboats from the mainland would show up to ferry the lucrative cargo ashore, taking all the risks. As the decade progressed, however, such small-time operators were squeezed out by large syndicates controlled by Americans.

One of these rumrunning organizations sent an agent to Nova Scotia in the fall of 1928 to find a vessel and skipper. The 125-foot schooner I’m Alone, fitted with powerful diesel engines, could carry plenty of booze and still outrun the Coast Guard’s fastest vessels. Randell, recruited as captain, jumped at the chance to spend, as he put it, “a winter in tropical waters at good pay.” Newfoundland-born and a decorated First World War veteran, he was a rogue who never shied away from a fight. His motto? “Once a scrapper, always a scrapper.”

In November 1928, Randell sailed I’m Alone to St. Pierre and Miquelon, French-held islands off the coast of Newfoundland where it was legal to buy and export liquor. His rendezvous with boats from the U.S. was at Trinity Shoal, about twelve miles off the Louisiana shoreline. He used a simple but ingenious method to confirm he was dealing with the right people—his bosses had supplied him with dollar bills torn in two, and he off-loaded his cargo to boatmen who produced the other half.

For the next few months I’m Alone made regular runs between that point and Belize, the capital of British Honduras. In February 1929, I’m Alone was shadowed for two days by the Coast Guard vessel Dexter, commanded by Captain A.W. Powell. On the second night of the pursuit, Randell managed to slip away in the darkness. Word soon reached Belize that Dexter’s captain was determined to seize the elusive I’m Alone.

On the morning of March 20, Randell dropped anchor at a point he estimated to be between fourteen and fifteen miles off the U.S. coast. I’m Alone was laden with scotch, rye, rum, and assorted champagnes and liqueurs. About dawn, spotting the steam-driven Coast Guard cutter Wolcott closing in from the west, Randell made a dash toward the open sea.

By half-past six, Wolcott was close enough to hail I’m Alone. When there was no response, Wolcott’s captain fired three blank rounds and again issued an order to stop. “I’ll see you in hell first,” Randell bellowed back through a megaphone. “I’m on the high seas and you have no jurisdiction over me.”

After a three-hour chase, Randell finally agreed to let Frank Paul, Wolcott’s commander, come on board to discuss their jurisdictional dispute. Paul rowed over to I’m Alone as his crew kept the deck gun, now loaded with a live round, trained on the schooner.

Randell contended the Americans had no jurisdiction over his vessel. I’m Alone’s position when sighted by Wolcott was “a matter of navigation,” Randell insisted, “and if I am nothing else in the world, I am a navigator.” He reckoned he had been at least fourteen miles offshore.

Paul was just as certain the schooner had been less than eleven miles offshore when spotted. Under a doctrine known as hot pursuit, he had the right to stop and search a suspected rumrunner sighted within twelve miles of the U.S. coast, no matter how far the chase extended into international waters. After making no progress through diplomacy, Paul returned to Wolcott. 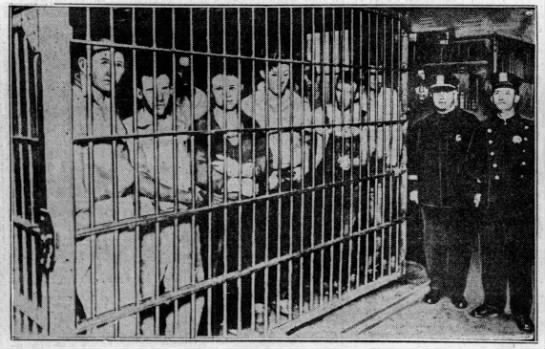 A press photo of the crew of the I’m Alone behind bars in New Orleans after the March 1929 sinking. Captain Jack Randell is at the extreme left.

The two vessels maintained a southerly course into the Gulf of Mexico. Then, about two in the afternoon, Paul decided to take more decisive measures. Wolcott steamed up to the schooner flying signal flags demanding: “Heave to or I fire.” Randell ignored the ultimatum, and Wolcott began firing shells into I’m Alone’s sails and rigging. When Wolcott’s deck gun jammed, the crew opened fire with rifles and machine guns.

“Suddenly, I felt a sharp blow in the front of my right thigh,” recalled Randell. “The whole leg went numb. I staggered, but I caught my balance.” Luckily for Randell, he had been struck by a dummy bullet made of wax.

Wolcott ceased firing and dropped astern, but refused to give up the chase. At dusk, I’m Alone’s crew hauled down the Union Jack and discovered it was in tatters. Newfoundland was still a British colony and Randell, incensed by this blow to the flag of his birthplace, signaled Wolcott: “Captain, you have made a grave error. You have mutilated my flag.”

The pursuit continued for two days. By March 22, buffeted by rough seas and gale-force winds, I’m Alone was well over two hundred miles off the U.S. coast. Wolcott had radioed for help that morning and Dexter joined the chase. Dexter’s captain, Powell, had been outwitted by Randell once; he was determined it would not happen again. He issued a final order to stop, then opened fire.

Dexter went into action like a miniature battleship. “Explosive shells, machine gun bullets, rifle bullets, came whistling at us point blank at a range of less than 200 yards,” Randell recalled. The crew gathered at the stern as I’m Alone was shot out from under them. When water began to rush into the hold, Randell ordered his men to abandon ship. He clung to a cabin door until he was hauled aboard one of the cutters. Crewman Leon Mainguy drowned.

From his cell in New Orleans, Randell blasted the Americans for launching “the most cowardly attack on a merchant ship since the submarine warfare” Germany had unleashed during the Great War. He and his crew were soon released; with all evidence of booze-smuggling lost in the sinking, the Americans were forced to withdraw charges of conspiring to violate Prohibition laws.

International law recognized a country’s sovereignty within three miles of its coast, and treaties had extended the reach of U.S. customs laws to twelve miles offshore. But could this justify a pursuit from the Louisiana coast to a point that was halfway to Mexico? The New York Times, which initially welcomed the destruction of a ship that had “long laughed at the vigilance of the marine enforcers of prohibition” soon had second thoughts. The Coast Guard, it concluded, did not have the right or the power to “shell and sink an unarmed foreign merchantman” on the high seas. The League of Nations announced a review of “the problem of policing territorial waters” in a bid to clarify an “ill-defined” area of international law. 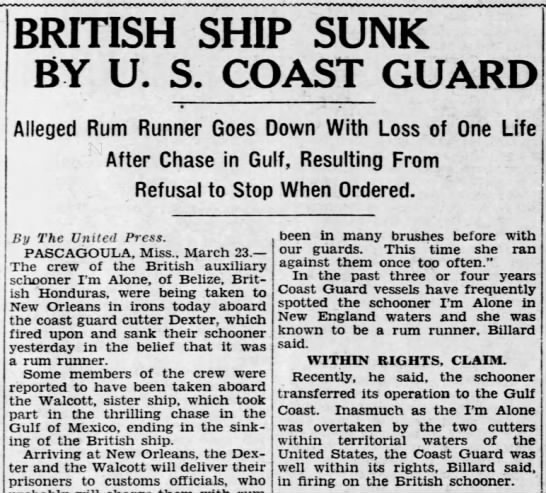 The I’m Alone incident marked a milestone in American-Canadian relations. The British, who had previously micromanaged Canada’s foreign affairs, put the diplomatic and legal battles that followed in the hands of Canada’s newly established legation in Washington. The Canadian government protested the sinking and demanded $387,000 in compensation for Randell and his crew and the family of the seaman who died.

The U.S. government fought back, claiming Randell had brandished a revolver during the chase. And sea conditions had been too rough to risk dispatching a boarding party, leaving the Dexter’s captain no choice but to open fire. Confirmation that the I’m Alone had been American-owned, despite flying a foreign flag, weakened the Canadian case. Randell denied being armed, but his rashness and bravado had put his ship and crew in danger. Had he obeyed the Coast Guard’s orders to surrender, Mainguy and his vessel would have been spared.

The dispute went to arbitration and was finally settled in 1935. The U.S. government formally apologized for sinking the schooner and paid $50,000—just under $1 million in today’s terms—as restitution to the crew. By then, Prohibition had been repealed and Americans did not have to rely on smugglers and underworld gangs to quench their thirsts.

As for Randell, he reveled in his notoriety and published an autobiography in 1930 entitled, fittingly, I’m Alone. But his freewheeling days on the high seas were over. The brash rumrunner who had sparked an international incident ended his seafaring days as master of a small steamer plying the calmer waters of the Great Lakes.

10 Debut Novels You Should Read This Month 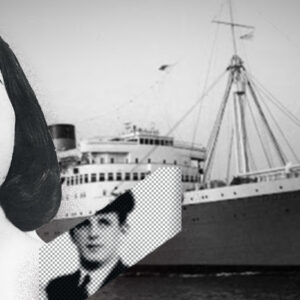 By ten a.m. on the morning of Saturday, October 18, 1947, the awful word had gotten round among the other fifty-nine first-class...
© LitHub
Back to top