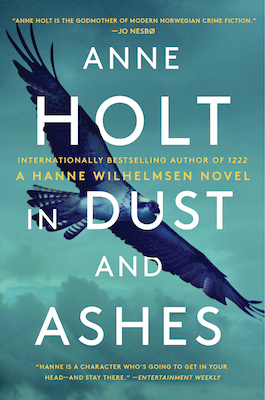 In the following exclusive excerpt from In Dust and Ashes, by Anne Holt, a policeman about to retire comes across a man he sent to prison long before, despite doubts about his level of guilt. Holt the Scandinavian queen of crime fiction, who writes the best-selling and widely respected Hanne Wilhemsen series.

Only a couple of weeks left, and then it would all be over.

And everything could begin.

Their new life, he and his wife in Provence. She was the one who had insisted on a move. He couldn’t speak French and didn’t drink wine, but at least the climate down there was appealing. He had been in the police since 1978 when he had entered what they had then called Police College, and it was high time he found something else. Dog breeding—that was what he and his old woman had decided on.

A whole lifetime had gone by since the end of the seventies—a couple of generations of Norwegians and thirty-nine sets of trainee officers. Or police students, as they had snootily come to be called over the years. He himself had started in the police force when they used pen and paper and the odd IBM golf ball typewriter and the youngest officers were more than content to be known as constables. A few months ago, he had been promoted to the rank of superintendent, less than six months before everything came to an end. Having turned fifty-eight in the middle of January, he could pack up the odds and ends in his office and walk out the doors at Stovner Police Station for the very last time.

Kjell Bonsaksen was a contented man in most areas of life. He had no intention of looking back; after all, it must be possible to get a decent beer down there in Provence. His son was an only child and their two grandchildren half French, so it actually hadn’t been too difficult to persuade him to move closer to them. They had sold their terraced house in Korsvoll following a furious round of bids for a sum that had caused him to blush. A good chunk of money was left over, even when the little house outside Aix with the sprawling, overgrown garden was paid in full.

He wouldn’t be able to eat so many hot dogs down there, when his wife could keep an eye on him all the time.

Placing a fifty-kroner note on the counter, he received some change in return and dropped it into his pocket. He zigzagged a generous portion of ketchup over his hot dog, shaking his head when the assistant pushed the bottle of mustard toward him.

Through the large windows, he glanced at the gas pumps. The weather was horrendous, as it had mostly been all through Christmas. Plump, wet snowflakes melted before they reached the ground, and everything was in shades of gray. A parked trailer truck blocked his view of the E18. It would probably be red once it was washed.

A man came walking toward the automatic doors. Tall, he had most likely been good-looking at one time. Bonsaksen was not a particularly adept judge of that sort of thing, but there was something about the wide mouth and the extremely straight, symmetrical nose. As the man entered, he looked up and straight at him.

Kjell Bonsaksen froze in the middle of chewing.

There was something about those eyes.

The man stopped for a moment, so briefly that it was actually more a matter of slowing down midstep, before resuming his pace. He was holding an empty cup in one hand, and without a word to the fellow behind the counter, he filled it with coffee from a dispensing machine on a table by the window.

Article continues after advertisement
He had only thirteen days left of his solid, if somewhat nondescript, career.

Bonsaksen was a dependable police officer. Never exceptional, and this final promotion had probably been the police chief’s way of saying thanks for long and faithful service rather than real acknowledgment of his suitability to be in charge of very many subordinates. His forte was working hard and according to the book, being honest and exact, and he was never tempted to take shortcuts. He was a workhorse. Policemen of his ilk were a dying breed. It had bothered him for some time, but now he couldn’t care less. He had only thirteen days left of his solid, if somewhat nondescript, career.

As a police officer of almost forty years’ experience, what he was proudest of was his memory. A policeman had to be able to remember: names and cases; relationships and faces; crime scenes; perpetrators and victims. You had to have some glue up top.

Although the man at the coffee machine had lost most of his hair and was also much thinner than the last time they met, Kjell Bonsaksen recognized him as soon as they exchanged glances. His big eyes were unusually deep-set in his skinny, almost gaunt face.

They radiated nothingness. Neither curiosity nor evil. No trace of pleasure, not even that the stranger had also recognized him. They contained not a sliver of reproach as the man placed the lid on his cup and, with steady steps, approached the hot dog–munching policeman. He stopped a few feet away from him.

“You knew I was innocent,” he said softly.

Kjell Bonsaksen did not answer. He had more than enough to do, struggling to swallow an oversized chunk of hot dog, roll, and ketchup.

“You knew it,” the man repeated. “And yet you did nothing.”

He let his gaze linger on Kjell’s face for a second or two before giving an almost imperceptible shrug as he turned on his heel and headed for the exit.

Kjell Bonsaksen stood lost in thought, a half-eaten hot dog in his hand, until the stranger climbed into the trailer truck that might have been red and drove out onto the highway in the direction of Oslo.

“Maybe so,” he said, so quietly it was possible he only thought it.

“Maybe it’s true that I knew you were innocent.”

One extra cup of coffee would cost him everything.

One extra cup of coffee would cost him everything.

If only he had left it there. Then the day would have progressed like every other December day, and they would have celebrated Dina’s third birthday the following weekend. As a matter of fact, it might just as easily have been his fumbling with the bunch of keys that proved so fatal. Earlier, he had cut his thumb on a can of mackerel. Dina had been allowed to be his nurse. She had used a whole roll of gauze bandage, loosely fastened with a Donald Duck adhesive bandage. He should have done it himself. That would have saved the necessary seconds, sufficient time to let the day follow its customary, safe course to evening.

It might also have been something else entirely. Anything at all, really, of all the inconsequential things that took place on that ordinary, rain-sodden, Advent morning: any one of a number of things that happened or didn’t happen. If he hadn’t overslept, for example. If he hadn’t taken that third cup of coffee, or even if he hadn’t drunk the second one down to the dregs. A couple more gulps would have been enough for them to reach the road a bit later, and maybe he could also have resisted checking the mailbox because he knew they were running late.

He did the calculations later, when his whole head was swarming with reflections about time and he spent a whole day ensconced in the massive spruce tree in his neighbor’s garden. It grew right beside the mailbox that he had torn down that same morning and smashed to smithereens with a sledgehammer. He sat there, just before Christmas, on a sturdy branch, aloft and unseen by passersby, counting the cars that drove past the little exit road from seven o’clock in the morning until seven o’clock at night. He arrived at a total of sixteen. If he calculated five seconds for each, five seconds when a potentially dangerous situation could arise when a soon-to-be-three-year-old child ran out into the road while her father was opening the mailbox and crossly starting to sort out the junk mail, it totaled no more than eighty seconds. Twelve hours, those twelve hours when it was feasible for Dina to be outside, beside the mailbox, while something distracted her father and she, for a fleeting millisecond of time, was not properly supervised, amounted to 43,200 seconds. So, in eighty of those seconds, something could happen.

In less than two-thousandths of that time.

If only he had taken some time to return the milk carton to the fridge, nothing would have happened.

It was Jonas who screamed. Dina made not a sound.

He yelled the moment before, when his life had not yet fallen apart, and he saw her stumble. It was Jonas who roared so loudly that the driver braked abruptly. It was Jonas who desperately tried to shove the car back, away from Dina, who was still lying wedged under the left front wheel. It was Jonas’s scream that made the baffled driver roll down his window, without understanding any of it, until he finally let his BMW trundle on a few feet or so.

In the years that followed, the scene never released its grip on him. Dina’s fall in front of the winter tire. The look she gave him as her open mouth drained of color and turned almost white under the dim streetlight. The seconds when he stood with Dina in his arms, realizing what had happened, without yet possessing any capacity to comprehend it. All of it, image by image, turned into a horror film that kept him awake when he ought to be sleeping and exhausted him so much that he fell asleep when he shouldn’t.

He would remember that tableau forever. The blue snowsuit and the pink hat he had attempted to straighten before the police arrived. Dina’s eyes that stared through and past him. The day care bag on the ground and what was inside it. The Donald Duck bandage and the bloody gauze that had fallen off when he picked her up. The smell of feces as they leaked from Dina’s diaper before the blue lights approached. Jonas would never forget the driver who kept talking on his phone while he sobbed endlessly in a nauseating cloud of aftershave.

“It was my fault,” Jonas shouted at him, over and over again. “It’s not your fault.”

That was the only thing he said on that morning when he lost his only child.

Excerpted from In Dust and Ashes by Anne Holt. English translation copyright © 2017 by Anne Bruce. Excerpted with permission by Scribner, a Division of Simon & Schuster, Inc.

11 Crime Books You Should Read in May 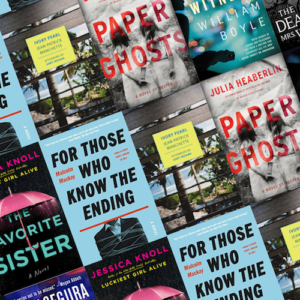 11 Crime Books You Should Read in May At the start of every month, the CrimeReads staff members look over all the great true crime, thrillers, mysteries, and crime...
© LitHub
Back to top