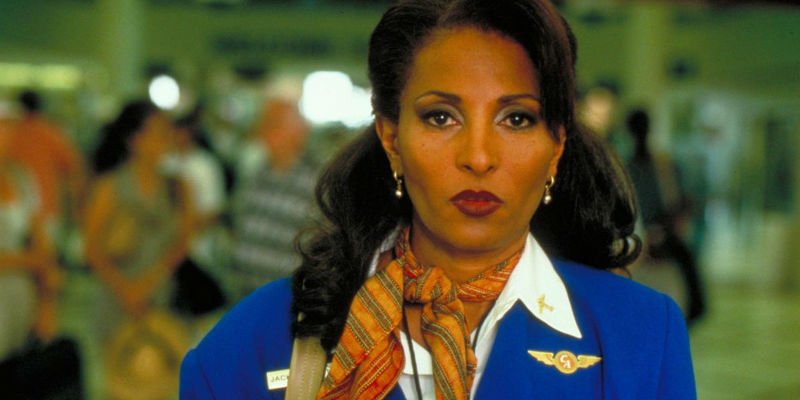 Depending on their ages and viewing habits, some fans of Pam Grier (who was born in 1949) might know her primarily through her title role in Quentin Tarantino’s 1997 movie, Jackie Brown, or perhaps via some of her work in television over the last few decades. But aficionados of cult films knew long before Jackie Brown got made that Grier is a long-established cinematic icon who cemented her dual status over the early-to-mid 1970s.

Grier was a leading figure of two different cutting edge 1970s movie genres: women in prison films and, more significantly, Blaxploitation cinema. Her sexy, tough, and independent characters in these feature films—strong black women—made her a prominent figure not just in the movies of the era, but also in the black power and women’s liberation social movements. She is seen by many as the first real female action movie star, via her work in influential films such as Coffy (1973) and Foxy Brown (1974). Anyone who is interested in Grier as a creative artist and/or celebrity, should know her work in the movies of the 1970s.

Grier got her start in acting without having to break a sweat. While working as a receptionist at an L.A.-based theatrical talent agency (one of three jobs she held at the time), she was invited to audition for B-movie impresario Roger Corman and one of the ace directors in his stable, Jack Hill. They were casting for an upcoming women in prison exploitation film, 1971’s The Big Doll House, to be shot in the Philippines. Corman and Hill recognized the big screen potential in Grier instantly. She was soon hired and became a professional actress earning what was, at the time, a nice weekly paycheck.

Grier starred in four women in prison movies between 1971 and 1973.  Feature films about jailed women were not a new phenomenon in the 1970s. But the sexy, violent, and highly exploitative “babes behind bars” offshoot subgenre was fully launched in the era, and Grier was at the forefront of the movement. A few of the women in prison films in which Grier acted are actual quality goods (in a low-budget kind of way), while others can only be enjoyed on a trashy camp level.

But the one thing that binds these titles is Grier’s on-screen dynamism. Her disarming beauty and provocative sexuality, combined with the edgy fierceness of her acting, made her a celluloid star who was equally alluring and intimidating.  In some of the prison films she portrays inmates and in one she is a matron, and in all of them she is in a near-constant state of being pissed off and ready to put a beat-down on anyone who crosses her. In her 2010 memoir Foxy: My Life in Three Acts, co-written with Andrea Cagan, Grier, who was raped twice in her youth and who experienced plenty of racial discrimination throughout her early life, discusses the angry energy she put into those roles:

I could draw personally from my own anger . . . That kind of raw energy was real for me, and I worked hard to make sure none of it looked fake or manufactured. Jack Hill had told me that I needed to reach into my gut, not my mind, to find the real emotion. I tapped into my intensity.

While the prison films got Grier her start in acting and helped  her to emerge as a rising star, it was her work in Blaxploitation movies that created her status as a big screen legend. Whereas she played one main character among others in the babes behind bars titles, and supporting parts in releases like Hit Man (1972) and Cool Breeze, (1973), in the Blaxploitation films Coffy (1973), Foxy Brown (1974), Sheba, Baby (1975), and Friday Foster (1975), she was the sole star as the title character. Things had reached a point where the movies were more like vehicles created for her, rather than works in which she happened to have a part.

Blaxploitation cinema is a genre that began in the early 1970s, reached its peak in the early-to-middle parts of the decade, and fizzled out by around 1978. It created much controversy at the time. Not everyone in the African-American community saw the positive side of this run of films that were often heavily reliant on violence, sex, and drug usage in the goings-on within urban black communities. People like the leaders of the NAACP and Jesse Jackson saw the movies as lacking meaningful substance while promoting stereotypes of American blacks. But those who enjoyed and celebrated the films did so largely because they were movies that put black people and their real-life predicaments front and center, and allowed black characters to emerge as heroes, even if they were anti-heroes. They also often showed victimized black people getting long overdue revenge on oppressive white characters. They were also simply exciting action films. Grier, a leading light and the biggest female star in the movement, has her own strong opinions about the matter. In Foxy, she reflects back on the importance of her Blaxploitation film roles from a feminist standpoint:

To me, what really stood out in the genre was women of color acting like heroes rather than depicting nannies or maids. We were redefining heroes as schoolteachers, nurses, mothers, and street-smart women who were proud of who they were. They were far more aggressive and progressive than the Hollywood stereotypes . . . My movies featured women claiming the right to fight back, which previously had been out of the question. My roles were written as vanguard personalities who were the first to defend themselves against violence and prejudice.

Grier’s signature Blaxploitation roles, and how she played them, affirm those statements. In these films she portrays characters who work as a nurse, a private investigator, a photojournalist, etc. And in all of the parts she comes across as a self-assured, heroically brave, passionately conscientious woman who takes it upon herself to right the societal wrongs she sees around her, and who doesn’t need or want men to dictate to her.

Not all of the movies in which Pam Grier acted during the 1970s are exactly classic films. While all of them are features the Grier completist will want to view, some are only likely to be appreciated by her most ardent fans and/or cult movie enthusiasts especially interested in babes behind bars and Blaxploitation fare from the era. But the better titles from her acting career through these years are compelling, exhilarating, and groundbreaking.

Four of them come especially recommended: 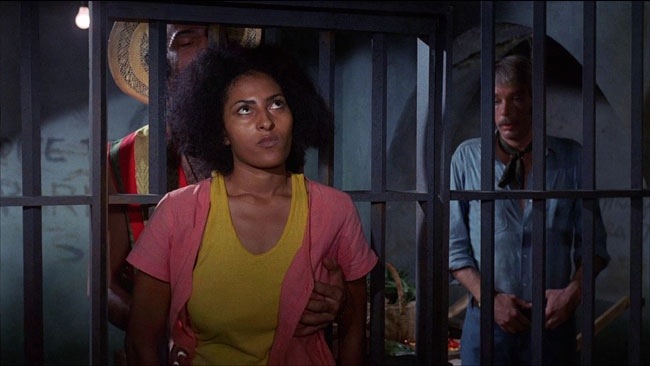 Directed by Jack Hill in the first of many collaborations with Grier, this one checks all the boxes for women in prison exploitation film fare: physically attractive inmates, a sadistic head prison guard, catfights, gratuitous shower scenes, extended torture episodes, lesbian love, jailbreak efforts, etc. Grier is “Grear,” a bisexual inmate doing time for prostitution, who seeks to control the handful of women with whom she shares a cell. Shot in the jungles of the Philippines, what saves this title from being mere throwaway stuff is good acting by Grier and others such as B-movie luminaries Roberta Collins and Sid Haig, Hill’s able directorial work, and some serious plot matters like heroin addiction, political freedom fighters, and the emotional and physical wants and needs of female prisoners. While she plays one of several main characters, in her first major role Grier clearly establishes herself as a commanding on-screen force. And for good measure, she sings the soulful theme song that plays over the opening credits. 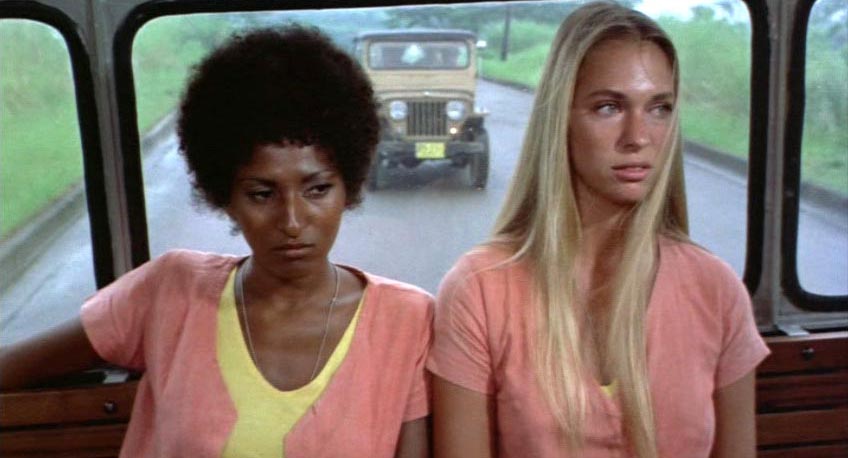 The second best of the babes behind bars features starring Grier. Once again shot in the Philippines, this one was directed by Eddie Romero. Grier is Lee Daniels, a prostitute who gets put in a women’s prison in a banana republic. Daniels and a white female convict (who’s a revolutionary doing time for organized anti-government activities) inadvertently escape from a prison transport vehicle while shackled together at the wrists. So they’re free, but they’re chained to each another, and they have conflicting agendas as to where they want to try and flee. This is a release that no film awards committee needed to study, but it works well as B-level action movie fare best seen at a drive-in theater. Sid Haig is perfect as a greasy bounty hunter, and Grier and Margret Markov (she portrays the revolutionary convict) play well off of each other. As always in her 1970s roles, Grier comes across as authentic as a gorgeous and intense young woman who’s nice to look at yet is nobody’s plaything. 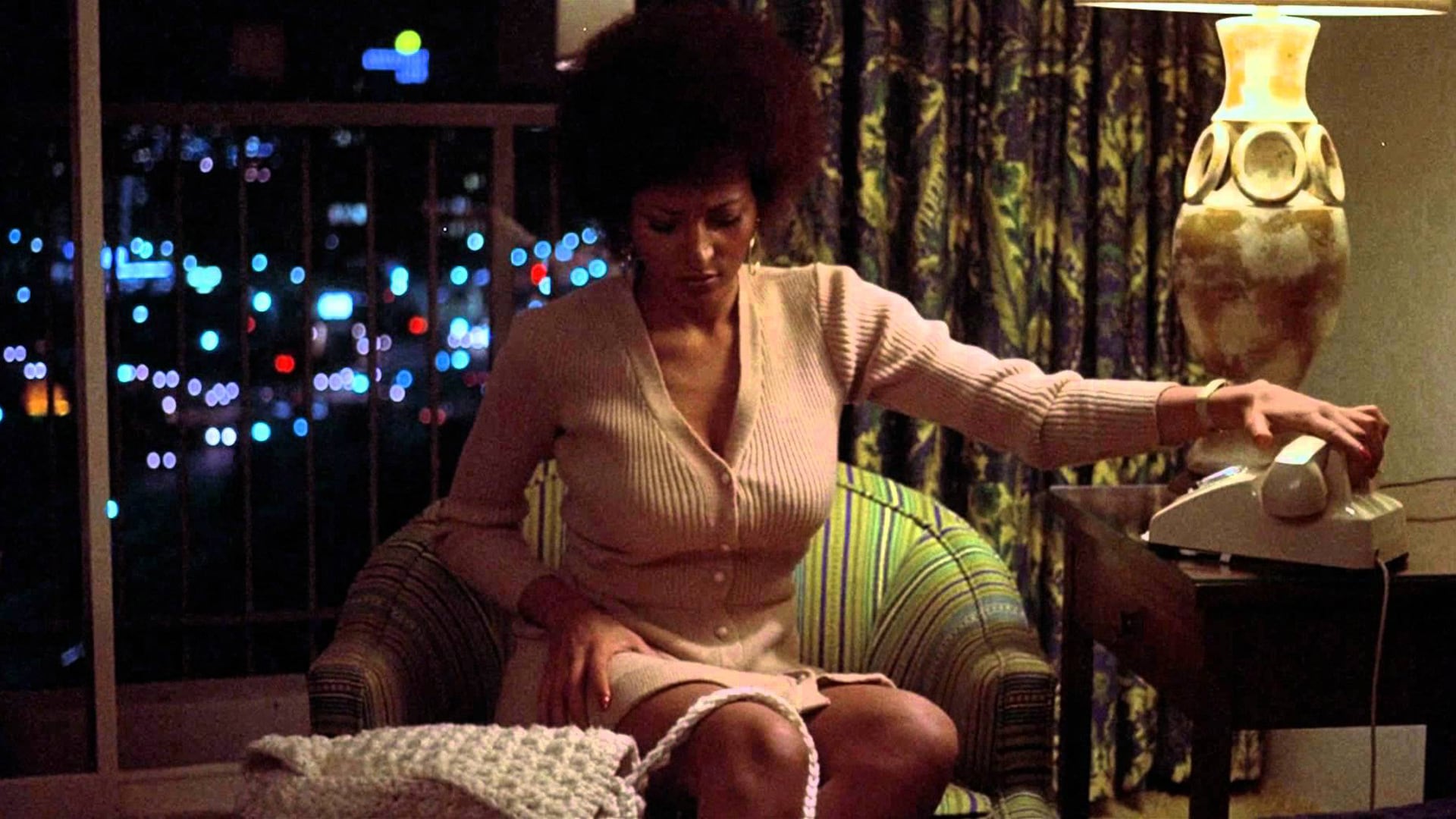 With the Blaxploitation film movement gaining steam despite its critics, the brass at American International Pictures asked director Jack Hill if he could make a “black woman’s revenge picture.” Hill said yes, as long as that woman could be played by Pam Grier. Hill wrote and directed a film that became a massive financial success and that stands today as one of the definitive titles within the genre. Grier embraced her new prominence as the sole main character of a movie in her portrayal of a woman everyone calls “Coffy”: a vigilante out to bring down a big city drug-dealing and prostitution ring. Enraged that members of her family have been ensnared by dependence on hard drugs, the normally conscientious and kindly nurse with the beautiful face and buxom figure becomes a fiery-tempered assassin looking to take the dangerous crime syndicate to its knees. Coffy kicks a lot of asses, including some that belong to white people who have it coming. But the lone wolf revenge seeker is up against it attempting to take on a well-connected and merciless team of mobsters and henchmen. This is the best movie Grier acted in during the decade.

Hill wanted to make a sequel to Coffy, but the heads at A.I.P. forced him to create a distinct new movie with Grier as a similar yet separate character. Once again, she plays a pretty and tough regular citizen who takes it upon herself to go after a city-dominating drug and prostitution syndicate. And this time she has to tangle with her own untrustworthy brother, who’s a pawn in the crime ring’s game, while battling against a slew of creepy and vicious white people. More stylized than Coffy, Foxy Brown is also more outrageous and over-the-top than its predecessor, to the point of being cartoonish. But it’s worth the time if not just for some of the eye candy visual effects like the wild opening credits sequence and some of the far-out 1970s clothing worn by Grier and other actors. There’s also a load of chuckles-inducing classic one-liners and scenes, an abundance of laughingly exaggerated characters, and plenty of groovy funk music. Anyone who wants to understand Pam Grier’s acting career needs to see her in this signature role.

In the first half of the 1970s, Pam Grier was one of the most captivating people working in the film industry. She started as a co-star of a low budget prison movie in 1971, and by the middle of the decade she had become a marquee name for whom films were being created. In a 1975 article in Ms. magazine, writer Jamaica Kincaid called her “one of three bankable movie actresses in Hollywood” (the others were Barbara Streisand and Liza Minnelli). The lasting impact of her screen performances from those years had much to do with why esteemed director Tarantino cast her as the title character in the acclaimed Jackie Brown, which made Grier newly relevant in the movie world of the late 1990s, while paying homage to her work in the 1970s.

It’s currently being reported that Grier has plans to bring her life story to the big screen, via a forthcoming biopic she’ll oversee, tentatively titled Pam. If her cinematic biography plays the way her memoir reads, viewers will be treated to the story of a woman who’s as tough and as admirable as Coffy and Foxy Brown.

Only the Dead Know Brooklyn 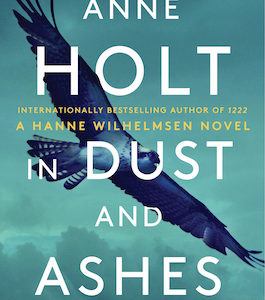