In Praise of Gross Crime Fiction

It’s often been said that art should comfort the disturbed and disturb the comfortable. While this sentiment is most frequently applied to depictions of mental chaos, sexual assault, and the experience of violence, nowhere is it more relevant than in depictions of the grotesque. Americans seem to like their chaos contained, and we frequently participate in the trap of othering, claiming that those who live in conditions of filth have brought it on themselves.

Americans tend to use hygiene and physical perfection in lieu of titles to define class. We demand “good” smells to the point where women poison their vaginas, exploited domestic workers slowly poison themselves with noxious fumes, and the scents produced by New Jersey factories and scattered throughout the grocery aisles are now so ubiquitous that those with chemical sensitivities are forced to spend extra just to not have an allergic reaction. It’s a trope all over the world that you can spot an American by their teeth. I still vividly recall a scene in The Poisonwood Bible when a young girl with a withered leg recently arrived in a remote part of Africa with her missionary family feels at home in her new village when she notes the respect held for a woman with a goiter. The emphasis on artificially induced perfection leads to a bland, beige-ified society filled with the effluence of floating cologne, and surrounded by oceans clogged with our garbage.

In a world with increasing class distinctions, a proletariat service economy, and more housework and childcare than ever for women experiencing the double burden, 21st century society is starting to resemble the Victorian era, when everyone either worked in service or employed service. The upper echelons of society have long condemned large sections of their populations to living in filth, through deliberately restricting access to hygienic resources, failing to ensure sanitary conditions in slums, and in extreme cases herding large amounts of people into crowded areas and watching them die from the rampant spread of disease.

Crime fiction is one of the greatest repositories for the stories of the other half, the down-and-out, and the damned, and with this role in mind, we’ve assembled a list of the most disgusting, filthy, and just plain gross works of crime fiction. It’s time to set aside your inhibitions and revel in a filled-out version of the world, complete with unpleasant sights, sounds and smells.

Ottessa Moshfegh’s debut novel, Eileen, has been lauded for its literary merit, atmospheric setting, and feminist characterizations. My love for this book, however, is based on its extreme ick factor. The titular character lives with her alcoholic aging father in a moldy, cockroach-ridden home, and drives around with vomit in her car for half the book—and that’s just for starters. Moshfegh delights in the rank, the neglected, and the grotesque, as should we all. 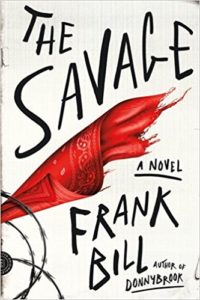 Man, is this book violent. Cannibalized corpses, hunting expeditions, and fights to the death are all described in cheerfully gruesome detail as Frank Bill takes us into a hellscape of a future, wherein militias have destroyed the electrical grids and those who want to survive have either joined Mad-Man-esque gangs or live in small, hidden communities, practicing self-sufficiency. Farmers, hunters, killers, cannibals, and private armies all gather together for one event, the Donnybrook, a brawling bloodbath full of fights to the death. 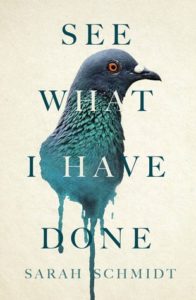 Sara Schmidt, See What I Have Done

While plenty of corpses pop up in Sara Schmidt’s new chronicle of Lizzie Borden, the parts that truly disgust are the historical details – the Borden family and their poor, put-upon maid are constantly eating days-old mutton soup, the description of which is sufficient to turn any readers stomach, but the historically accurate odors are what really got to me. Schmidt’s book is also partly responsible for my stereotype that Aussies write the best/most disgusting historical fiction. 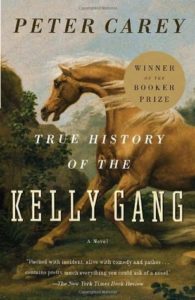 Peter Carey, The True History of the Kelly Gang

Set in all the historically accurate filth and mayhem of life in Australia as experienced by the Kelly Gang, Carey’s novel won the Booker Award and stunned 12-year-old-me when I first picked it up at the library. I included it on this list not because of its undeniable literary merit, but because of its stomach-turning descriptions of 19th century life, including one vivid sequence where a man smokes opium, then elegantly skins a critter. 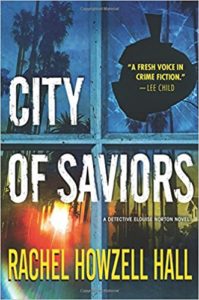 Hall’s third in her Eloise Norton series starts with a sickening depiction of a hoarder’s house, home to millions of live insects, several dead cats, and one recently deceased owner. Eloise and her team must suit up to protect against biohazards several times in the novel, and when cannibalism enters the plot, it doesn’t even compete with the gut-churning descriptions of the dead man’s house. A heat wave for the LA setting accelerates the sense of decay prevalent throughout this book. 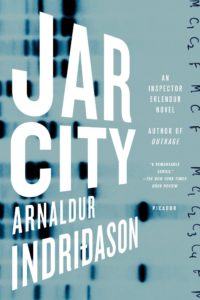 While most of Indridason’s debut takes place in a sanitary modern Iceland, his detective Erlunder does have a fondness for munching on a sheep’s head while brooding. I recommend checking out the film adaptation for a visual sense of this mutinous horror. Those who follow Indridason’s work may recognize this as merely the first instance of unappetizing dinner scenes. 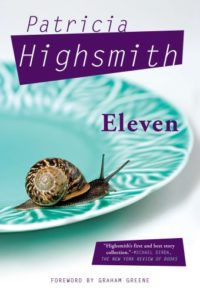 Highsmith loved the creepy crawly critters that the rest of us shy away from, often preferring the company of snails to humans, and while cuddly creatures show up in their fair share of Highsmith stories, her grosser friends in the animal kingdom are the stars of three tales in Eleven. In “The Terrapin,” a preteen already angry at his mother for infantilizing him and smothering him witnesses her cruelty to a turtle she intends to turn into soup—the final straw to push him towards violence. Two other stories in the collection feature Highsmith’s slimy friends; “The Snail-Watcher” has the eponymous character intensely absorbed in the snail reproductive cycle, while “The Quest for ‘Blank Claveringi’” has man-eating giant snails. 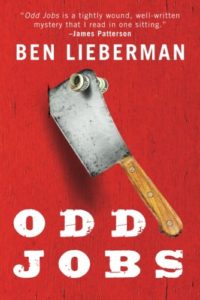 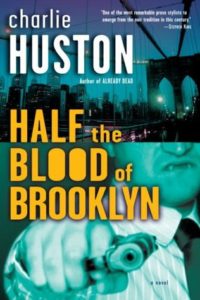 Charlie Huston, Half The Blood In Brooklyn

Charlie Huston’s series featuring Joe Pitt, a New York City PI who also happens to be a vampire, is one the genres most underrated series—five books in length, the series takes us on a tongue-in-cheek journey of New York City and its political allegiances, with vampires split into different factions based loosely on divisions already existent in daylight society, including anarchist vampires, socialist vampires, and feminist vampires (and some evil white supremacist vampires). In the third book of the series, Joe Pitt goes to see a show in Coney Island with vampire geeks eating broken glass and pulling their own intestines out of their stomachs. That scene has scarred me for life. Enjoy! 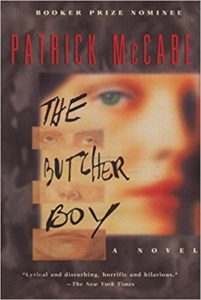 Patrick McCabe, who also wrote the quirky Breakfast on Pluto, first came to my attention through his creepy masterpiece The Butcher Boy. Francie, an unstable Irish teenager with an abusive, alcoholic father and a depressive mother, is already ostracized from his town at the start of the novel. After his family life takes a turn for the worse, Francie escalates from stealing comics and shouting at fish to defecating on his neighbor’s floor, killing a piglet with his bare hands, and dismembering one of the villagers. 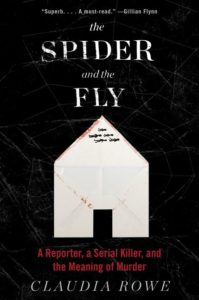 Claudia Rowe, The Spider and the Fly

The first few dozen pages of Rowe’s work of true crime journalism make for some of the most disgusting and disturbing descriptions I have ever read. Rowe profiles a serial killer who managed to stash several bodies in his family home (where he lived with his parents and his sister) without them discovering any. Why wouldn’t they have noticed? Probably because their house, even before the murders, was already one of the worst cases of hoarding imaginable, and in the midst of maggots, mold, stopped up drains, disintegrating newspapers, and further decayed food, a few decaying bodies didn’t make it onto anyone’s radar. 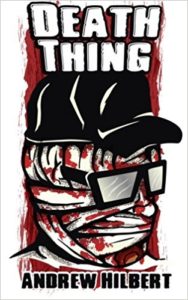 Andrew Hilbert, Death Thing and Bangface and the Glory Hole

If Joe R. Lansdale is the father of splattergore, than Andrew Hilbert is the heir to the throne (and if you want to see what I mean by throne, google Andrew Hilbert Author and look at the image tab). Hilbert’s work is so disgusting, he got a cover article for the Austin Chronicle prefaced “gross-in.” His two novellas—Death Thing, about a man killing people with his car in a suburban wasteland, and Bangface and the Glory Hole, about a beat-up private eye named Bangface and a glory hole that serves as a portal for time travelers, are both highly entertaining crime/horror mashups—and not for the faint of heart. 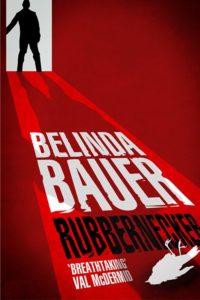 These two both have grisly dissection sequences described from the perspective of psychopathic med students, so we thought we’d pair them for the purposes of this list. In Rubbernecker, a student with Aspergers’ discovers the corpse he’s dissecting died of a different cause than is on record, and sets out to discover the truth. In Perfect Days, a med student leaves his cadaver-girlfriend to go on a tragicomic roadtrip with a woman he kidnaps, torturing her and forcing her to accept his edits on her screenplay, leading to a series of reversals and one of the most twisted endings I’ve ever read in a crime novel. 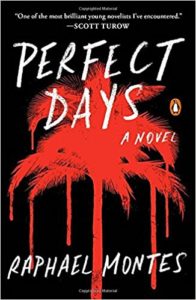 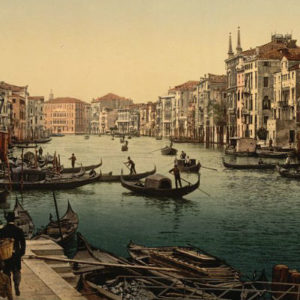 Venice—the City of Water, of Masks, of Bridges, of Canals. A beautiful city without doubt; a unique city. Truman Capote...
© LitHub
Back to top