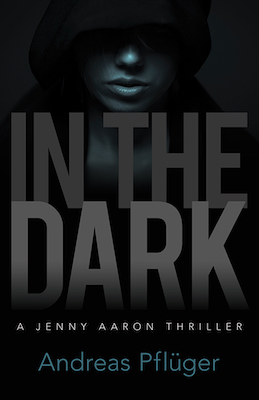 The following is an exclusive excerpt from In the Dark, a Berlin-based procedural by Andreas Pfluger. Jenny Aaron was once the most skilled member of an elite German investigative team, but a failed mission left her blind. Now, five years later, she is summoned to use the insights that have come with her loss of sight to investigate the murder of a prison psychologist.

In the double door system at Tegel Correctional Facility Niko has to hand over his gun. Excessively correct control in spite of their IDs. Papers are meticulously checked. There is whispering.

the rattling of heavy keys

chalk on a board

“What is that?” Aaron knows that the officer who takes her handbag is referring to the telescopic walking stick that isn’t recognizable as a blind person’s cane to the undiscerning eye.

Aaron reaches out his hand. “May I?”

She swiftly extends the stick and hears a murmured, “Sorry.”

As they leave, someone says very quietly, probably too quietly for Niko to hear: “Does she remind you of anyone?”

An officer takes them to the prison Psychology Service. As a case analyst and interrogation specialist, Aaron is involved in large scale areas of investigation at the BKA, organized crime, terrorism, where the victims are only abstract qualities, shadowy entities. Here it’s different. She wants to know who the murdered woman was, to understand what life she was torn from.

The wind drives the snow along ahead of them. Aaron feels the flakes on her wrist, hasty, wet guests which don’t want to stay. She’s been here often, she imagines the broad, apparently deserted grounds, she knows that all the inmates are working now, or locked in their cells. The Psychology Service is based in the school building, to the back near the sports ground. Her thoughts slip into the past, she hears furious men shouting. “Play the ball! Too dumb to wank!”

This time she hasn’t linked arms with Niko, but allows herself to be guided textbook-style, thumb and index finger on his elbow, half a pace back, her hip behind his, but without making contact. Her mobility trainer would be delighted.

But she only does this so as not to be aware of the holster under Niko’s jacket and feel like a dry alcoholic in an off-license.

The murder victim’s colleague has been crying a lot. Her voice is hoarse, dull, empty. “Thirty-three. Her birthday was in December. She invited all her colleagues to go to the cinema.”

“How long had she been working in the correctional facility?”

“Three years. We knew each other from university. Then I started here, for a bit of security. Melly always wanted her own practice. But it didn’t work. She waitressed part-time, it wasn’t a life. When the job here came up I was on at her until she applied.”

Tears start to come, but get stuck in her throat.

“No. She found everything here oppressive. She started losing her spirit. I said: ‘It happens, you’ll get used to it.” The tears work their way up a little further, but still don’t reach her eyes.

“Did she have family?”

“A sister in Norway, who’s coming today. Both her parents are dead”

“She was on her own for a while, because she’d had a few bad experiences. But she’d had a boyfriend recently. Tall, handsome. Melly was really smitten. When she came here in the morning even the wallpaper seemed to brighten”

“Do you have a picture you could show my colleague?”

Her voice quivers. “She was tall, about a meter eighty. She had black curly hair, freckles and skin like porcelain. Melly was beautiful, she was special. In spite of her black hair she seemed temperamentally quite cool. But she wasn’t, in fact”

Aaron feels dizzy. “You look very like her.” “How often did Boenisch come here?”

“Every week. He hardly opened his mouth. She wondered why he came at all.”

“Was she uneasy when she went to see him?”

“Not at all. She was really glad that he invited her to have a cup of—” She breaks off.

The woman reaches for Aaron’s hand. “Thank you.”

“No one from the Homicide Unit has asked about Melly at all. They haven’t even been here.”

On the path leading to Block Six, from which the snow has been cleared, her heels create a rough-grained image. Aaron also clicks her fingers and immediately recognizes the fence that surrounds the building, and even if she didn’t know the place she would be able to tell by the clicks that it wasn’t a wall.

Four or five meters to the entrance. She stops in front of the door just a second before Niko, which must irritate him. A familiar smell inside. Sweat, disinfectant, bad food.

the perfume “Femme” by Rochas

the air in the underground

The Doomed Romances of Noir 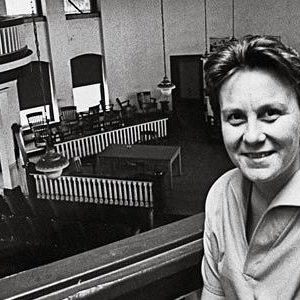 CrimeReads Brief: Week of May 4, 2019 Hindi pulp fiction is on the rise: an interview with the publisher bringing it from railway bookstore mainstay...
© LitHub
Back to top