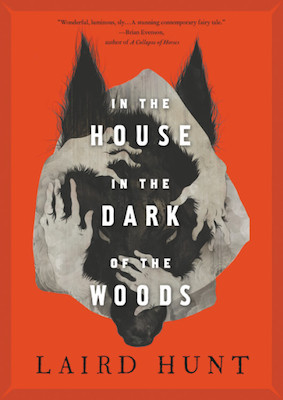 The following is an exclusive excerpt from In The House in the Dark of the Woods, by Laird Hunt. In the following passage, we’re introduced to an unreliable narrator with a distinctive sense of style, immersed in a world of folktale magic and and animal mischief.

After what felt like many minutes of walking, I stopped. I thought of calling out to Captain Jane or the first-folk man or anyone at all but could not make my lips move. Instead, I settled myself with my legs crossed beneath a sweet spire and put down my bundle, which had grown warm with all my traveling. I had been taking my course from the sun and its shadows, but the sun had gone to hide behind the clouds. Thinking of my father and my mother, the weak and the mighty, had soured my mood, so I whistled a little and found a tune I liked. I realized it was one of Eliza’s, from just after my arrival, when she had stood singing quietly in her front room. It was a tune we all of us with ancestors born far away knew in the world of those days, a simple thing as you would have thought, but its words came to me in a jumble. “As I step forth… A garment fair… A dagger bare…Her golden hair…” As I whistled and tried to call up its words, a cheeky little robin redbreast dropped onto the ground some few feet from me and began to hop and dance and chirp so happily I thought he must be some glamour of the woods. He pleased me so much that I opened up my bundle, thinking to break off a piece of biscuit or some bread. But no matter how far I unwrapped my bundle all I found in it was pig, slices thick and thin. Haunch meat and loin. Trotter and tongue. A kingly gift of meat, but a queer idea for a traveler’s lunch.

Up through the woods I went and was happy because I could remember my dark descent of two nights before and knew I must be on the right path.

Still, there was a hungry young bird before me, so I tore off a bit of fried flank and tossed it to him. He pecked it up and chirped for more. That seemed greedy so I called him a greedy guts and told him in jest that if he wanted more, he would have to give me one of his pretty feathers. As quick as you like he pecked hard at his own tail and ripped out one of his feathers with a tug of his neck and dropped it on the ground before me. Amazed, I tore off another piece of meat. Another. The bird ate and ate, then opened his wings and, without any trouble, away he flew. Tearing off the meat had made my mouth water and I put my fingers to my lips and licked at them, but my stomach was still full from my feast with Eliza, so once my fingers were cleaned I closed up my bundle again. The sun was back from its hiding place and I could see my shadow trail. No more whistling. I picked up the robin’s feather, which was edged almost to its dark tip with white and flecks of orangey red, and stood and hurried along after it as best I could. Up through the woods I went and was happy because I could remember my dark descent of two nights before and knew I must be on the right path. “Little robin, little robin,” I called cheerily from time to time, but he never came. A crow took his place. It landed on a branch before me, and I thought, in my happy mood, to follow along after it, as I had earlier the great gang of his blackbird cousins, for it seemed willing to lead, but after flying before me from branch to branch, it dropped down quickly from the heights and startled me greatly by flapping and cawing in the sunlit air in front of my face. It might have kept this up or I might have struck it away, only I looked down and saw the pretty little robin’s feather peeking out from my pocket and said, “Is this what you want? Is it this that caught your beady eye?” I took out the feather, and indeed the crow flapped its wings once more and landed on a moss-covered rock. Slowly, carefully, I held out the feather. Sure enough, the crow reached over quickly with its beak and took the feather and when it began flying again from branch to branch, I started following, and I thought that by granting my request as I had granted his, the little robin had not only offered me cheer but given me the gift of good guidance. I thought this happily for some time as I followed the crow but then, of a sudden, the treacherous thing waggled its wings, looked jauntily down at me, and flew off with the robin’s feather tucked safe in its beak. Still, it was early, and all I did as I watched it fly away was laugh and then, still laughing, I set off once more. Even when the earth began to drop—and I thought it strange for it to do so because this time too I could not remember having done any climbing—I did not concern myself, because we cannot remember everything. Especially not when we have taken a fright and are running. Have left our home and lost our bonnet and berry basket and are flying barefoot through the starlit woods.

My old grandmother, my father’s mother, she of the sweet fingered grip, had gotten turned around in the mists of age one day and had fallen over and not been able to make her way home. Fit as a sweet-strung fiddle one moment, broken and bow-less the next. Before she fell over, she had often taken me out to dig for clams on the shore. She had laughed and talked and pointed to sails on the horizon. She had asked wouldn’t I like to be on one of those boats and a-roving up and down the coast? Wouldn’t I like to fly over the waves and be scoured by wet and wind? The songs she sang were about knots and nets in the country of her birth, and many times on the sand, after she had filled her buckets, she would take me by the hands and dance. After she fell and could not rise and something like sea foam spilled from her lips, she had sat for many a month in our house until my mother grew tired of the mumbling and drooling and one day, when my father was away, tossed her up over her shoulder and carried her off. I do not know where she took her, nor would either of my parents ever tell me. In the years that followed, it took me sometimes to think I saw her walking ahead of me in the distance, with a bright blue shawl on her shoulders and a long clay pipe in her mouth. She looked—for I saw her striding along with purpose—like she had found her path again and was on her way to the water to dig for clams or board a boat. Because on these occasions I had always seen her in the warm of the afternoon, it came to seem like the right time of day to be walking straight and true.

From IN THE HOUSE IN THE DARK OF THE WOODS, by Laird Hunt. Used with the permission of the publisher, Little Brown and Co. Copyright © 2018 by Laird Hunt.

CrimeReads Staff Picks: Our
Favorite Stories of the Month 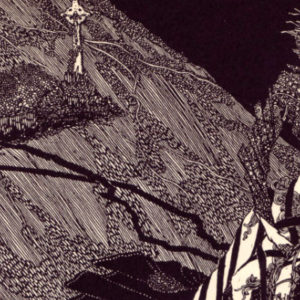 The 25 Most Terrifyingly Beautiful Edgar Allan Poe Illustrations It's hard to imagine an author whose legacy outstrips Edgar Allan Poe's, widely credited as a progenitor for mystery, detective...
© LitHub
Back to top