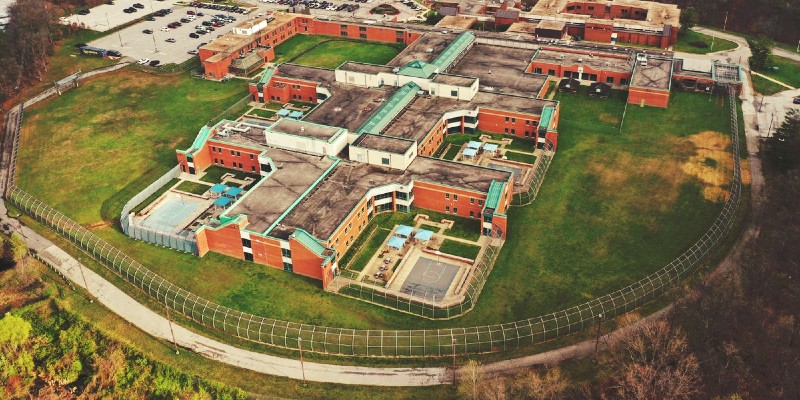 "They’d talk about what ward they were on, their security level, the medication they were taking, and how long they’d been at Perkins, but I never heard a patient ask another patient about their crime."

Named after an influential psychiatrist who helped bring about the desegregation of Maryland’s psychiatric hospitals, the Clifton Perkins Hospital Center—usually known simply as Perkins—has beds for 350 patients and is usually at capacity. Some of the hospital’s patients have committed serious felonies and are being held for competency evaluations, to see if they have the capacity to stand trial, and some are inmates who’ve been sent to Perkins from prisons or other psychiatric facilities in Maryland because their behavior has been violent or aggressive and they meet the criteria for involuntary commitment. Most, however, have been found incompetent to stand trial or have been convicted of a crime committed when they were under the influence of a mental illness. 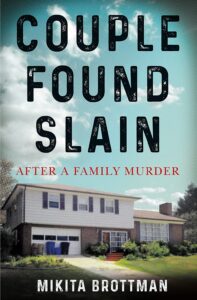 Built in 1959, Perkins is a nondescript redbrick structure set back off a highway on a forty-five-acre tract one mile south of Jessup, halfway between Baltimore and Washington, DC, in a hinterland of freight warehouses, lumberyards, and industrial storage facilities. Like all maximum-security psychiatric hospitals, Perkins was designed so that staff are able to constantly observe all activity everywhere except for in the patients’ rooms, which are built to minimize the risk of suicide by hanging. The threat of escape requires a well-designed perimeter and a limited number of entrance and exit points.

In April 2013, as a volunteer, I began to lead a reading group for patients at Perkins. The group was called Focus on Fiction (invariably misheard as “Addiction”). Designed for patients with a “medium to high” level of functioning and intended to “normalize patient life, help promote a calming atmosphere and reduce boredom and violence,” Focus on Fiction ran every other week from early 2013 until mid-2016.

Focus on Fiction was a nonclinical group, and participation was voluntary. Still, many of the patients were convinced that I had the ability to, as someone put it, “drop a note in our files.” I assured them I did not, but I wasn’t convinced they believed me. When, for example, I suggested that Peter, a smart and imaginative young man, write a short story for us to discuss the following week, he was appalled. “You’ve got to be kidding me,” he said. “If I did something like that, I promise you, it can and will be used against me. You don’t get it. They read into everything here.” Others also admitted to me that they stayed out of the group’s discussions because they were afraid to say things that might get them into trouble, no matter how often I promised them I wasn’t taking notes.

Some of the patients in my group had been college students when their crisis occurred and were obviously intelligent and articulate. At the other end of the spectrum were patients who sat with vacant eyes and slack jaws, never saying a word. I was never sure why these patients kept coming back to the group, but most of them did. Nonetheless, participation was inconsistent; the group changed its members over time. Even the most enthusiastic participants sometimes had to drop out for a while, depending on their work assignments, ward groups, court dates, medications, and other variables.

Every week, I’d hand out photocopies of a short story for the patients to read in preparation for our next meeting, but out of the fifteen or so members of the group, only three or four would do the reading. The rest would either forget, tell me they didn’t have time, or lose the photocopies (not as implausible as it sounds, as I wasn’t allowed to staple the pages together). Ordinary writing instruments weren’t permitted, although we were allowed to use small, flexible ballpoints known as “shorties.” As a result of these and other impediments, we did not, in the end, focus very much on fiction.

Brian was a member of the group from its very first meeting. He struck me as smart, well-spoken, and politely deferential. Although he was friendly, I got the impression that, given the choice, he would have preferred to stay in the background. In his late forties at the time, he was solidly built, with thick brown hair parted down the middle and shaved cleanly above the ears. His eyes were bright blue and engaging; his gaze, level and serious. I was drawn to his enthusiasm, his intelligence, and his sense of humor. I also admired the way he encouraged the participation of other, less confident patients in the group. He was especially kind to Tia, a nineteen-year-old Hispanic woman who’d been brought to Perkins for a competency evaluation.

Tia was a delight. She always did the reading and always had things to say. Chatty and bouncy, she seemed younger than her age, partly because she could be disarmingly open. She talked about struggling with her weight, her looks, and the hospital’s clothing restrictions. (She was particularly indignant when told she couldn’t have her favorite Ugg boots.) Despite all constraints, Tia kept up her appearance; she wore her hair in a different style every time we met, explaining the ingenious method she’d developed of wrapping it in wet paper towels at night, to make it curl.

On the surface, Tia was optimistic, lively, and gregarious, but this was obviously not the whole picture. Her bubbly disposition was real, but it was also clearly a cover for pain. Tia, like many other patients at Perkins, was being evaluated to see if she was fit to stand trial for a terrible crime. In a fit of postpartum depression, she’d taken the life of her newborn son. Eventually the strain began to show. One day, she was accompanied to Focus on Fiction by a nurse, whom she introduced as “my one-on-one,” referring to an arrangement in which a patient is monitored every hour of the day. (I also heard of two-on-ones and even a three-on-one.) In other words, Tia was effectively on suicide watch. Still, her “one-on-one” was no hard-liner. When class began, Tia’s chaperone pulled out a celebrity gossip magazine and a stick of gum, swung back in her seat, and made herself at home.

In one meeting of the group, after we’d been discussing a short story in the form of a fictional memoir, I asked each of the patients to write a memoir of their own. There was a catch: they only had six words. Tia’s was poignant and revealing: “Dream Big: Dancer, Actress, Cosmetologist, Nurse.” A few weeks later, she was found competent to stand trial for murder. She was sentenced to fifty years in prison.

One day after Tia had left, I stayed behind at the end of Focus on Fiction and chatted for a while with Brian. At this point, all I knew about him was his name and his ward. We talked about Tia and how much we both missed her. She’d brought so much energy to the group; it wasn’t the same without her. Brian admitted that he’d had a crush on her. In fact, he said, he was going to ask her if she was interested in being his girlfriend, until he learned she was only nineteen. Brian was forty-eight at the time.

“She was way too young for me,” he concluded, with regret. “She was born in nineteen ninety-four. That’s hard to believe.”

“Where were you in nineteen ninety-four?” I asked him.

“I was here at Perkins,” Brian said. “And closer to being released than I am today.”

What this meant, I realized, was that Brian had been at Perkins for over twenty years. I was surprised, because he seemed so stable, sensible, and intelligent. I wondered what he’d done that had caused him to be kept locked up for over two decades, but I was hesitant to ask. Patients rarely discussed their crimes, even with one another. They’d talk about what ward they were on, their security level, the medication they were taking, and how long they’d been at Perkins, but I never heard a patient ask another patient about their crime. For most, the subject was too perilous to be broached except in the vaguest of terms—nor were their offenses even mentioned in therapy sessions, I gathered, which were focused mostly on current symptoms and medication adjustments. This confused me at first, given that some of the patients at the hospital, even those in my group,  had committed high-profile crimes that had been covered extensively in the local and sometimes national media, and that watching television seemed to be everyone’s main activity. Perhaps the other patients simply hadn’t connected the events described in the media to the newcomers on the ward. This wasn’t impossible; it was often difficult for me to connect the police mug shots I saw online, of mad-eyed, disheveled, dangerous-looking berserkers, with the quiet, polite, good-natured patients in my group.

At first, when I talked to patients in private before or after Focus on Fiction, I’d sometimes ask what brought them to the hospital, but I quickly discovered this wasn’t the best way of finding out. They’d answer in shorthand, in a few brief words that encapsulated their story without particulars: “I had a serious drug problem”; “I had a psychotic break”; “I was suffering from postpartum syndrome”; “My father tried to kill me”; “I went off my meds and got arrested by the cops.”

These summaries, I learned, were a way of warding off further questions. Like Tia’s optimistic six-word memoir, these abridgements were alternate versions of their psychiatric case files (in which they were described as dangerously sick) or the arguments of prosecutors (which depicted them as evil monsters). In the patients’ revised narratives, their once-promising life was interrupted by the onset of a terrible illness. At first, I was taken off guard by these censored and self-justifying accounts, but I later came to understand they were a natural, even a healthy way of looking at things. Don’t we all construct a picture of ourselves, especially of our past behavior, that selects, abstracts, and distorts in order to minimize our failures and foreground our achievements? And once we’ve constructed this image, we have a strong interest in defending it, even if other people don’t see us in quite so favorable a light. In fact, the further our situation from the social consensus on what constitutes “a successful life,” the more pressure we may feel to defend our self-image.

Which makes it all the more unusual that when I asked Brian about his crime, he told the flat, simple truth: “I killed my parents,” he said.

Mikita Brottman, PhD, is an Oxford-educated scholar and psychoanalyst and the author of several previous books, including An Unexplained Death, The Great Grisby, and The Maximum Security Book Club. She is a professor of humanities at the Maryland Institute College of Art in Baltimore 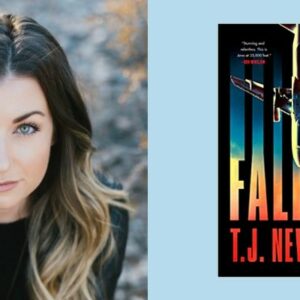 I pulled over onto the shoulder of the road. Dust floated in the beam of the headlights as the car rocked back into park....
© LitHub
Back to top