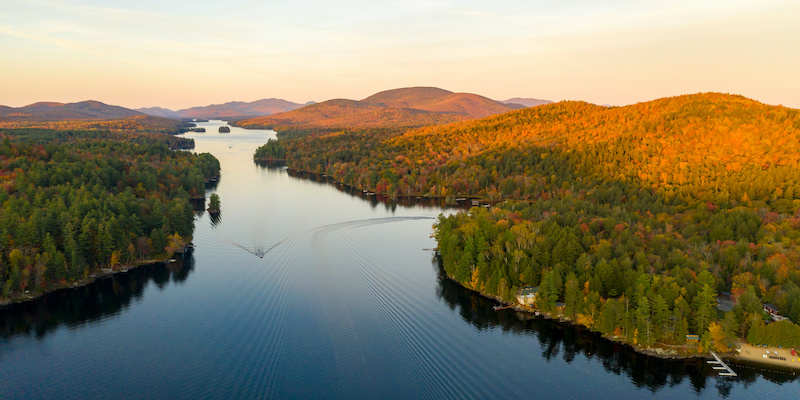 A trip to upstate New York, where Mark Frost once heard stories of an unsolved murder from the early 1900s.

So death, the most terrifying of ills, is nothing to us, since so long

as we exist, death is not with us; but when death comes, then we do not exist.

Welcome to the town of Sand Lake, New York, population 8,425: a beatific, pastoral town nestled in the south-central corner of Rensselaer County, about thirteen miles east of Albany, the state capital. On the town’s outskirts, deep within the woody terrain, lies the neighborhood of Taborton, named after Mount Tabor in Lower Galilee, Israel, which is where, according to the New Testament, the transfiguration of Jesus occurred; he radiated with light and conversed with the great prophets Moses and Elijah.

Taborton Road, the main route in and out, twists and turns for 8.5 miles from the bottom of Taborton Mountain, at the so-called Four Corners of Sand Lake, up past the Kipple (a variation of the German word gipfel, meaning “summit,” about 1,850 feet above sea level), past Big and Little Bowman Ponds, and, finally, on to the eastern tip of the mountain, where you arrive at a crossroads: turn left and you’re bound for East Poestenkill or Berlin; turn right and your destination is Cherry Plain.

It’s a lonely stretch of woods with acres and acres of trees, vegetation, and wildlife—you can walk for miles without ever encountering another person. A lonely stretch of haunted woods, some might say. Folklorist Harold W. Thompson wrote in Body, Boots & Britches: Folktales, Ballads and Speech from Country New York of a Taborton farmer who had encountered a series of curious incidents in his barn: the tail and mane of one of his horses had been inexplicably braided; and the animal was so fatigued that the farmer was convinced someone had taken it out driving all night. Late at night, he checked in on the horse and discovered a strange black cat perched upon its back. Determined to frighten the cat away, he stabbed the feline in the back with a three-tined pitch-fork. The following morning, the farmer’s mother—rumored by many in the woods to be a witch—was so ill that she was unable to rise from bed, but then the horse’s braiding abruptly unraveled, and the animal regained its vigor. Three days later, a doctor, examining the farmer’s mother, discovered three deep wounds in her back.

This sometimes charming, sometimes eerie little town is where Hazel Drew perished, and where our journey began.

Technically, our journey began in 2013 at a retrospective tribute to the television series Twin Peaks at the University of Southern California in Los Angeles. Mark Frost, who cocreated the show with David Lynch, commented that his own inspiration for the series—although not Lynch’s—was an unsolved murder from the early 1900s in Upstate New York, where he and his family would spend summers at the home of his maternal grandmother, Betty Calhoun. Betty would regale Mark and his brother, Scott (who also wrote for Twin Peaks and is the author of the companion book The Autobiography of FBI Agent Dale Cooper: My Life, My Tapes), with stories, many of them embellished—if not outright fabricated—including one about the murder of a young woman in the woods around the turn of the twentieth century that had never been solved. According to Betty, the ghost of the victim, whose body was discovered in a pond, still lingered in the woods, waiting for her slayer to be publicly exposed.

As Mark would later recall: “She would tell us all sorts of fantastic stories about life on the mountain, and one that really caught my ear was when she was a young girl she’d been told a story, something along the lines of a guy who had gone down to a tavern, kind of gotten a toot on, and was walking his way back up the mountain late at night, and he heard what he thought were the moans of a ghost. He saw something white flashing in the moonlight and scuttled home in terror.”

Mark couldn’t be sure, but he believed the woman’s name was Hazel Grey.

We have both long been obsessed with Twin Peaks. One of us (Mark) hosts a podcast about it, titled Deer Meadow Radio (https://deermeadowradio.libsyn.com); the other (David) has authored articles, essays, and books about it. We both also love a good mystery.

We were going to solve the murder of Hazel Grey! Except there was no Hazel Grey. And “Upstate New York” wasn’t much of a clue (or clew, as it was spelled back then).

There was, however, a Hazel Drew, slain in the woods of Taborton on the night of Tuesday, July 7, 1908. Her murderer was never identified or apprehended.

Hazel Drew was killed in Taborton but lived in Troy, about ten and a half miles northwest of Sand Lake. We soon discovered this was really a tale of two cities (technically one town and one city). Six years ago we hardly knew anything about Troy; now we could write a book, except it’s already been done, many times, usually by local historian Don Rittner. Who knew that Uncle Sam was the namesake of Samuel Wilson, a Troy butcher who supplied meat to the troops during the War of 1812? That “’Twas the Night Before Christmas” was first published in the Troy Sentinel, submitted by the daughter of a Trojan rector? President Chester Arthur grew up in Troy; Herman Melville wrote Typee and Omoo there. George Washington Gale Ferris Jr., inventor of the Ferris wheel, graduated from Troy’s Rensselaer Polytechnic Institute.

There are scoundrels and ignominy, too: Mary Alice Fahey (Mame Faye) ran her ridiculously profitable prostitution business on the streets of downtown Troy (with protection from police). Jack “Legs” Diamond was acquitted in the courthouse there, and it was Troy hatter Thomas P. “Boston” Corbett who put a bullet in the head of John Wilkes Booth in a Virginia barn in 1865.

Twin Peaks brought us here, and it is to Twin Peaks that we now return.

Similarities between the Hazel Drew murder and the TV series poked at us, relentlessly. Sand Lake, we found out, has twin peaks of its own: Perigo Hill, in the northeast corner of the town, and Oak Hill, near the center, each rising to an elevation of nine hundred feet. The eastern part of the town, including Taborton, is rich with woods, evoking the anagogic Ghostwood of Twin Peaks. Laura Palmer’s body was discovered on the bank of a lake by lumberjack Pete Martell as he went out fishing early one morning; Hazel’s in a mill pond by two young men on a weekend camping and fishing outing. Back in the day—before the denuding of the forests—lumbering was big business in Sand Lake; the mills, powered first by water and then by steam, employed over two hundred people, enriching their owners, just like Twin Peaks’ Packard Mill. When the mills shut down in Sand Lake and Troy, industry moved on, and those jobs were lost for good, evoking the third season of Twin Peaks.

The deeper we probed, the more striking the similarities between the two women at the center of these stories—Hazel Drew and Laura Palmer—became. Both were beautiful and beguiling young women who inspired male obsession. Laura, as her psychiatrist, Dr. Jacoby, famously said, built fortresses around her secrets; Hazel, too, had secrets, and those around her either failed to penetrate them or went to their graves protecting them. In Laura’s case, clues were everywhere, yet everyone in her orbit ignored them, resulting in her death. Might Hazel, too, have been saved if people had been paying closer attention?

True, Laura came from a wealthy family—her father was a successful attorney employed by the wealthiest man in town—while Hazel was of modest means at best; her father was a rapscallion who loved booze and couldn’t seem to hold a job. But Hazel did leave home at an early age and would go on to interact with some of the most influential, politically wired families in town, exposing her to a lifestyle foreign from her own.

Both Laura and Hazel dreamed of escape and reinvention; in the end, fate determined otherwise.

If Hazel had been a man, or a person of wealth, might her murderer have been apprehended?

Still, Hazel’s murder and the ensuing investigation didn’t lack for attention; rather, it became front-page fodder for newspapers across the country. Why? A working-class girl from a poor family is murdered in a remote section of woods that most people had never even heard of. Something about this story was obsessively compelling, drawing the attention even of famous journalists like Elizabeth Meriwether Gilmer (pen name: Dorothy Dix) and William M. Clemens.

As we continued to investigate, reasons started to suggest themselves. First, there was the political angle. Hazel’s employers were powerful people. District Attorney Jarvis O’Brien was up for reelection.

Rumors of wild sex parties and young women held captive against their will at a camp (or summer home) not far from the scene of her death surfaced. Allegations of secret affairs and possibly even an unwanted pregnancy were tossed around daily in newspaper articles. We started out wondering who killed Hazel Drew; we wound up just as immersed in another, even more rudimentary mystery: Who was Hazel Drew?

Because almost all of the people who controlled the narrative contemporaneously—chiefly investigators and reporters—were men, the story was filtered through the male gaze, and Hazel—like Laura Palmer and her antecedent, the eponymous protagonist of the 1944 Otto Preminger film noir Laura—became a projection on a screen, absorbing whatever qualities or shortcomings these unreliable narrators assigned to her: woman as defined by male obsession. 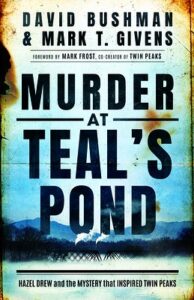 Mark T. Givens works as a consultant for the federal government and is the creator and host of the Twin Peaks-centric podcast Deer Meadow Radio (www.deermeadowradio.libsyn.com). He lives a sometimes strange and wonderful life with his wife and three children in Washington, DC, where he is currently brainstorming concepts for his next book. David Bushman, a longtime TV curator at the Paley Center for Media, is the author of Conversations with Mark Frost: "Twin Peaks," "Hill Street Blues," and the Education of a Writer and coauthor of Twin Peaks FAQ and Buffy the Vampire Slayer FAQ. He is an adjunct professor of communication arts at Ramapo College of New Jersey, as well as a former TV editor at Variety and program director at TV Land. David lives in New York City with his wife and two daughters. 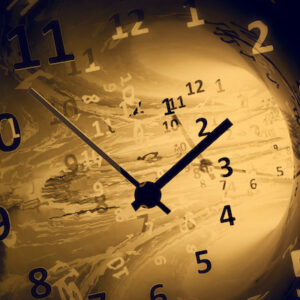 Einstein once wrote: People like us who believe in physics know that the distinction between past, present and future is only...
© LitHub
Back to top