Belfast needs no introduction. You know the story and how everything is divided – The Troubles/The War; Protestants/Catholics; Unionist/Republican; the ballotbox/the Armalite. Of course there’s a lot more to Belfast, but it’s always presented as polar opposites (industrial/post-industrial; regeneration/tradition) and invariably it always goes back to the fighting and the sectarianism. East Belfast is the largely Protestant working-class district, the west mostly Republican and Catholic; the south side of the city is more moneyed and middle class and thinks itself above the ‘other’ Belfast, while north Belfast is where the Protestant and Catholic working class butt up against each other uneasily and where the worst of the last fifty years of shootings, beatings and riots have occurred. There’s no doubt Belfast and Northern Ireland have moved on since the Good Friday Agreement in the late 1990s, but history hangs like a dirty black rain cloud over the city and its crime writing. Lee Child, whose father was from Belfast, has called it “the most noir place on earth.”

Crime writers often take you into worlds that would normally be off limits, and that’s true of much Belfast crime writing. Crossing the divisions of Belfast has long been a risky business. You couldn’t get a better overview of Belfast crime writing than Belfast Noir (2014), edited by Adrian McKinty and Stuart Neville (more on both these writers coming up). They capture the main themes of crime writing about the town in their introduction. McKinty and Neville are keen to focus on the city after the Good Friday Agreement. Belfast these days, to the outsider wandering the city centre, looks like any British provincial city with a High Street and some gentrification around the more heritage-worthy Victorian architecture. The city feels safe now and so new things can spring up. As McKinty and Neville note of the bad old days, “At the time many felt that when the bombers destroyed the Grand Opera House, the ABC Cinema, the Europa Hotel, and other landmarks it was simply because they couldn’t bear the thought of anything good, anything decent, anything shiny to brighten the drudgery of their lives.” 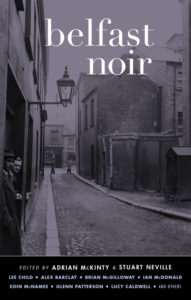 The Troubles have long been a theme in Belfast crime. Bernard MacLaverty’s Cal (1983, with the film of the same name appearing shortly afterwards) explored the myriad ways people could become involved in the sectarian struggles of the city. It’s love and death across the religious divide. Brian Moore’s Lies of Silence (1990) treads a similar path. Moore, who grew up in Catholic Belfast, wrote many thrillers early in his career under many pseudonyms. In terms of the city itself and thriller writing Lies of Silence is by far the best Moore novel for my money.

In McKinty and Neville’s collection (undoubtedly one of the best in the Akashic Books Noir series with not one dud in the book’s 14 short stories, which include contributions from Lee Child and Eoin McNamee among others) the editors are keen to warn the reader away from what they term “Troubles Trash” novels—British and American authors seeking to cash in on Belfast’s infamy but with no real understanding of the city’s internal workings. Here are two impressive novels that are certainly not in that category.

Eoin McNamee is a southern Irish writer whose 1994 novel Resurrection Man tells the gruesome story of the so-called “Shankill Butchers” (named after the city’s Shankill Road, the main thoroughfare running through Protestant west Belfast), an ultra-Loyalist Protestant gang in Belfast thought to be responsible for at least 23 murders. Chris Petit, a very dark and menacing writer, as he proved in his debut novel Robinson (1999) set in London’s pornography industry and his most recent World War Two-set The Butchers of Berlin and Pale Horse Riding, writes about a killer working both sides of the sectarian divide in 1980s Belfast in The Psalm Killer (1997). It’s a noir amid the labyrinthine back alleys and stairways of night-time Belfast. Watching the 2014 movie ’71, written by playwright Gregory Burke and starring Jack O’Connell about a young British soldier separated from his regiment in the Belfast Badlands of the 1970s, I was reminded of the scariness of Petit’s novel. 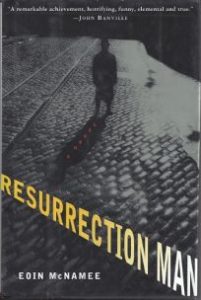 Indeed, Belfast makes it on to the screen regularly. Helen Mirren and John Lynch brought MacLaverty’s Cal to life; and Brad Pitt was perhaps unfairly mocked for his Northern Ireland accent in The Devil’s Own (1997). More recent fare has looked back at the Troubles more seriously: Andrea Riseborough as a mother turned informer on the IRA to British Intelligence’s Clive Owen in Shadow Dancer (2012) and Director Yann Demange’s aforementioned ’71 — seriously not a good year for a British soldier to be wandering around lost in Belfast! As well as many films there is the TV series The Fall written by Alan Cubbitt (starting in 2013 with three seasons), starring Gillian Anderson as Stella Gibson, a London detective working with the Police Service of Northern Ireland (PSNI). The police force has been renamed to remove the taint of the Royal Ulster Constabulary, as the police were called when the force was virtually all-Protestant and generally loathed by Catholics. Thrown in the deep end off the plane from London Gibson reminds her Northern Irish liaison officer, “I’m not interested in your ‘my Jesus is better than your Jesus’ arguments.” The Fall is very contemporary.

Today those writing about Northern Ireland often still tend to look back. The aforementioned Adrian McKinty is currently having a lot of well-deserved success with his Sean Duffy series, winning an Edgar, a Barry Award and a Ned Kelly (from the Crime Writers of America, the editors of Deadly Pleasures magazine and the Crime Writers of Australia, respectively). McKinty, was born in Belfast and grew up in Carrickfergus, County Antrim in Northern Ireland. Sergeant Sean Duffy of the Royal Ulster Constabulary (RUC) is a true original: a Catholic in an overwhelmingly (and considerably sectarian) police force in the 1980s at the height of The Troubles. Duffy drives to work every morning after checking for mercury tilt bombs under his old BMW. He’s got it coming it all ways. The IRA have (and actually did put) a bounty on the heads of any Catholic serving in the RUC; the Protestant Unionist terrorists can’t stand him either, and he’s also got on the wrong side of just about all the non-terrorist but seriously violent everyday criminals in the city too.

The Sean Duffy series starts with The Cold Cold Ground (2012) and now runs through six books to Police at the Station and They Don’t Look Friendly (2017).  Each installment has got decidedly more dark and stylistically noir. McKinty also weaves in various real life characters and events such as John DeLorean’s strange and doomed sports car foray into Ulster, the IRA Brighton hotel bombing that nearly killed Mrs Thatcher, and an imagining of Muhammad Ali coming to Belfast in the midst of The Troubles. With a clutch of awards and eager fans hopefully the Sean Duffy series will continue. But Duffy’s survival chances are not great—Police at the Station and They Don’t Look Friendly is set in 1988, still a decade before the Good Friday Agreement and decommissioning in Northern Ireland. Before it was eventually disbanded in 2001, 319 RUC officers were killed during The Troubles, making the RUC officially the most dangerous police force in the world in which to serve. 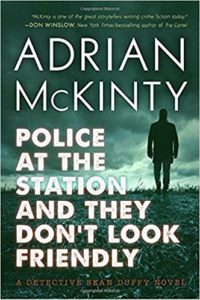 The Troubles may have ended with the Good Friday Agreement in 1998, but not all trouble in Belfast ended then. Sectarian killing is now thankfully rare in Northern Ireland. The North’s murder rate is down to 0.9 per 100,000 inhabitants per year, the same as the rest of the UK and Western Europe. During the Troubles the murder rate had hit 6.5 per 100,000 people, comparable to South Africa or Colombia in their darkest days. Now—and this is a major theme in new Belfast crime writing—it seems the old paramilitaries have turned their hands to more mundane activities, like selling drugs, smuggling petrol and people trafficking. Belfast may be calmer but it’s far from completely reformed.

Several stories in the Belfast Noir collection deal with contemporary crimes that relate back to grudges and arguments from the bad old days. Stuart Neville’s The Twelve/The Ghosts of Belfast (2010) is a highly impressive first novel from the Amagh-born writer. A former republican terrorist is haunted by the ghosts of those he killed and finds himself, in the post-Good Friday Agreement world, seeking out his old comrades to exact retribution on behalf of the dead. The world of The Twelve/The Ghosts of Belfast continues in Neville’s Collusion (2011). Neville is now writing the DCI Serena Flanagan psychological thriller series. 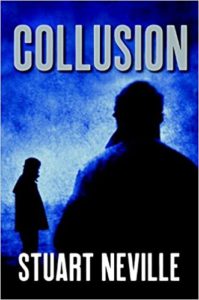 Belfast may be calmer these days but it’s no less tough. It remains a working-class town with staunch and diehard loyalties to a variety of causes. The turbulent 60s, 70s and 80s may be long over, but don’t expect Belfast to lose its edge anytime soon. 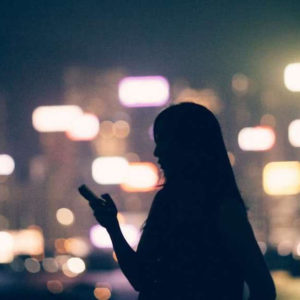 When I arranged to meet Alafair Burke to discuss her new standalone, The Wife, I know we are going to slip into talking about...
© LitHub
Back to top