Alafair Burke on the Unlikely Timing of Her Book, The Wife

When I arranged to meet Alafair Burke to discuss her new standalone, The Wife, I know we are going to slip into talking about the news, as the book could not be more in tune with the zeitgeist. It’s the story of a woman, Angela Powell (the wife of the title), whose high-profile husband is accused of sexual misconduct at work. The accusations really cause a sensation as Powell’s husband, Jason, is on the side of the angels: the author of a bestselling book, a popular podcaster, and a college economics professor who helps investors fund worthy causes worldwide. The accusations rock the Powell family—Angela, Jason, and son Spencer—and place them in the public eye.

Over a midday coffee, Burke, the author of several excellent standalones, and, before that, a series based on a Portland, Oregon D.A., is a little anxious about what people will think of her book and particularly her heroine. “This is one of the first interviews I’ve done about the book,” Burke said, “and it’s still at a point where very few people have read it. My nervousness is that there are all these nuances to it. The book doesn’t work unless there’s a reason for [Angela] to believe her husband over these female accusers.” Slipping into news talk, she adds, “I’m glad we’re having the reckoning, both for justice reasons, but also selfish reasons of my book needing to work. I hope we’re still in a world where we can see that things can be gray. That there can be nuances. That it’s not just once someone’s accused… done, end of story. We don’t probe any further.”

Burke needn’t be so worried: The Wife works just fine. Just as the public conversation about harassment and #MeToo has gotten more complicated, her book raises many of the issues people are interested in. As we discussed the various accusations in the papers, Burke said, “I think we’re already reaching a place where people are starting to talk about it in more nuanced ways. Is it possible that somebody can be redeemed even though they did something bad? Can you love someone even though they’ve done horrible things to other people? And I think that’s what Angela is struggling with when her husband is accused of sexual misconduct. She wants to believe him. But to the extent that she finds out things about him she wishes she didn’t know, she has to wonder, is that forgivable? Can I stay with him? If I don’t stay with him, how does that affect me? Does my life get broken down just because he’s going down? And I think the origins of the story are even before the so-called reckoning we had. If you think about Bill Cosby for example.”

Cosby was an important touchstone for Burke, who said, “I assume most people will realize because of the timing of the book coming out now, I had to have written it before the Harvey Weinstein story kind of broke the wall down.” She also points out that there are other prominent examples of men accused of misconduct, like our current president. “People want to say it traces to Trump. That there was this anger: I can’t believe that guy got away with that and got to be president. And [they] started telling their stories. I think that’s one version of what happened. With any kind of movement you can trace it back and back and back and I think the Cosby case really was important… [He was a] famous beloved man. When he was calling [his accusers] liars and suing them but they were willing to fight back over the course of years, that to me really was groundbreaking. And then I trace it forward from there. But I don’t see this going away. I think this is probably the new normal. Where people just aren’t going to keep it to themselves anymore.” She mused about the relevant scandals of the past: “A lot of women are taking a second and a third and a fourth look at Bill Clinton. I think part of the reason it was hard to look at those accusations against him beyond Monica Lewinsky and in the light we’re looking at them now was that he was such a good champion for values that a lot of women shared. And for Bill Cosby. You know, oh, but he’s Dr. Huxtable. He’s the nice pudding cup guy. I don’t think we want to believe that people with these dark sides present such a good face. With Al Franken, I have friends who had heated debates over whether he should have resigned or not to the point where people are saying even if he did all that, he’s still good for us in the Senate. So I think people get more torn with somebody who is doing good work and we throw them out with the garbage because they’ve done something bad. And does it make us less likely to believe their accusers?”

As more and more women come forward to tell their stories, the men accused of misconduct get put under the public microscope, as do their families. Burke said, “Inevitably and predictably the conversation turns to the wife. And the assumption is she must have known. She’s complicit. She’s covering up for him. She’s made a deal with him. And my instincts run counter to that… even beloved people are somebody else behind closed doors sometimes. And to the extent people have two faces, it makes sense that they’re showing their best fact to their family and to their wife. Her instinct is going to be I never saw that in him.” Despite Angela’s wanting to believe the best about her husband, she also has to consider the evidence against him, and to figure out how (and whether) to keep her family together. Burke asserts, “Angela doesn’t want to become part of the narrative. And I guess the question both in the book, and in what we’re seeing in the headlines now is, you know, is it possible for a man to be put through the system and have his accusations aired without the wife becoming part of the narrative? Because usually there’s no way for her to stay out of the story. She’s part of the story whether she stays or whether she goes.”

Burke wrestled with the question of Angela’s victimhood, just as Angela wrestles with it in The Wife. “One of the things Angela has to struggle with in the book,” Burke continued, “is wondering is even if her husband can get out of the legal trouble, what is her life going to look like? They can’t go out to eat. She takes the knocker off her door because paparazzi are coming by. She has to send her kid away to camp so that he doesn’t know what’s going on. And just, how do you get back to normal? How do you show your face again?” Though Angela learns more and more about her husband and his accusers, her faith in him remains strong, if not constant. Burke said, “Some of the hardest parts in the book to write were as things are revealed to her about her husband she either didn’t know or chose not to know, and she finds a way to blame herself for that. Those chapters, I found almost painful to write. I wanted to jump in the book and say, ‘Girl, wake up.’”

Yet Burke had her reasons to keep Angela, a former caterer who knows little about the legal system, less than aware. “In this book you have a very naive narrator, who knows nothing about the legal system and she has no control over the situation and is trying to find it, and her life’s the one spiraling out of control. And she’s the one finding out new things every day. So that was fun for me to write but a bit of a challenge,” Burke said. She’s a professor of criminal law and a former D.A. (“I think working at a district attorney’s office for several years made me somewhat comfortable going into those gray areas around believing the accuser 100 percent of the time on every single detail?”), so she knows all about the legal implications in these cases. “Some of the legal details become part of the plot. Other than that,” Burke said, “I tried to stay away from a lot of the legal details with the exception of some police reports that the reader actually does read. [And there are] some attorney’s notes. But the book’s written entirely from Angela’s perspective and she knows nothing about the legal system. And she never even knows what to believe what the lawyers are telling her because they’re his lawyers. Not hers.”

It turns out Burke got some help from a friend on the point of how much Angela should know. “I never let people read my books early but I was actually kind of nervous about this one for various reasons and my friend, Michael Koryta, a very talented writer, gives very good feedback. He did read an early draft of it. And had some helpful notes including that Angela seems to know too much for a caterer. He’s like, be dumber, Alafair. Not that caterers are dumb. Be dumber about the legal system. Forget that you’re a law professor. Think like a caterer. I was like, right, she would not understand that. Someone would have to explain to her. And it’s good because then I can slow it down for the reader to understand too without it being a tutorial on the law. It can be her struggling to understand exactly what the situation is.”

Burke said she thought about whether or not she needed to change anything in the book as the #MeToo flood began, “I did go through the book when all this happened to see if I wanted to change anything and I decided there was a certain amount of dishonesty in saying that I didn’t write the book based on #MeToo, and then editing it based on the news. But I think that when people read the book they’re going to see shadows of all the stuff that’s playing out in these conversations now.” She also thinks—rightly—that the current conversation will spur interest in The Wife. “My guess is some people will pick up the book because it’s set in this moment we’re having. My guess is also when they put it down, what they’re really going to want to talk about is Angela. Not these larger issues beyond the book. I think what makes her tick. And why she believes the things she believes and acts the way she acts, is what drives the narrative of the book ultimately. But I do think it will also raise issues, like I imagine at a book club they’re going to want to talk about Angela and then it will turn into a conversation about all of these other stories.” 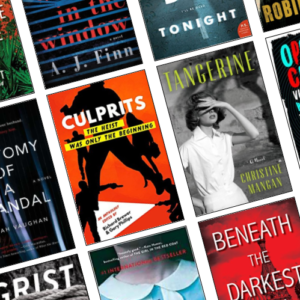