Is the Whodunit Mystery Poised for a Big Screen Renaissance?

With big stars and directors on board, Hollywood is rediscovering the appeal of the murder mystery.

This month saw the first trailer for director Rian Johnson’s (Brick, Looper, Star Wars: The Last Jedi) highly anticipated new film, Knives Out, which is being billed as “an original modern-day American whodunit.” Due out this Thanksgiving, Johnson’s film follows closely on the heels of the massively popular (if Netflix’s number crunching is to be believed) Adam Sandler/Jennifer Anniston vehicle Murder Mystery and sandwiched between Kenneth Branagh’s surprisingly successful Murder On the Orient Express (2017) and forthcoming Death on the Nile (2020) adaptations.

Taken altogether, it seems fair to say that the whodunit film is undergoing a low-key revival. After two—arguably three—decades of conspicuous absence from American cinemas, that moment comes not a moment too soon.

It’s surprising how few and far between these films have been, given that the genre in-and-of itself has retained its popularity—book store shelves are always stocked with the latest mystery page-turners, while podcasts has proven fertile new ground for scribes of suspense, detective fiction, and crime. And all the while, such stories continue to thrive on the small screen.

British television is crowded as ever with murder mysteries both historical and modern, cozy and gritty, pastoral and urban. New iterations and adaptations of the work of Agatha Christie, G.K. Chesterton and Sir Arthur Conan Doyle are never not in high rotation and high demand. Meanwhile, across the pond, we Americans are just as oversaturated with our own versions of the whodunit, usually in the form of the police procedural.

And yet, for as popular as these stories remain on the page and over the airwaves, they’ve all but disappeared from cinemas. It’s true that there’s been a general depletion of films that fall outside sci-fi, fantasy, and horror, and yes, every couple of years a Mystic River or Gone Girl will grab the public’s attention—but by and large, the locked-room whodunit had seemingly been forgotten, with only two major releases since the turn of the century proving an exception prior to 2017: Robert Altman’s Gosford Park (2001) and Quentin Tarantino’s The Hateful Eight (2015).

While Altman’s film—about the murder of a wealthy aristocrat during a upscale hunting holiday in the English countryside—fits snugly within the genre, adhering to its tropes and stereotypes even as it sends them up, The Hateful Eight—which takes place in the years following the Civil War and concerns a group of roughhewn bounty hunters and outlaws trapped together in a waystation cabin during a vicious blizzard—couldn’t seem further removed, at least upon first glance. But, as any mystery fan ought well know, looks can be deceiving, and by the time the film hits its halfway mark it’s as much a classic locked-room mystery—replete with foul play (in this case, an old-fashioned poisoning), a murderer’s row of shady suspects, a brilliant and eccentric detective on the case, and a bevy of shocking last minute revelations—as it is a gruesome, racially charged revisionist Western. Leave it to Tarantino, who cited episodes of Bonanza and The Virginian and the violent spaghetti Westerns of Italian director Sergio Corbucci alongside Agatha Christie as his main influences, to put such a radical spin on the genre.

Unfortunately, The Hateful Eight was one of the rare cases where Tarantino’s singular vision failed to connect with audiences. More’s the pity, since not only is it his most savage and complex film to-date, but if it had succeeded it may well have kicked off a renewed an industry-wide interest in whodunits, not unlike his groundbreaking early ‘90’s output helped do for noir and pulp during that decade.

All the same, the genre would see a renewal of interest within a couple of years, starting with Kenneth Branagh’s Murder on the Orient Express in 2017.

When the English filmmaker announced he was embarking upon a new adaptation of Agatha Christie’s classic 1934 train-set murder mystery, in which he would not only produce and direct, but also star as Hercule Poirot—the brilliant Belgian sleuth at the center of some of Christies most iconic tales—the response was tepid at best. While Branagh has always had his admirers, he had, in the preceding years, appeared to settle into a career as a journeyman director for large-budget corporate tentpoles like Marvel Studio’s Thor and Disney’s live-action Cinderella remake, as well as supporting actor in other people’s movies. Not only did he appear to be well past his prime as a lead actor, but he seemed altogether wrong for the part of the eccentric and corpulent Poirot (indeed, he remains too fit for the role).

Add to that a not particularly inspiring cast (the always welcome presence of old pros Willem Dafoe, Michelle Pfeiffer and Olivia Coleman was offset by the usually grating presence of Josh Gad and the repellent Johnny Depp) and a hilariously bad trailer (when one thinks of Agatha Christie, one no doubt also Imagines Dragons) and all signs pointed to an overly glossy, action-heavy spin on the source material (à la Guy Ritchie’s highly-stylized, but utterly lifeless Sherlock Holmes and King Arthur films), if not an all-out turkey.

It was quite the pleasant surprise then, when he delivered a thoroughly entertaining and refreshingly old-fashioned piece of spectacle. As an adaptation, it remained mostly, though not overly, faithful to the source material, more than holding its own against Sidney Lumet’s well-regarded, but at times stolid 1974 version. Branagh’s film even succeeds in engaging—rather than ignoring—Christie’s treatment of race and class, in ways both obvious (explicitly altering the ethnicity of some characters) and admirably subtle (how many other big budget films would acknowledge the support Joseph Stalin enjoyed among African-American intellectuals during the immediate post-war years at all, let alone in passing and without bothering explaining it to the audience?).

While by no means a masterpiece, Branagh’s Murder on the Orient Express nonetheless proved a welcome addition to the cinematic legacy of Christie and a refreshing change of pace from the standard blockbuster of today. Audiences certainly took to it, enough to get Branagh the greenlight for a follow-up. His adaptation of Christie’s Death on the Nile (1937) is currently in pre-production and set for release sometime next year.

In the meantime, those jonesing for another star-studded whodunit have Rian Johnson’s latest to look forward to. If it matches the hype currently surrounding it, we could be looking at the biggest film of its type in recent memory.

(As mentioned earlier, there is also Netflix’s Murder Mystery, a broad comic spin on the continental whodunit starring Adam Sandler and Jennifer Anniston. However, as was  probably to be expected, it doesn’t do anything of interest with its premise and mostly comes off as another of Sandler’s expensive paid vacations. That said, it’s never unwatchable, which is more than can be said for most of the comedian’s output of the last two decades.)

Although Johnson has become synonymous with Star Wars, coming off the franchise’s most divisive entry to-date, he is, at heart, a director of old-school pulp, one who, like Tarantino or the Coen Brothers before him, never fails to put a refreshingly idiosyncratic spin on tried-and-true templates and archetypes. Any list of the best crime and mystery films since 2000 must include his first three films: the hardboiled high-school private eye film Brick, quirky con-man caper The Brothers Bloom, and violent, dystopian hitman thriller Looper. Given the trajectory of his output thus far, it’s only logical his new film finds him playing in the sandbox (or, in this case, drawing-room) of the classic whodunit.

According to the film’s official synopsis, Knives Out would appear to be just that:

“When renowned crime novelist Harlan Thrombey (Christopher Plummer) is found dead at his estate just after his 85th birthday, the inquisitive and debonair Detective Benoit Blanc (Daniel Craig) is mysteriously enlisted to investigate. From Harlan’s dysfunctional family to his devoted staff, Blanc sifts through a web of red herrings and self-serving lies to uncover the truth behind Harlan’s untimely death.”

Traditional as such a plot sounds, Johnson has given us clues that we may be in for something slightly different. In a series of tweets he posted last January, the director shared posters of the films that inspired Knives Out. Alongside a trio of Christie adaptations from the late ‘70s/early ’80s, the films he cites all boast a distinctly post-modern sensibility: Deathtrap, The Last of Sheila and Gosford Park all meta-murder mysteries centered around the making of films and theater, while Murder by Death, Clue, and The Private Eyes are slapstick farces that consistently break the fourth wall and call attention to the machinations of the genre they’re spoofing.

But for whatever metanarrative trickery Knives Out film may or may not hold in store, and regardless how it turns out quality-wise, it’s just good to know that the above-listed movies continue to serve as influences for today’s filmmakers. Without intending to come off as reactionary or nostalgic, I feel fully justified in proclaiming few films, if any, being made today can match the likes of Deathtrap, Clue, or The Last of Sheila (for my money possibly the most purely entertaining movie ever made) in terms of cleverness or their ability to captivate.

One hopes that Knives Out will carry on this tradition, just as one hopes that Branagh’s Death on the Nile turns out as well, if only so we get more of these type movies. The whodunit loses something when its relegated to the small screen; its formula grows stale and lazy, and it becomes a thing you tune out to, rather than work to keep up with (not that I stand in judgment—lord knows I’ve stayed up into the wee hours of the morning binging Father Brown on Netflix).

Of all the classic genres that have been relegated to the past—the melodrama, the Western, the screwball comedy—the whodunit seems the most well-suited for a comeback in the modern cinematic landscape…

Of all the classic genres that have been relegated to the past—the melodrama, the Western, the screwball comedy—the whodunit seems the most well-suited for a comeback in the modern cinematic landscape, offering as they propulsive narratives, a chance to splurge on eye-popping set decoration and costuming, and the need to star-studded ensembles casts that are once again all-the-rage. There is also a deep catalogue of literature and films that can be updated without it coming off as sacrilege and that haven’t worn out their welcome (if we have to have three different Spider-Mans within a ten-year timeframe, we’re definitely overdue a new Philip Marlow), and which come with the name-brand recognition that studios crave.

They also offer studios a chance to build new franchises and even shared universes. How easy is it to imagine Branagh’s Poirot crossing paths with a new version of Ms. Marple or Tommy and Tuppence. For that matter, and assuming the rights could be worked out, what’s to stop an enterprising studio from going the Marvel route and doing a big Avengers-style crossover featuring a selection of the most iconic sleuths of the whodunit—Christie’s Poirot and Marple, Dashiell Hammett’s Nick and Nora Charles and Sam Spade, a thoroughly (and by necessity) modernized version of Charly Chan—okay, at this point I realize I’m just describing Murder by Death. 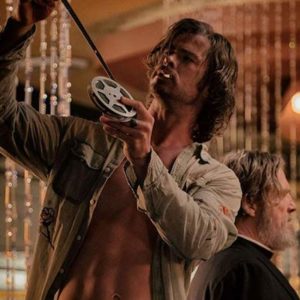 BE ADVISED: SPOILERS WILL FOLLOW For those who are suffering from an overload of Manson content, my deepest apologies. Please...
© LitHub
Back to top