The 1966 film starring Audrey Hepburn and Peter O'Toole is probably the loveliest caper movie ever made.

My first exposure to How to Steal a Million, William Wyler’s 1966 caper film starring Audrey Hepburn and Peter O’Toole, was via anecdote. I was at a party at a professor’s home in September of my senior year at college, chatting with some graduate students when one brought up what she believed to be the sexiest moment in movie history, the scene in How to Steal a Million where Audrey and Peter’s characters meet for the fist time, when he’s stealing a painting from her house in the dead of night and she catches him. He freezes and lowers the frame he’s holding, staring at her the whole time. “When he looks at her over the painting he’s carrying! Those blue eyes!” But this was quickly challenged with another moment: “The broom closet scene! In the museum! When they’re hiding.” Here, everyone nodded. A friend grabbed my arm. “I’d get trapped in a closet with Peter O’Toole,” she volunteered. “Wouldn’t you?” Everyone nodded again.

How to Steal a Million had been streaming on Netflix, and later that night, I decided to see what the graduate students had been on about. One hundred and twenty-three minutes later, I had become How to Steal a Million‘s new votary. Positively evangelical, I dragged three friends to my apartment and sat them in front of my laptop to behold it. They, too, were quickly converted.

It’s not just that we were awed by the palpable sparks between Audrey Hepburn’s disapproving, by-the-book protagonist and the interloper art thief Peter O’Toole. It was the whole thing. Never had a film made me feel quite like this; it was not just the magnetic love story tugging at the sentimentality inside me, it was the whole thing, the whole happy thing. Thus, I open this essay with an anecdote because it’s impossible for me to think of the film without thinking of the first week I heard of it, the first night I saw it, the feeling I had in my heart when I did watch it. Back then, I thought of the end of Giuseppe Tornatore’s Cinema Paradiso, in which our filmmaker protagonist (now older) watches a reel of intimate scenes from old movies that had been censored from their respective features at the theater where he grew up: a montage of passionate embraces, goofy smooches, and longing kisses. He watches them, alone in the theater, spellbound, smiling—and so the film crystalizes its main theme, about falling in love with the movies.

Watching How to Steal a Million, even via my laptop, sitting on my twin-xl dorm room bed, I fell in love, I felt in love. I had always been in love with movies since I was small and started watching 30s screwball comedies with my parents and grandparents, but I was long out of the honeymoon era. My love for movies had become routine, a part of my daily life. How to Steal a Million marked a return to that sensation. I felt transported. I felt fireworks. I felt happy. I was laughing—big giddy laughs and not because anything was so funny or silly, but because I was so delighted, so charmed, and so surprised by it all.

How to Steal a Million is a perfect little caper film set in Paris in the springtime. The film, which is set to a jaunty score by an early-career John Williams, is about a young woman, Nicole Bonnet (Audrey, endlessly decked in Givenchy), who disapproves of her jolly father Charles’s penchant for art forgery. Charles (Hugh Griffith, all eyebrows) is an impeccable imitator of the Great Masters, and makes heaps of money from selling them, but when he loans a priceless statue, “the Cellini Venus,” forged by his own father to the Kléber-Lafayette Museum (played by the Musée Carnavalet) for an exhibition, he finds out that the statue will have to be examined in order for it to be given its mandatory $1 million insurance protection. Knowing that an examination will expose her family’s long history of art crime, Nicole decides that she must steal it back from the museum, somehow. Only, since she has had no interest in a criminal lifestyle until now (spurning her father’s tainted money, she has a full-time job, though we never find out what it is), she needs some assistance in that regard. Making matters worse is that American tycoon and art collector named Davis Leland (Eli Wallach) has become obsessed with acquiring the statue, and will stop at nothing to try to possess it (including wooing Nicole).

Knowing she doesn’t have much time to steal the statue, Nicole turns to Simon Dermott (Peter O’Toole), a suave cat burglar she finds prowling in her family’s Paris mansion, one night. She believes that only he can devise the perfect museum break-in, and while he is less sure, he has already fallen for her and so is determined to try his level best. What unfolds is one of the cleverest heist sequences put to film, a plot so intricate and meticulous and amazing it would be hard to imagine the buttoned-up and anxious Nicole isn’t impressed into having the time of her life.

The graduate students were right about O’Toole’s smoldering entrance, igniting a cat-and-mouse love story that powers the entire film. Nicole is reading in bed while her father attends the museum’s party to celebrate the loan of the Cellini Venus when she hears a sound downstairs. She tiptoes down, in a pink negligee, her hair still in its perfect pageboy tower, and sees a man in a tuxedo manhandling a frame holding her father’s forged Van Gogh. She wrestles an antique pistol off the wall and aims it at him. The camera grabs an extreme close-up of his blue eyes over the wooden painting frame, and then catches his whole face after he slowly lowers the painting.

The camera purposefully captures how striking he looks, how stylish. Lowering the painting gently from his face to his chest, one frame (the wooden one) reveals to another (the camera’s) that he’s wearing a tuxedo. It’s almost a kind of a striptease. There is a fascination, an intriguing element to the discovery of his elegant presentation, an artistry to his own appearance that finds a compliment in Nicole—the object of his gaze while we’re gazing at him. Nicole, whose wardrobe consists of patterned stockings and pastel suits, giant glasses and lace face masks with no eyeholes, is also almost always overdressed, also worthy of framing for how stunning and interesting she looks.

Both Simon and Nicole, from their clothes down to their cars, bring superfluous fashion to their daily activities (including, eventually, activities which will require them to look as inconspicuous as possible). But this film is set in Paris, a city for whom superfluous fashion is bread-and-butter. Although it hardly explores Paris (really, the film’s settings are limited to Nicole’s home, the Hotel Ritz, the Museum, and the streets between them), the world of How to Steal a Million is as picturesque as a city can be, pastel and twinkling in the days and nights of springtime. But Paris doesn’t have to do too much work; the film is mostly composed of interior shots, which leaves Hepburn to be our stand-in for the city’s glamour. Hubert de Givency did all her clothes, and Simon even references the designer when joking about her wardrobe; of all the art in the film, the Parisian Nicole is the only genuine article. While she pursues a statue of a woman (incidentally, her grandmother, who had modeled for it), Simon pursues the flesh-and-blood equivalent.

Perhaps it’s because the film marries this dreamy, elegant, romantic imagery with O’Toole and Hepburn’s undeniable chemistry inside a heist movie plot that I enjoyed it so much when I first saw it and quickly became determined to proselytize on the film’s behalf. I worry about describing Simon’s heist plot at all, because its slow unfolding (another of the film’s pseudo-stripteases) is so beguiling and engrossing. But like the film’s sartorial and visual flair, it is both fastidious and over-the-top, a confluence of flamboyance and conservatism on the level of one of Nicole’s form-fitting lavender suit dresses.

Throughout, How to Steal a Million toys with the balances between flair and conservatism, showiness and concealment, fakery and sincerity, peeling back layers of itself only to reveal, instead of some state of bareness, more intricate artwork underneath. The film is about the constant unfurling, the constant teasing of all its related plots, all its ploys. Just as Simon is only undertaking the museum heist because he is in love with Nicole, it might also reasonably be said that Nicole has devised her request in a specific way that allows her to spend more time with Simon. But amid the film’s omnipresent counterfeiting, Nicole and Simon’s canny machinations and sly crimes are only a means to get at the truth. Which for them is love, and for us is love, too.

Martin Edwards: My Life In Crime 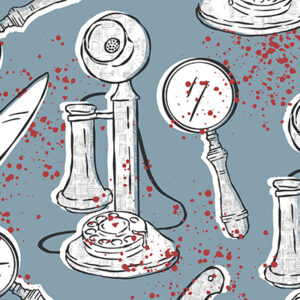 Martin Edwards: My Life In Crime

One sunny weekend twenty-five years ago, during a crime writing conference at St Hilda’s College, Oxford, I chatted with...
© LitHub
Back to top