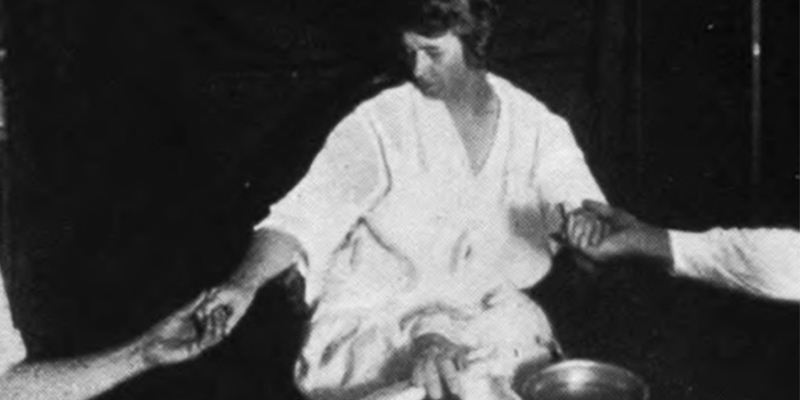 Inside a famous effort by the great magician to discredit a fraudulent spiritualist.

Of the incredible feats Harry Houdini is known for, too few of us know about his *passion project,* debunking fraudulent mediums. Among his psychic rivals, without question, Houdini’s archnemesis was Mina Crandon.

In 1918, Mina married Dr. Leroi Crandon and moved to 10 Lime Street in Boston. Five years later, her husband got into the spiritualism movement and had friends over for a seance. When Mina wasn’t taking it seriously, she was scolded by the group, and soon she was overcome by a spirit that made her move the table. Her husband was amazed (and an idiot) and soon had her regularly working on growing her powers. Soon enough, she was making tables levitate and making objects and spirits materialize in front of his eyes. Mina (going now by Margery) became a massive success, and one of her biggest fans was devout believer in the afterlife, Sir Arthur Conan Doyle.

With this rebirth of spiritualism, Scientific American launched an investigation and was offering $2,500 for a true physical or photographed phenomenon under test conditions. When Margery came to show her talents, one of the people reviewing her was Harry Houdini: (1) a staunch skeptic who, as an illusionist, believed that anything unbelievable is just an act and (2) someone who was out for justice after losing his mother and being taken advantage of by several mediums. As expected, Houdini caught Margery in several tricks during the seance but decided he would not expose her until he had more evidence.

Unfortunately, in his desperation to make her out as a fraud, he was caught contaminating the panel’s tests to catch her in more damning ways, which then made him and Scientific American look bad. So Margery was still being written up as a legitimate medium, and Houdini felt even more threatened as both an illusion artist and someone openly against spiritualists. Since the Scientific American committee wasn’t ready to side with him or call Margery a fraud, Houdini took matters into his own hands.

He published a pamphlet that explained exactly how mediums were performing their tricks (with pictures!) and even began performing the same stunts at his own magic shows. Houdini publicly challenged all mediums: if they wanted him to stop, he would pay them up to $10,000 (or $150,000 today) to perform an act he couldn’t replicate. Margery’s abilities suddenly got more powerful, and before you knew it, she was materializing ectoplasm at almost every one of her seances.

Many skeptics on Houdini’s side started reporting that Margery’s ectoplasm” looked a lot like animal entrails that were stuffed up and coming out of . . . her orifices. (And now the gossip is X-rated? I could not be more invested in this.)

Some of these skeptics in defense of Houdini were Eric Dingwall and Father of Parapsychology, J.B. Rhine. This led Sir Arthur Conan Doyle to defend Margery by taking out spots in local papers that said, J.B. Rhine is an ass.” Although hysterical, this was also the first big rift that divided spiritualists from parapsychologists. Scientific and psychical committees began taking sides and breaking off to form new research organizations that still exist today. In 1928, Mina was officially proven guilty of fraud when a “spirit’s” fingerprint perfectly matched Margery’s.

She is known as the twentieth century’s most controversial medium, and although a fraud, she did once predict during a seance that Houdini will be gone by November. On October 31, a fan went backstage to Houdini’s show, punched him in the stomach, and Houdini died of a ruptured appendix. To this day, some believe it was a planned murder by a spiritualist in defense of Margery’s mediumship. Today you can still see Margery’s home, 10 Lime Street . . . from afar! It is a private property but also right in Boston proper, where you can enjoy several other spooky locations and tourist experiences.

For a crash course in the coolest battle ever, Harry Houdini vs. Psychics, go listen to And That’s Why We Drink Episode 155.

For the much longer spiel on Houdini vs. Margery Crandon, listen to And That’s Why We Drink Episode 156: The Chairman of the Haunted House Committee and Too Many Walters. 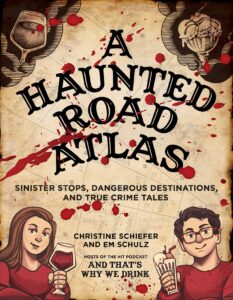 Christine Schiefer (she/her) and Em Schulz (they/them) are the hosts of paranormal and true crime podcast And That's Why We Drink. Every Sunday, they dig into a new set of spooky ghost stories and true crime tales. After all, they're just here for the boos! With over 100 million lifetime downloads, And That's Why We Drink is consistently featured in the top 20 on the comedy podcast charts, and winner of the 2019 and 2021 "People's Voice" Webby Award for Best Comedy Podcast. Their new book, A Haunted Road Atlas, is now available. 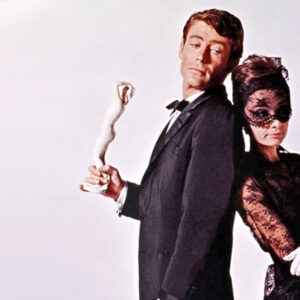 My first exposure to How to Steal a Million, William Wyler's 1966 caper film starring Audrey Hepburn and Peter O’Toole,...
© LitHub
Back to top