It's Time for Women to Take Over Spy Fiction

Guns, Ego, and Being Told a Genre Is Off Limits

A few years ago I went to Academi, formerly known as Blackwater, the military training center in Moyock, North Carolina. I’d spent the night before in Virginia Beach then driven out early with friends who had been there before and, a little like people who love repeat trips to Disney World, they acted like kids en route to a very large candy store. “There’s nothing there,” they assured me, which was a compliment; “it’s just guns and sandwiches,” they said, which sounded strange and also so apart from the place we’d just left, Manhattan. We all had small children, maybe we were escaping something more than just the city.

When you arrive, there’s a little sign and then nothing but fields, four thousand acres which I would learn included fifty-four tactical shooting ranges, two airfields and an elaborate defensive driving course I would try, and fail, to avoid. You pass through security then enter an entirely unremarkable compound of low, metal structures, some for sleeping, others for housing. There’s a cafeteria. And a shop that sells hats and shirts. Special Forces teams from all over the world travel there to train. Apparently, you hear a lot of languages being spoken. Or, on the range, being shouted.

I was there to participate in a two-day shooting course, primarily with Glock pistols but also with some semi-automatics, if I wanted. I was there because I was researching a novel about a boy who becomes a special operator. I thought it was wise to learn a few things first. Like, how to load an automatic weapon, something I wouldn’t have otherwise had any idea about. I had gone dove shooting, but a rifle is very different from an M4. “Anyone who thinks the pen is mightier than the sword has obviously never encountered an automatic weapon,” said Douglas MacArthur. Later, a friend who is an artist painted that quote on a silk dress I often wore when I had to wear a dress, which is rarely. People would ask about the quote and I would tell them about my instructor, at Moyock, who loved to read. He wouldn’t have agreed with MacArthur.

Before we were allowed out on the range we had to sit in a classroom and hear a lecture about safety, which is to say a lecture about danger, and risk. The instructor then told us he was going to place our pistols on our desks. He cautioned that some people “get anxious” when they actually see the weapons up close, “it’s not like in the movies,” he said. He said nerves are perfectly normal but that we should “aim, no pun intended” to let go of anxiety before we leave the room. He stressed the critical importance of mindfulness once we were outside. I thought this was all a little silly. I told myself I wouldn’t be bothered at all to have a pistol on my desk. I was wrong.

When the instructor placed the guns on my desk he said, “don’t worry, by the end of the day you will be the best shot, women always end the first day ahead, women learn quick.” Later, he explained that this is true not because women are more skilled but because women listen.

When I decided to try and write about espionage someone who actually worked in espionage told me, “Lea, women don’t write in that genre.” He said, “women can write crime, but not espionage.” I found it kind of fascinating that that was apparently accepted, conventional wisdom. Maybe it was true, what did I know, I’d seen the Bond movies but was by no means an expert. I hadn’t thought a lot about it. It is true that women don’t often to write books on special operations, though there have always been exceptions, and always have been brilliant female war correspondents. My father served in the military and after he died I tried to read more books in that genre and saw my shelves fill up with books by men, about men, largely for men. That only made me think maybe I could do it differently.

When I decided to try and write about espionage someone who actually worked in espionage told me, “Lea, women don’t write in that genre.” He said, “women can write crime, but not espionage.”

The idea that any literary genre is walled off to women seemed absurd, but perhaps what my friend was saying was less an example of sexism and more a simple statement on taste. As economists might put it, maybe espionage in ways has been a primarily male genre due not to supply but rather due to demand. Maybe women haven’t been demanding espionage in the way they demand other things. I decided to see what would happen if I gave it a try. I talked to people. I listened. I don’t know if I broke any rules because I never really knew what the rules were.

I tried to write a book which coupled my own pre-conceived ideas about spy novels (plot matters, pace matters, tradecraft’s cool) with the kind of book I wanted to read, which would turn out to be a lot less about dead drops in Sanaa or surveillance detection routes in Damascus and a lot more about relationships, people, emotion. red white blue is about spies but it’s also about losing a parent, it’s about the “ultimate risk,” falling in love. When I delivered an early draft to my editor, one which included incredibly Byzantine details about training at the Farm, her response was, “this is boring.” She was right. The finest espionage writers, take le Carré to start, possess deep knowledge of their subject matter but are telling stories, in the end, about people. Not tactics. I threw out around eighty percent of that first draft. As I wrote the second draft I thought a lot about Michael Herr’s Dispatches, a book I only finally read just before that trip to Moyock. Herr talks about how the best war stories usually end after the line introducing the climax, the line that’s always something like, “he went up the mountain.” But then what happens? The best war stories are ones where the action is left to the reader’s imagination. Of course.

At the end of that shooting course the instructor took me out on the range for one last session. It was evening. He again mentioned that women learn certain things faster than men do. He said it was actually less a question of listening than the fact that women “have no ego.” I think he meant women tend to have lower expectations of ourselves when taking on something traditionally male. Like hitting a moving target while having to re-load. Which it turns out is really hard. Or, like writing espionage, also extremely hard. A level of difficulty affords a level of humility which, in my experience, was an advantage. I had no idea about what I was trying to do and, unlike learning how to shoot a gun in order to write about it, becoming a spy wasn’t an option. I only tried to imagine what it might be to live that life, make those choices, experience the different kind of violence one endures in that line of work.

Lea Carpenter is the author of Red, White, Blue and Eleven Days. Carpenter is a Contributing Editor at Esquire and wrote the screenplay for Mile 22, a film about CIA’s Special Activities Division, directed by Peter Berg and starring Mark Wahlberg and John Malkovich. She is developing Eleven Days for television with Lucy Donnelly (Grey Gardens) and Gideon Raff (Homeland). She lives in New York. 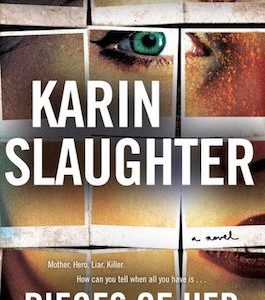 “Andrea.” Andy stared at her mother’s mouth, wondering if she was hearing the word or reading the word on her lips—so...
© LitHub
Back to top