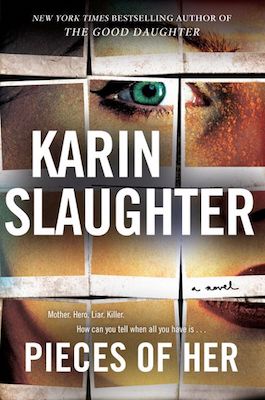 The following is an exclusive excerpt from Pieces of Her, by internationally bestselling thriller writer Karin Slaughter. In the following passage, a disoriented woman tries to make sense of her mother’s actions after her mother stops a spree killer.

Andy stared at her mother’s mouth, wondering if she was hearing the word or reading the word on her lips—so familiar that her brain processed it as heard rather than seen.

That had come through, a muffled request like her mother was speaking through a long tube.

“Andy,” Laura had grabbed both of Andy’s hands in her own. Her mother was bent over in the chair, obviously in pain. Andy had knelt down. She’d started knotting the tablecloth.

That’s what Andy would have said to a panicked caller on the dispatch line: Don’t worry about hurting her. Tie the cloth as tight as you can to stop the bleeding.

It was different when your hands were the ones tying the cloth. Different when the pain you saw was registered on your own mother’s face.

“Andy.” Laura had waited for her to look up.

Andy’s eyes had trouble focusing. She wanted to pay attention.

She needed to pay attention.

Her mother had grabbed Andy by the chin, given her a hard shake to knock her out of her stupor.

She had said, “Don’t talk to the police. Don’t sign a statement. Tell them you can’t remember anything.”

“Promise me,” Laura had insisted. “Don’t talk to the police.” Four hours later, Andy still hadn’t talked to the police, but that was more because the police had not talked to her. Not at the diner, not in the ambulance and not now.

Andy was waiting outside the closed doors to the  surgical suite while the doctors operated on Laura. She was slumped in a hard plastic chair. She had refused to lie down, refused to take the nurse up on the offer of a bed, because nothing was wrong with her. Laura needed the help. And Shelly. And Shelly’s mother, whose name Andy could not now remember.

Who was Mrs. Barnard, really, if not a mother to her child? Andy sat back in the chair. She had to turn a certain way to keep the bruise on her head from throbbing. The plate glass window  overlooking  the  boardwalk. Andy  remembered  her mother tackling her to the ground. The pounding at the back of her head as her skull cracked against the window. The spider-webbing glass. The way Laura quickly scrambled to stand. The way she had looked and sounded so calm.

Andy rubbed her face with her hands. She did not look at the clock, because looking up at the clock every time she wanted to would make the hours stretch out interminably. She ran her tongue along her fillings. The metal ones  had  been  drilled  out and replaced with composite, but she could still remember how The Sound had made them almost vibrate inside her molars. Into her jaw. Up into her skull. A vise-like noise that made her brain feel as if it was going to implode.

Laura holding up her hand.

The long blade slicing into her palm. Wrenching the knife away.

Backhanding the blade into the man’s neck. Blood.

Jonah Helsinger. That was the murderer’s name. Andy knew it—she wasn’t sure how. Was it on the dispatch radio when she rode in the ambulance with her mother? Was it on the news blaring from the TV when Andy was led into the triage waiting room? Was it on the nurses’ lips as they led her up to the surgical wing?

“Ma’am?” A Savannah police officer was standing in front of Andy.

“I don’t—” Andy tried to recall what her mother had told her to say. “I can’t remember.”

“Ma’am,” the officer repeated, which was weird because she was older than Andy. “I’m sorry to bother you, but there’s a man.  He says he’s your father, but—”

Andy looked up the hall.

Gordon was standing by the elevators.

She was up and running before she could think about it. Gordon met her halfway, grabbing her in a bear hug, holding her so close that she could feel his heart pounding in his chest. She pressed her face into his starched white shirt. He had been at work, dressed in his usual three-piece suit. His reading glasses were still on top of his head.  His Montblanc pen was tucked into his shirt pocket. The metal was cold against the tip of her ear.

Andy had been losing her shit in little pieces since the shooting began, but in her father’s arms, finally safe, she completely lost it.

Andy had been losing her shit in little pieces since the shooting began, but in her father’s arms, finally safe, she completely lost it. She started to cry so hard that she couldn’t support her own weight. Gordon half lifted, half dragged her to a set of chairs against the wall. He held onto her so tightly that she had to take shallow breaths to breathe.

“Daddy,” she said, the word coming out around a sob.

Andy sniffed back her tears. She tried to regain her composure. And tried. Every time she thought she might be all right, she remembered another detail—the sound of the first gunshot, like a jar popping open, the thwack as her mother lodged the knife into flesh and bone—and the tears started to fall again.

Andy wiped her nose. She took a shaky breath. Gordon leaned up in the chair, still holding onto her, and pulled out his handkerchief.

Andy blotted away her tears, blew her nose. “I’m sorry.”

“You have nothing to apologize for.” Gordon pushed her hair back out of her eyes. “Were you hurt?”

She shook her head. Blew her nose again until her ears popped. The Sound was gone.

Why was he telling her what to say? Had he talked to Laura? Was her mother in trouble?

“All right?” Gordon asked. His hand was warm against her back. She felt anchored again. “You okay?”

Andy opened her eyes. Her nerves still felt raw, but she had to tell her father what had happened. “Mom—she had a knife, and this guy, she mur—”

“Shhh,” he hushed, pressing his fingers to her lips. “Mom’s okay. We’re all okay.”

He put his finger back to her lips to keep her quiet. “I talked to the doctor. Mom’s in recovery. Her hand is going to be fine. Her leg is fine. It’s all fine.” He raised an eyebrow, tilted his head slightly to the right where the cop was standing. The woman was on the phone, but she was clearly listening.

Gordon asked Andy, “You sure you’re okay? Did they check you out?”

“You’re just tired, baby. You were up all night working. You saw something horrible happen. Your life was in danger. Your mother’s life was in danger. It’s understandable you’re in shock. You need some rest, give your memories some time to piece themselves together.” His tone was measured. Andy realized that Gordon was coaching her. “All right?”

She nodded because he was nodding. Why was he telling her what to say? Had he talked to Laura? Was her mother in trouble?

She had killed a man. Of course she was in trouble.

The Rise and Spectacular Fall of Midcentury Crime Comics

It's Time for Women to Take Over Spy Fiction 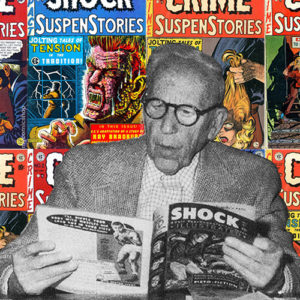 The Rise and Spectacular Fall of Midcentury Crime Comics No medium has ever kicked sand over the line between crime and horror as gleefully—and with such spectacular fallout—as...
© LitHub
Back to top