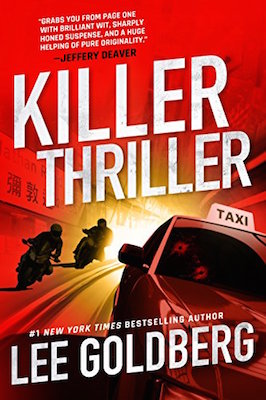 The following is an exclusive excerpt from Killer Thriller, the sequel to Lee Goldberg’s True Fiction, featuring Ian Ludlow, the unlucky writer whose schemes keep turning into reality. Here, he and his assistant, Margo, ward off attackers on the streets of Hong Kong.

Ian and Margo left the bird garden and headed down Tung Choi Street, known locally as Goldfish Street. Both sides of the street were lined with storefronts that overflowed onto the sidewalks. Hundreds of baggies filled with water and live goldfish hung from cork-boards at the doorway of each store. There were also buckets of colored gravel, buckets of coral, and shelves spilling over with plastic galleons, treasure chests, anchors, and other knickknacks for decorating aquariums.

“The Chinese believe that having an aquarium is good fengshui. It brings wealth and luck.”

“This would be the perfect place for a Straker fight scene.”

“Maybe if this was Chainsaw Street or the knife market,” Margo said. “But there’s nothing dangerous about a baggie full of goldfish.”

“That’s why it works. Readers love it when Straker turns a harmless object into a deadly weapon. That said, is there a Chainsaw Street or a knife market?”

“Not that I know of, but you could create them.”

“I prefer my fiction to be based in reality.”

She rolled her eyes. “Is that so? In one of your books, you had Straker give a woman an orgasm so intense that she went into a coma for three days.”

Ian and Margo were so busy talking that neither one of them noticed the two men walking toward them, not that there was anything suspicious about them besides their laser focus on Ian. One man had a pockmarked face from a youth spent picking at his acne. The other man had a once-broken nose that looked like it was trying to climb over his left cheek.

“You love using that scene as an example whenever you talk about a Straker book,” Ian said. “You must have really liked it.”

“It was memorably awful.”

“That’s not it,” Ian said, a chiding tone in his voice. “The truth is, it turned you on. That’s why you remember it.”

“Because I looked it up,” she said. “I couldn’t find it anywhere.”

“You were so aroused by what I wrote, and so eager to learn how to experience Seiteki chōetsu for yourself, that you rushed out to find everything you could about it. But you won’t find anything on Google or in any library. It’s a technique that’s taught only through experience. You have to find a Seiteki chōetsu sensei to teach you.”

“And I suppose that’s you.”

That’s when the pock-faced man charged forward, grabbing Ian’s messenger bag from his shoulder and knocking him off his feet.

Ian was still on his back, shocked by the mugging and even more so by Margo’s physical prowess, when a third man charged out of nowhere, wielding a knife.

Ian stood up, grabbed Margo by the arm, and pulled her into the street. “Run!”

They rushed down the street, leaving the three men and Ian’s messenger bag behind. They dashed into an alley and onto another street market teeming with people browsing through piles of new athletic shoes. Ian didn’t stop running until he was sure that nobody was chasing them.

He stopped to catch his breath at a stall selling bootleg Air Jordans and looked at Margo. “What the hell was that?”

“Don’t exaggerate. What you saw was pure desperation.”

“It was more than that,” Ian said.

“I took a few self-defense classes after everything that happened to us. I thought it would make my fear go away,” Margo said. “It didn’t.”

“No, just the Straker script and the bird souvenirs. Certainly nothing worth dying for. I’ll buy another bag here,” Ian said. “But I was right.”

“Goldfish Street is a great place for a fight scene.”

From KILLER THRILLER. Used with the permission of the publisher, Thomas & Mercer. Copyright © 2019 by Lee Goldberg.

The Wolf and the Watchman 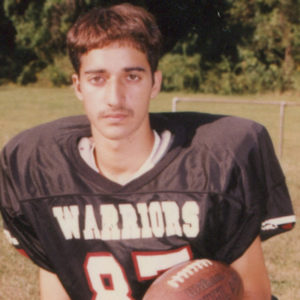 Catching Up on the Case Against Adnan Syed In 1999, the body of Hae Min Lee, a high school senior, was found in a park in Baltimore, killed by manual strangulation....
© LitHub
Back to top