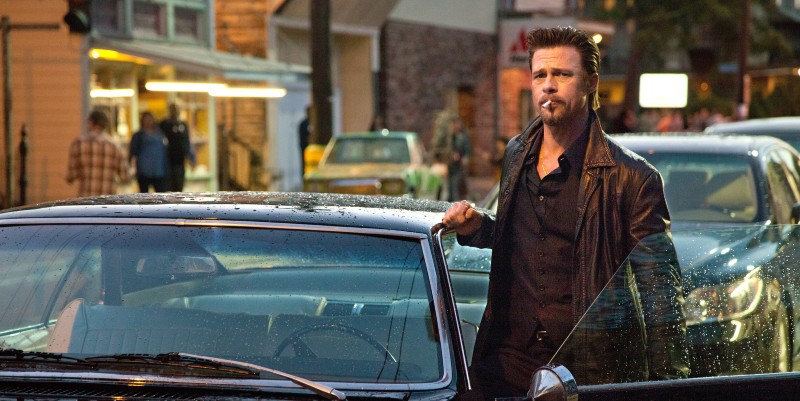 The 2012 film adapted the George V. Higgins classic and predicted the country's bleak road ahead.

The first word spoken in Killing Them Softly is “America…”, as intoned by none other than Barack Obama and preceded by a discordant, dread-inducing drone.

The first image we see is a box of light at the end of a long, dark tunnel. Within the light rages a whirlwind of garbage. Then the screen cuts quickly to black, before the first title card appears, reading: An Inferno Presentation.

Although such an aggressively unsettling introduction is more reminiscent of a horror movie than your standard gangster picture, it is entirely fitting for the film we are about to watch, a beguiling and existentially terrifying descent into the American inferno that comes on with all the subtlety of a sawn-off shotgun blast to the face.

The 2012 film, directed by Andrew Dominik, charts the violent intersection between a number of desperate and dangerous criminals operating within a nameless urban city in the early days of The Great Recession. Two ex-con heroin addicts (Scoot McNairy, doing his best Casey Affleck impersonation, and a gloriously repulsive Ben Mendelsohn) hold up a mob-protected card game in the hopes that the blame will fall on its operator, Markie Trappman (Ray Liotta), who is known to have staged a similar robbery a few years back. Their entire underground card operation shut down out of precaution, the mob brings in Jackie Cogan (Brad Pitt)—a fixer, hitman and underworld detective all rolled into one—to sort things out and punish the guilty.

Featuring some career best work from Pitt, McNairy, Mendelsohn and Liotta, as well as Richard Jenkins as the mob’s sad sack messenger and James Gandolfini as a hitman in the throes of a severe midlife crisis, the story is almost shockingly straightforward in its telling—a stranger comes to town to do a job and does it, dealing with a few hiccups along the way, but no real surprises. But as in the original novel, plot takes a backseat to character and setting, both of which are rendered through long scenes of argot-heavy, exposition-free dialog. There are a handful of violent set-pieces (most notably a long, drawn out pummeling that is legitimately hard to watch, and a slow-motion assassination/car-wreck that is impossible to look away from), but mostly, this is a picture in which a lot of men sit around and do a lot of talking.

As such, you’d assume it would skimp on visuals, but you’d be wrong—Killing Them Softly finds its director, Dominik, working in full-fledged visionary mode. While he’s clearly taking cues from the mob dramas of Martin Scorsese, his picture has more in common with the cosmic scope and menacing rhythms of Stanley Kubrick (see again that opening, which recalls no other film so much as it does The Shining).

Dominik isn’t entirely successful in his efforts, as many of his standout flourishes come off as unnecessarily showy, while some scenes simply drag on too long. But despite its flaws, the film remains entirely beguiling, as well as deeply rewarding upon repeat viewings.

Released in November of 2012, Killing Them Softly marked the third straight crime film from the Australian Dominik, who burst onto the international scene at the start of the millennium with his ferocious debut, Chopper, a gritty black comic biopic about his country’s most infamous career criminal, Mark “Chopper” Read. He followed that 7 years later with The Assassination of Jesse James by the Coward Robert Ford, a beautifully elegiac adaptation of Ron Hansen’s fictionalized telling of the betrayal and murder of the legendary western outlaw and folk hero. Five years after that film’s disappointing reception, Dominick re-teamed with star and producer Brad Pitt for an adaptation of George V. Higgins’ 1974 novel Cogan’s Trade, quickly retitled Killing Them Softly.

Higgins’ work is known for its sense of authenticity, picked up from his years spent working as a Boston reporter and later practicing law, where he worked both sides of the fence, as a deputy assistant attorney general for the Commonwealth of Massachusetts at one point, and as a private defense attorney at another (for this latter period, he represented such disparate figures as Black Panther Eldridge Cleaver and Watergate mastermind G. Gordon Liddy). But Higgins, who died in 1999 at the age of 59, is best remembered as an author, and his most enduring work remains his sterling debut from 1970, The Friends of Eddie Coyle, about a small-time gun dealer careening towards doom.

It can’t be overstated how seminal an entry The Friends of Eddie Coyle is within the canon of crime literature: Higgins’ dialog-driven writing style served as the main influence for Elmore Leonard when he transitioned from writing westerns to writing thrillers in the 1970s. Along with the countless authors Leonard would go on to inspire, Higgins’ presence can be strongly felt in the novels, stories and scripts of Richard Price, George Pelecanos, and especially his fellow Bostonian, Dennis Lehane. In his introduction to the 40th anniversary edition of Coyle, Lehane called the book “one of the four or five best crime novels ever written,” and you’d be hard pressed to find any crime buff who disagrees.

Despite Higgins’ prolific output, prior to 2012, The Friends of Eddie Coyle was his only book to be adapted for screen. The 1973 movie of the same name, directed by Peter Yates and starring Robert Mitchum, is arguably just as influential—and brilliant—as the novel, and as harsh and harrowing a crime film as has ever been made. It is also directly responsible for Dominik adapting Cogan’s Trade several decades down the line, his having sought out the author’s work after catching a screening of Yates’s film. Cogan’s Trade was Higgins third novel, set in the same world as Coyle (the link is a supporting character named Dillon, played by Peter Boyle and Sam Shepard, respectively). It was also the first of Higgins’ books that Dominik read.

In it, he saw parallels to the dire state of capitalism following the global economy’s collapse in 2008. As with that catastrophe, the trouble at the center of the novel is the result of reckless schemers taking advantage of the market’s—in this case, the black market—inability to regulate itself. Their actions lead to an industry-wide recession that ultimately takes a very human toll.

Killing Them Softly is but one in a long line of crime films to draw a direct parallel between the mafia and big business (see also: I Walk Alone [1947], Point Blank [1967], the first two Godfather films [1972/1974], and Scorsese’s Greed Cycle. Dominik goes even further than Higgins in tying the one to the other, having one middle management character bemoan the underworld’s utter lack of leadership and “total corporate mentality…”

This political motif is there in the novel, but Dominik draws it out and foregrounds it, even as he stays exceedingly faithful to its plot and prose (there’s no point in adapting Higgins if you’re not going to use his dialog, after all). Aside from moving the action from Boston to a nameless no man’s land that could stand in for any number of blighted urban locales, Boston included (although the actual filming took place in New Orleans), the other big change he made was updating the story from the early ‘70s to November 2008. On that score, it’s surprising—or then again, maybe it isn’t—how little period detail required excising and reconfiguring. Aside from a single appearance of a cellphone, the only thing that cues us into when the film takes place is the omnipresent specter of the 2008 Presidential election by way of its detritus—radio soundbites, television footage, billboard advertisements.

It’s small wonder that audiences, by and large, either hated the film (it received an F Cinemascore) or outright ignored it (although thanks to its modest budget it actually did turn a profit at the box office). Coming as it did only a few short weeks after Obama secured his second term in office, everyone was utterly exhausted by election talk, nor was anyone keen for so despairing a look at the State of the Union so soon after the candidates had just finished litigating it to the voting public.

Actually, it’s wrong to call the film ‘despairing,’ as that imbues it with too much sentimentality. Killing Them Softly is all spleen and venom, a feature length spit in the eye to the so-called ‘American Dream.’ Its bitter worldview is perfectly summed up in its jaw dropping final scene (courtesy of Dominik, who expands on the novel’s ending), in which Cogan is informed he’ll have to accept a smaller payout than he had counted on. Advised to heed the words of Obama’s victory speech, in which the President Elect called upon the nation to “reaffirm that fundamental truth—that out of many, we are one,” he responds:

“Don’t make me laugh. ‘We’re one people.’ It’s a myth created by Thomas Jefferson…My friend, Jefferson’s an American saint. Because he wrote the words, ‘All men are created equal.’ Words he clearly didn’t believe, since he allowed his own children to live in slavery. He was a rich wine snob who was sick of paying taxes to the Brits. So yeah, he wrote some lovely words and aroused the rabble, and they went out and died for those words while he sat back and drank his wine and fucked his slave girl. This guy wants to tell me we’re living in a community? Don’t make me laugh. I’m living in America. And in America, you’re on your own. America’s not a country, it’s just a business. Now fucking pay me.”

Despite the transgressive power of this speech (to say nothing of its convincingness), Killing Them Softly doesn’t operate as a riposte of the harsh realities that undergirded the failed optimism of Obama’s first term, so much as a terrible glimpse into the reckoning of the decade to come. For Jackie Cogan is not merely giving voice to noir’s inherent fatalism and cynicism, nor is he simply taking the political pessimist’s view of late stage capitalism. Rather, he’s delivering a full-fledged Sermon on the Mount, one that, viewed today, seems impossible to denounce. Cogan—who enters the picture accompanied to the sound of Johnny Cash’s Judgement Day ballad, “The Man Comes Around”—is both proselytizer and prophet, as evinced by his earlier declaration that “there’s a plague coming.”

With said plague now well and truly upon us, our economy in shambles once more, our leadership utterly absconded from its responsibilities, and another bitter Presidential election just around the bend, there is no crime film—there is perhaps no film, period—more spiritually attuned to our current season in hell. 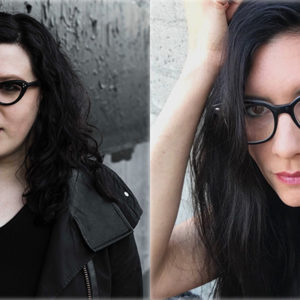 I’m a professional crime writer who’s sold multiple psychological thrillers to a major publisher. But I have a confession...
© LitHub
Back to top