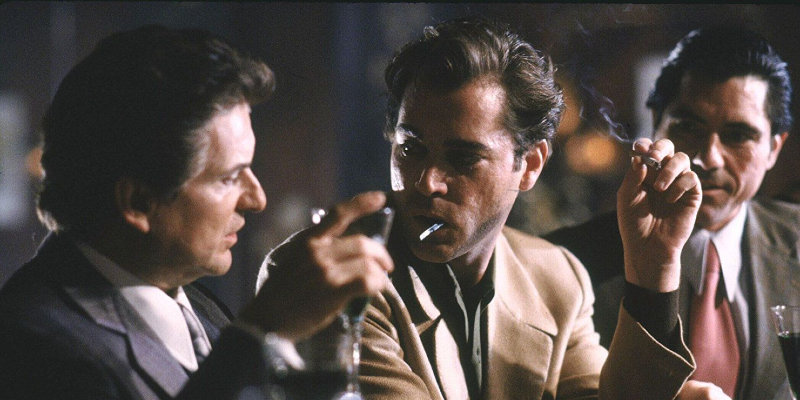 For decades, the director has been charting a dark, debauched journey up the criminal ladder.

“To me, being a gangster was better than being president of the United States.”
—Henry Hill (Goodfellas)

Although Martin Scorsese has worked across a number of diverse genres and formats throughout the course of his 50-plus year career—including documentary, comedy, romance, musicals, psychological thrillers, biblical epics, children’s fantasy and more—to the casual moviegoer, he remains most closely associated with his gangland sagas, including Mean Streets (1973), Goodfellas (1990), Casino (1995), Gangs of New York (2002), and The Departed (2006).

It’s understandable then, that his latest film, the post-war mob drama The Irishman, which is set to open the New York Film Festival later this week, before its release via Netflix later this autumn, should be met with so much anticipation—arguably the most of any film he’s ever made.

Based on Charles Brandt’s 2003 nonfiction book I Heard You Paint Houses, The Irishman traces the life of union leader-turned-hitman Frank Sheeran (Robert De Niro), including his alleged involvement in the 1975 disappearance of Teamsters president Jimmy Hoffa (Al Pacino). It appears to be something of a capstone to Scorsese’s multi-film examination of the American mafia. Given the filmmaker’s advanced age and wide-ranging interests—upcoming and rumored projects include adaptations of the period true-crime (but mobster-less) books Killers of the Flower Moon and The Devil in the White City, as well as biopic of Theodore Roosevelt—it doesn’t strain credulity to assume this may well be his final statement on the subject.

That assumption certainly adds another level to the hype to the film, although those expecting a Goodfellas or Casino for the modern era—The Irishman reunites Scorsese with De Niro and Joe Pesci for the first time since the latter film, nearly 25 years ago—may need to temper certain expectations. According to the man himself, in an interview with The Independent, he’s going for something different this time around:

“You know, Goodfellas and Casino have a certain style that I created for them—it’s on the page in the script actually. Putting Goodfellas together was almost like an afterthought, at times I was kind of rushing…the style of the picture, the cuts, the freeze-frames, all of this was planned way in advance, but here it’s a little different. The people are also older in The Irishman, it’s certainly more about looking back, a retrospective so to speak of a man’s life and the choices that he’s had to make.”

The film’s trailer certainly seems to promise a statelier and more mythic affair than his other hyperkinetic mob films, which are, in many, workplace comedies with higher-than-normal stakes. At this juncture, The Irishman appears to hew closer to the Greek tragedy of Francis Ford Coppola’s Godfather series, the elegiac opera of Sergio Leone’s Once Upon a Time in America, or even Scorsese’s own grand historical American melodrama, Gangs of New York.

Whether or not these comparisons turn out to be apt, and regardless of how The Irishman is received when all is said and done, it will, by dint of its retrospective nature and post-war period setting, fall outside a particular subcategory—or cycle—of crime films within Scorsese’s oeuvre. This cycle currently consists of four films—the aforementioned Mean Streets, Goodfellas and Casino, as well as his late-period masterpiece, The Wolf of Wall Street (2013).

These four films are often brought up together, though they tend to be separated into two distinct tryptics: Mean Streets, Goodfellas and Casino are looked at as sibling films thanks to the crossover in theme and, perhaps more importantly, casting (De Niro is central to all three, as is Pesci for the latter two). Mob scholar, author and Goodfellas/Casino screenwriter Nicholas Pileggi said as much on the audio commentary for Casino, stating “It’s like a trilogy…Mean Streets was just kids. Goodfellas, it was like the kids from Mean Streets growing up, the middle class. But [Scorsese] was also fascinated by the top world of the mob, and that of course was Casino.” 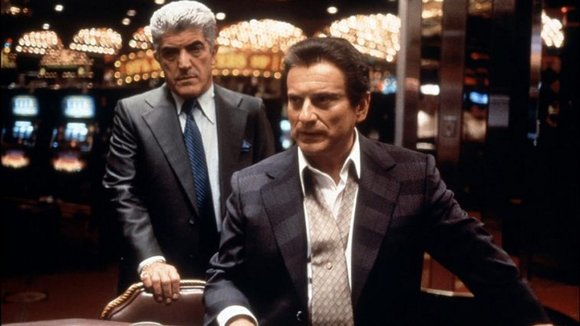 Meanwhile, Goodfellas, Casino and The Wolf of Wall Street, which taken together are sometimes referred to as Scorsese’s Greed Trilogy, share so much in the way of mise en scène and formalist style that to call them sibling films doesn’t do them justice—they’re triplets.

For all their obvious crossover—including recurring cast members, editing and visual style, use of voice-over narration, soundtrack (cue The Rolling Stones) and thematic resonance—all four films also comprise something of an overarching narrative, one which looks at the concept of organized crime not as a violent outlier or unintended byproduct of modern capitalism, but as one and the same. And though the films within this cycle may depict the rise and fall of the particular criminal syndicates and individual antiheroes at their center, taken as a whole, they chart the steady ascent and unbroken legitimization of crime within the fabric of our national enterprise, while looking at how it mirrors that most American of dreams: upward social mobility.

In Mean Streets, we follow a close-knit group of small-time hoods and low-rent hustlers only a couple steps and a few years removed from kids on the playground. They treat the street as one big playground, fighting each other over pocket change and school-yard insults (that is, when they’re not pulling pranks like blowing up mailboxes or shooting out tenement windows). Even when the stakes get raised and things turn deadly, its only over the matter of a couple grand.

Although the great theme throughout all of these films is that human beings are entirely disposable in the face of wealth and power, the characters in Mean Streets find themselves on the lowest rung of the criminal ladder and are thus the most disposable. When their time comes, they’re shot down in the street and left to rot like so much garbage.

In Goodfellas, the neighborhood punks have moved out of the neighborhood and up a couple rungs of the ladder. These are middle-management, middle-class guys, like Pileggi said. For all that they look down their noses at everyday schnooks, they charted the exact same course of suburban white flight as so many others of their generation. As a result, their lifestyle becomes flashier and their appetites expand alongside their privilege, but in the end, it’s all shown to be a façade. For all their flash, they continue to live paycheck-to-paycheck (or score-to-score, as it were) while struggling (and failing) to build any kind of nest egg. Granted, there’s a difference between some white-collar office worker losing their retirement savings through shoddy pension investments and a gakked-out gangster losing his because his wife flushed his coke stash down the toilet—but the end result is the same.

Ultimately, it’s really only ceremony that separates the characters of Goodfellas from those of Mean Streets. When Henry Hill explains how a guy gets whacked, saying “There aren’t any arguments or curses like in the movies. See, your murderers come with smiles…” anyone who’s ever been called into HR and laid off or demoted can relate.

If Goodfellas shows what happens when the kids from Mean Streets move from minimum wage work to a salaried position, then Casino shows what happens to those same middle-aged middle-managers get promoted to executive status. It’s barely even a metaphor by this point, as Casino explicitly looks at the way crime went corporate during the rise of Las Vegas starting in the early ‘70s.

This world is no less violent or corrupt than those previously depicted by Scorsese; in fact, it’s worse on both fronts, the violence and corruption accelerating at the same speed as the wealth surrounding it all. It’s just that everyone is so distracted by the ungodly amounts of money pouring in on an hourly basis that they take even less notice of the carnage around them—until of course they get caught up in it. Such is the life of the corporate set; if you can somehow make it through said carnage, you’re given a nice retirement plan.

Pileggi referred to Casino as depicting the upper-echelon of organized crime, and while that’s true—here, they’re dealing with sums of money in the hundreds-of-millions—even the people in the inner most circle still serve at the behest of the machine they created. Even after the government clears out the criminal element, the framework of the machine will continue to operate exactly the same, with total impunity. By this point, the operation itself is legitimate.

This leads us to The Wolf of Wall Street, which, funnily enough, Scorsese anticipated 23 years earlier: during the conclusion of Goodfellas, a supporting character can be heard admonishing a group of Feds, “Why don’t you guys go down to Wall Street and get some real f—ing crooks?”

Oakmont-Stratton, the investment firm led by Jordan Belfort (Leonardo DiCaprio) and his pack of alpha-male maniacs, is somehow more debauched and ruthless a landscape than any Scorsese has shown us previously, even if the atrocity on which it runs is usually (though not exclusively) of the non-violent variety. Their dealings are not only legitimate, they’re driving the entire global economy. We’ve moved from corner loan shark operations dabbling in petty cash to the invisible hand of market overseeing so much wealth that it can’t be measured in legal tender, only assayed in the realm of the theoretical (“Fugazi, fug-A-zi, it’s a  whazzie, it’s a whoozie…”). 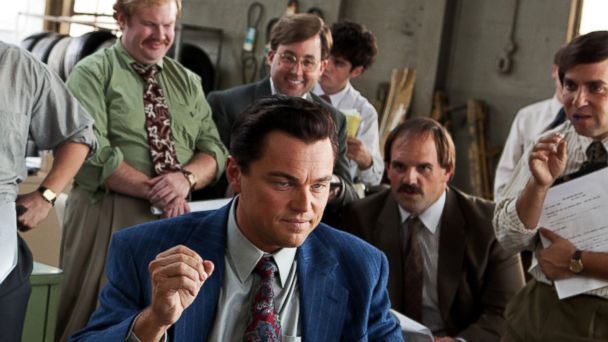 As ever, the people at the center of this world are themselves entirely expendable. In fact, every human being on the face of the earth is expendable when weighed against the market, a lesson that our myriad crashes, recessions and depressions continue to teach us and from which we continue to learn nothing. Still, when these self-described Masters of the Universe meet their personal downfalls, they’re delivered softly to the ground via golden parachutes.

The ending of The Wolf of Wall Street is the most brutally incisive and indicting moment throughout any of Scorsese’s films. Given the direction the country would take only a few short years later, electing as its leader a corporate con artist as unhinged as any found within his film, it is also his most troublingly prescient, which is saying a lot considering how downright prophetic films like Taxi Driver and The King of Comedy have proven.

It’s become a cliché at this point to compare the Trump presidency to a Scorsese film, though it’s hard not to, given that you could swap out most of Trump’s inner circle with characters like Billy Batts and Jimmy Two-Times and hardly anyone would notice, to say nothing of the rampant racism, rage, misogyny, infidelity, greed, gluttony, paranoia, contempt, cravenness, betrayal and bad hair pieces they all share.

There’s a less-than-zero chance that Scorsese ever tackles the Trump White House (although he is very aware of the similarities between the Trump and some of his characters), but that doesn’t negate the fact that the halls of political power would be the natural and logical end point to the saga he started telling all the way back in 1973.

Today, Henry Hill wouldn’t have to choose between being a gangster or President—as Scorsese has shown us, it’s all part of the same trajectory. 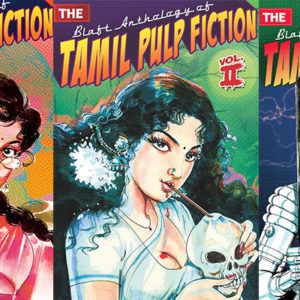 What happens when a professional from the Tamil film industry and a California native with a background in math education...
© LitHub
Back to top