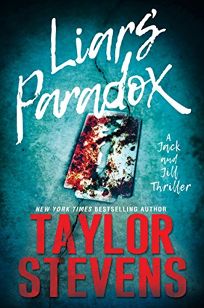 The following is an exclusive excerpt from Liar’s Paradox, the first in a new series from thrillist extraordinaire Taylor Stevens. In the following passage (which just so happens to take place in one of the CrimeReads’ editors old neighborhood) a professional contemplates the challenges involved in a kidnapping as he canvasses the Austin neighborhood in which his target is located.

Quiet gentrified neighborhood and a cloud-covered sky at two in the morning, a perfect mix for breaking and entering. Would have been, anyway, if the house itself hadn’t been lit up like an Omani oil field, every window eating shadows from the neighboring yards in the same way flare burn-off stole night from the deep desert dunes. So, he sat in his car three houses down, hidden in the dark beneath a thirty-foot live oak, watching the front door and debating the options, none of them good.

Bringing in a target was so much easier if it could be dead.

Or at least unconscious.

Her cherry-red Tesla angled out from the curb ahead, obnoxious and sloppy, rear end jutting into the street. A hundred thousand dollars of machined luxury squandered on a vodka-downing, pillpopping, cocaine-snorting, foulmouthed waste of talent who was no closer to a degree now than she’d been at twenty-three, because finishing meant the party would end. God forbid.

A hundred thousand dollars of machined luxury squandered on a vodka-downing, pillpopping, cocaine-snorting, foulmouthed waste of talent who was no closer to a degree now than she’d been at twenty-three, because finishing meant the party would end.

Shadows passed behind curtains in the lit-up house.

Hints of thump, thump bass bled into the street, just low enough that sleep-deprived citizens wouldn’t be inclined to call the cops.

He drummed his fingers in a slow pattern against the steering wheel.

Timing forced him to choose between the hard way and the harder way.

Jacking her car first would be the hard way.

He stepped into early fall air, listened to the city dark, and nudged his door closed.

He walked to her car, dragged his fingers from tail to nose along the cherry-red curves, and patted the sleek rooftop. The Tesla was how he’d found his party-girl needle so quickly in a haystack of millions—more precisely, a little tracking device stuck up inside its wheel well, which probably, legally, made him a stalker.

He touched the driver’s door handle.

The machine opened for the stolen key fob tucked inside his pocket. He popped the hood and trunk, ran a flashlight over empty cargo areas, then let himself in behind the wheel and passed the beam along showroom-clean carpets and spotless leather.

Eight months in and she still hadn’t left a pen cap, a scrap of paper, or a whiff of fast food to mar the interior. The OCD-level tidiness made him uneasy in the same way not knowing how she’d paid for the car made him uneasy.

He’d asked her about the money.

She’d brushed him off with typical snide contempt.

He’d let that slide the first time. The second, he’d accused her of working favors, and she, in turn, had told him to go fuck his high horse. But he knew, and she knew that he knew, there was no other way to bring in Tesla-sized money the way working favors did. He should have cared about that, but he didn’t, not really.

What made him mad was that she played him for a fool, trying to bend his mind around her little games the way she did to everyone else. As if he didn’t know.

He tossed the flashlight aside.

The practical half of him didn’t want this job tonight.

The vindictive half really sorta did.

The practical half of him didn’t want this job tonight. The vindictive half really sorta did.

He peeled the boosted car into the street and out of the neighborhood.

Behind him the shadows against the curtains in the thump-thump house were none the wiser. Behind him, the house flared on.

He left the Tesla at the Walmart Supercenter on Anderson and made the time-depleting two-mile return on foot, back to the quiet neighborhood where the target house still lit the street, back to the live-oak shadows and his car, where he pulled the tool bag from the trunk, dropped it onto the rear seat beside the license plates, dug into the bag, hefted a pair of cuffs, and debated. What he really needed was the tranquilizer, but bringing her in unconscious had the potential to turn things to shit real fast.

He zipped the bag closed.

Quiet gentrified neighborhood and a cloud-covered sky at three in the morning, not ideal for a raucous kidnapping but would have to do.

He crawled his wheels forward to where the Tesla had been, left the trunk open and engine running, and headed for the narrow porch, counting steps and counting seconds, amped on excitement and dread.

Three guys lived here, college students at UT Austin. Quick and dirty background checks had given him the basics. He hadn’t looked for more, because more didn’t matter—it wasn’t the guys he worried about.

In his head the strategy wheel spun.

The front door coursed with beat, drowning any possibility of catching nuance from the other side. He tested the lock. The handle moved freely, sparing him the issue of breaking in or bluffing his way to the other side.

He slipped into the foyer, eyes scanning for movement, ears struggling to hear beyond the bass line, fingers wedging cardboard against the frame to keep the door from closing. He twisted the handle’s thumb lock.

Three steps took him past a wall segment and into a living room decorated in late bachelor not-give-a-shit. The strategy wheel stopped on unexpected element of surprise.

On the couch to his right, what had been gray shadow against the shades became living bottle-blond color. His target, shirtless, straddled and played lip tango with a half-naked Lothario whose hands wandered in places they didn’t belong.

His target, shirtless, straddled and played lip tango with a half-naked Lothario whose hands wandered in places they didn’t belong.

She never heard him. Her guy friend never saw him. He reacted to the gift without thinking, moving fast, because speed was the only way to maintain the upper hand, leaned in behind her, slapped a cuff on the nearest wrist, grabbed the other, yanked both hands behind her back, and locked her in.

She rotated to free the leg pinned between body and couch cushion and registered his presence in a long, slow blink. She was high. Dulled reflexes would save him.

She rose to strike out.

He got an arm around her waist.

He pulled her off her lover; snatched her shirt, purse, and shoes from off the floor; and hefted her, ass in the air, over his shoulder, his arm around her thighs.

Voice and movement and confusion followed in a jumbled sequence:

The weight on his shoulder pitched from side to side. His free hand grasped the cuffs, held on to that handle for life, and he swung for the door.

Lothario lunged after them.

The blonde bucked and twisted and hissed, “Put me the fuck down!”

He made it to the entry and the cardboard wedge and over the threshold before Lothario reached him. He snagged the front door, pulled it shut, and kept on moving.

Behind him the locked handle rattled, and Lothario, slowed by the unexpected, gifted him seconds.

He reached the car, dumped her shoulders first into the trunk together with shoes and shirt, and slammed the lid before she could straight-arm block him from shutting it.

He reached the car, dumped her shoulders first into the trunk together with shoes and shirt, and slammed the lid before she could straight-arm block him from shutting it.

The door to the house opened.

Lothario stood on the steps, shotgun in hand.

Jack pointed a finger at him. “This isn’t what you think.”

A high-pitched Hollywood scream pealed out from the trunk.

Jack dumped himself into the driver’s seat, tossed the purse aside, threw the car into reverse, hit the gas, and tore backward toward the nearest corner.

Lothario, in the middle of the road, cut a swarthy, shrinking, headlight-blinded figure.

At the nearest intersection, Jack swung the car around, pointed the nose in the right direction, and drove, jaw clenched, at just over the chest crushingly slow speed limit. The screaming in the trunk turned into swearing.

The swearing turned to threats.

And the threats turned to an attack on the interior of the trunk.

He focused on the road.

The taillights had been reinforced long ago to keep her from kicking them out, and he’d rewired the trunk release for the same reason. Not that he’d known this day would come, but like swiping her spare key fob shortly after she’d bought the car, he’d always been the type to plan ahead.

He turned the radio on and thumbed the volume to max.

Yelling from the back rose louder than the music, every word punctuated by a punch and kick. “You’re dead, John. Dead, dead, dead. I will destroy you. Dead!”

He checked mirrors and switched lanes.

Death and destruction were serious considerations. The more immediate concern was getting across the city without drawing unwanted attention.

The assault against the back picked up tempo.

The car rocked with each hit.

He had the package. Delivering it would be a whole different matter. The streets weren’t nearly as empty as they’d need to be to keep this up the whole way. He lowered the radio volume and yelled toward the rear. “Shut up for a minute. I’m letting you out. I just need to find a place.”

She punched the backseat and kicked the trunk lid and howled.

The mental strategy wheel flung round and round, scanning through options while he crawled along at forty miles an hour.

He passed a strip mall.

The mental pointer seized up and flung right.

He’d hoped to get a little farther into nowhere before uncaging the tiger, but this was as good a place as any. He swung hard into the alley behind the dark storefronts, bumping over speed cushions and into potholes, squeezing between dumpsters and a brick retaining wall that separated commercial from residential.

If death and destruction were in the cards tonight, he wasn’t going easy.

Left hand on the wheel, right hand beneath the seat, he released a Baby Eagle, pulled tight into an open space, yanked the emergency brake, and was out and moving before the chassis fully settled. 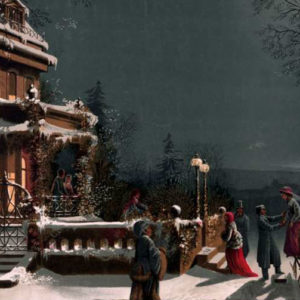 Christmas Mysteries: A Tradition Revived The last few years have seen a new Christmas tradition emerge among crime readers in the UK, or rather re-remerge—Christmas...
© LitHub
Back to top