The last few years have seen a new Christmas tradition emerge among crime readers in the UK, or rather re-remerge—Christmas murder mysteries. Thanks to a number of rediscovered and republished novels readers can now spend the holiday season indulging in a spot of murder from the 1930s “Golden Age” of crime fiction. It all started with the British Library and the crime writer Martin Edwards. British publishers are required to give a copy of every UK publication they issue to the Library, however small its print run or obscure its readership. Edwards (a prolific crime writer himself) began digging back into the Library’s vast vaults of original manuscripts. He unearthed any number of old murder mysteries from the 1930s that were obviously written to cash in on yuletide market back before the war (and TV, Netflix and the Internet of course). With a good log fire roaring, a glass of mulled wine, a mince pie, some tinsel and Christmas lights to cheer up the place, these novels may not exactly be crime classics, but they are a bit of festive fun.

Typical of the fare is J. Jefferson Farjeon’s Mystery in White, first published in 1937 (and now republished in the British Library Crime Classics series). It’s Christmas Eve and a heavy snowfall has blocked a train near the village of Hemmersby. A group of passengers take refuge in a handily situated empty country house nearby. Nobody appears to be at home but the table is set for dinner and a fire has been lit. The random group of people decide that there’s nothing for it but to spend Christmas in the strange house. Then… a murder… Mystery in White was not the first festive novel of crime’s “Golden Age,” but it is prototypical of the genre of Christmas mysteries—an English country house isolated in a snowdrift, a group of people all heading home, or to relatives, for the Christmas holidays, a log fire for everyone to gather round, resentments seething just below the surface of civility, murder, and then a self-appointed detective who is rarely an official policeman. Farjeon, whose father was a Jewish immigrant to London’s East End, was a prolific crime writer between the wars, much admired by Dorothy L. Sayers and he kept a keen eye on trends popular with crime readers—Christmas included.

Though he perhaps perfected it, Farjeon did not originate the Christmas mystery genre. Anne Meredith published Portrait of A Murderer in 1933 (also once again available from the British Library). The opening lines set the scene: “Adrian Gray was born in May 1862 and met his death through violence at the hands of one of his own children, at Christmas 1931.” Gray has invited his six children and extended family to spend Christmas at Kings Poplars, his lonely old country house (which is, of course, snowed in). On Christmas night he gruesomely and mysteriously meets his end; his family are left alive in the house to work out (around the roaring log fire naturally) which one of them did for the old boy and why. Anne Meredith was one of many pseudonyms for the writer Lucy Malleson, a prolific author right through until the 1960s, though sadly rather forgotten today.

Another classic of the genre is Mavis Doriel Hay’s The Santa Klaus Murder from 1936 (and now available once more thanks to the British Library). The Melbury family are gathered for Christmas at their country estate Flaxmere (the book comes with a detailed map of the house) which is (you’ve guessed it) cut off by heavy snow. On Christmas Day the patriarch of the Melburys, Sir Osmond, is found shot in the head by someone dressed as Santa Klaus. This particular Santa obviously does not dispense much good cheer and is the obvious suspect. Hay was another author much admired by Dorothy L. Sayers, though she only wrote three crime novels and preferred to immerse herself in the study of English rural handicrafts. She is therefore remembered as the only lady crime novelist of the Golden Age who achieved bestseller status with both a murder mystery whose suspect is an imaginary old gentleman who gives good children presents at Christmas and a study of traditional quilting techniques in Victorian Hertfordshire.

After the success of the British Library reprints everybody seems to be now digging into the archives looking for “Christmas Classics.” This has meant some rather sub-standard yuletide slayings have appeared on the shelves—but I won’t bother putting any of them in your Christmas stocking. Still, Pan Heritage Classics list includes C.H.B. Kitchen’s 1934 novel Crime at Christmas, which is totally the real deal. A completely snowed in Hampstead (North London’s poshest and most literary suburb) where the residents of a smart mansion block, Beresford House, are gathering around a smart art-deco roaring log fire for Christmas celebrations. Then…you guessed it…a murder. In a slight twist on most Golden Age murder mysteries the self-appointed detective among the guests is a stockbroker! Though not much (if at all to be honest) read these days Kitchen was, in many ways, the archetypal English country house mystery writer, or at least how we might imagine such creatures—independently wealthy, Oxford-educated, a successful barrister, gay, gifted at chess and bridge, while regularly supplementing his not inconsiderable wealth on the stock market. He subsequently retired from the law to breed greyhounds and write murder mysteries—both of which he excelled at.

At the stroke of midnight a dead body is found at the foot of the chimney…looking rather like Father Christmas. Naturally, with his knowledge of cigarettes and romance novels, Tremaine takes it upon himself to investigate the killing.

The trend for Christmas murders continued after the war. Francis Duncan’s Murder for Christmas was published in 1949 (and now once again by Vintage). The Golden Age Christmas tradition of slightly off-beat self-appointed detectives was taken to extremes with Mordecai Tremaine, a former tobacconist and perennial lover of romance novels and so clearly a “natural” in the murder-solving game. Tremaine has been invited to spend Christmas in the sleepy village of Sherbroome (as all English villages are indeed “sleepy” in this genre), the country retreat of one Benedict Grame, which has, amazingly, found itself snowed in for the duration. At the stroke of midnight a dead body is found at the foot of the chimney (literally in this book in the log fire), looking rather like Father Christmas. Naturally, with his knowledge of cigarettes and romance novels, Tremaine takes it upon himself to investigate the killing. Duncan was the pseudonym for William Underhill who wrote over twenty crime novels between 1937 and 1953 to supplement his meagre salary as a schoolteacher. When not teaching young schoolboys arithmetic or plotting pretty complicated and twisty murder mysteries Underhill wrote about a dozen school textbooks on the fascinating subject of multiplication tables. At some point teaching sums, writing books about maths and even crime novels weren’t enough and he cranked out five historical romances under the pseudonym Hilary West.

As well as all these republications the Christmas murders trend has undergone something of a revival in recent decades. Jill McGown’s Murder at the Old Vicarage (1988) certainly has the feel of the 1930s, and was written as an homage to Agatha Christie. The usually charming village of Byford is…wait for it, wait for it….snowed in. The locals all gather for an isolated Christmas until, the vicar’s son is murdered. It should be an open and shut case for the local Chief Inspector but, small English villages being what they are (think Midsomer Murders), the potential tweed-wearing, volunteering-at-the-church, genteel-retired-folk psycho killer suspects are legion. And we should never forget that, of course, Christie herself was never going to be left out of the Christmas murders phenomenon—Hercule Poirot’s Christmas was published in 1938. It is Christmas Eve and multi-millionaire Simeon Lee has gathered his family at his home (a country house of course) for the holidays. Having a festive dry sherry and mince pie downstairs around the inevitably roaring fire they all hear a terrible crash. Simeon Lee is dead…enter the fussy little Belgian with snow on his boots.

More recently, Edward Marston’s Inspector Colbeck series of mysteries is set on Britain’s Victorian railway network has taken a festive turn. A Christmas Railway Mystery (2017) takes place in December 1860 and offers us a gruesome murder of a railway worker right on the eve of Christmas. Val McDermid offers up two grisly Christmas tales in her short story collection Christmas is Murder (2012), while the anthology Murder Under the Christmas Tree (2016) includes stories ranging from Arthur Conan Doyle, through the Golden Age writers Marjory Allingham and Dorothy L. Sayers, to Ian Rankin. And finally, in 2016, the “Queen of Crime” and creator of Scotland Yard detective/amateur poet Adam Dalgliesh, P.D. James published The Mistletoe Murder and Other Stories (published posthumously in 2016), a collection of Christmas-themed murders James wrote over the years for British newspapers and magazines.

The Mistletoe Murder is satisfyingly consistent with the basic tenets of the “Golden Age” festive mystery but with that little extra we know P.D. James can deliver. It is wartime Christmas; we are in a country house; there is a blanket of fresh snow on Christmas morning and it’s cold enough that a decent fire needs to be lit. We get “all the trimmings”—a roasted goose, ivy, mistletoe, a decent Malt after dinner, and a murder in the library. As ever the detective is not a professional but rather, in this case, a young war widow doing her bit for Blighty in the Women’s Auxiliary Air Force. It’s a perfect short story with all the festive atmosphere, a genuine mystery, a little humor, and a very satisfying ending.

So after the presents, the turkey, the claret, the pudding and the Irish coffees (or whatever your preferred variant of Christmas Day is) if you think a whole Golden Age Christmas mystery might be a bit tough on your drooping eyelids then I heartily recommend at least this short story before bedtime. 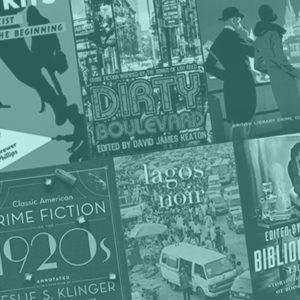 Crime anthologies come in all shapes, colors and sizes, and this list of the best anthologies of 2018 reflects the incredible...
© LitHub
Back to top