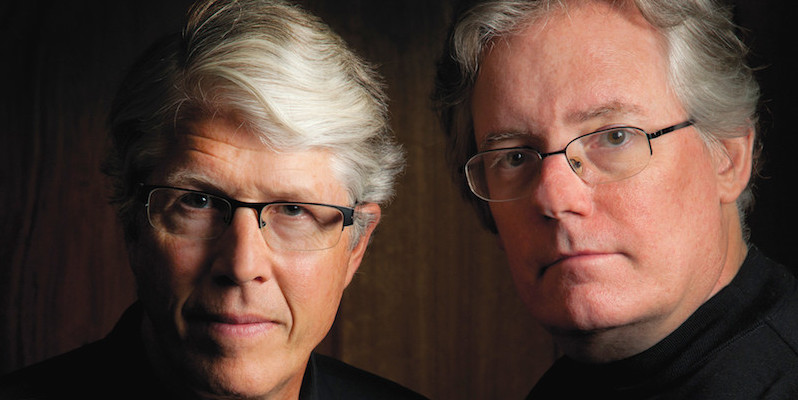 The successful writing duo on keeping a partnership going, their new tale of Donner Party horrors, and the end of the world.

If you’ve spent time in a bookstore’s horror or scifi section, or follow the world of techno-thrillers, you’re probably a huge fan of the collaborative writing duo Preston & Child. Douglas Preston and Lincoln Child have been writing together for over 20 years, ever since the release of 1996’s Mount Dragon, and many books and multiple series later, they’re still going strong. Their latest thrilling endeavor, Old Bones, takes us into a fictional lost camp of the Donner Party as treasure hunters and archaeologists compete to find a stash of gold coins while using some very real science to analyze the site and its gruesome artifacts. Douglas Preston and Lincoln Child—or Doug, and Linc, as they charmingly refer to one another—were kind enough to answer a few questions via email about their latest book, their impossible-to-categorize oeuvre, and how the world’s most likely to end.

CrimeReads: Let’s start with the basics—y’all are a highly successful writing duo that has managed to work together for decades. How do you keep the collaboration fresh and interesting?

Lincoln Child: In a strange way, the more books we write, the easier it gets to work together. We ironed out the kinks a long time ago, and we respect each other as much or more now than when we first became friends. If there were going to be serious ego or other issues, they would have surfaced a dozen or more books back. (We also know how difficult—albeit satisfying—it is to write solo novels.) One side effect of this is that just about every part of the joint writing process is enjoyable, including working out new storylines and characters, etc. We both have voracious curiosities, be it about historical mysteries or strange new technologies, and since we have different interests this gives us a very deep well to draw from. Also, we are committed to never growing stale or writing the same book over and over again, as (alas) sometimes seems to happen with extended series, and so—although we challenge each other throughout the entire writing process—perhaps the most effort and back-and-forth occurs during deciding on what to write next. Hence the freshness. I hope.

Douglas Preston: The most important point that Linc makes is that we trust each other’s judgment and taste. If Linc tells me something I’ve written is pure garbage, after I have thoroughly damned him to hell, I have to accept that he’s right—that’s why he’s my partner, because I trust his taste, and expect him to break the bad news to me about something I’ve written, or vice versa…

Your works can veer quickly from horror to humor and back again. How do you balance humor and action in your works?

LC: Although we of course hoped it would be a success, we were nevertheless as surprised as anyone when Relic, our first book, was ultimately published in hardcover and then picked up by Hollywood. We take great pride in our books, but we have also learned to never take ourselves too seriously. I think all, or almost all, of the best horror stories have veins of humor running through them to a greater or lesser degree. It’s those lighter moments that give the audience a moment to breathe…but also let down their guard. Look at Hitchcock.

DP: The great Irish writer Patrick Kavanaugh once said that tragedy is merely underdeveloped comedy. In my opinion, a humorless thriller is only half a book. Even Shakespeare’s darkest tragedies are salted with comedy and even farce. 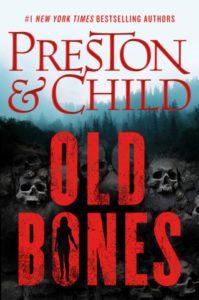 DP: The tragedy of the Donner Party is certainly one of the most horrifying episodes in the settling of the American west, in which members of an emigrant caravan became snowbound in the mountains of California, with many of the survivors eventually eating their dead friends and relatives. There were several camps of Donner Party members. The wagon train was strung out at the time they were stranded, miles apart. These camps have been excavated over the years, with very interesting results. For fictional purposes, we posited a third camp that hadn’t been found and excavated. The novel is about the discovery of that particular camp and its excavation—and the horrors that ensue, far worse than mere cannibalism.

What’s the craziest research story y’all have? Did you spend a winter camping out in the mountains for verisimilitude? Is there a lost third co-author of the book still up in the mountains?

DP: I spent some time backpacking in the Sierra Nevada of California, so I had a good sense of the landscape and setting. As for the craziest research we’ve ever done, it wasn’t for this book, but for a novel entitled Gideon’s Sword. I made a guerrilla landing on Hart Island, in Long Island Sound, for research. Hart Island is owned and run by the NYC Department of Corrections, and it is where prisoners bury the bodies of indigent and unclaimed corpses found in New York City—the largest Potter’s Field in the world, with over a million graves. I was caught by prison guards and just barely escaped without being arrested. Check out the pictures!

All of your books have an almost 19th century sense of awe at the world and its deep history, and fear of what man hath wrought in the name of science. How do you come up with the ideas for your plots, and how do you see your relationship with the many dramatic settings you employ?

DP: The most difficult question for an author to answer is this one—how do you come up with your ideas? This is a mysterious process and I don’t really have an answer, except to say that many of them seem to grow out of our extensive reading in science and technology. Sometimes the dullest article will give us an idea for the creepiest book. It must be said, however, that there is a long journey from an idea to plot. That takes many arguments and discussions, and much heating and pounding of iron in the forge of our minds. As for settings, we research them deeply, usually visiting them in person (this is one of my jobs, not Linc’s, who does not like to travel.) Although our recent Pendergast books have been set in Florida, where Linc recently moved, and so the settings there are mostly due to his research.

Your books also incorporate realistic explorations of science and technology, but are never in the realm of science fiction. At the bookstore I used to work at, y’all were shelved in horror. Is horror now the best section to explore the consequences of technology? Or are you just really hard to shelve?

LC: When our earliest books came out, such as Relic and Mount Dragon, there was a lot of problem categorizing them. We called them techno-thrillers, a term that I don’t believe was in common use at the time and is still relatively rare now. Although as a writer I’m pleased that our books are rather unique hybrids, it might bring us more reader attention if we were easier to shelve. We definitely aren’t writing horror novels. We’re not writing science fiction, either, although we sometimes like to set our books a year or so in the future so that we have a freer hand with recognized (if still developing) technologies. We clearly aren’t writing murder mysteries, although mass murders are Pendergast’s metier. ‘Thriller,’ though imperfect, still remains the closest classification.

And to piggy back off of this question—since y’all are the experts, what technological or scientific innovation is most likely to kill us?

LC: I always thought it would be nuclear fission, but it’s been almost seventy-five years, and we’re still here, so….it’s really hard to say. It’s something I speculate about so often, as part of my job as a thriller writer, that I can’t just narrow it down to a single scenario or conjecture. There are obvious choices like greenhouse gases or some dreadful lab-enhanced spillover virus, and somewhat more exotic choices like a genocidal AI machine blitzkrieg or perhaps a World War III that involves malware and cyberattacks (instead of nukes) in such drastic escalation that it leaves us powerless and moribund as a species.

DP: Of all the threats we face, I believe an engineered doomsday virus might be the most dangerous. You only have to see what happened during the so-called Columbian Exchange to see the results: some 90% of the population of the New World died from Old World diseases to which they had no natural resistance. That was three times the mortality rate of the black plague. We’re closing in on the technological ability to design and unleash a doomsday virus, and you know that some crazy, apocalyptic terrorist group would like other more than to do this. But we won’t write a book about that because it’s been very well covered by other thriller writers. We sort of covered the subject in our early novel, Mount Dragon. 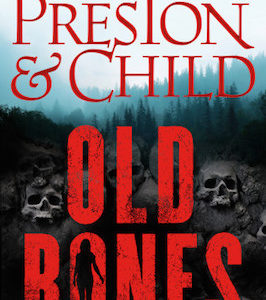 "I first heard the story of the Donner Party as a young boy growing up outside San Francisco,” Benton began. “I mentioned...
© LitHub
Back to top