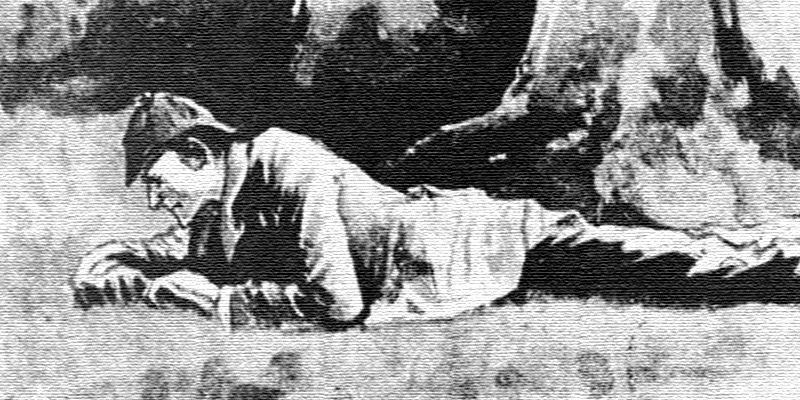 In this series, our editor Olivia Rutigliano rereads every Sherlock Holmes story, and puts together a small close-reading. This week: “The Boscombe Valley Mystery” from The Adventures of Sherlock Holmes (1892).

It’s humid today in New York City, where I live, so I read “The Boscombe Valley Mystery,” a Sherlock Holmes story that is very much about barometric pressure. Holmes obsessively refers to a barometer while he is out and about in Herefordshire, investigating a local murder—he is checking the atmospheric pressure because he is concerned that, if it rains, the outdoor crime scene will be completely ruined. But the story’s omnipresent barometric readings also supply a handy metaphor; “The Boscombe Valley Mystery” is a story of long-simmering pressures between two men and how they finally, one day, burst into a storm.

The story’s muggy weather patterns and its central mystery are entwined. Right from the get-go, the case is rather hazy, to the point where most people (Dr. Watson, Inspector Lestrade, the press) insist that there are no ancillary clues to be found and therefore declare it to be (conversely) open-and-shut. They would rather zero-in on the few players in focus and try to bring clarity to their probable motives. Holmes insists that there are other clues, and even other players, out there in the fog.

The facts of the case are these: in Boscombe Valley, on one of the farms lent out by the region’s largest landowner, Mr. John Turner, a tenant named Mr. Charles McCarthy is found dead in the woods by a small lake. Witnesses reported that his own son James walked into the woods with a gun. Others overheard a loud argument between the two men. And shortly thereafter, a bewildered James ran back to the house, screaming that he had found his father dead on the ground. James didn’t have his gun then, and when the police came to investigate, they declared that Mr. McCarthy had died of head trauma, which might have been inflicted by a gun barrel. James was arrested. And if Alice Turner, the daughter of the landowner John Turner, had not insisted that the police contact Sherlock Holmes, the case would have been closed with James being convicted as the murderer.

Holmes, who has read all the press coverage of the case, sends Watson a telegram telling him to get to Paddington Station at once, and, at the urging of his wife Mary, Watson obliges. The two board a train headed for the country, with Holmes insisting that the case is both too murky and too concentrated for the police to have found the correct man. And when they meet Inspector Lestrade in the country, Holmes tells him as much. Lestrade, though, disagrees.

Holmes literally refers to the case as “fog”; when Lestrade suggests that the notion that anyone but the obvious suspect committed the murder is mere moonshine, Holmes makes a pun, joking that “moonshine is a brighter thing than fog.”

Holmes is curious about a few elements of the case, namely that James insists he did not know his father was in the woods when he headed there with his gun (he had just arrived home after a few days away and intended to hunt some rabbits), and ran into his father after hearing his father call out a particular sound: “cooee,” which had previously become a signal between them. Holmes reads the coroner’s inquest, in which James notes that he and his father did have a quarrel, presumably over Mr. McCarthy’s insistence that James marry Alice (Mr. Turner’s daughter). James says that he left his father then, and only came back to find the body after hearing sounds of a struggle. The coroner asks how his father could have made their particular call of “cooee” if he did not know James was in the woods. James doesn’t know the answer. Holmes is intrigued.

Holmes gradually exposes the complicated backstories of both the McCarthy men—that James is indeed in love with Alice (but won’t marry her because he secretly, foolishly wed someone else a few years earlier, who was herself a bigamist), and that Mr. McCarthy was meeting someone by the lake where he was killed, someone else he signaled to with the distinctive call of “cooee.”

Holmes is intrigued by this sound, which he notes is Australian in origin; indeed, both Mr. McCarthy and Mr. Turner had expatriated the Australian colonies for England. But he comes to the conclusion that Mr. Turner is the killer by visiting the crime scene—which has been tramped over and muddied up by the constables inspecting the area, but which is still valuable as long as there is no rain. Holmes keeps checking “the glass” to measure the pressure, and, worried his time is running out, heads to the area where Mr. McCarthy was found dead.

Here, Holmes transforms. Watson writes, “Lestrade showed us the exact spot at which the body had been found, and, indeed, so moist was the ground, that I could plainly see the traces which had been left by the fall of the stricken man. To Holmes, as I could see by his eager face and peering eyes, very many other things were to be read upon the trampled grass. He ran round, like a dog who is picking up a scent…”

Holmes does quite a bit of reading in the canon, but he does a hefty amount of it in “The Boscombe Valley Mystery.” He reads his pocket Petrarch on the train after he’s done with the newspapers, and in the evening at their lodgings, he begs Watson not to talk of the case but rather to discuss George Meredith’s novels with him. Holmes likes reading, and certainly he likes reading people. As we know, his greatest skill is studying the appearances of the individuals he encounters, and inferring things about them from tiny, almost imperceptible details. But the increasing pressure of the case—perhaps because the life of James McCarthy hangs in the balance, perhaps because the atmosphere is gathering a storm—transforms everyone’s normal reading abilities.

Holmes’s reading skills grow stronger, while everyone else’s grow weaker. Lestrade is completely off-base in his assessment, and so is Watson. Watson can’t even read proper reading materials. He says, “I lay upon the sofa and tried to interest myself in a yellow-backed novel. The puny plot of the story was so thin, however, when compared to the deep mystery through which we were groping, and I found my attention wander so continually from the action to the fact, that I at last flung it across the room and gave myself up entirely to a consideration of the events of the day.”

But Holmes’s skills grow exponentially, so much so that he is even able to read land—to track, like a dog. Watson notes how he nearly pops out of his own skin, crawling on the ground and running in circles, when examining the crime scene:

“Sherlock Holmes was transformed when he was hot upon such a scent as this. Men who had only known the quiet thinker and logician of Baker Street would have failed to recognise [sic] him. His face flushed and darkened. His brows were drawn into two hard black lines, while his eyes shone out from beneath them with a steely glitter. His face was bent downward, his shoulders bowed, his lips compressed, and the veins stood out like whipcord in his long, sinewy neck. His nostrils seemed to dilate with a purely animal lust for the chase, and his mind was so absolutely concentrated upon the matter before him that a question or remark fell unheeded upon his ears, or, at the most, only provoked a quick, impatient snarl in reply.”

Indeed, Holmes’s physical transformation suggests his own abilities pressurized to a new level of ferocity, much like the approaching rainstorm—much like the murderer himself, who turns out to be Turner. Turner, it turns out, was being blackmailed by the cruel McCarthy for decades, since they were both in Australia and McCarthy had once caught Turner completing a gold heist. Finally, after tensions simmered for years, they reached a final boiling point—after Turner came to the spot to meet the blackmailer McCarthy and overheard him yelling at his son about being dead-set on combining the two families forever, by forcing his son to propose to Turner’s daughter. In a rage, Turner fought back against the man who had long extorted him.

Holmes gets Turner to confess anonymously; he is dying anyway and has been sick with worry at the idea of accidentally framing James. Holmes uses the confession to free James, who intends to properly handle his affairs and ask Alice to marry him.

Watson notes, after the two men realize they have freed a family from McCarthy’s vice, that the “black cloud” that had hung over the families has passed over the younger generation now. Thanks to Sherlock Holmes, there will be sunny days ahead.

The Most Anticipated Crime Books of Fall 2022 (and Beyond!) 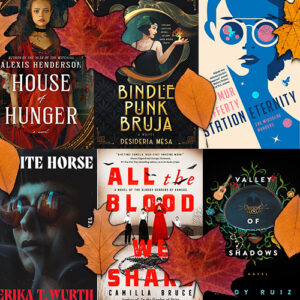 The Most Anticipated Crime Books of Fall 2022 (and Beyond!)

It may not be cooling down yet, but it's gothic season, baby! And dark academia season, and social horror season, and folk...
© LitHub
Back to top