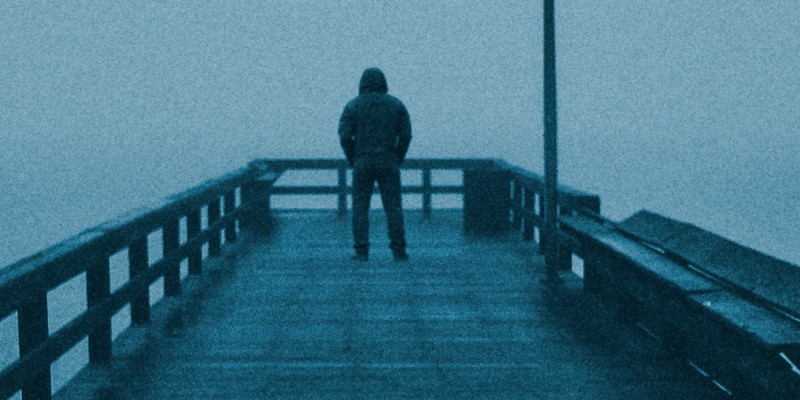 Gus Garcia-Roberts on corruption, electioneering, and how Jimmy Burke started his rise in Suffolk County.

In 1979, the gruesome slaying of a thirteen-year-old boy riveted the suburbs of Suffolk County, New York. As the county hustled to bring the case to a dubious resolution, a wayward local teenager emerged with a convenient story to tell. For his cooperation, Jimmy Burke was rewarded with a job as a cop. 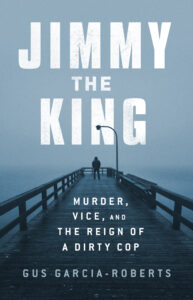 Thus began Burke’s unlikely ascent to the top of one of the country’s largest law enforcement jurisdictions. He and a crew of likeminded allies utilized vengeance, gangster tactics, and political leverage to become the most powerful and feared figures in their suburban empire.

Until a pilfered bag of sex toys brought it all crashing down.

Jimmy the King is the story of the rise, reign, and paranoiac fall of a corrupt cop and his regime—a crime family with badges and guaranteed pensions.

Tom Spota always maintained that he was just a prosecutor at heart, and not at all a political animal. But he spent nearly all of Catterson’s three-term reign up to that point situating himself as the perfect challenger.

When “The Cat” swiped at his own homicide bull supporter James McCready for the bar beating, Spota had been there to defend him and get an emphatic acquittal. Catterson then took even more direct aim at the police establishment, charging a Suffolk sergeant with helping hundreds of others cheat their way on to the force by gaming civil service exams. Spota’s law partner, a former police lieutenant, was also indicted for allegedly helping the sergeant cover it up, charges that were ultimately dismissed. The growing belief among cops was that Catterson was out of control, and Spota was in agreement. He said he regretted his initial support of Catterson. “I worked day and night to help him,” Spota said. “I thought he’d be a great district attorney. And unfortunately, that didn’t occur.”

By 1997, Spota was being groomed as a challenger to Catterson. He was eager to run, but there was a snag: Spota, like Catterson, was a Republican. Spota would have to switch parties, and Democrats were reluctant to nominate him.

But Catterson had a way of motivating his opponents. He charged five officials in the Democrat-controlled town of Babylon with white-collar offenses, in what seemed to many like a purely political prosecution. Then a squabble between GOP top dogs over the glory for rescuing a kidnapped girl may have led to a courtroom spectacle in which Catterson was again pitted against Spota. Catterson and Suffolk County Sheriff Patrick Mahoney were said to have beefed over who would get to hold a press conference with kidnapping victim Katie Beers. The feud grew from there, and Catterson ultimately indicted Mahoney and his undersheriff, Eddie Morris, on dozens of criminal counts including using the jail as an illegal campaign headquarters.

Spota was once again on the other side. He represented Morris, who happened to be one of his best friends. By the time the case was in pretrial proceedings in 2001, Spota had been announced as the Democratic challenger to the DA prosecuting his client. The case felt more like an electoral spectacle than a criminal trial, a testament to how politics seeped into every hinge of the Suffolk justice system.

Richard Schaffer, leader of the county Democratic Party, decided this time he wasn’t going to pass on Spota. Schaffer had been active in politics since he was a bucktoothed North Babylon ten-year-old, and had first run for office at age seventeen. His public-facing persona was that of an extremely dull and pleasant bureaucrat, a doughy fellow in a chunky sweater, who only reluctantly wielded the little power he had. But those who crossed Schaffer swore he was actually a coldblooded samurai in the art of crushing his enemies.

The five Babylon officials Catterson indicted all reported to town supervisor Schaffer, and the smart money would be on the DA trying to put him in cuffs as well. Unless, that is, Schaffer succeeded in engineering the replacement of Catterson. Schaffer calculated his best shot at unseating Catterson was to nominate the keeper of the cop vote who, as a bonus, could charm civilians with his high-drama resume as a prosecutor in the DeFeo and Pius cases.

Even so, Spota was an underdog. That a hardline, death penalty–supporting prosecutor was so willing to become a Democrat for political gain was sure to inspire skepticism in voters of every affiliation. In order to have a chance, Spota needed a perfect Hail Mary from Jimmy Burke.

MacKay was a dude in his thirties whose ponytail and earring gave away his real occupation, which involved scouting out the next passable punk band to come out of Lindenhurst. He was the owner of several hole-in-the-wall rock clubs such as Dr. Shay’s, popular with mohawked adolescents for its no-ID policy on certain afternoons.

But MacKay had stumbled into politics and found he loved the ruthless chess strategy of it. From there he had knifed his way up the org chart of a political party that embodied New York’s electoral nihilism.

It was called the Independence Party. The name was key to its sneaky success. The party was ideologically bereft. An untold number of its two hundred thousand members—a collective that would more than double in size over the next couple of decades—had registered accidentally. They meant to pick no party at all.

By 2000, MacKay’s leadership of this army that believed in nothing had made him a pivotal power broker. Notably, New York City Mayor Rudy Giuliani had invited him to Gracie Mansion so that he could lobby for MacKay’s endorsement in his abortive senatorial bid against Hillary Clinton.

MacKay was ruthless in exploiting a flawed electoral system. He and Schaffer knew that Spota’s greatest asset was the cops. And Spota’s best conduit to the cops was this rough-around-the-edges lieutenant with whom he developed an odd father-and-son relationship. Schaffer soon found himself chatting with Jimmy Burke more than Spota.

MacKay was loath to entrust the campaign’s success to Jimmy, whom he saw as a drunk and a lout. MacKay said he detected that even Spota sometimes doubted his protégé.

But for better or worse, there was nobody more enthusiastic or well-placed than Burke. The Spota campaign was like Burke’s very own episode of This Is Your Life, filled with characters dating back to his teenage years. The retired homicide bull Anthony Palumbo volunteered for the campaign, and Burke recruited his old partner Dennis Sullivan to join as well.

MacKay’s most Machiavellian ideas were implemented over eggs or bunless burgers, and so it was at the Peter Pan Diner in Bay Shore that he explained to a retired big league pitcher named Richard Neil Thompson that he wanted him to run for DA on the Conservative Party ticket.

Thompson and his wife looked back at him with stunned expressions. The guy had a 5.05 ERA over three seasons with the Indians and Expos, and his district attorney bona fides were even worse. He had been a lawyer for about five years, during which time he had worked as a baseball agent with no big league clients. He had never practiced criminal law.

But MacKay promised there’d be a pot of gold for Thompson if his plan worked. If Thompson could beat Catterson in the Conservative Party primary, it would rob the incumbent of having his name on the ballot under that line and cost him a vital chunk of votes in the general election.

“I thought that we could barely win but that we would win,” said MacKay, adding that the only reason he chose Thompson was because police were impressed by professional athletes: “We picked him out of a hat just because the cops liked him.”

MacKay gave Jimmy a new title—“the whip”—and assigned him to getting his fellow cops to hand over signed absentee ballots for Thompson, the former baseball player few, if anybody, in the county thought was qualified to be DA.

Burke insisting on absentee ballots for the primary contest, rather than trusting the cops to vote on Election Day, was essential to MacKay’s plan. Without forcing a collection of these ballots, the cops might not vote Thompson, or they might not vote at all. Burke relayed to MacKay that he was struggling to make headway with cops who were afraid to piss off Catterson. At the time, absentee ballots legally required an excuse, such as a conflicting work shift, for why the person couldn’t vote on Election Day. The cops expressed fear that Catterson might prosecute them for voting absentee in the primary when it turned out they didn’t have to. Burke exhorted, cajoled, and blustered his way over those fears.

Spota was a first-time political candidate at age sixty, and Trotta recalled that he was nervous about running a third-party operative to siphon off votes. “Is this electioneering?” Spota asked Burke, who assured him everybody did this.

Flagging down old ladies outside of a Waldbaum’s in Ronkonkoma, Spota flashed a younger man’s vigor for the election trail. His bumper stickers read: “Let’s Put the Cat Out.” He even won the endorsement of the leftist Green Party.

Newsday abandoned its decade-plus endorsement for Catterson in favor of Spota, who the paper’s editorial department lauded for his “reputation for meticulous preparation and skillful trial work. Spota has the professional skills for the job but without Catterson’s vitriol.” The New York Times also endorsed Spota, citing his “solid experience” and “fresh ideas.”

On the night of September 30, 2001, MacKay said he received a phone call. “You motherfucking genius!” squealed the voice, helium-high with excitement, on the other end. “Holy shit, you did it!”

Only when MacKay asked who it was did Spota identify himself: “It’s Tommy!”

Thompson won the Conservative Party primary by just over one hundred votes. The general election was far from over, but Spota, and those in his campaign, felt they now had it locked up. Spota was fixated on ascertaining Burke’s role in the coup. “Did he lift a fucking finger,” Spota asked MacKay, “or did he just sit and tell jokes and get drunk?”

MacKay assured Spota that Burke was integral to the whole effort. Not long afterward, Burke asked to meet MacKay near midnight at the twenty-four-hour Millennium Diner in Smithtown. Burke was late, and as MacKay waited for him in the parking lot, a green Grand Marquis swooped up so close that it almost hit him.

He was drunk off his ass, MacKay recalled, and after hopping out of his police-issued Mercury he immediately whipped out his dick and started pissing in the parking lot.

The guy was overjoyed, not just about the primary victory, but also about how MacKay had vouched for him when grilled by Spota. He made it clear that he was banking on Spota giving him a big job in the DA’s office.

“This is a big deal for me,” Burke said gratefully, putting his penis away and holding out the same hand for MacKay to shake. “I’m going to end up getting Rackets.”

This article has been excerpted from Jimmy the King: Murder, Vice, and the Reign of a Dirty Cop by Gus Garcia-Roberts. Copyright © 2022. Available from PublicAffairs, an imprint of Perseus Books, LLC, a subsidiary of Hachette Book Group, Inc.

Gus Garcia-Roberts is a sports-focused investigative reporter for The Washington Post. He previously worked on investigative teams for Newsday, the Los Angeles Times and USA Today. He was a member of the Newsday team that was a finalist for the 2014 Pulitzer Prize for Public Service for its series on hidden police misconduct on the eastern end of Long Island. He is the co-author of Blood Sport: Alex Rodriguez, Biogenesis, and the Quest to End Baseball's Steroid Era. He lives in Los Angeles. 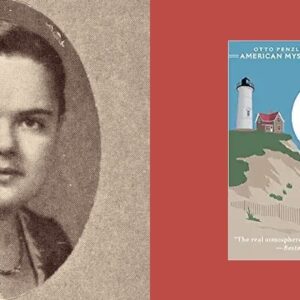 No one wrote more mysteries, nor more popular ones, nor better ones, set on Cape Cod than Phoebe Atwood Taylor (1909-1976),...
© LitHub
Back to top