For the column's centenary, Paul French visits the mecca of noir.

Crime and the City is a hundred! We’ve reached our centenary edition, and that means, after all this rehearsal and practice, this column might just be ready to finally tackle the behemoth, the colossus, the Mecca of crime cities. Where else but Los Angeles? There really isn’t a city in the world that has given us more fictional crime than LA. London, Paris and New York have all produced a plethora of smart PIs, troubled and hard-living cops, and gentlemen/lady consulting detectives for sure. But LA is supreme. Thanks to Hollywood the rest of us around the world think Freeways are largely for get-away chases, banks are really just there to be robbed, and that gunshots ricochet around the town all day long. The whole sprawling metropolis is just one mass of criminals, criminality and vice. As far as Crime and the City is concerned LA is the capo di tutti capi, the boss-of-bosses, and the Everest of crime writing. We need literary oxygen just approaching the city (and not just because of the smog).

And, of course, LA has some serious crime writing heritage….

Raymond Chandler could be a Crime and the City column all on his own. Any self-respecting crime fan should know the Marlowe novels inside out and back to front, though I am going to recommend The Annotated Big Sleep (2018), edited by Owen Hill, Pamela Jackson, and Anthony Rizzuto, which has hundreds of illuminating notes on LA history as well as many, many images of the city in its glory days alongside the amazing 1939 novel which is always worth a reread.

See, that’s the problem with LA, and why it’s taken a hundred columns to get up the courage to tackle this vast mess of human life and endeavour. James Ellroy could also easily be a whole column; Walter Mosley could quite simply fill the space; Michael Connelley too, several times over. Certainly, we can’t note LA crime writing and not mention Ellroy’s redefining of the city’s historical narrative, especially in the stand-out neo-noir L.A. Confidential (1990), and he’s not finished yet. Neither can we ignore Walter Mosley’s fifteen Easy Rawlins books with not a bad one among them. Nor is it possible to ignore Connelly’s Harry Bosch, Renée Ballard, or Mickey Haller, the Lincoln Lawyer. The LA-based federal prosecutor Bruce K. Riordan, recently on this very website, called Connelly the ‘shadow historian’ of the LAPD and of LA itself. They all are balladeers and interpreters of LA’s multiple crime histories across the city’s short, but action-packed, existence.

But, and I know they’ll excuse me, I’m going to gloss over them, because if you’ve come to this website and this column and the names Ellroy, Mosley or Connelly are new to you then, I respectfully suggest, you need to start your LA crime writing education somewhere else. And, while we want to get swiftly to the newer names in LA crime writing, we do  need to tip our hats to a few older classics that deserve our respect. If you haven’t then you need to read Ed Bunker (I’d suggest 1973’s No Beast So Fierce, an incredible portrait of the LA underworld as was). You should also dip into Ross Macdonald’s Lew Archer’s novels and, if it’s lacking in your SoCal education, you definitely need to read Chester Himes’s 1945 novel If He Hollers Let Him Go (not strictly a crime novel, but one detailing the violence, racism and resentments of the era). And then there’s Dorothy B. Hughes’s 1947 In a Lonely Place with a troubled WW2 airman coming home to LA, turning serial killer, and becoming involved in the hunt for himself while falling for actress Laurel Gray (I’ll excuse you class this once if you promise to catch Bogart and Gloria Graeme in the movie version).

The list goes on. I’d also add Elmore Leonard’s Get Shorty (1990) to the LA TBR pile – mobsters-turned-Hollywood producers (if you’ve ever met the latter you’ll know how easy that could be for the former), and a masterclass in Leonard’s trademark efficient style. Robert B. Parker had his detective-for-hire Spencer go to LA in A Savage Place (1981) digging into organized crime in Hollywood. Continuing the Spencer canon posthumously Ace Atkins has his redux Spencer return to LA in Angel Eyes (2019) trying to find a missing girl who went to Hollywood with dreams of stardom. Nobody dies in LA! Not Spencer, nor even Chandler/Marlowe, now resurrected by John Banville (and also soon to be a TV series with Liam Neeson as Marlowe) in The Black-Eyed Blonde (2014) and then Lawrence Osborne in Only to Sleep (2018). I could go on adding to the pile of classics…but…

If you’ve done your historical reading and ploughed through the Big Beasts listed above, then where next?

Steph Cha’s Juniper Song trilogy – Follow Her Home (2013), Beware Beware (2014) and Dead Soon Enough (2015) is where Chandler-style Californian hard-boiled snappiness meets a contemporary Korean American amateur sleuth. As a bonus Cha’s highly acclaimed standalone novel Your House Will Pay (2019) is a searing indictment of late twentieth and early twenty-first century society and its fractured communities. So much good LA writing (Himes to Ellroy, Mosley to Connelly and so many in between up to Cha and beyond) reveals the deep and stark racial and social fault lines of the city; fault lines that, like the tremors and quakes that beset the region and crack the freeways, have exploded into violence repeatedly. Your House Will Pay is a fascinating look at those divisions and sometimes seemingly unbridgeable social gaps as they played out during the riots of 1991 and then the social justice concerns of now.

Seventy-two suburbs in search of a city right? Dorothy Parker said it of LA, so it must be true. And so to the burbs – the Santa Monica Mountains, Calabasas, and the hard driving LA County Sheriff’s Department Deputy Eve Ronin are the turf Lee Goldberg has chosen for his new trilogy Lost Hills (2020), Bone Canyon (2021) and Gated Prey (2021). The trilogy will become a quartet in 2022 with a fourth Eve Ronin apparently. The books are absorbing and fast reads as the action and mystery keeps on coming. Another theme of LA crime writing recurs in the trilogy too – the intersection of celebrity and the movie business with criminality. Man, do movie folk get themselves in some serious hard roads of their own making!!

Yet another LA problem – too many rich people. The wealthy though are often the bread and butter of security consultant Allen Choice who gets his own trilogy courtesy of Leonard Chang (who, talking of LA crime, also writes for the TV show Snowfall). Korean American investigator Choice bounces between LA and the Bay Area in his investigations. The second book in the series Underkill (2003) is where LA mostly features, largely in the form of the city’s underworld of drugs and raves.

Juniper, Eve and Allen are all smart, but perhaps not as smart as Joe Ide’s Sherlockian Los Angeleno Isiah Quintabe. Ide’s Quintabe novels have become so much a part of the LA crime writing landscape so fast it’s strange to think that the first in the series, IQ, was only published in 2016. Since then we’ve had Righteous (2017), Wrecked (2018), Hi Five (2019) and most recently Smoke (2021). Isiah Quintabe (IQ geddit?) lives in East Long Beach and is contemporary LA’s answer to Sherlock Holmes and, like London’s great consulting detective, he can’t helping see the world and its inhabitants in his own unique way: ‘Things different or things not right or out of place or in place when they shouldn’t be or not in sync with the words that came with them.’ Or, as IQ’s wanna-be girlfriend Deronda thinks, he’s just, ‘a motherfucker with a freakishly large brain.’ And, genius he may be, but wealthy he ain’t, all too often being paid in a new set of tires or some homemade muffins.

The great thing about an Isiah Quintabe novel, and similar to a Conan Doyle tale, is that you don’t get just one story but rather one really big story surrounded by few dozen small and rather satisfying investigative anecdotes along the way. IQ moves about as the series progresses – East Long Beach to anonymity in a Northern California town – but never seems to shake off his adversaries – arms dealers, triads, drug kingpins, and there’s that old grudge with an Oxford-educated, kinda-Moriarty-like gangster too.

Michael Connelly once said, ‘Everybody in LA keeps a bag packed. Just in case.’ I believe that to be true and it perhaps gives the city a transitory edginess that reverberates through many LA crime novels. But let’s give the last word to Chandler, for who the city was muse, mistress, and his fortune. You can’t escape him. Chandler it was who really created LA crime writing – there were a few before and there’s been a hell of a lot since and all those who came later owe Chandler at least a smidgeon of debt. Chandler on LA? Just a bunch of ‘tough-looking palm trees and crooked cops’, or as he put it in his fifth Marlowe novel, the criminally underrated The Little Sister (1949), ‘I smelled Los Angeles before I got to it. It smelled stale and old like a living-room that had been closed too long. But the colored lights fooled you.’

Crime and the City – a hundred years young! 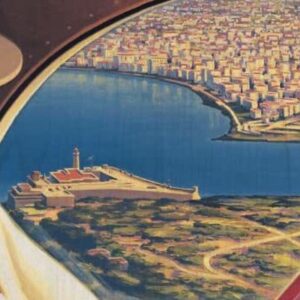 The series started as an idea by Lisa Levy who over the years, in various commissioning personas, had asked me to review...
© LitHub
Back to top