Lying Is Fundamental to Who We Are as Humans

Dishonesty and deception are bred into our DNA. The ones among us who can actually detect the lies are known as "truth wizards."

On any given day we each tell between ten and 200 lies. I’m talking about the ordinary everyday half-truths that help us get along with family, friends and people we meet.

How often you said these things?

‘I love your new hairstyle.’

‘It must have gone to my spam folder.’

‘I’ll call you right back.’

‘I bought it on special.’

‘You haven’t changed a bit.’

‘I don’t want the last biscuit, you have it.’

We lie all the time. We lie to our children, to our parents, to our partners. We lie to bosses and colleagues and complete strangers.

Here are some more facts for you:

Lying is fundamental to our lives and without it, none of us would maintain a relationship, or keep a friendship, or survive in a family or a community. Lying achieves a number of things. It can get us out of awkward situations, or spare the feelings of others, or enhance our social standing, or keep us out of trouble. It can even save our lives.

Evolutionary psychologists believe that lying is bred into our DNA. Tens of thousands of years ago, in times of famine, anyone caught stealing food would be cast out of the community, or ostracized. But if a person would steal food and lie successfully, they were more likely to survive and pass on their lying genes to future generations.

Don’t believe me? Consider this. Babies learn to fake cry before they’re a year old. By the age of one, they have learned concealment. By two, they can bluff. By four they are using flattery. By five their lies have become so outrageous they realize that they have to tone them down or nobody will believe them. And by the age of nine, they are masters of the cover-up.

Babies learn to fake cry before they’re a year old. By the age of one, they have learned concealment. By two, they can bluff…And by the age of nine, they are masters of the cover-up.

My fascination with lying can be traced back to 1985 when I read The Man Who Mistook His Wife For a Hat by Oliver Sacks. The famous neurologist told the story of passing through a hospital aphasia ward and hearing the patients roaring with laughter. When he investigated, he discovered they were watching President Ronald Reagan giving an impassioned speech on TV. These patients had no idea what President Reagan was talking about, but they knew he was lying.

Victims of global aphasia struggle to understand the meaning of words, but remain extraordinarily sensitive to tone of voice, body language, and the thousands of tiny tics and gestures that we all have. They are like human lie detectors, with no understanding of the context or content of what’s being said.

Oliver Sacks led me to the work of Professor Paul Ekman, a Californian psychologist, who is regarded as the world’s leading authority on lying. Ekman’s studies on face-reading and the discovery of micro-expressions were ground-breaking and he and his colleague Maureen O’Sullivan, set up the Wizards Project at the University of California. The aim was to identify people who could detect lies, who they called ‘Truth Wizards.’ The project was originally named the Diogenes Project after the Greek Philosopher who would look into people’s faces using a lamp, searching for ‘an honest man.’

A “Truth Wizard” was defined as a person who could identify deception with accuracy of at least 80 per cent, whereas the average person rates around fifty percent, which is no better than tossing a coin.

Years later, when I began writing crime fiction, I wondered if it might be possible to create a character who could tell someone was lying. On paper it seemed like a brilliant idea, but it created a unique problem for a mystery writer. Crime novels involve solving puzzles and sorting out lies and dismissing red herrings. Having a Truth Wizard as a main character risked creating the shortest crime novel in history.

I tossed the idea around for years, before I came up with the answer. The result is Evie Cormac, who is the most fascinating, infuriating, heart-breaking and captivating character I have ever written. Along with forensic psychologist, Cyrus Haven, Evie is the star of my new series, which began with Good Girl, Bad Girl and continues with When She Was Good.

Six years ago, Evie Cormac was discovered hiding in a secret room in the aftermath of a terrible crime. Half-starved and filthy, she refused to reveal her name, or her age, or where she came from. She didn’t appear in any missing persons file, and her DNA couldn’t be matched to an identity.  Evie is now in a children’s home, having been given a new name and birthdate.

Enter, forensic psychologist, Cyrus Haven, a man with his own tragic back story, who befriends Evie and discovers a girl unlike anyone he has ever met. Damaged, dysfunctional, aggressive, and self-loathing, Evie has the ability to tell someone is lying. She calls it a curse. He agrees.

Cyrus believes the only way Evie can be free of the past, is if he discovers her true identity, but everyone who has ever tried to help her has finished up dead. And ultimately, his search will trigger a tripwire that will leave Evie exposed after six years anonymity.

There is a moment in When She Was Good where Cyrus realises that Evie will never have a normal life because of her ability to recognize lies.

People usually lie for all the right reasons and with the best possible intentions—to keep families together and to protect relationships and hold on to our friends and make people happy. These are the good lies, not the bad ones.

Knowing all this, I try to imagine how it is for Evie, always recognising the deceit. Three little words like ‘I love you’ have enormous power in any relationship, but what if it’s a lie? It’s the same with ‘I’ve missed you’, or ‘I’ll never leave you’, or ‘you’re beautiful’.

This is why I fear for her; because I know she’ll never have a normal relationship, or a true friendship; or make small talk with a stranger; or strike a chord with someone new, because their every utterance, no matter how pleasant and innocent, will carry an extra significance when it reaches Evie’s ears. At that moment, she will know more than she ever wanted to or expected to.

People think they want the truth, but the opposite is true. Honesty is mean and rough and ugly, while lying can be kinder, softer and more humane. It’s not honesty that we want, but consideration and respect. 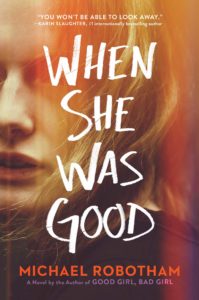 Michael Robotham is a former investigative journalist whose psychological thrillers have been translated into twenty-three languages. In 2015 he won the prestigious UK Gold Dagger for his novel Life or Death, which was also shortlisted for the 2016 Edgar Allan Poe Award for best novel. Michael has twice won a Ned Kelly Award for Australia's best crime novel for Lost in 2015 and Shatter in 2008. He has also twice been shortlisted for the CWA UK Steel Dagger in 2007 for The Night Ferry and 2008 with Shatter. He lives in Sydney with his wife and three daughters. His recent novels include The Secrets She Keeps and When She Was Good.

The End of Her 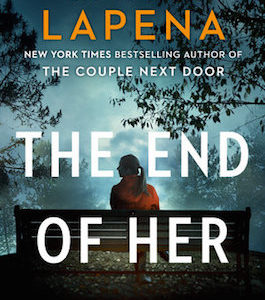 The End of Her

January 10, 2009 Creemore, Colorado The snow has fallen heavily, relentlessly, for two days now, and shows no sign...
© LitHub
Back to top