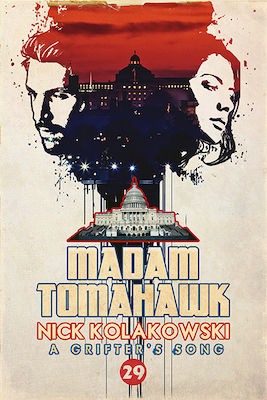 The following is an exclusive excerpt from Madam Tomahawk, by Nick Kolakowski. In this new installment of Kolakowski's A Grifter's Song series, Sam and Rachel are back and helping an old friend when they find themselves embroiled in a little blackmailing scheme with surprisingly national implications.

The humid air pulsed with music from a thousand open windows, the live bands in every bar fighting a sonic Ragnarök with the tunes blasting from the cars crawling the 18th Street drag, all of it smashing into a thunderhead of drums and bass you could hear from a half-mile away, beckoning the city’s drunks and partiers: head to Adams Morgan, where all your needs can be satisfied, and all your bad decisions will be washed away tomorrow morning along with the crushed beer cans and half-eaten jumbo slices.

Adams Morgan, the loudest and drunkest neighborhood in Washington, D.C. A place you could still find a cheap drink and trouble. Inside the Brass Nut, one of the sketchiest bars on the drag (and that was saying something), Sam and Rachel downed beers and cracked peanuts and watched the crowd scream and sweat and drink. The overhead speakers pounded hip-hop, the rapper’s voice gravelly and low enough to vibrate the glasses in their hands.

In the pause between songs, Sam whispered into Rachel’s ear, “Check out the dude with the redhead.”

Rachel nodded and looked. Every detail about the blond kid at the far end of the bar screamed douchebag, from the gym-plumped biceps to the shiny wristwatch. His right hand gripped the elbow of a pretty woman with long red hair and dragon tattoos on her bare shoulders. The woman didn’t look happy.

“Something’s up here,” Rachel said. “What do you think? Bad date?”

The woman tried to move her arm and the douchebag gripped harder, yanking her close.

“Maybe,” Sam said. “Maybe something worse.” His every instinct said to not get involved in whatever was happening. They were trying to keep a low profile, coasting between jobs on a dwindling bankroll. If there was going to be trouble, he wanted to be the one inviting it, and for a profit.

“Yeah,” Rachel said, biting her lower lip, and he could tell she was thinking the same thing. They had a near-telepathic link, honed by hard years of living on the road. They wouldn’t have survived this long without it. “We can’t risk attention,” she said.

The next song started up, four quick drumbeats followed by an inhuman screech Sam thought was the vocal track until it climaxed in an electric crackling and the music cut off, the DJ in the corner pounding a fist against his equipment. At the far end of the bar, the woman tried pulling away again. The douchebag whispered something in her ear, followed by a smirk, and the woman stopped moving, her head slumping.

“I bet he’s got a lot of cash in that wallet,” Rachel offered.

“Cash he doesn’t deserve.” He pointed at her glass. “How much do you love that drink?”

“Good. Let’s improvise,” he said, taking the glass from her.

Beyond the bar, a narrow hallway led to a set of restrooms grimy enough to kill anything without a strong immune system. When they weren’t dancing, yelling, drinking, or trying to punch each other out, the upstanding patrons of the Brass Nut lined up to dump gallons of high-proof urine into the restrooms’ cracked toilets—and that line ended near the douchebag and the redhead. As Sam wove through the crowd, he began to stumble and slip, slapping a hand against the bar to steady himself.

Rachel grinned at the performance.

Reaching the line, Sam straightened—and tumbled to his left, spilling the last of Rachel’s drink on the douchebag’s expensive lime-green shirt. The douchebag shot from his stool, fists clenched, ready to pummel.

“Oh, so sorry,” Sam slurred, wiping his hands across the douchebag’s chest. “So sorry—I, ah, I had some shots, and my bladder, and…”

Rachel stood, glancing at the bartender. In dives like this, the bartender was often the first line of defense against a brawl, but this guy continued to shove shots across the bar and pretend nothing was happening to his left. She turned to the front door, but the swarming mass of partiers blocked the bouncer from a clean view of the brewing brawl.

“I’ll, ah, I’ll clean you up,” Sam said, plucking a wad of paper napkins from the bar, and wiped the douchebag’s shirt and pants, his hands darting everywhere. The redhead leaned aside, her hand over her mouth. Rachel hoped the woman was trying to hide a smile.

The douchebag tolerated the fumbling for two seconds before placing his hands on Sam’s shoulders and shoving hard, sending Sam into the line of people waiting for the bathroom.

“Fuck,” the douchebag snapped. “This is a three-hundred-dollar T-shirt, you understand, you shit? It’s Egyptian fucking cotton. You’re gonna fucking pay for this.”

“Said I was sorry,” Sam said, weaving on his feet. The crowd behind him retreated a few steps, expecting—hell, probably wanting—a fight.

Rachel slipped through the crowd. As she passed a table, she plucked an empty beer bottle by the neck and held it against her hip.

Instead of throwing a punch at Sam, the douchebag turned to three giant guys sitting at the bar. “I’m gonna hit the bathroom and clean up,” he said before jabbing a finger at the redhead. “Watch her. Make sure nobody talks to her.”

Oh shit, Rachel thought. This guy brought his friends. Why wasn’t he speaking to them before? Because he was busy torturing the girl, of course.

The douchebag disappeared down the hallway to the bathrooms. Over the amplified click-click of the DJ trying to bring his hardware back to life, a woman shouted, followed by the echoing slam of a door. The douchebag had decided to skip the line.

“You can talk to me,” a suddenly sober Sam told the redhead. “Are you okay? I want to make sure you’re okay.”

“Yo, shut your mouth,” said one of the guys, a plus-sized slab of beef with a crewcut. “Screw off.”

“You know what?” the redhead said, sliding off the stool. “I—I’m out of here, okay?”

One of the other giants grabbed her wrist. “You’re not going anywhere,” he said.

Rachel appeared in front of him. “Hey,” she said, and when the guy turned toward her, she hurled the empty beer bottle into his sandaled foot as hard as she could, crushing toes. The giant released the redhead and jumped backward, yelping in pain. Overhead, the speakers thumped as the DJ finally fixed his snafu, a sonic boom kicking off another hip-hop track, the crowd reactivating in spastic dance—

Rachel did a dance of her own. She pivoted on her hip, her elbow swinging around to connect with the giant’s throat. He stumbled against the bar, gagging, and she spun on the guy with the crewcut who’d told Sam to shut up. Crewcut raised his fists, ready to block a shot at his face, so she shifted tactics and drove a knee into his balls hard enough to end any chances of him reproducing. Two seconds had elapsed, the bartender and the crowd only starting to react to this burst of violence, and she shifted her stance again, ready to take on the third guy, but Sam was also in movement, delivering a quick right to the giant’s jaw, followed by a hard jab to the gut.

The third guy lost his balance against a stool and collapsed onto the sticky floor.

“We should probably go,” Rachel yelled into the redhead’s ear.

The three giants were down but not out, two of them already struggling to their knees. Rachel took the redhead’s elbow and guided her through the crowd, which parted as the bouncer barreled through, ready to lay down some hurt. “The guy who hit them, he’s in the bathroom,” Rachel shouted at him. “He’s wearing a green shirt. And he’s got a knife!”

They exited the Brass Nut, diving into the crowd on 18th Street. Sam stayed a few feet behind the women, covering the flanks. At the corner, Rachel directed them to the right, onto a quieter residential street. She paused for breath, flexing her aching hands.

“Thank you,” the redhead said. “I need to leave that asshole.”

“Sarah,” the redhead said, going for the handshake.

“Yeah, I can stay with a friend.” Sarah sighed. “Shit, but I had a bunch of my stuff at Steve’s place.”

“Yeah, ugh.” Sarah smacked her thigh. “Like, my laptop and a bunch of clothes and some books. I guess all my files are in the cloud, but the laptop was new and it’s like a thousand bucks…”

“I have just the thing to cure your ills,” Sam said, pulling a calfskin wallet from his back pocket. “I pickpocketed that asshole when I spilled that drink on him.” He tossed Sarah the wallet. “Feels like it’s got at least a couple hundred in cash in there. You could probably use the cards, too, but not on anything they can trace back to you. It’s a good start.”

“Thanks. Who are you guys?” Sarah stuffed the wallet in her hip pocket. “You really knew what you were doing back there.”

“We’re just two people trying to make our way in the world,” Rachel said, locking eyes with Sam. “Dearest, we should probably go.”

“You, too,” Sarah said, sounding happy. She leaned against a fence, her hands on her thighs, and breathed loudly through her nose as Rachel and Sam drifted away. Rachel understood what the girl was going through. Sometimes you needed a moment to let the stress and adrenaline flow from you, especially after combat.

“We did a good thing,” Sam said, directing them to the right, down another dim block of rowhouses, before taking another right, toward the light and noise of the strip.

Rachel checked her watch. “How long until we can go back to the house?”

“Rickie said midnight,” Sam chuckled. “I figured we’ll give her until the bars close. I don’t want to walk in on a client.”

Rickie was an old friend—a rare commodity for any grifter. She was a high-end call girl, the kind who cost thousands of dollars a night, and they had worked with her on a complicated con in Miami way back in the day. They’d stayed in touch ever since, with occasional emails that dodged any mention of business, and Rickie always said she had a guest room at her place in D.C. if they ever wanted to spend a few days playing tourist in the nation’s capital.

They stopped on the corner two blocks north of the Brass Nut. A police cruiser was double-parked in front of the bar, a uniformed cop chatting amiably with the bouncer on the sidewalk. The douchebag and one of his friends stood to one side, screaming into their phones. It seemed like an ordinary mess, forgotten by morning, which was good—if Rachel had hit one of those dudes too hard by accident, killed or crippled them, it might have triggered something more complicated.

Rachel’s phone buzzed in her pocket. “It’s Rickie,” she said, checking the screen.

“Client must have finished early.”

Rachel answered it. “What’s up, friend-o?”

“Come back,” Rickie said. Her voice quaked. “Come back to the house. I have a situation. I really need your help. Right now.” 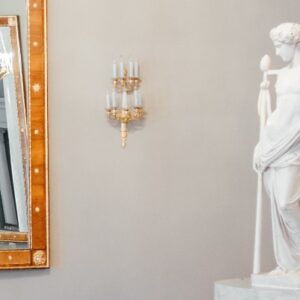 How Fine Art Has Become a Tool for the Bad Guys My introduction to the criminalization of fine art happened on a personal level.  And by “criminal” I mean the use of fine...
© LitHub
Back to top