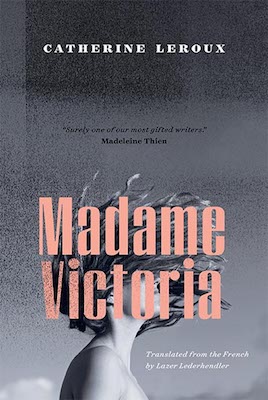 The following is an exclusive excerpt from Madame Victoria, a new work of metafiction and mystery by French Canadian writer Catherine Leroux, translated by Lazer Lederhendler. In the following passage, a caretaker for the elderly wonders about a mysterious corpse found on the grounds of the hospital where he works.

Germain Léon is not fond of the dead. Even though, in comparison with the living, the dead are not much trouble, especially those whose days are numbered, who teeter on the edge of the steep slope that will send them back to the inert matter from which they had emerged. On their deathbeds humans are big babies, incapable of the most basic actions, forced to turn to others—sometimes the love of their life, sometimes a stranger—for their essential needs. These ones Germain is able to love and to care for: wash their withered bodies in lukewarm water, soothe their lips with a sponge, change their bandages and diapers, adjust their pillows, inject with the drug that will make their pain tolerable, then imperceptible. When he does these things Germain is happy; he receives their sighs of relief like little puffs of humanity that make him the person he likes to be, the father he wants to go on being for his daughter.

And yet, while nothing else disgusts him, neither blood nor gangrene nor shit nor vomit, Germain can hardly bear the sight of a corpse. The moment a body has breathed its last, he can’t help recoiling to fight back the nausea. After that, like any nurse, he does what needs to be done, but with shivers of revulsion that he must quell on the way home, where his Clara is sitting at the table with her arithmetic exercise books.

Hence his astonishment at the skull. For two full minutes Germain stays frozen, hypnotized by the object that has ended up, God knows how, propped against a curbstone a few metres from his car in the parking lot. He contemplates the sutures that form meandering rivers between the bony plates, thinks of the most famous line in Western theatre, and he marvels at not feeling any fear, aversion, or impulse to bolt in face of this corpse—worse, this fragment of a corpse. For Germain, this represents a surprising new variation among the manifold feelings and impressions collected by people who work in close contact with life, death, and disease. Only the recently deceased disturb him; the ones so long dead that nothing remains but a skeleton leave him unaffected. “So I could go visit Pompeii,” he muses before rousing from his reverie.

And yet, while nothing else disgusts him, neither blood nor gangrene nor shit nor vomit, Germain can hardly bear the sight of a corpse.

The police set up a security perimeter around the wooded knoll overlooking the parking lot. Germain tries to see what is going on among the trees, powerless to move away from the skull lying there in the middle of the commotion. He would like to seize the poor dirt-smudged head, to press it to his chest and speak to it softly. He can’t explain why, but this bone is the saddest thing he has ever encountered in his twenty-year career. It’s almost the solstice, the daylight lingers, and Germain’s ears are full of the city’s noise, horns and sirens, construction machinery, festivals clamouring away: the grinding works of Montreal. Ordinarily, such sounds are muffled at the Royal Victoria, the hospital so snugly nestled in the fabric of the mountain. But tonight they are amplified, as if the whole city wants to signal the permanent state of emergency in which it lives, the rages, the races, the victories, all that keeps it from sleeping.

Two police come back down the knoll yelling something Germain can’t quite make out. They’re immediately surrounded by a dozen officers, who are soon joined by the onlookers thronged around the perimeter. Germain hangs back, anxious for no special reason. A female colleague steps out of the crowd and approaches him. “They’ve found the rest of the body. It has hospital clothes on.”

Along with the general public, Germain learns everything else from the newspapers. The skeleton discovered in the woods was two years old. No one has come forward to claim the remains. According to the hospital management, every member of the staff has been accounted for. For weeks, this is all people talk about. During their breaks, orderlies recall former patients who left their beds without telling anyone, and secretaries search through the files to verify their colleagues’ theories. Even the anaesthetists deign to put in their two cents worth.

As for Germain, despite being questioned four times a day, he is as clueless as the rest. But he is haunted by his memory of the skull, curses himself for having been so quick to alert the police, like a mother who let her child leave home without taking the time to hug her and whisper the loving words you need to go out into the world. The one they’ve dubbed Madame Victoria died alone, without the compassionate hands of someone like Germain to accompany her to the final threshold, with no one to mourn her passing. This was the immeasurable sadness he felt on discovering the skull. The weight of that absolute solitude.

The investigation has stalled. The case has been assigned to a forensic anthropologist and crime novel celebrity, who runs new tests on the skeleton and finds that Madame Victoria was a Caucasian women of about fifty suffering from osteoporosis and arthritis-ridden joints but showing no signs of a violent death. Although the conclusions don’t rule out murder by poisoning or strangulation, Germain is somewhat reassured. Maybe it was a peaceful death, after all. In the photos, he notices the body’s position when it was found, an arm hooked onto a branch, as if to break a fall. The picture, suggesting the woman’s final struggle, wrenches at his heart.

Article continues after advertisement
He has turned Madame Victoria into the repository of all his regrets, all the times he wasn’t equal to the task. A heavy burden to unload on a dead woman that didn’t know him.

But what upsets him most is Madame Victoria’s face. Based on the available data, experts were able to produce a rough portrait. Curly brown hair, high cheekbones, faded features, she seems to stare at him in disappointment, and Germain believes he recognizes her. Was she a patient resigned to never getting well again and whom he’d neglected? Was it his fault she’d gone out to die on the knoll? Had he inadvertently administered the wrong drug? At other times she reminds him of his mother growing old so far away; he doesn’t visit her often enough. After months of hoping, like the investigators, that someone would recognize her face, Germain forces himself to banish his gnawing guilt. He has turned Madame Victoria into the repository of all his regrets, all the times he wasn’t equal to the task. A heavy burden to unload on a dead woman that didn’t know him.

The years go by. Germain changes work units, his daughter enters high school and he does his best to help her across the muddy terrain of puberty. Madame Victoria has gradually faded from the collective memory and joined the army of ghosts occupying the hospital: elderly amnesiacs, drowned schizophrenics, mothers who died in childbirth. Germain alone still thinks of her every day, each time he goes back to his car at the end of a shift, but he is not sad. Now a guardian angel looks out from the little hill, gazes benevolently on the city that gave her a few green sticks of wood to protect her final moments. As for the skeleton lying in a cardboard coffin in the basement of a police station, it would have willingly accepted this box as its final resting place, but for a research team from the University of Ottawa.

More than ten years after Madame Victoria’s death, her hair is what interests the researchers this time around. Using new technologies, they manage to extract a slew of fresh information from the robust filaments that have remained intact. Once analyzed, each of the forty-three centimetres of fibre brings to light one month of the anonymous dead woman’s last years. What emerges is that Madame Victoria had moved seven times in the space of three years, going southward from the north of the province. In addition, she suffered from a mineral deficiency possibly symptomatic of a serious disease.

The information is shared and distributed throughout the country, but no one is able to identify her. For Germain, all the fuss and repeated failures do nothing but rub salt into the wound. He wishes they would leave Madame Victoria in peace now. After all, she may have wanted todie unobtrusively. Maybe she’d sought anonymity and solitude on purpose. And surely the whole circus over her bones must rankle her spirit longing for just a little silence so it can detach itself from this mountain pierced by such a heavy cross.

Then, as Germain looks out at the canopy of trees and the roofs that speckle Mount Royal, he thinks again. What she wants is for someone to speak her name.

All The Thrillers You Need To Read This November 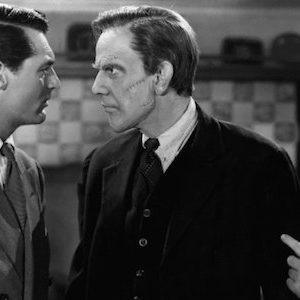 CrimeReads Brief: Week of November 11, 2018 "You're on a plane. You're on a train. You're wheeling through American space...Who are you going to read, in this...
© LitHub
Back to top