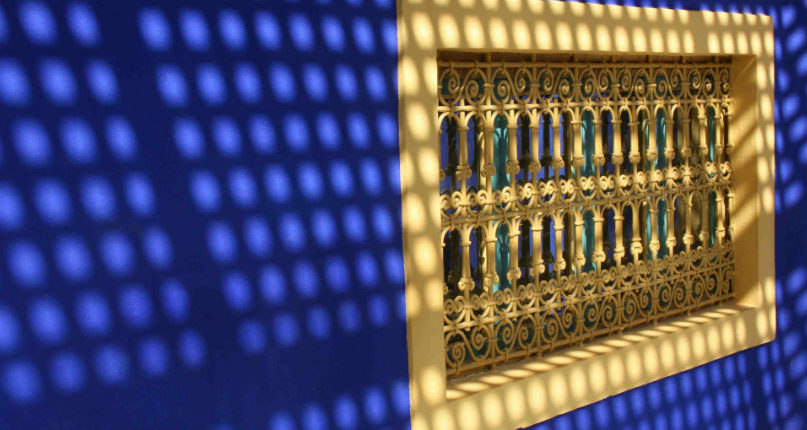 When  I agreed to edit Marrakech Noir, I didn’t realize that I had just stepped into a well-laid trap. Marrakech—al-Hamra, the Red City, as Moroccans call it—has been linked to the color red since the Almoravid ruler Yusuf Ibn Tashfin founded the city in 1062. How could I change its color today? And to black, of all colors! For the city is red, and the people of Marrakech pray night and day to protect it from darkness, despair, and moodiness.

No one but palm trees remember that remote past, when bandits hid behind their slender trunks, waiting to ambush passing caravans. Whenever the convoys of al-Massamida tribes reached the place now known as Marrakech, they would whisper morkosh to each other in muffled fear, which meant walk fast in their language. According to some stories, this is where the city’s name came from. But over the centuries the name has lost much of these dark connotations.

Moroccans today also call Marrakech “The Joyful City.” The city is pledged to joy in all its forms, and the inhabitants actively seek it out. The city’s days are bright and its nights are well-lit. Marrakechis are willing to read every type of story about the city—except those that are garbed in black. Even the storytellers of Jemaa el-Fnaa, the city’s leading narrators, have always avoided dark tales in their enchanting halqas.

I used to frequent Jemaa el-Fnaa as a child, and I enjoyed listening to Gnaoua music as I rushed past snake charmers. Monkeys never appealed to me, and neither did the dancers and singers, but I would sometimes linger to watch an uneven boxing match, like a flyweight pitted against a cruiserweight. Sometimes girls faced off against boys, and many times the boys suffered a resounding defeat. But only the storytellers truly captivated me—stories such as The Thousand and One Nights, al-Azaliya, al-Antariyah, and Hilaliya. As soon as I spotted the so-called Doctor of Pests, one of my favorite storytellers, staggering toward one of the square’s corners, I would drop everything and run to him. For me, he was the biggest star of the square. When he would disappear, I missed him. I knew that because of his addiction and his penchant for drinking in public he could be arrested at any time. When he would return, I would always ask him: “Where have you been, Doc?”

“I was in Hollanda,” the doctor would reply quietly, using the Arabic name for the Netherlands. Thanks to the doctor, Hollanda became a euphemism for prison. The doctor once vanished from his halqa for many months—and when he reappeared again, I welcomed him with the same eagerness. That time, he claimed he had been in America. “I was working for the American army,” he said.

“Don’t get me wrong. I don’t mean I was fighting beside them. God forbid! I was working with a special Moroccan delegation to prepare a salad for the American army,” he explained.

The doctor’s tall tale had attracted a great audience, all of whom hung onto his every word. The doctor told us that the American army was so big that they couldn’t find a bowl large enough to prepare the salad. So they drained a huge lake and dumped in truckloads of tomatoes, onions, and green peppers à la marocaine while fire trucks pumped gallons of olive oil into the mix. As for the salt, pepper, and cumin, helicopters sprinkled them onto the vegetables from above.

“And you, Doc? What was your part in this fantasy?” I asked.

The Doctor of Pests, the most famous entertainer in Jemaa el-Fnaa, told this outlandish story so he wouldn’t have to confess that he had been behind bars. His storytelling helped him block out the dark memories of the prison and its guards.

Marrakechis can invent colorful stories to avoid the darkness of reality. The doctor thought it was important to protect his tale, and to preserve the joyfulness of the Marrakechi soul. My task with assembling this book, however, was to search for adventurers who could dive into the grit without any qualms.

One prominent Marrakech author refused, saying, “When you need a story about Marrakech, you’ll find me at your service. I can write about the secrets of the city, its dreams, and its scandals—but not about its crimes.”

Maybe he’s right, I thought to myself. This city is prone to scandals, not crimes. The Marrakechis never tire of recounting scandals.

Maybe he’s right, I thought to myself. This city is prone to scandals, not crimes. The Marrakechis never tire of recounting scandals. They tell these stories with enthusiasm. They add a lot of spice to past events. But they quickly forget the dark stories, for the Marrakechi impulse is to always remain joyful.

Most of the writers I approached were eager to participate in principle, but they all asked: “Why darkness? Why crimes?” The questions are legitimate. Morocco has no tradition of noir literature. Under King Hassan II, defamation took the place of investigation, and fabrication took the place of interrogation. Moroccans had to wait for the death of the king, who ruled the country with an iron fist, to read the first detective story, “The Blind Whale” by Abdelilah Hamdouchi, one year after he passed. In this way, we are similar to our neighbors in Spain, where crime fiction didn’t proliferate in earnest until after the death of Spain’s dictator Francisco Franco in 1975.

In the last two decades, Moroccans have written no more than thirty detective stories. They are all novels—not one single collection of short stories among them. For that reason, I seemed to be seducing Marrakechi authors into some kind of virgin land, an untouched wilderness, which would be the ultimate challenge to tame. Some authors refused to participate because they didn’t want to intrude upon a literary genre that they didn’t know. Others tried but failed, while a third group succeeded.

The contributing authors took inspiration from old crimes that the city had kept hidden behind its ancient gates, as well as crimes that have happened more recently due to the changes Marrakech has experienced as it becomes a global tourist destination. Prostitution appears alongside arbitrary detention, violence, and terrorism. Poverty, corruption, and betrayal factor in too, as well as tales drawn from the dark reality of psychiatric hospitals.

Despite their variety, these stories remain rooted on Moroccan soil—allowing the contributing authors, writing in Arabic, French, and Dutch, to bring readers closer to the linguistic, cultural, religious, and ethnic reality of Marrakech, whether Arab, Amazigh, African, or Muslim, as well as its historic Mellah—the Jewish Quarter. Here is the capital of tourism, the city of joy and sadness, the city of simple living, the city linked to international capitals through daily flights, the city of the new European community, a winter resort for French retirees, and a refuge for immigrants from sub-Saharan Africa. Marrakech is also known for its sex tourism and a new generation of crimes. All of these aspects of the city are reflected in these stories, no matter how sordid. The authors haven’t written only stories, they have tried to write Marrakech as well. Together their stories present a comprehensive portrait of the city, its sadness, violence, tension, and darkness, without neglecting its joyful spirit.

Article continues after advertisement
Sooner or later, the reader finds him or herself at an intersection where dark storytelling crosses this square full of life…

The stories take us into the ancient city to wander through Dar el-Basha and Riad Zitoun, from Bab Doukkala to Bab Ghmat, from Derb Dabachi to Derb Sidi Bouloukat. We pass through the ancient walls of Marrakech to the new neighborhoods which have grown since independence. Some have turned into pockets of poverty, like Sidi Youssef Ben Ali, and others have become middle-class enclaves, like Hay el-Massira or Hay Saada. One of the stories even takes us to Amerchich, both the psychiatric hospital and the nearby neighborhood that shares its name.

The place that no one can avoid in Marrakech, however, is Jemaa el-Fnaa—which is present in most of the stories. Either the story starts in Jemaa el-Fnaa or it ends there. Sooner or later, the reader finds him or herself at an intersection where dark storytelling crosses this square full of life, which UNESCO has designated as part of humanity’s Intangible Cultural Heritage.

Jemaa el-Fnaa is a reliable source of joy—the square is a gathering place for singers and dancers, storytellers and charlatans, buffoons and dream snatchers, monkeys and snake charmers, fortune-tellers and women with henna-stained hands. Every evening the square transforms into the biggest open restaurant in the Arab world. Who would dare to follow these dark elements in the middle of such a joyous place? This, then, is what has made Marrakech Noir such a challenge for an editor, and for all the contributors as well. I will leave it for the reader to decide if we have succeeded. 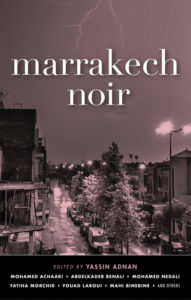 Excerpted from the introduction to Marrakech Noir, edited by Yassin Adnan. Copyright © 2018.

Yassin Adnan was born in 1970 in Safi, Morocco, but grew up in Marrakech, where he still lives. He is best known for his weekly cultural program Masharif on Moroccan television. He has published four collections of poetry and four books of short stories, along with a nonfiction volume entitled Marrakech: Open Secrets, with Saad Sarhane. His novel Hot Maroc, which takes place in Marrakech, was nominated for the International Prize for Arabic Fiction. He is the editor of Marrakech Noir. 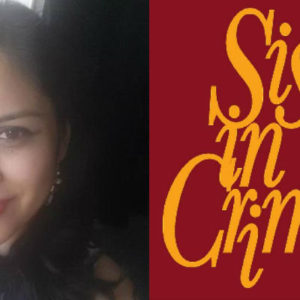 If this is the first you’re hearing of Mia P. Manansala, it won’t likely be the last. Earlier today, the up-and-coming...
© LitHub
Back to top