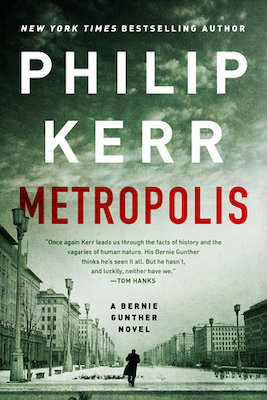 The following is an exclusive excerpt from Metropolis, published posthumously after Philip Kerr’s untimely death in 2018. Sardonic Bernie Gunther is in his earliest days on the job as a detective for Berlin's murder commission, searching for a killer among the underground gangs, and surviving a brutal and unforgiving summer in a city edging toward Hitler’s reign.

Mathilde Luz was a good-looking girl all right and still wearing the clothes she’d been murdered in: the hat, the coat, and the dress all from C&A, but no less becoming for that. There are some girls who manage to wear cheap fashion and make it look good and Mathilde Luz was one of those. The police report noted her perfume was 4711, worn in the kind of quantity that made you think it served to disguise rather than allure. The report also stated she was dark, with large brown eyes and lips the same red as her nail varnish. Her face was powdered dead white; at least I thought it was powder. It might have been that way just because she was dead.

“I made incandescent mantles at the German Incandescent Light Company for two years,” I heard her saying. “Liked it, too. I had some good friends there. The wages weren’t much, but with my husband Franz’s wage—he works at the Julius Pintsch factory, making gas meters for a living—we had just about enough to keep a roof over our heads. It wasn’t much of a roof, it’s fair to say. We lived on Koppenstrasse in a one-room apartment, if you can call it that—slum more like. It’s a poor area, as you probably know. There were two butter riots there in 1915. Can you imagine Berlin without any butter? Unthinkable. I remember them well. I guess at the time I must have been about fourteen.”

“Which made you twenty-seven at the time of your unfortunate death.”

“That’s right. Anyway, the landlord, Lansky, was a Jew like us, but he was never the kind to put his own tribe ahead of profit; if we hadn’t paid the rent on time the bailiff would have had us out double-quick. He always told us how lucky we were to have the place at all, but then he never had to live there himself. I know for a fact he lives in a nice apartment off Tauentzienstrasse. A real gonif, you know? Anyway, I got laid off just after Christmas last year. I looked for another, of course, but half the women in Berlin are looking for jobs now, so I knew that wasn’t ever going to happen. If I hadn’t been laid off, I wouldn’t ever have had to go on the sledge. With the rent due, it was Franz’s idea and I went along with it because it was better than taking a beating.”

“The shoes you were wearing. Style Salome, by Hellstern. Expensive.”

“Girl needs to look her best.”

“Where did you get them?”

“A friend stole them to order from Wertheim.”

“Some men like the secretarial type. Especially around that pitch north of Silesian Station. Makes them feel like you’re the girl next door, which gives them confidence.”

“It’s a stone’s throw from the Julius Pintsch factory, isn’t it?”

“That’s right. Sometimes my darling husband worked a late shift and came and found me just to take what I’d earned so he could go and buy himself a beer or two. Franz was thoughtful that way. He told me he was looking out for me, like a proper Alphonse, but I knew different.

“Of course it was dangerous. I knew that, too. We all did. Everyone remembers Carl Grossmann. He killed God only knows how many women in the very same part of Berlin. When was that?”

“They say he ate his victims.”

“No, that was Haarmann. Grossmann merely chopped his victims up after he’d killed them. Usually in his apartment on Lange Strasse. But you’re right. It’s not far from where you were killed.”

“Bastards. If you ask me, all men are bastards.”

“Bastards. If you ask me, all men are bastards.”

“You, too, probably. Bulls are just as bad as all the others. Worse. You’re all taking stocking money or shoveling snow, pretending you hold the law in respect. But sometimes you’re worse than anyone. Who was that cop bastard at the Alex who was killing women a few years ago? The one they let off with a smack on the wrist?”

“Yes. But I wouldn’t exactly say they let him off.”

“True, but he’s in a mental asylum now. And likely to stay there for the rest of his natural life. As a matter of fact I went to visit him a couple of months ago.”

“That must have been very nice for you both. They say he put it on for the trial judge. The loony act. He knew how to work the system and the court bought it.”

“That may be right. I don’t know. I didn’t attend the trial myself. But let’s get back to what happened to you, Mathilde. Tell me about the evening you were murdered. And I’m sorry for what happened.”

“I spent the early evening in the Hackebär. That was common. Lots of chontes like me would drink a couple of glasses of courage before we went out looking for a client.”

“There were traces of cocaine in your system, too.”

“Sure, why not? Puts a bit of spring in your step. Helps you when you’re coming onto a likely-looking Fritz. It even helps you enjoy it, you know. When they actually fuck you. And it’s not like the stuff is hard to get or particularly expensive. The sausage vendor in front of the Silesian Station is usually good for a toot.”

“You probably asked him at the wrong time. When all he had was salt and pepper.”

“A couple of us girls went to the Rose Theater and maybe the Zur Möwe.”

“The dance hall. On Frankfurter.”

“Right. It’s a bit old-fashioned, but there are usually plenty of men looking for it. Mostly men like Franz, it has to be said. Someone saw me leave with a man, but I can’t tell you anything at all about him for obvious reasons. Things start to get a little bit fuzzy. Somewhere on Andreasplatz there’s a fountain with a statue of a Fritz holding a hammer.”

Article continues after advertisement
“[L]et’s get back to what happened to you, Mathilde. Tell me about the evening you were murdered. And I’m sorry for what happened.”

“A witness says he saw a man washing his hands in that fountain about ten or fifteen minutes after we think you must have been murdered.”

“It figures. Anyway, I reckon that’s what killed me. A hammer like that one. I felt a heavy blow on the back of my neck.”

“That’s what killed you, Mathilde. Your murderer broke your neck with one blow.”

“After that. Nothing. The big blank. Over to you, copper.”

“And then he scalped you.”

“Shame. I always had nice hair. You ask Franz. He used to brush it for me when he was feeling sweet. I found it very relaxing after a night on my back. Like someone really cared for me as a person, and not just a bit of mouse.”

“He told us that. But it struck my bosses as a bit strange. Not many men would brush their wives’ hair. It’s like he was perhaps abnormally interested in a woman’s hair.”

“Nothing abnormal about it. He could see I was tired and wanted to do something for me. Something nice. Something that would help me to relax.”

“Let’s talk about Franz. We interviewed him several times. Mostly on account of the fact that you and he were reported to have had several violent arguments.”

“It was Koppenstrasse, right? Not a suite at the Adlon Hotel. Everyone argues in a dump like that. Show me a couple who lives there who doesn’t have violent arguments.”

“He has several convictions for assault. And he owns plenty of sharp knives. Knives sharp enough to have scalped someone easily.”

“He did a lot of woodworking. Made toys to sell for the Christmas markets. To bring in a bit of extra money. Wasn’t bad at it, either. But the night I was killed he had an alibi. He was working the night shift at Julius Pintsch.”

“It’s my job to break alibis. So he was close enough to sneak out of the factory for ten minutes, kill you, and then go back to work.”

“Kill his golden goose? I don’t think so. I was good at being a whore, copper. Franz may be a bastard, but he isn’t entirely stupid. And lots of his fellow workers—including the factory foreman—say they never had him out of their sight.”

“The police also found several novels by Karl May in your apartment. Including Winnetou. In fact, that was what persuaded the press to start calling your killer Winnetou.”

For some reason, I couldn’t bring myself to think of the murderer as the Silesian Station killer. I knew Gennat felt the same way and so long as Weiss wasn’t around he always called him Winnetou; everyone did, and I was no exception.

“I’m not much of a reader myself. But from what Franz told me, half the men in Germany have read those damn books.”

“You wouldn’t know much about that in a nice little room like this. Carpet on the floor. Curtains on the windows. Windows that you can see through. I gave Fritz a couple of smacks with a chair leg on occasion when he was properly out of line.”

“Look, Franz was a lot of things, my friend. But somewhere deep inside that barrel chest of his was a heart that loved me. That’s what kept us together. We quarreled, yes, but usually because he’d had a skinful. What Fritz doesn’t drink himself into a state on a Friday night and then knock his wife around for the hell of it? You wouldn’t know much about that in a nice little room like this. Carpet on the floor. Curtains on the windows. Windows that you can see through. I gave Fritz a couple of smacks with a chair leg on occasion when he was properly out of line. One time I even thought I’d killed him. But he has a head like a walnut and he came around after an hour or so, full of apologies for having kicked off. Didn’t even bear me a grudge. In fact, I’m pretty sure he didn’t even remember me hitting him. We made it up nicely that time.”

“Sure, why not? That’s romance, Berlin style. Let me tell you something, copper; it’s only when a man is lying insensible at your feet and you realize you could beat his head to a pulp with a chair leg if you wanted to that you really know if you love him or not.”

“Like I said before, I’m sorry for what happened to you. And I’ll do my very best to catch the man who did it. You have my word.”

“That’s very sweet of you, Herr Gunther. But to be honest, it really doesn’t matter to me now one way or the other.”

“Is there anything else you can tell me?”

“According to the lab report you were pregnant. Did you know?”

From METROPOLIS. Used with the permission of the publisher, Putnam. Copyright © 2019 by Philip Kerr. 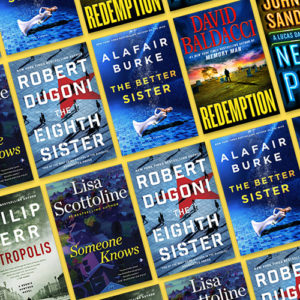 April's Best, Biggest Thrillers Spring has finally arrived, and with it comes a number of lights-out thrillers from some of the best authors in the genre. For...
© LitHub
Back to top