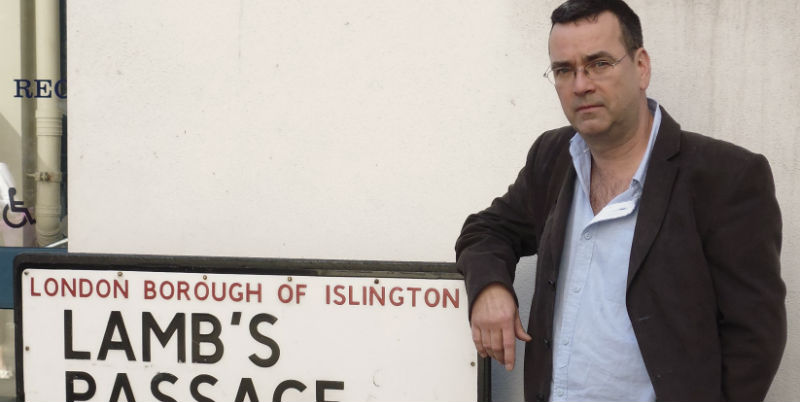 Mick Herron is a master of misdirection. It’s a skill, it just so happens, that spies and their handlers require in abundance, and one that Herron wields with unerring effectiveness in his thrillers. He’s also a master of dark humor—he’s won CrimeFest’s Last Laugh Award for best humorous crime novel not once but twice—and has a penchant for falling for his characters who, as he’s discovered, have a tendency to go off and do what they want. 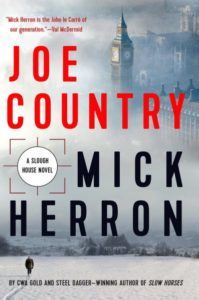 Herron’s been immersed in PIs and spies since his 2003 debut, Down Cemetery Road, in which restless Oxford housewife Sarah Tucker crosses paths with investigator Zoë Boehm, a friendship which, over four books, proves beneficial as well as life-threatening to both women. A desire to write about an ensemble of characters saw Herron penning 2010’s Slow Horses, not realizing he was kicking off an entirely new series. The eponymous characters make up a team of MI5 rejects: they’ve either messed up in one way or another—classified material left on a train here, losing a cache of weapons there—or someone more powerful simply wanted them out of the way. As a team, they work out of the shabby, rickety, central London Slough House, a carefully-crafted, paper-pushing hell specifically designed to cause them to lose the will to live and quit Her Majesty’s Service without litigation. Lording over them is MI5 legend Jackson Lamb, and trying to lord over him from their mothership-perch of the official Security Service building, are the manipulative spymasters Ingrid Tearney and Di Taverner, both of whom have a proclivity toward ordering others’ deaths, demises, and disappearances while coolly pointing fingers of blame elsewhere.

Of course, under Herron’s canny hand, Jackson’s slow horses see more action than their more legitimate colleagues, chasing after kidnappers, terrorists, and dirty politicians at the drop of a hat, all-too-often discovering that bad behavior begins close to home. In his latest, Joe Country, for example, the sixth Slough House outing, Herron melds a mad, badly done coverup of a posh party which itself had gone terribly awry – a combustible combination of arms dealers, sex, drugs, and a royal-family member—with a parallel plot drawn from the storyline of last year’s novella The Marylebone Drop, a tightly wound tale of old-school spook intrigue.

“I found that I couldn’t avoid addressing that,” says Herron. “I had thought that The Drop would be self-contained, but as soon as I introduced the new character of Lech [Wicinski—the latest reluctant Slough House arriviste, fresh off Drop’s action] into the book, I had to finish that story one way or the other. Because he wouldn’t just be sitting and waiting, he’d have to be doing something. It’s funny, when you start a novel you can have a certain idea in your head, but as soon as you start doing the extra work, all sorts of other things suddenly make themselves apparent: I couldn’t write about Lech without revisiting The Drop, so this book ended up with a lot more plot than I’d originally thought. But that’s all for the good, I think.”

Article continues after advertisement
“The more that politics come into these books, the more black humor there is: in 2019 that’s the only way.”

While he’s distracting readers with twisty plots, rogue mercenaries, and spooks in danger, Herron’s other sleight-of-hand involves lacing his narratives with comic turns, satiric quips, and savagely unfettered takes on the chaos, cynicism, and ridiculous figures of our times. (“I’ve read more convincing lies on the side of a bus,” says Lamb, witheringly referencing Brexit; “Except the Cold War didn’t really end,” he notes in another scene. “It just hid behind closed doors, like Trump in a tantrum.”) Akin to the characters in Christopher Brookmyre’s terrific comic-crime novels, as well as in TV shows like the BBC’s government-focused satire The Thick of It or W1A in its self-focused savaging, Herron’s protagonists poke serious fun at the status quo, cannibalizing its language to drive the point indelibly home. “That seems to me the natural way of telling this kind of story,” says Herron. “I mean, the more that politics come into these books, the more black humor there is: in 2019 that’s the only way—certainly in the UK and I suspect in America, too—the only way you can look at politics without going mad with despair.”

Another cultural touchstone that the Slough House series resonates with is Spooks, the TV series that was stoically un-averse to offing primary characters from time to time. That willingness to coax characters to life and then lose them to their job in the field gives Herron’s spy-thrillers their mensch-like soul: “That comes down to staying true to the characters I’m writing; I have to allow them the emotions that they would naturally feel in the circumstances that they’re in. I don’t allow the death of one of the main characters to just be never spoken of again because that’s not true to life, that’s not how people respond to loss and grief. I mean, obviously, at the end of the day they’re just marks on a page, but I think the degree of empathy I put in will be rewarded by reciprocity on the reader’s part. I don’t have a long-term plan, but I try to keep everything going so that the characters are always carrying their pasts forward.”

That commitment to maintaining momentum pays off in spades: In a terrific set piece in Joe Country, we get a clearer glimpse into the beating heart of Jackson Lamb than we’ve ever had before. “I rewrote that scene three or four times,” says Herron, “and every time I did so, I found more in it. I didn’t know when I started writing it what I was going to end up with, so it was quite an interesting experience. I’ve never quite had that same feeling when I’m working on something: normally I get to the end of the scene and I think, ‘Okay, that might need a bit of work but I’m more or less done.’ But every time I got to the end of this one, I thought, ‘I’m not happy with that, there’s something more to be found here and I reckon I need to go back and dig deeper.’ It felt really risky, but I’m happy with it. There’s normally a gap between what I end up with and what I’d hoped I’d end up with when I started—and the gap can be quite large sometimes—but not here.”

His literary discipline started early: Herron’s been a reader, he says, “from about the time I could walk. My mother taught me to read before I went to school, and I read everything I could get my hands on. Writing was the next step, I suppose, so I wrote lots of stories when I was young, and it just grew from there, really.” John le Carré and Len Deighton were spy-thriller inspirations, but Herron also consumed non-spook heavyweights such as Charles Dickens, John Steinbeck, Ernest Hemingway, F. Scott Fitzgerald, and John O’Hara. “I used the local libraries a lot and would get though enormous quantities of books; I think it’s more quantity than quality that matters when you’re learning, when you’re doing your apprenticeship. The more you read, the better: that’s when you learn the art of storytelling, and it all goes into the well that you’re drawing from for the rest of your life.” At college, he wrote more verse than prose. “I did that for several years—it was only when I kind of lost the ability to do that that I started writing novels. But poetry was great discipline for writing in general because it makes you think about every word, every syllable that you use.”

Herron spent 15 years working as a subeditor for a legal journal at Thompson Reuters—“it was specifically for lawyers, so fairly technical stuff”—but, since 2017, his fiction has his full-time focus, and the enjoyment it brings him is palpable. Herron paints his richly-detailed world like a pro, as when a character discusses a scarily realistic sounding, super-covert-style mission—no oversight whatsoever—called the Fugue Protocol. “Like just about everything else,” Herron says, “I made it up. I don’t know anything about how the secret service actually operates.” What about the secret-service data security levels named after Thunderbirds characters mentioned in 2015’s Real Tigers? “Oh, I definitely made that up.”

I could treat the world of spying just like any other world, where people are often doing quite dull jobs and working with other people who they don’t necessarily like…There’s no reason why the secret service should be immune to that.”

That world is Herron’s playground and he relishes the opportunities it offers, comprehending that the bigger an organization, the more dysfunctional it’s going to be. “The realization that the secret service is, in fact, a very large organization, that was perhaps a trigger for everything that followed: I could treat the world of spying just like any other world, where people are often doing quite dull jobs and working with other people who they don’t necessarily like, with a lot of office politics going on. There’s no reason why the secret service should be immune to that.”

He also clearly enjoys his characters, flaws, foibles, thwarted ambitions and all. Jackson Lamb is a Falstaffian character full of purposeful malapropisms and flatulence, forever tormenting his team of stir-crazy agents. If someone else harms them, however, he displays the cold and deadly ferocity of a mother hippo who’s been separated from her young. There’s also River Cartwright, a James Bond-wannabe, whose origin story emerges in 2017’s Spook Street, and Catherine Standish, recovering alcoholic, who has been with Lamb at Slough House from its earliest inception. There’s webhead Roderick Ho, anger-infused Shirley Dander, quietly loyal Louisa Guy, and, of course, the aforementioned Lech Wicinski. “The people came before anything else,” Herron says. “I wanted to write about a group of people and how they interacted with each other. I made them spies because that way I could make anything up. When I first started, I was just feeling my way, but, by the time I’d finished writing Slow Horses, I’d started to get a good idea of what it was that I wanted to do. Much of what I did in that book was sort of accidental, you know? It felt like a good idea at the time, but it wasn’t the basis for a series—I was simply writing that one book. It was only when I’d finished it that I thought, ‘Actually, there’s something here that I could continue.’”

And continue, he does, already at work on the next Slough House installment. “I’m just continuing where we left off,” says Herron, who recently completed a focused, six-week period of writing. “That,” he says of his uninterrupted work time, “is the best fun of all.” 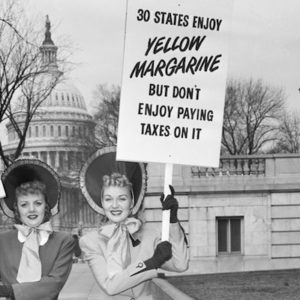 Margarine—the gateway condiment for food criminals—is one place where America’s rich tradition of food crimes truly...
© LitHub
Back to top