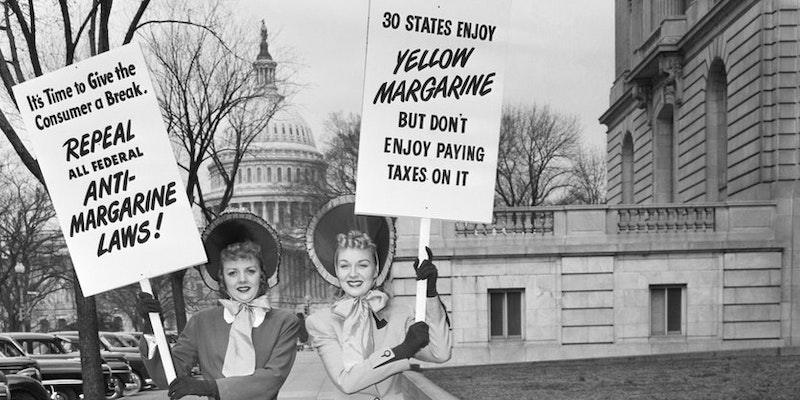 Margarine—the gateway condiment for food criminals—is one place where America’s rich tradition of food crimes truly began. Margarine prosecutions were some of the earliest examples of people being charged for conduct prohibited by agency regulations rather than criminal statutes alone.

In 1888, for example, a grand jury returned a criminal indictment against a Massachusetts margarine seller named George R. Eaton for selling margarine without keeping logs of his margarine sales. Congress had just passed its legislative masterpiece, “an act defining ‘butter,’” in which it gave the commissioner of internal revenue the authority to make rules governing the sale of butter and margarine. By statute, Congress broadly made it a crime for a margarine seller to fail “to do a thing required by law in the carrying on or conducting of his business.” Drunk with power, the commissioner issued a regulation requiring margarine sellers to keep a logbook of all margarine sales, including who the margarine was sold to and where it came from.

Like any good margarine dealer, however, George Eaton was no snitch. He didn’t think the feds had any business knowing who his margarine supplier was or who his buyers were, so he didn’t keep the required logbook (or at least he didn’t turn it over when the feds came knocking).

When he was indicted, Eaton moved to dismiss the charges on the grounds that he hadn’t committed a crime but merely a regulatory violation. His motion was denied, he was tried, and he was convicted. Eventually, Eaton’s appeal reached the Supreme Court, where the justices actually agreed with him. The court held that violating the margarine records rule couldn’t be a crime, even if the regulations did have the force of law. In the court’s words: “It does not follow that a thing required by [regulations] is a thing so required by law as to make the neglect to do the thing a criminal offense in a citizen, where a statute does not distinctly make the neglect in question a criminal offense.”

In other words, if Congress wanted the failure to keep margarine records to be a federal crime, it had to say so clearly.

Eaton wasn’t alone. In 1896, another margarine dealer was convicted of violating federal margarine law. The government charged Israel C. Kollock with selling half-pound containers of margarine without putting his name and address on the containers and without printing the quantity of margarine in “letters not less than one-quarter of an inch square” as required by regulation. In other words, he was charged with not using an eighteen-point font.

Kollock, like Eaton before him, moved to dismiss his indictment on the ground that Congress couldn’t constitutionally give an executive branch official the power to make federal crimes. This time, however, the Supreme Court didn’t buy the argument.

The court was of the view that Congress had properly made it a crime by statute to sell packages of margarine if they didn’t have the “marks and characters” required by law. The commissioner’s authority to specify which marks and characters were required, however, was “merely in the discharge of an administrative function” and properly delegated to him. Put simply, Kollock could be convicted for selling improperly labeled margarine because the regulation just “filled in the details” of what Congress had already made a crime. Thus, Kollock became one of America’s earliest margarine criminals.

Even without federal butter control, things were already bad enough for margarine dealers under state law. In 1898 an agent of Swift & Company named Collins was charged and convicted in New Hampshire for selling margarine that wasn’t pink. Yes, selling non-pink margarine was once a crime in the Live Free or Die state and people could actually be locked up for it. The law required margarine to be dyed pink if it was being sold as a substitute for butter, which is sort of margarine’s whole thing.

The case was Collins v. State of New Hampshire, and the defendant had the gall to sell margarine that was the same color as butter. Never shying away from a good margarine case, the U.S. Supreme Court agreed to hear Collins’s appeal. In a 7–2 decision, the justices concluded that the plain purpose of the pink margarine law was to make would-be consumers feel a “repugnance up to the point of a positive and absolute refusal to purchase the article at any price.” They struck down the pink margarine law as unconstitutional and, from that point forward, lawmakers could no longer require that margarine be pink. More importantly, selling butter-colored margarine was no longer a ticket to prison.

The decision in Collins represented one of the parting shots in a dark part of American history. Excessive taxes on margarine, smear campaigns by Big Butter, and hard-fought lobbying efforts to preserve butter’s place on America’s toast may now seem like a distant memory. But neither the Supreme Court nor Congress ever truly closed the door on federal margarine crimes.

Even after the Supreme Court decided Collins, Eaton, and Kollock, debate in Congress continued to rage. In 1901, a man named Rathbone Gardner stormed down to Washington on behalf of a Rhode Island margarine maker to testify before the House of Representatives. Gardner railed against onerous margarine regulations and even called out the injustice of pink margarine laws. He testified that the purpose behind the law was clear, since “it is absolutely certain that no man would spread upon his bread any pink substance.” Mostly, however, margarine makers were mad about the oppressive federal tax imposed on margarine. They felt it was nothing more than an effort to make all margarine purchases cost prohibitive and a further attempt to wipe butter alternatives out of existence. Still, Gardner really seemed to have a pretty serious machismo problem when it came to pink condiments.

Although the federal tax on margarine was finally repealed in the 1940s, federal law is still full of provisions with a clear anti-margarine bias. Under 21 U.S.C. § 347(c), it’s a federal crime to serve margarine in a public eating place unless it’s either conspicuously labeled as margarine or each serving is “triangular in shape.” A number of states have their own triangular margarine laws. In fact, in 1952 a restaurant owner named Joseph Trewasky was arrested in Hartford, Connecticut, for serving square pats of margarine to his customers. He’d reportedly already been warned once to cut them into triangles.

Section 347(e) even goes so far as to specify just how yellow “colored margarine” is. Specifically, it’s “more than one and six-tenths degrees of yellow, or of yellow and red collectively, but with an excess of yellow over red, measured in terms of Lovibond tintometer scale or its equivalent.”

Title 21, Section 347(b)(1), of the United States Code prohibits selling, or offering for sale, colored margarine “unless . . . such oleomargarine or margarine is packaged.” Doing so requires little more than a pair of hands and a generous wad of loose, unpackaged margarine. Violating Section 347(b)(1)’s packaging requirement constitutes a prohibited act under 21 U.S.C. § 331(m), which, under 21 U.S.C. § 333, is a federal crime punishable by up to a year in prison.

Even for an offender who does package his margarine like a civilized human being, there are still a number of other ways to earn a margarine conviction. As Israel Kollock learned in the 1890s, the federal government has long felt very strongly about labeling containers of margarine, right down to font size. 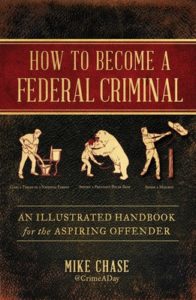 Excerpted from How to Become a Federal Criminal: An Illustrated Handbook for the Aspiring Offender, by Mike Chase, published by Atria Books (2019).

By day, Mike Chase is a white collar criminal defense lawyer. By night, he’s the legal humorist behind the @CrimeADay Twitter feed, where he offers a daily dose of his extensive research into the curious, intriguing, and often amusing history of America’s expansive criminal laws. Mike’s work has made him the go-to commentator on the countless weird and esoteric federal criminal laws buried deep in the books: he’s been a featured guest on American Public Media’s The Uncertain Hour, published in The Wall Street Journal, and more. 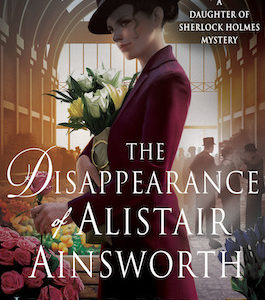 We did not make good time, for traffic was heavy and sections of the streets remained flooded with last evening’s torrential...
© LitHub
Back to top