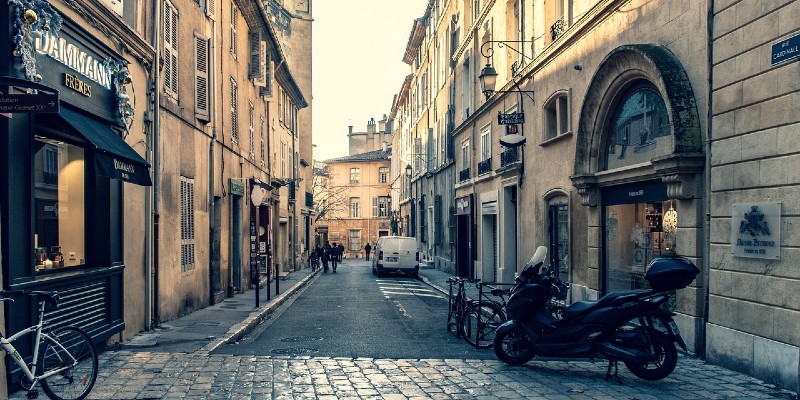 M.L. Longworth on the locations and memories that have helped bring her long-running Aix mysteries to life.

When we moved to Aix-en-Provence in 1997 it was a sleepy provincial town. You could park your car on the Cours Mirabeau, which at that time still had some mom-and-pop shops. Nowadays, only international chain stores can afford the rent on one of France’s most beloved main streets, and the obligatory underground parking garages can be full by noon. Peter Mayle’s A Year in Provence was only eight years old (I devoured it on the plane moving here), and Occitane didn’t yet have a shop on the rue Espariat, nor in airports around the world or in downtown Dubai and Tokyo and Helsinki. 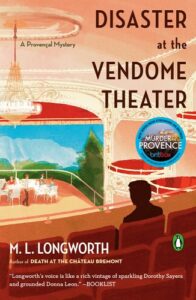 As a writer I find it completely normal to be inspired by the place where you live, and despite its growth Aix remains an inspiration. These are some of the spots that I frequent, that have worked their way into my novels, and that touch me dearly:

The faded and elegant Les Deux Garçons, with mirrored walls lined in gilt, has been a café since 1792. Cézanne and his best friend, Emile Zola, were regulars, and the café with its over-priced restaurant was visited by Churchill, Picasso, Edith Pïaf and Catherine Deneuve. Newcomers to Aix inevitably drift to Les 2 G’s, as I did, where I’d sit on the terrace and imagine the food and travel writer MFK Fisher there in 1960, chatting with her girls after they got out of school at Ste-Catherine de Sienne. She wrote, “The little girls drank lemonade and I beer in complete and sudden ease: we were in the right place at the right moment, and we knew it would last.” Sadly, a fire destroyed much of the café in 2019. Renovations have begun.

Down the street is Le Grillon (Le Mazarin in my books), where I began writing my first novel in the early mornings after dropping my own daughter off at Ste-Catherine. Mornings are best here, inside its elegant interior of ochre-painted patina walls and saw-dust covered tiled floor, under the hush of clients’ whispers and the thudding noise of the espresso machine. Local lawyers arrive before 8:30am and throw their black judicial robes over the backs of chairs before heading off to court. And one of the best things about breakfast at Le Grillon, despite the mediocre coffee, is that they serve buttery moist croissants from Béchard across the street. It’s the café where the characters in my books regularly meet. They call it “the office” as my friends in Aix do.

The best pastries in Aix are found at Béchard’s, and the best cheese at Savelli’s, both shops dear to the Aixois. Béchard’s, on the Cours, is an institution, as the queue that flows out of the shop and onto the street during certain fête times will testify. I love their springy brioches glacés for breakfast, and for dessert, the simple Chantilly-filled sponge cake Le Tropezien. My friend Philippe once found in his attic a receipt from Béchard for two brioches. It was handwritten, of course, and dated 1902. Cézanne himself could have been in the same queue as Philippe’s ancestor. On the other side of town, near the town hall, is the Fromagerie Savelli. Sylvie Savelli, a dark beauty, is a cheese affineur, meaning she ages her chevres, bleues, and tommes in three separate subterranean cellars beneath her shop. I never buy cheese at the supermarket anymore—it’s just never as flavorsome, or perfectly aged, as Sylvie’s—essentially, not worth the calories.

Philippe (the same) remembers his grandmother filling up jerry cans with the healing waters of the Quatre Dauphins fountain, then lugging them, no matter the weather, back to the family mansion on the south side of the Cours. There are 23 fountains in Aix, and each one has its own story, its own charm. The fountain Des Neufs Canons in the middle of the Cours was permanently damaged in 1944 by an Allied tank; its neighbor, the fountain d’Eau Chaude (La Moussue to locals, as it is covered in moss from which steam rises up in winter) was also once damaged, in this case by “young imbeciles drunk on wine.” That was further back, in 1670. The most photographed fountain must be the one in the Place des Augustins; it’s not a particularly old fountain, but the square, paved with small rounded river stones and lined with charming 17th century mansions, is one of the city’s most beautiful. Aix’s fountains all have stories; one has a curse. I used it in one of my novels, naturally.

Aix’s cathedral may not be the city’s prettiest church (that prize goes to the smaller Saint-Jean de Malte) but it’s the oldest, work having begun in 500AD on the site of the abandoned Roman forum. Slender red Roman bricks and tall columns from a temple were reused in building the Cathedral; the columns can still be seen in the baptistery, the bricks on the exterior façade. Saint-Sauveur also houses one of the city’s most tranquil spots: a 12th century cloister that is lined by twin sets of columns, each capital exquisitely carved with biblical stories. There’s a restored sculpture of Saint Peter that is almost identical to one found at Saint-Trophime in nearby Arles. Here the Saint, who holds the keys to heaven, is full of personality; his face, hair and short curly beard are finely carved; his robes a mass of crisp vertical pleats from the layers of fabric he wears. It is assumed that the talented 13th century sculptor travelled from parish to parish working freelance. He would have trudged up these same neighboring streets, narrow and twisting, that remain unchanged since the Middle Ages.

You know a real food aficionado in Aix if they talk about the market stall of Mme Martin. She doesn’t sell bananas or pineapples, only fruit and vegetables locally grown on her farm outside of Aix. She’s a reoccurring minor character in my books. Mme Martin can be found in the enormous thrice-weekly market located on the Place des Prêcheurs. There’s also a daily market, in fact smaller and more intimate, on the Places des Herbes. In spring one producer proudly displays mountains of asparagus, thin and fat, white and green; another, in fall, sets up stacks of wild mushrooms. A group of nuns sells a small selection of dainty floral bouquets and some vegetables, very good quality if over-priced. But I’m not going to argue or barter with them. At 1pm waiters in neighboring cafés hover until the square is cleared and cleaned, then quickly set up their tables and chairs.

At the turn of the century Paul Cézanne’s art was called, by an influential Aixois, « sale peinture » (dirty paintings), and the Musée Granet’s director vowed never to have Cézanne’s work exhibited in the museum. Aix thus missed out on owning a priceless collection. It’s a shock to think that Cézanne’s widow Hortense sold his work after his death at rock bottom prices so that she could have a bit of fun on the Côte d’Azur. Nevertheless, Cézanne’s spirit is felt all over town, and nowhere more than at his atelier. The dusty studio, located on a hill in the city’s north end, was left untouched after the artist’s death in 1906. The Provençal clay pots, colorful tablecloths, and stone cupids that starred in his revolutionary still-lifes fill the room; his hat and black coat hang in a corner. Up the street, wide stone steps lead through lavender and rosemary to a lookout with a view of Montagne Sainte-Victoire. From here Cézanne painted some of his one hundred-odd versions of the mountain, always feeling he never got it quite right.

Aix has one of France’s largest collections of oratories (92)—niches carved into street corners or façades that contain stone statues, sometimes accompanied by candles and flowers. Their purpose? To ask the saints’ intercession with God to prevent another deadly outbreak of the plague from entering the city. They were also reminders to say prayers, and possibly locations of blessings or even Mass. Most of the oratories contain the Virgin and Child; there’s a black virgin on the corner of the meter-wide rue Esquicho Coudre (Street of Squeezed Elbows), carved in 1663, and four statues of Saint-Roch, the patron saint in times of plague. Roch carries a staff and points to an open wound on his leg. A small dog sits before him; it’s the dog who nursed him back to health.

Aix’s main street, bordered by a double row of tall plane trees, was given its new name in 1876 to commemorate Count Mirabeau, who moved to Aix in 1772 after seducing a local noblewoman twenty years his junior despite his renowned ugliness (he had a deformed foot and over-sized head). Besides being an infamous ladies’ man, Mirabeau was also a politician, gifted orator, and writer who criticized the French monarchy but died young, at 42, while Louis XVI was still king. Before being paved in 1899, the Cours was dusty in summer and muddy in winter. Now, it’s best avoided on Tuesday and Thursday mornings, when market stalls selling polyester clothing made in Bangladesh fill its wide sidewalks. But it remains the pulse of Aix (you typically rendezvous with friends in front of Monoprix) and on September 11, 2001, it was there that I headed. I needed to be with my fellow Aixois, surrounded by the rhythm and beauty of the town. Cézanne wrote to a friend in 1896, “When I was in Aix, I thought I would be better off elsewhere. Now that I’m here, I regret Aix…when one is born here, that’s it, nothing else appeals.”

M.L. Longworth has lived full-time in Provence since 1997. She has written about the region for the Washington Post, the Times (UK), the Independent, and Bon Appétit magazine. She writes a mystery series, set in Aix-en-Provence, for Penguin USA: the tenth book, Disaster at the Vendôme Theatre, will be released in October of 2022. The books have been adapted by Britbox and ITV as a television series, Murder in Provence, starring Roger Allam and Nancy Carroll. 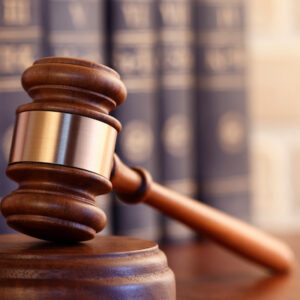 I was 20 when I first told another person I’d been sexually abused as a child. My confessor is a dear friend; after nearly...
© LitHub
Back to top