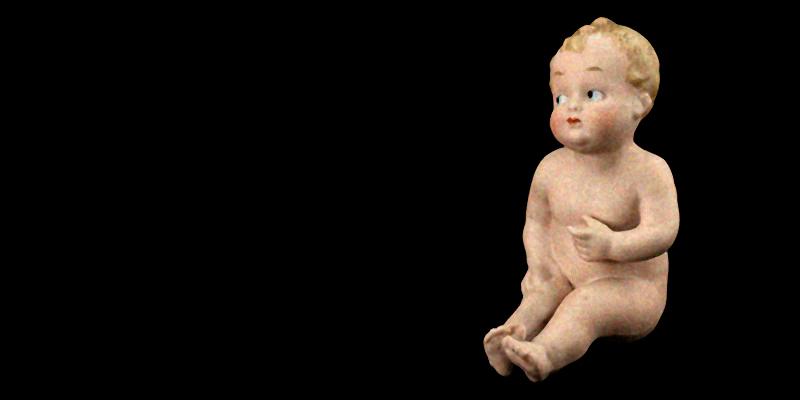 "[A]s long as childless women like me are...expressing a long-held dream of bringing a child—any child—to the American Girl flagship store...the cult will loom large."

I just realized I’m overdue in paying the very expensive storage fee for my frozen eggs—a fee I have committed to paying into perpetuity, I guess.

Five years ago, at age 33, I sat in front of my friend and former boss at a coffee shop and explained that I needed more money. “Why?” she asked, surprised. “Weren’t you just promoted?” I replied that yes, I was just promoted (to a just-over-mid five figure salary), but that being a single person in New York City was difficult, and “What if I want to be a single mother someday?!”

I am not sure why I became so preoccupied at that time in my life with the hypothetical scenario of being a single mother. I think I was less interested in the reality of it and more interested in having the ability to choose. I eventually achieved my goal of relative financial stability, and selling my new book, Just Like Mother, gave me the freedom to pursue fertility preservation. However, it’s very unlikely I could comfortably afford to be a single mother in New York City even now, and in fact my circumstances have changed dramatically in the last five years—I’m no longer single and I no longer live in the city, having relocated to the more affordable Hudson Valley region. But I think back on that conversation often because the truth of it is, nothing drove my commitment to improving my finances more than the idea that my fertility was swiftly expiring.

I have never felt any sort of strong maternal instinct. For a while I assumed many years of nannying had temporarily extinguished it, and that it would eventually reappear at some random time. (I loved the children I cared for but nannying in both Paris and New York painted a daunting picture of what was needed to juggle a career and a family in an expensive city.) But the fact was, my instinct wasn’t temporarily quelched—it had never existed at all. I’ve never felt opposed to children, but I’ve never particularly looked forward to them, either. They merely existed as a fact of my distant future, and as time went on the gap between present and future never really narrowed. They were always there, hovering roughly 5-7 years out of sight, even as I turned 33, 34, 35, 36….

…and just before my 37th birthday, my theoretical family went on ice. Typing that sentence invites shame, because the knowledge that my eggs are safely ensconced a cooler, sporting miniature sweaters (erm, that’s how I picture it) over at a lab over on the Upper West Side is an absurd privilege. Beyond the problematic aspects of paying to forestall the inevitable, by opting into “fertility preservation” (a palatable term!), I am complicit in something bigger and more sinister: the cult of motherhood.

Motherhood is a cult. I don’t expect this to be a popular opinion, but think about it: what drove me, a woman who has only ever felt ambivalence toward child-rearing, to fork over an ungodly sum and submit to weeks of self-injected hormones—all leading up to the grand finale of general anesthesia and an aching uterus—for something as intangible as “options”? Only to know I’ll have to spend more money down the line to potentially (with luck) achieve the pie-in-the-sky status of “mother”?

And don’t get me started on the implications of the financials and how unfair it is that a lot of people don’t have this option at all. So why do we—the “lucky” ones, at least—do it?

I have a theory, but first I want to take a look at the dictionary definition of “cult.” One of the Merriam-Webster entries reads, “great devotion to a person, idea, object, movement, or work.” By this definition, almost anything can be a cult, and to be honest I think a lot of things about society are mind-blowingly cultlike. This may sound obvious, but there’s a reason the word “culture” shares an origin with “cult.” As a writer/editor I like words, and as a former (middling) Latin nerd I am interested in derivations, so bear with me for a second.

At the root of both terms are the Latin “cultus” (noun: care, adoration) and “colere” (transitive verb: to cultivate). I don’t know this because I remember any Latin, by the way. I googled it. Anyway, I’m interested in the terms, “to cultivate” and “adoration.” From religious reverence of Mary, the mother of Jesus (she has no other notable identity) to the unconscionable cost of designer onesies, ours is a culture that cultivates an adoration of motherhood.

Okay, but how? Circling back to my theory, sustaining this culture relies on two factors: shame and a lack of questions.

Emotional manipulation is by far the most insidious and frightening aspect of this cult, the leaders of whom are all of us who buy into it and perpetuate it. The emphasis society places on cultivating a family unit as an inevitable next rung in the ladder of life is overwhelming. We’re conditioned basically from birth to opt in. It’s not a coincidence that baby dolls are arguably the most popular toy for anyone born with a uterus. We’re taught to mimic motherhood when our brains are still squishy and spongelike, and by the time our prefrontal cortexes and amygdalas sync up in our mid-twenties we might already be pregnant; if we aren’t, the inevitability of parenthood is by then deeply ingrained.

The result is a lot of fear, anxiety, and—yes—shame, if one’s life moves of its own accord, pursuing a different direction from the lives of the majority of one’s community.

Many aspects of my fertility preservation were uncomfortable, not least extreme water retention to the point where I was forced to walk stooped over under the weight of my bloat, like a lady Gollum. That was unpleasant, but the worst part was the unexpected emotional liability. When I was just barely out of anesthesia and dozing in a recovery room, the doctor whisked the privacy curtain aside to reveal my “number.”

“Yes! Great work!” she said, adding to a list of congratulatory feedback I’d received over the course of my two weeks—accolades I didn’t feel I deserved, given that all I was doing on my end to move things along was eat salty meat and drink water, as I’d been instructed. I love salty meat, so that hardly required effort.

Then the doctor moved to the person down the row from me, her form concealed by a few flimsy cotton panels. “You got thirty!” she declared. That woman promptly burst into tears, overwhelmed by relief. For my part, I was dismayed that we could hear one another’s “numbers.” What if my row-mate, with whom I felt an instant kinship, had been unhappy with her results? I would have felt awful about my own achievement! And in fact, egg-envy is common, as it turns out. Fertility can become a competitive sport, with women warring jealously over harvests. When I looked down at my phone while sitting there in recovery, I had at least one message from a prying friend wondering how many eggs I got. I know of women who have gone back and paid for additional, unnecessary, and costly rounds of retrieval to trump friends’ results.

That’s where the element of shame comes in. When motherhood becomes a value judgment, it changes us. When we are congratulated over elements of our biology over which we have zero control, it feels maddening. And we are all guilty of competing to some degree because reproduction feels like a lottery we’re judged by and must scramble to “win” despite our helplessness.

I am not suggesting there aren’t loads of people who genuinely want children and for whom it’s authentically fulfilling. The more benefits of having children are apparent. You’re guaranteed love and companionship, a legacy, and someone who will (with luck) visit you in old age and see you off to the other side. You’re given a cute small person to care for, hopefully better than you have historically cared for plants and goldfish, and shortly after they learn to talk, they’ll say hilarious things that bond you to them and make you wish you could keep them small forever despite tantrums and diapers. Plus, parenthood has the potential to change you for the better (so I hear). Who has time for petty gossip when one’s brain space is fully occupied by strategies for keeping a kid alive? In seriousness, there are few things in life that surprise us after a certain point, and I’d guess parenthood is one. That fact in itself is incredible, and the prospect of ushering a human into the world and shaping their personhood is breathtaking.

I could make an equally compelling argument for not having kids, and you can probably guess what that looks like. Money, time, tabled dreams, etc. How many of us sit down and truly ask ourselves what matters more?

If we don’t, it’s because we’re taught it’s shameful to question the system. It’s selfish to want careers and vacations or to pursue dreams that consume too much of our time. It’s inherently bad, we’re told, to prioritize short-term goals over potential long-term emotional gain. For that matter it’s bad to even think of it in terms of loss and gain, because how cold-hearted can you be? You’re bringing life into this world and that’s a noble pursuit that requires selflessness!

Even the most well-meaning people reinforce this schema. “Don’t worry,” a kind relative told me at a time when I was not worried. “There’s time yet!” My contentedness wasn’t enough while there was something missing, something I had yet to achieve. Enter a slight sense of unease. Should I be worried? I asked myself.

On the flip side, when I hang out with mom friends, I have a tendency to lean into my nannying years to feel a sense of belonging, despite my clear lack of knowledge and authority. “Oh, I love Magna-Tiles!” I heard myself exclaim at a recent gathering, relieved some aspect of my distant past was still relevant. I received tolerant smiles as my reward.

All of this is to say that I am the problem. We are the problem. I wasn’t aware that’s where this essay was going until now. But as long as childless women like me are fawning over Magna-Tiles and expressing a long-held dream of bringing a child—any child—to the American Girl flagship store (cue memory from wine-induced conversation just last night…dear god), the cult will loom large.

See you in two to four years after I greenlight the big thaw, Mothers. Congratulations to us all on our hard work. 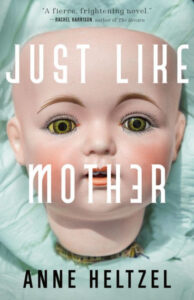 ANNE HELTZEL is a New York-based novelist and book editor. In addition to writing horror, she has penned several milder titles for children and young adults. Just Like Mother is her adult debut. 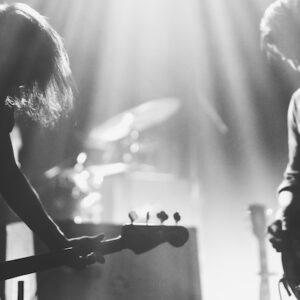 My father, a formidable wrestler and boxer, told me more than once, “Guys size each other up the moment that they meet.”...
© LitHub
Back to top