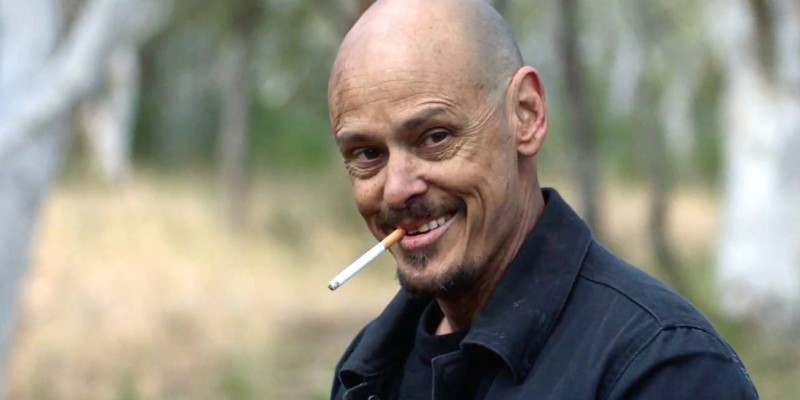 I recently chaired a panel in which several American crime writers discussed their most memorable discoveries in terms of noir television and film during the various COVID lockdowns we have all endured. As the moderator I did not get any time to discuss my own discovery, but if I had it would have been the Australian/American television production, Mr Inbetween.

Premiering on the American FX Network in September 2018, Mr Inbetween has its US fans, but remains largely unknown. For that matter, it is also criminally unseen in Australia, where it was filmed. Mr Inbetween tells the story of Ray Shoesmith (played by the show’s creator and writer, Scott Ryan), a Sydney assassin for hire. Ray works at a strip club owned by a businessman, Freddy (Damon Herriman, who Americans will recognise as playing Charles Manson in Quentin Tarantino’s 2019 film Once Upon a Time in America), and who often functions as Ray’s cut out for his criminal jobs. Ray is also a father to a daughter, Brittany (Chika Yasumura), with his ex-wife; an unofficial carer to his brother, Bruce (Nicholas Cassim), who has increasingly severe motor neuron disease; and a friend to his fellow criminal, Gary (Justin Rosniak). For around half the episodes, Ray is in a relationship with a nurse, Ally (Brooke Satchwell). There’s also a father who Ray is estranged from – why is never quite made clear – who has drifted back into his life and has Alzheimer’s Disease.

The television show was inspired by a 2005 film, The Magician, that Ryan directed, wrote and starred in. Shot over the course of a year while Ryan was a film student at RMIT University in Melbourne, The Magician takes the form of a mockumentary involving a media studies student called Max (Massimiliano Andrighetto, the only professional actor in the cast), whom we hear talking but never see on camera, following a hitman named Ray (Ryan) around Melbourne. The non-linear structure jumps back and forth between two plot strands. In one, Ray deals with a heroin addicted friend whom he suspects has become a police informant. In the other Ray drives another criminal whom he has been paid to kill, from Melbourne to Bathurst (town in central New South Wales), to retrieve a large sum of money that the criminal has hidden in a derelict house and has offered Ray in exchange for letting him live. The Magician has a similar feel to the 1992 Belgium film, Man Bites Dog. Largely forgotten now but widely panned by critics at the time as immoral, Man Bites Dog was told from the perspective of a documentary crew following a psychopathic hit man, Ben (Belgium comedian Benoît Poelvoorde) as he goes about his daily business. The crew gradually lose perspective and start helping their subject in his murderous activities.

The man holding the camera in The Magician, Ray’s neighbour, who is doing the film for a university assignment, is a restraining influence, constantly nagging Ray not to use violence and, in one instance, trying to convince him to allow the hitman’s intended target to live. But both films juxtapose the everyday, banal, often humorous conversations shared by the various parties, with sudden bursts of graphic violence as the two hitmen ply their trade. The character depicted in The Magician is much more abrasive and cockier than his television incarnation, but the film influenced Ray’s subsequent iteration in various ways, particularly the inference that he received many of his more lethal skills from being in the army for eight years, after which he was discharged for undisclosed disciplinary issues. Despite being somewhat of a cult success in Australia, it was over a decade before a version of the 2005 film was picked up as a television series by FX. This was due to the backing of brothers Joel and Nash Edgerton, founding members of the influential Australian production house, Blue-Tongue Films. Nash went on to direct all of Mr Inbetween’s first season and, in addition numerous short films, helmed the excellent 2008 Australian small town noir, The Square. Joel played The Square’s lead, and before scoring roles in America is perhaps best known as one of the members of the criminal family in David Michôd’s 2010 Melbourne-set crime film, Animal Kingdom.

Exactly why Mr Inbetween was never picked up and funded locally remains a mystery to me. More so because it captures certain aspects of white Australian culture so brilliantly, particularly the ways so many Australians converse. Mr Inbetween would have also been very at home with the Australian viewing public’s seemingly insatiable appetite for the criminal as a hero or anti-hero. Criminal characters have been a key focus of some of our best crime television: Janus in the mid-1990s, which focused on the same real life criminal family that was fictionalised in Animal Kingdom; and the 1995 documentary drama, Blue Murder. Blue Murder focused on notorious Sydney career criminal Arthur Neddy Smith and his relationship with now disgraced corrupt police detective Roger Rogerson. Partly based on the 1993 book, Neddy: The life and crimes of Arthur Stanley Smith, co-written with a Melbourne crime reporter, Blue Murder detailed Smith’s extensive cooperation with corrupt elements of the New South Wales police, whom he alleges, gave him the ‘green light’ to commit crimes for a percentage of the proceeds. And, of course, there was real-life Melbourne standover man Mark Chopper Read, whose celebrity status resulted in a slew of books about his real and imagined criminal exploits, and a 2000 film, Chopper, directed by Andrew Dominik, possibly the sharpest take on the Australian public’s fascination with real-life gangsters ever made.

Thinking about it, however, I suspect that one of the reasons Mr Inbetween was not picked up locally is that, unlike so much other Australian crime television and film, Mr Inbetween is not obsessed with either the nature of the criminal acts it depicts or the morality of its criminal protagonist. This is one of the aspects that makes the show so good. I have read of Ray’s character mentioned alongside other hitman shows – HBO’s Barry and Cinemax’s short lived Quarry, based on the books by Max Allen Collins. But perhaps the character he comes closest to resembling is Tony Soprano, although without the ever present existential self-analysis. Ray is neither hero, nor villain. Much of Mr Inbetween simply shows him going about his days, with no great overall pattern or over-arching criminal conspiracy involved, treading water in the noir anomie that often makes up so much of modern life: doing the shopping and the laundry, fielding questions from his daughter about whether unicorns are real, trying to help his brother; interspersed with his involvement in some incredibly violent and brutal crimes, which usually involve killing people for money. But sometimes they involve Ray dolling out his own form of justice. In one of the bleakest episodes, Ray is hired by dying man to find the body of his missing daughter from the convicted paedophile who was the prime suspect in her disappearance. Ray extracts a confession from the suspect and where he hid the body, then decides to extract his own retribution, which is not shown. This is another strength of the series: the 26 episodes are roughly 30 minute masterclasses in less-is-more storytelling. You are not going to have to put a month of nights on hold to watch it.

The dichotomy, sometimes obsessively depicted in crime film and television, between Ray’s vicious criminality and affection he shows to family, friends and strangers whom he believes deserve another chance, is largely unexamined in Mr Inbetween or subverted by everyday moments that range from the poignant and to laugh out loud funny. As I understand it, one of the reasons for the lengthy time between the making of The Magician and the appearance of Mr Inbetween was Ryan’s determination to play Ray, and he is brilliant in it. With his bald head, angular face, and deceptively calm demeanour, usually the only tell-tale sign of impending trouble on his part is the grin that slowly spreads across his face when someone has crossed a line or disappointed him after he has given them a second chance. The closest thing to a thematic strand the show has is Ray’s rigorous refusal, at least publicly, to examine himself. He has a code, and he lives by it, even when it takes a toll. This is brilliantly captured in what for me are some of the show’s best scenes, when Ray is sentenced to attend a therapy group for violent men. Asked by the social worker if he enjoys hitting people, Ray replies “I wouldn’t say I enjoy hitting people. If I hit somebody, I generally got a pretty good reason.”

There’s past trauma in Ray’s life: an inference of hard lessons learnt from bullies when he was young; unspoken issues with his father; his time in the army where, as he points out, he was paid to kill, whereas in civilian life he is condemned for same; and the heartbreaking decision Ray is asked to make by his brother when his pain from MS becomes too much to bear. But trauma is neither dwelt on nor emphasised. I’m not suggesting every crime show should be like this. But it is incredibly refreshing to see a show that doesn’t make trauma a core focus. Ryan confirmed it was his decision to end Mr Inbetween after three seasons in an interview in 2021. “It feels so good,” he said, “I have had enough of him.” Which sounds exactly like something Ray would say. Fair enough, but I can’t help wishing we could have more of Ray than 26 brief episodes. For now, thanks for giving us something that is so dark, so funny and so noir that also feels so very Australian. 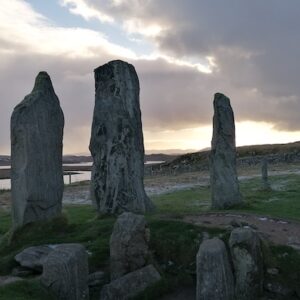 When I look back at who I was just a few years ago and who I am today, it always gives me a jolt. A lot changes throughout...
© LitHub
Back to top